Mary Lawlor and two other UN rights experts had written to the Indian government on the matter on June 11. 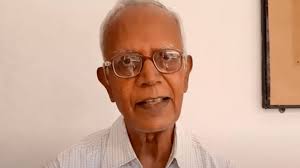 New Delhi: Nearly a month before Father Stan Swamy succumbed to COVID-19 while in custody, Mary Lawlor, the UN special rapporteur on human rights defenders, had written to the Indian government on June 11 expressing concern over the inhumane prison conditions and deteriorating condition of 15 of the 16 accused in the Elgar Parishad case (one of the accused Varavara Rao was already granted bail).

Taking to Twitter on Thursday, August 12, Lawlor said that she had kept the letter private for 60 days and given the Indian government time to respond, but the government had not yet acknowledged her letter.

Communications remain confidential for 60 days, giving the Government an opportunity to respond to the allegations.

In a note put out by Lawlor on the UN Special Rapporteur on human rights defenders’ website on Thursday, August 12, she wrote, “The death of Fr. Stan Swamy shortly after this communication was written demonstrate the severity of the conditions in which the human rights defenders are being held. It is haunting to now read how Fr. Swamy’s requests to be transferred to hospital to receive treatment were initially denied repeatedly.” Father Stan Swamy died on July 5.

The June 11 letter, which was jointly written by Lawlor and two other UN experts on human rights, drew the attention of the government to the health conditions of each of the 15 accused. It also shed light on the inhumane conditions of Indian prisons, while expressing concern over the misuse of the Unlawful Activities Prevention Act (UAPA) to target rights activists working for the benefit of minorities, Dalits and Adivasis.

“The UAPA permits the authorities to hold detainees in custody without charge for periods of up to 180 days, restricts recourse to bail and allows for prolonged detention. In the Bhima Koregaon case, it was reported that the evidence the prosecution relied on had allegedly been planted though malicious software, rendering the ongoing detention of the 15 accused as arbitrary and unlawful,” the June 11 letter had said.

In the note put up on UN Special Rapporteur on human rights defenders’ website on Thursday, Lawlor informed that four previous communications had already been sent to the Indian government prior to the June 11 letter to impress upon the authorities concerned over the health condition of human rights’ defenders. However, none of those letters received any response.