Tikri border has become a gathering of the best India has to offer. Shame on those who try to portray it otherwise. 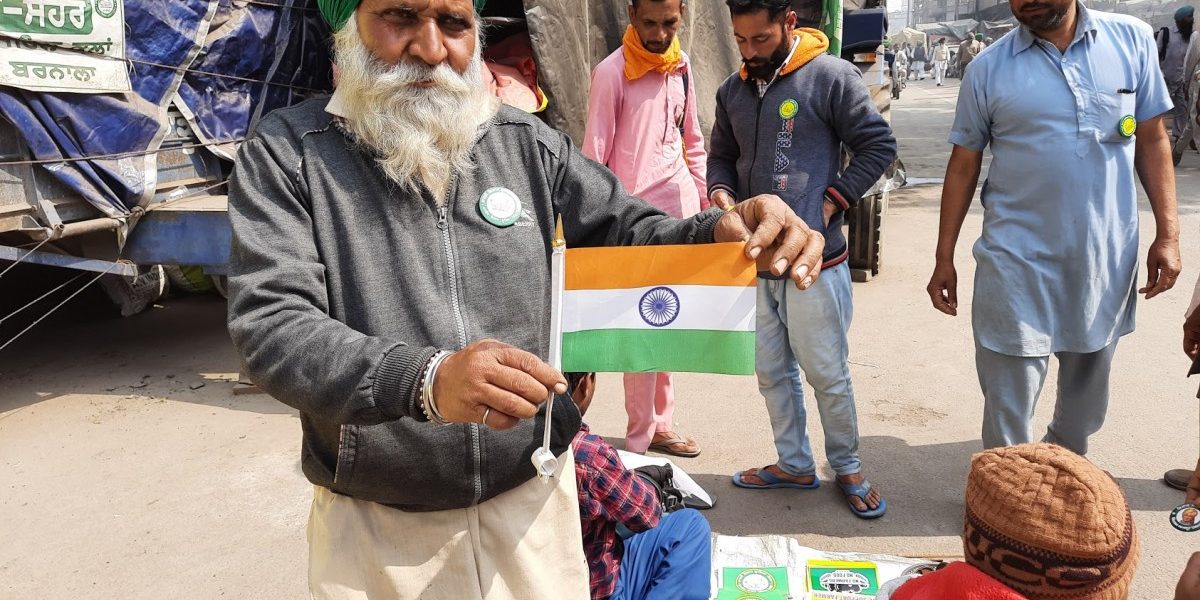 A farmer at Tikri holds up the India flag. Photo: Rohit Kumar

“Is the farmers’ protest still on?”

If I were paid Rs 1,940 for every time I have been asked that question this last month, I could have bought my own tractor by now (Rs 1,940 per quintal being the official minimum support price rice farmers are supposed to receive from the government).

The farmers’ protest is very much on and has crossed the 100-day mark. The caravan of tents, tractors and trolleys at Tikri Border, for example, is at least 20 km long and continues to grow daily. The farmers who braved the punishing winter months are now gearing up for summer, as are those supporting them.

Hemkunt Foundation, an NGO that provided tents and warm clothes at all the protest sites around Delhi over the winter months, has now set up a water filtration system by the roadside that provides 1,000 litres of cool drinking water to the farmers every hour.

Harteerath, the young man whose team of zealous volunteers has set up this reverse osmosis plant and cooling system, said, “This is probably the first time in history an entire civilisation has sprung up on a highway instead of by a river.”

He may be right. The protest does feel like a civilisation, and a rather alien one at that, considering how few in urban India even know of its continuing existence. But the blame for that must be laid squarely at the doorsteps of the mainstream Indian media who have chosen to either completely ignore the growing presence of farmers on the borders of the capital, or who have gone out of their way to tell the nation that the protest has fizzled out.

When I ask Ajit Singh from Ferozepur, who has been camped at Tikri since November 26, about this, he sighs. “The speeches from the stage wind up daily by 4 pm, so of course that area is empty after that, because everyone heads back to their tents and trolleys to cook their dinner or prepare the evening langar,” he said. ” These chaps from the godi media film the empty stage and audience area and then tell everyone the protest is over.”

He continued: “Yesterday we caught a chap doing exactly that. He begged us and told us he was only doing this because his bosses back in office had told him to. We felt sorry for him and let him go with a warning, as he too has a family to support and we didn’t want him to lose his job.”

As Ajit Singh narrated this, an old joke from the days of the erstwhile Soviet Union came to mind…

Alexander the Great, Julius Caesar and Napoleon are watching a Mayday Parade at Red Square in Moscow.

Alexander: “If I had infantry like this, I could have conquered the known world in two years instead of ten.”

Julius Caesar: “If I had battle tanks like these, I would have never have had any trouble with the barbarians.”

Napoleon: (reading a copy of Pravda, the official Soviet newspaper): “If I had a newspaper like this, nobody would have ever heard about Waterloo!”

The Indian media would have served Napoleon just as well, at least those in it who have been colour-coded “white”. According to The Caravan, “Nitin Gokhale, who was formerly with NDTV and Tehelka, and is now close to the national security advisor Ajit Doval, suggested that the process [of enlarging the government’s list of media friends] must begin by colour-coding journalists. ‘Green – fence sitters; Black – against; and White – who support’.”

The farmers at Tikri are wary of the mainstream media and the calumny and canards it is capable of spreading. In fact, Kavita Arya, a PhD scholar from Panjab University, has made it her mission to teach the farmers at Tikri Border how to answer questions about the three contentious farm laws at the heart of these protests. She showed me printouts of the laws and told me that every day she goes from trolley to trolley, educating farmers about their dangers.

“Correct information and knowledge are so important in this battle,” she said. “Once you are armed with the facts, you can answer any question honestly and simply. We have booklets in Hindi, English and Punjabi which explain these laws and their dangers in detail.”

One wishes Kavita would conduct workshops for those in Republic TV, Zee News and Times Now as well.

Anil Malik, an erstwhile NSG commando and the son of a farmer, has set up an organisation called Kisan Social Army (KSA) at Metro Pillar No. 755. He stressed the peaceful and non-violent nature of this newly constituted group.

When I asked him if the ‘Social’ in ‘Kisan Social Army’ stands for social media or society, he answered,

“Both. Change in one will lead to change in the other. Our fight is not just against these laws, but against the vichardhara (ideology) that has given them birth. We are committed to the idea of an India where all Indians have equal rights and equal dignity. The fight against these farm laws is just the beginning. We will not rest till the idea of India as envisaged by our democracy’s founding fathers and mothers is restored.”

In a day and age when cynicism about democracy reigns supreme, Malik’s intelligence and idealism are a breath of fresh air. His friend and colleague, Anoop Singh Chanot, a biochemical engineer and also the son of a farmer, told me about a school the KSA has started for the children of Tikri.

“Every day we would see children from poor families wandering around the langars asking for food, and so about a month back, we decided to start a school for them. Today, about 50 children from the ages of 5 to 15 come for afternoon school. We have volunteer teachers who come and teach them. Concerned citizens come and drop off notebooks and stationery supplies. These kids are bright and eager to learn.” 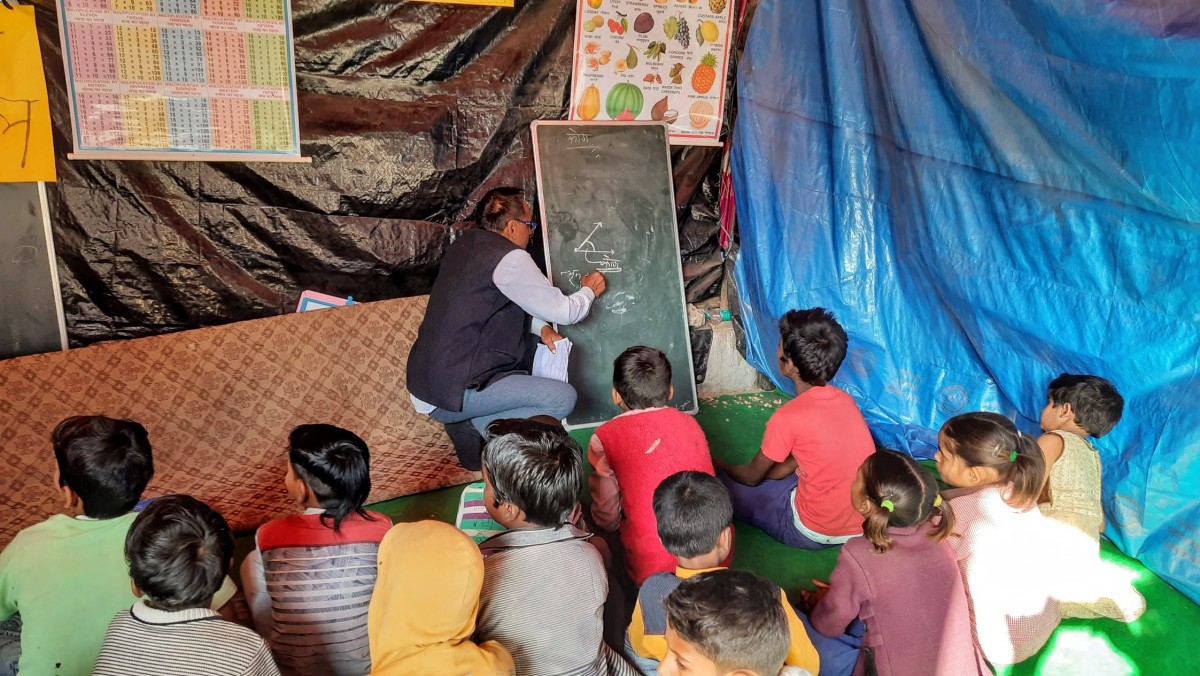 The Kisan School tent sounds like a happy place. Apart from learning reading, writing and arithmetic, the children there also learn songs, sports and social studies. A couple of high school teachers from Delhi are visiting the school and have given the kids hygiene packs containing toothbrushes, toothpaste, soap, combs and towels. They are teaching them a song on cleanliness that the children sing along with gusto:

Clean water, hygiene, a focus on knowledge and facts, free food for all and a school on the street for underserved children – all run and organised by brave and resilient people who believe that India belongs to all, not just a privileged few.

Tikri border has become a gathering of the best India has to offer. Shame on those who try to portray it otherwise.