Ground Report: 'Police Put up Barricades on Decided Routes, How Could We Follow Them?'

At Nangli and Chhawala, a clearer picture emerged of why farmers found themselves lost or stranded in an unfamiliar city. 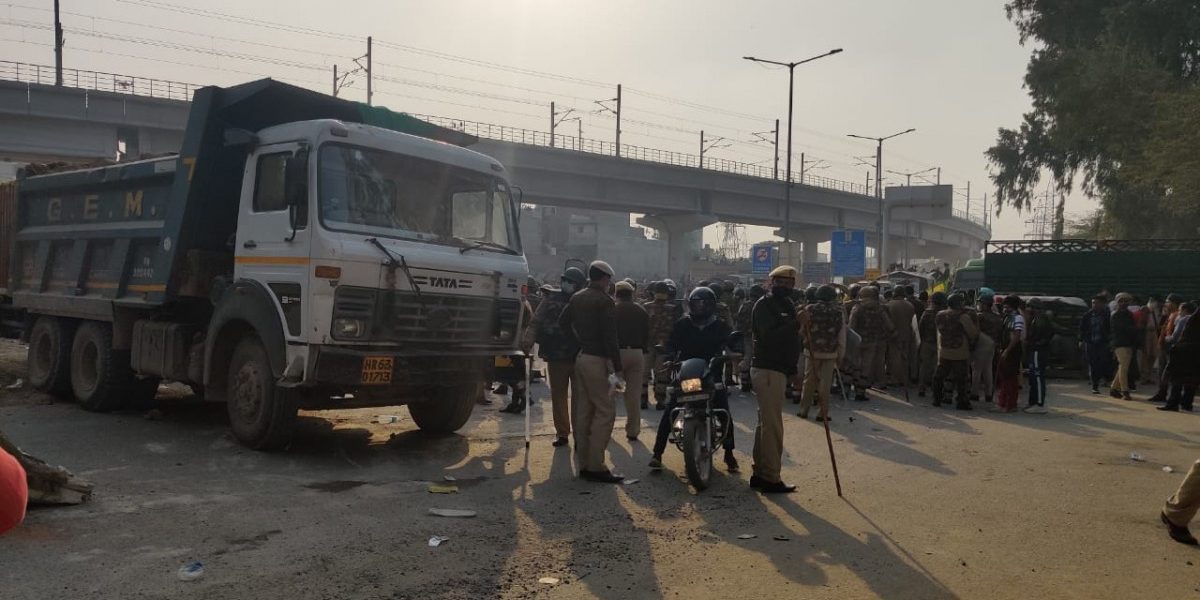 New Delhi: The farmers’ tractor rally on Tuesday, January 26, shifted the gaze of the media to those areas of Delhi which have, until now, only aspired to be seen as parts of the National Capital.

The densely populated settlements and snaking, narrow lanes of Chhawala, Nangli, Nangloi, Barwala, Najafgarh, Baprola and others such areas form what is often dismissed by power keepers and real estate brokers as “rural Delhi.” With the exception of a few older residents, who also own most of the land here, these areas are populated mostly by lakhs of migrant workers.

On Tuesday, as Prime Minister Narendra Modi presided over the customary Republic Day parade at Rajpath, overlooking the Rashtrapati Bhavan, the Parliament building, the India Gate, and the war memorial – a recent marker of the BJP regime – residents of outer Delhi were largely awaiting the farmers’ rally.

“We have never seen such arrangements in these parts. Members of the media, police, administration – all sorts of officials are doing the rounds here,” Ghanshyam Gaur, a resident of Baprola village told The Wire. 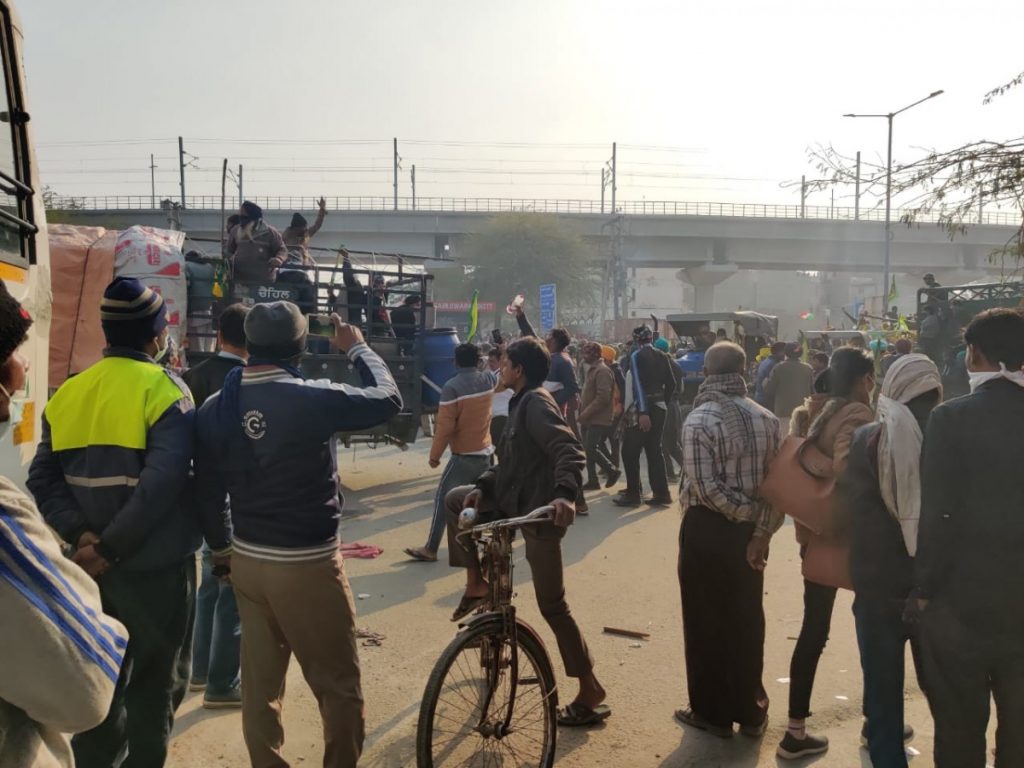 Most people in these neighbourhoods profess an understanding of the situation surrounding the Centre’s farm laws and the farmers’ protests against them for the past two months.

“The situation should not have come to this point. The government should have consulted the farmers before passing the laws. Even now, it could have done something. The farmers are sitting out there in the cold,” Gaur, a grocery shop owner, said.

‘What is this place?’

At the Chhawala bus stand near which the tractor rally by farmers who had been protesting at the Tikri border was supposed to pass, had a crowd of people who had come to see the tractors pass.

The main rally never passed through the area and it was only when the gathered people started leaving that around 10 tractors suddenly emerged. The huge police contingent posted at the junction suddenly became alert.

Farmer unions had anticipated a minimum of 1,000 tractors in each rally, so the sight of none may have surprised the farmers who had reached Chhawala. A few of them got down from a tractor and asked around, “What is this place?”

It turned out that these 10 tractors had followed the route that had been initially decided upon, but most others had got lost on the way from Tikri to Najafgarh. Realising that they had to join the main rally, the farmers made hurried phone calls and rushed towards Nangli Diary bus stand.

This bus stand is around five kilometres from Chhawala and is a tri-junction which opens to the largely middle-class gated colonies of Dwarka. The bus stand is surrounded by the National Capital’s longest drain, the ‘Bada Nala’, on three sides. 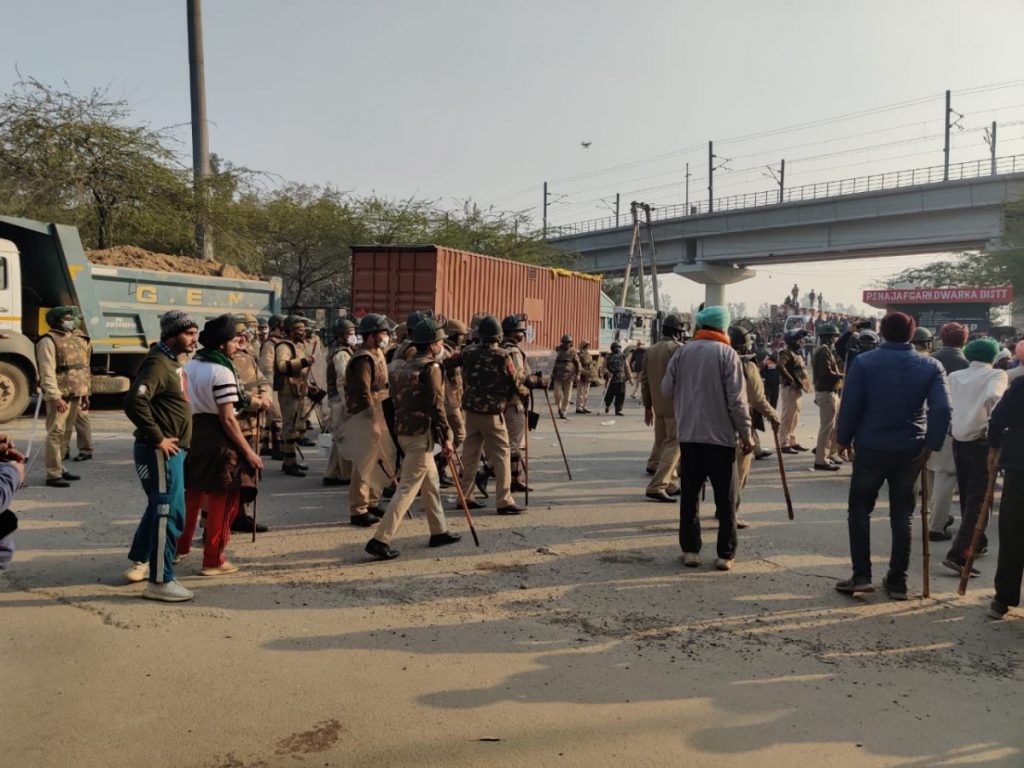 Here, police waited for the rally with tear gas shells, armed units and a riot contingent. As more people got to know that the tractor rally would pass through Nangli, they started gathering behind the police vans.

Meanwhile, police turned the five-kilometre stretch into a fort, making it impossible for any one to get in or out. Hundreds of vehicles were stranded as a result, with police offering protesters no assurance on when the barricades would open.

That the rally had finally arrived became evident when police started firing tear gas shells to disperse the crowd. A section of the crowd responded by throwing stones at the police vehicles.

This is when a group of elderly farmers stepped in and requested police to let them pass. “There are hundreds of tractors. They can’t go back now. We want to return to Tikri,” said a farmer to the ACP on duty.

By then a group of young men, visibly agitated by the tear gas shelling, forced themselves through the police cordon and broke open the barricades. Some got into a bus, which the police had parked tactically to block the way. Within minutes, a group had somehow managed to start the bus, drive it a little way and park it near the adjacent drain, thus opening a way for the tractors to pass. 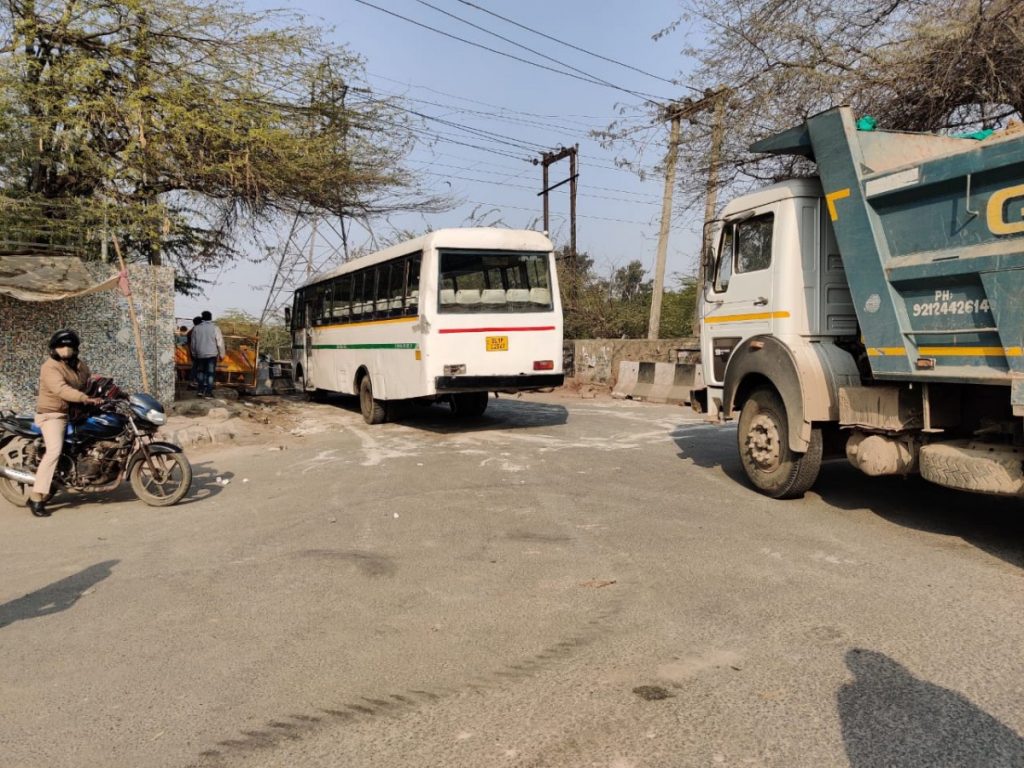 The bus parked across the bridge over the drain at Nangli, during the farmers’ tractor rally on January 26. Photo: Ajoy Ashirwad Mahaprashasta/The Wire

Police personnel had, by then, given up and stood by the side of the road to let the rally go. What could have been a major violent clash between police and farmers was somehow prevented by quick thinking on both sides.

Once the rally got going, it seemed that it would not end at all. Most tractors had the tricolour, the Nishan Sahib and the flag of the Bharatiya Kisan Union aloft. Participants of the rally were vocal with loud patriotic songs. Every tractor was packed to the hilt by men, women, the elderly and the young. Rally participants were perched and standing on the roofs as well. Posters demanding the repeal of the farm laws were stuck on every other rally vehicle, marking the protesters’ intentions clearly. 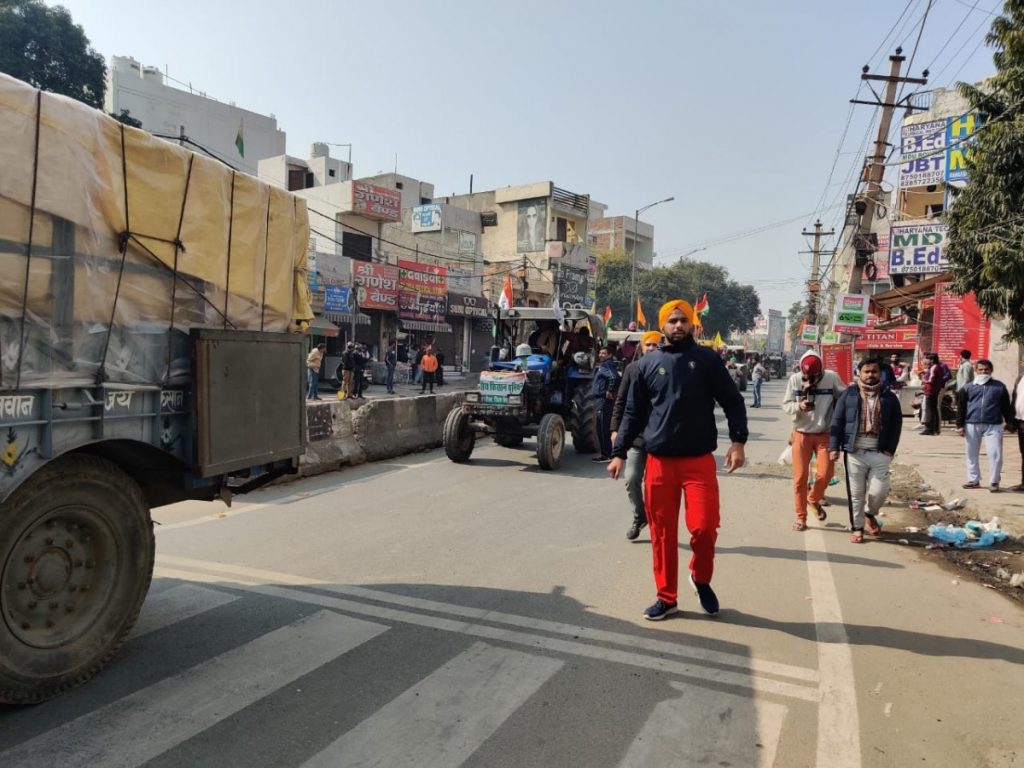 As people stood and watched, half an hour passed but the tractors kept coming. Slogans of “Kishan Ekta Zindabad” or ‘long live farmers’ unity’ had filled the air. A few among the crowd took on the responsibility of keeping the spectators off the road and the tractors on their path.

“Why wasn’t the decided route followed?” this correspondent asked one such person attempting to direct the tractors.

“The rally followed the pre-approved route. But constant barricades on this approved route became a nuisance for us. Once the barricades were broken, there was chaos and the rally couldn’t follow the same route. Most of us do not know our way around Delhi. Even we are struggling to find our friends,” said the farmer.

He added that it was infuriating that police, having already decided upon a route with farmers, had chosen to set up barricades on that very route.

‘Asked to put barricades an hour ago’

The Delhi police, on the other hand, had a visibly tough time dealing with last minute arrangements to block the Tikri border rally. Top officials constantly patrolled along the blocked ways, and directed officers to keep a tight vigil. 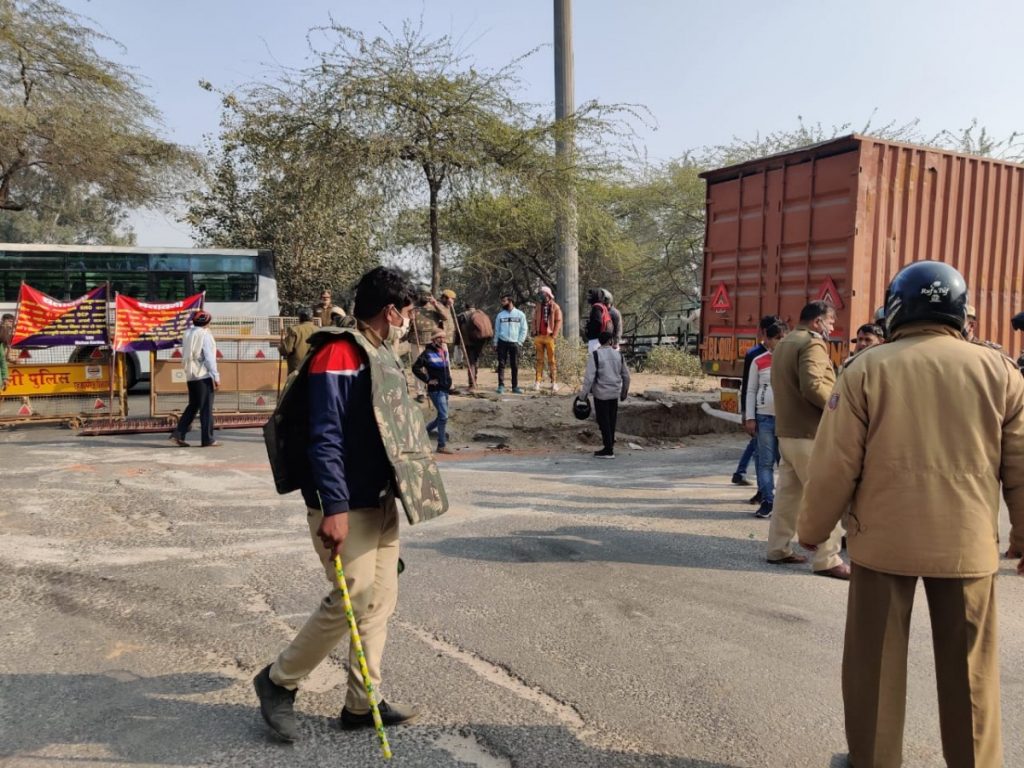 A member of the Delhi Police personnel in special gear at Nangli on January 26. Photo: Ajoy Ashirwad Mahaprashasta/The Wire

But those who were on the spot had a difficult time. “What should we do? They are so many tractors. How are we supposed to control them? We were asked to put these barricades only an hour ago,” said a junior policeman, who was asking bystanders to leave the spot.

A witness to the altercation at Nangli was understandably angry at the way the rally was handled. “I could see that the farmers just wanted to cross the Nala and return to their camps. There was no point of a barricade here. Many of us also got stranded for no reason. No farmers got into any fight with police, so why should they be attacked?” said Ramlal, a migrant from Bihar who said that he was also a farmer.

When the farmers’ rally ultimately overcame the barricades, there were hundreds like Ramlal who joined in the rally with their vehicles just to avoid further traffic and reach their homes on time.

On the other side of the Nala, Dwarka appeared unperturbed.