One of the victims – whose rented house was burnt along with all documents during the riots – was denied compensation which was usurped by her landlord, a cause of faulty verification at the hands of the authorities.

New Delhi: Musarrat, a widow and mother of four, has lost all hope of receiving compensation promised to Delhi riots’ victims. Her eldest daughter Bushra (20) lost all her documents and study material in the fire and vandalism that damaged the entire building where she and her family had lived on rent for a year and a half.

“All our books, household stuff, documents, everything got burnt in the riots, and my father’s hard work reduced to ashes.”

A day before the riots, the family had moved to Musarrat’s mother’s house due to her pregnancy. After they heard that their house had been damaged, they went to collect their leftover belongings; however, rioters had reduced their lifetime of hard work to mere burnt scrap.

Puneet Patel, SDM Karawal Nagar, acknowledged that Musarrat’s landlord claimed financial assistance and now she is refusing to share a part of the compensation claimed by Musarrat’s family. Patel said that he would only be able to recover the compensation amount from the landlord and allot it to Musarrat, if she is able to prove her residency on that address through documentation.

Also read: ‘Only His Shoes Survived’: Victims Struggle to Recover From Horrors of Delhi Riots

“Why is sincerity expected only from officers, why not from the people?” Patel asked, adding that now it depends on the landlord if she is willing to write an application saying that Musarrat was her tenant, and share the assistance claims with her on humanitarian grounds.

In Shiv Vihar, many families live in rented accommodations with monthly rent ranging between Rs 2000-4000, and in most cases, rent agreements are not signed. In such cases, property owners let out their building premises considering references, goodwill or community ties. In Musarrat’s case too, there’s no rent agreement or any documentary proof to ascertain that she was a tenant at the said property.

Therefore, in the absence of Musarrat’s family at the property and lack of verification documents, the landlord was able to usurp part of the financial assistance meant for Musarrat’s family. 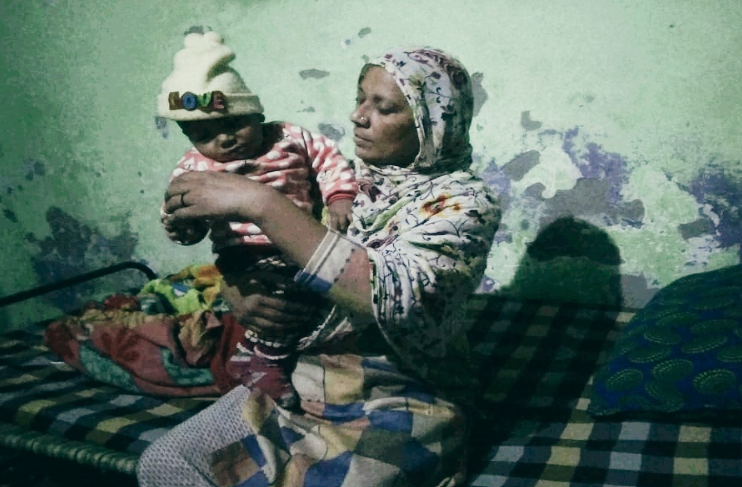 Musarrat with her six-month-old child Rayyan, at her home in northeast Delhi. Photo: Tarushi Aswani

Musarrat’s six-month-old son Rayyan has developed breathing issues and her other two school-going children Junaid and Shumaila have been struggling to arrange for school fees in a raging pandemic, while Bushra has returned hopelessly many times from the SDM office. On the brink of collapse, Musarrat’s family is currently residing in a rented room in Babu Nagar – the rent of which seems unmanageable since there is no earning member in the family.

Since the riots Musarrat had been living with her children at her mother’s place and has been surviving on all the help received from NGOs and relatives.

Often caught between dilemmas, Musarrat has to decide whether to buy Rayyan’s medicines or pay Junaid’s fees. She shares how she has to pick the needs of one child over the other and pick one food item over the other – whichever would fill her family’s stomach for a longer time.

“After our house was burnt, we were only left with the clothes we were wearing; birth certificates, Aadhaar cards, Bushra’s class 12th marksheet – the riots ate up everything.”

On February 25, rioters climbed up Tofik’s building in Ambika Vihar, yelling “Mullo(n) kay ghar dhoondo”. What began as a chase, ended up in rioters running after Tofik up to the terrace of the building, pushing him from there to fall onto another building, leading to a fracture in his right leg and injuring his left one.

At GTB Hospital Tofik had received Rs 20,000 rupees immediate relief from the Delhi government when he was admitted back then. However, he has been taking loans from people for his treatment at a private hospital due to lack of monetary assistance.

Tofik is a street hawker who sells locally made materials on pavements in weekly markets in northeast Delhi. Since nine months, Tofik has been slowly selling off his personal belongings to feed the family of five. “My legs don’t function properly which were fractured during the assault, my daughter had to quit school and whatever loans I take only provide for my treatment and household expenses.”

Saukat Ali, who was returning from Loni on February 25, was shot in his left thigh when he crossed Chaman Park’s Aqsa Masjid. All he remembers is a crowd chanting ‘Jai Sri Ram’ slogans and aiming burning glass bottles at the people near the area.

Saukat, father of three, was a machine operator and could stand for 16 hours a day before the injury. Now with the bullet wound, he cannot stand as many hours working and this has severely affected his working capacity.

Although he has been offered immediate financial assistance by the government, however in his case, this has not been enough to compensate for the lost abilities, which caused his 13-year-old daughter to quit school and left the family to survive on relief aid provided by NGOs and relatives.