The context of Kalburgi’s life's work – and the likely context of his death – is the fraught cultural politics of the Lingayat community in Karnataka. 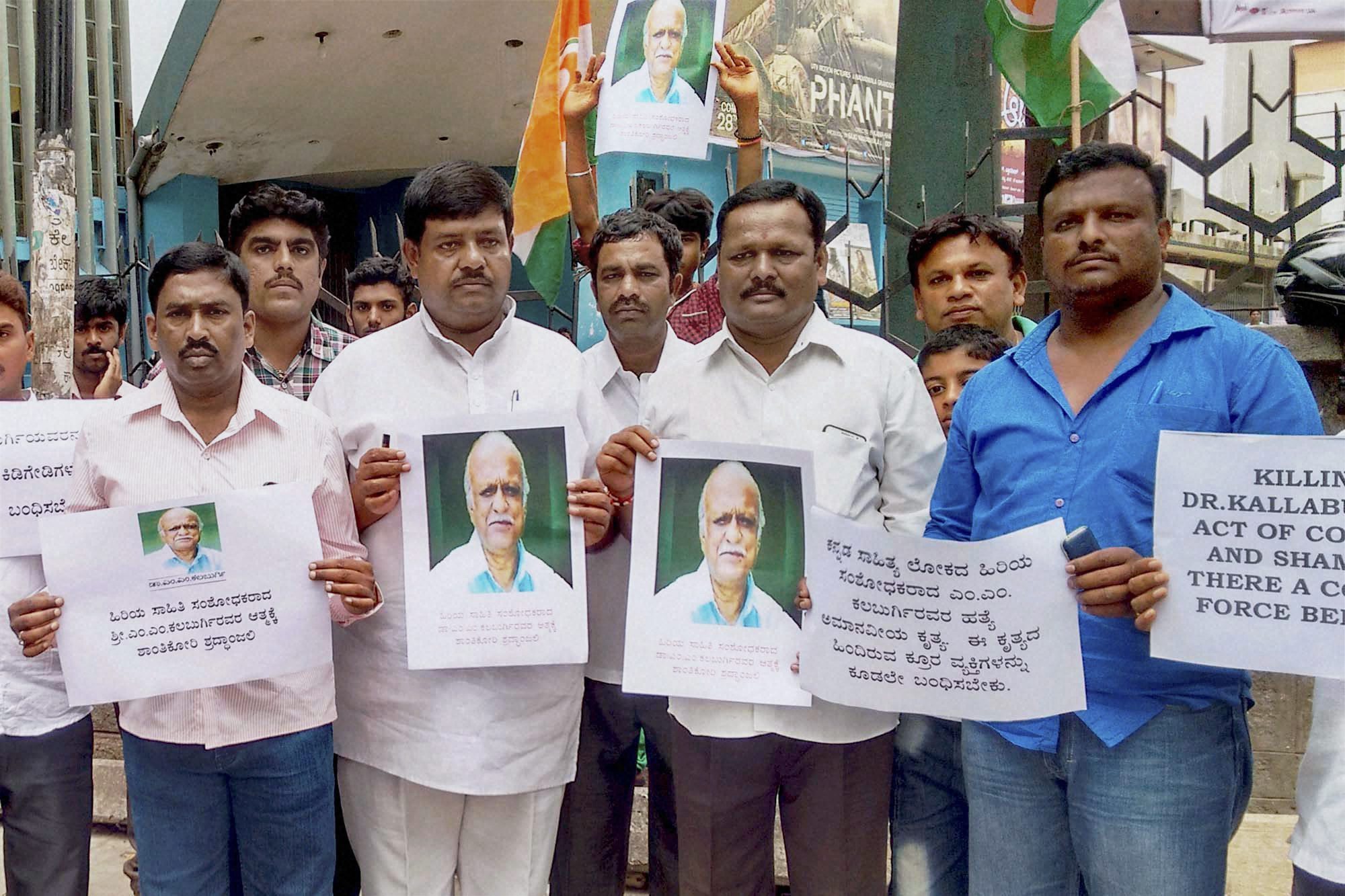 Youth Congress members protest against the killing of former Vice-Chancellor of Hampi University M M Kalburgi who was shot dead at his Kalyanagar residence by unidentfied gunmen in Dharwad on Sunday. Credit: PTI

Bengaluru: The esteemed literary scholar M M Kalburgi was shot dead outside his home in Dharwad today, producing a wave of speculation on the identity and motive of his killers. Kalburgi died in hospital after being shot at close range by two assailants, who arrived at his doorstep at 9 am on Sunday morning.

Gatherings to condole his death, and demand justice for his murder, took place across Karnataka including at the Town Hall in Bengaluru, where outrage over the crime was mixed with ambivalence over who might be behind it.

At the Town Hall, many supporters had turned their suspicion on unspecified right-wing forces, and some were already comparing Kalburgi’s murder with those of the rationalists Narendra Dabholkar and Govind Pansare in Maharashtra. Others present cautioned against jumping to any conclusions.

The context of Kalburgi’s life’s work – and the likely context of his death – is the fraught cultural politics of the Lingayat community in Karnataka. Kalburgi, a former vice-chancellor of Kannada University, was a progressive voice among the Lingayats, the middle-caste group that dominates state politics.

The Lingayats originated as a social movement led by the 12th century philosopher Basava. The founding literature of the movement is in the form of vachana verses, of which Kalburgi, as a scholar of Old Kannada, was a leading authority. As a result, Kalburgi’s work had implications not only for the theology of the Lingayat establishment, but for its enormous political and financial power.

Kalburgi frequently riled the Lingayat orthodoxy, most memorably in 1989, when he completed a study of the vachanas of Neelambika, Basava’s second wife. Kalburgi linked them to a minor myth in which Basava, unable to refuse anything to a supplicant, gave away his second wife to a Jangama sanyasi. According to Kalburgi, Neelambika’s own vachanas suggest that she and Basava did indeed cease their conjugal relationship. Another controversial claim was about the virgin birth of his nephew, Channa Basavanna, who took over the leadership of the movement. Conservative Lingayats were outraged and Kalburgi received death threats; eventually, he was forced to apologise and retract his statements. File Photo of Former Vice-Chancellor of Hampi University, M M Kalburgi who was shot dead at his Kalyan Nagar residence by unidentified gunmen, in Dharwad on Sunday. Credit: PTI

More recently, Kalburgi has declared that the Lingayats cannot be called Hindus – attracting the hostility of the RSS (the Lingayat vote was crucial to the election of the first BJP government in Karnataka in 2004, and its first chief minister, BS Yeddyurappa, was a Lingayat). In June last year, Kalburgi dismissed the sanctity of religious idols, which brought protestors from the Bajrang Dal and VHP to his doorstep. Kalburgi was placed under police protection.

At the Town Hall, some speakers referred to posts on Facebook and Twitter, posted by activists of the Bajrang Dal right after the news came out, which openly celebrated Kalburgi’s murder.

But according to professor K M Marulsidappa, Kalburgi’s murder is less likely to implicate conventional Hindutva groups, and more likely to involve the fine rivalries and high political stakes within Lingayat caste politics.

Speaking to The Wire, Marulsidappa explained that Kalburgi’s work had touched on sensitive questions that divide mainstream Lingayats from the minor subsect of Virashaivas, who believe that their tradition precedes Basava – and blame him for the degradation of the movement. The Virashaiva community is led by the Jangama priesthood from five seats, the panchapeetha. Kalburgi’s work had provoked intense hostility from Jangamas and extremist factions behind them.

Marulsidappa pointed out that Kalburgi’s murder followed the murder of Linganna Satyampete, a journalist believed to be Kalburgi’s disciple and supporter in the district of Gulbarga (Kalbargi’s surname is derived from the name of the area). Satyampete’s body was found semi-naked in a drain in Gulbarga town on July 26, 2012. He was also a fierce critic of conservative elements in the Lingayat mathas (religious schools), whom he accused of abandoning the true spirit of the vachanas.

The scholar M.  Chidananda Murthy, seen as a conservative rival of Kalburgi’s within the community, also spoke at the Town Hall meeting. He said he had often disagreed with Kalburgi but never lost respect for him.

M S Asha, who is currently editing a translation of Kalburgi’s writing, told The Wire that she had spoken to him the previous morning. They chatted about his play on Basava, The Fall of Kalyana, translated by M C Prakash; Kalburgi mentioned a critic’s comment , comparing the play to a verse drama by T S Eliot, Murder in the Cathedral.

He also discussed his next work, which would examine the disappearance of women writers from the Kannada canon between the 12th and 16th centuries, that is, in the period that the vachana tradition was suppressed and the priestly class established its hegemony among Lingayats.

Kalburgi was a key organiser of the Dharwad Sahitya Sambramha, or the Dharward Lit Fest. As an example of his liberal mind, Asha said, he invited the controversial right-wing author Bhyrappa to the festival. “When everyone questioned him, his only answer was – ‘He is a writer too’.”

The overarching concern expressed at the Town Hall in Bengaluru was that a culture of lethal violence might overwhelm the hallowed culture of discussion and questioning in Lingayat society. Indeed, one of the first victims of the temptation to violence was Basava himself – martyred at the end of the celebrated period of social reform, when he was thought to have gone too far by marrying a Brahmin girl to a Dalit boy. One protestor on the Town Hall steps had evidently thought of this: “Yesterday Basavanna”, his sign read, “Today Kalburgi.”