Far from waging ‘CoronaJihad’ as some right-wing politicians are alleging, the Jamaat is anathema to the Salafi ideologies of organisations like Al Qaeda and ISIS, who condemn it as having destroyed Islamic jihad. 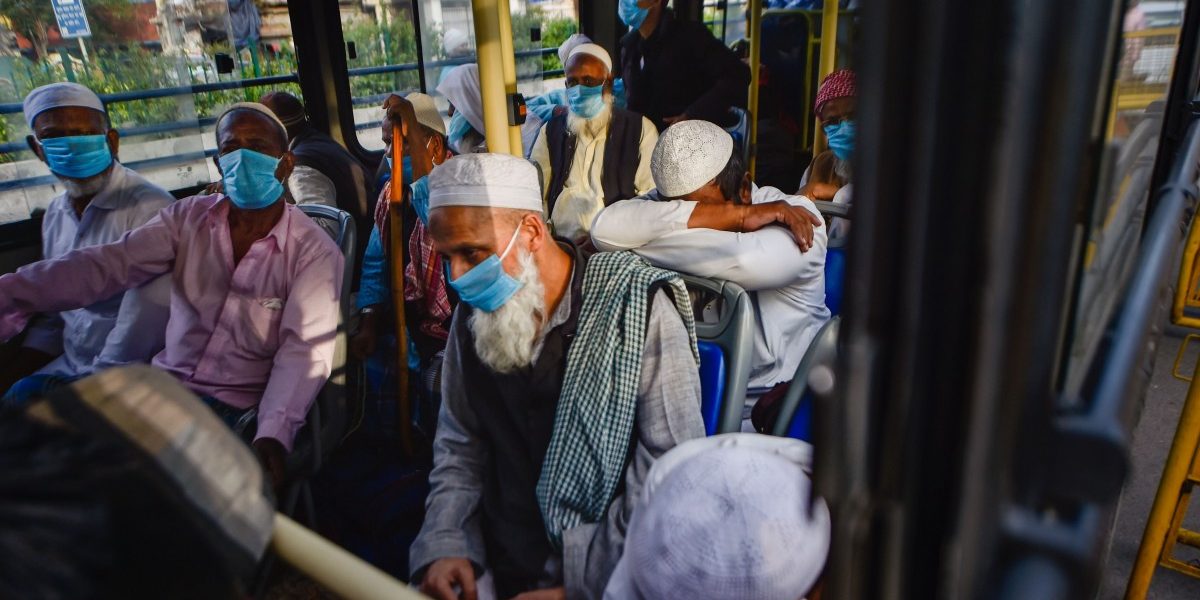 If there is one thing that does not define the Tablighi Jamaat, it is jihad as we know it in our times, a phenomenon that is better called suicide-murder. Nonetheless, social media posts went viral, many with inflammatory accusations, verbal and visual, under the hashtag, #CoronaJihad, in the wake of some two dozen cases of COVID-19 having tested positive in Nizamuddin West.

As I watched speakers on most television channels I realised the extent of mis-information regarding Muslims, the Tablighi Jamaat and even Nizamuddin. We live down the road from Basti Nizamuddin, one of the few neighbourhoods in Delhi that still remains an area of Muslim concentration after Partition. Much of it is a slum with narrow lanes and poor municipal upkeep.

Incredibly, in this very locale there are minimally three languages of Islamic religiosity. There is the Dargah, centred around the mausoleum of Nizamuddin and associated with the Chishti Sufi lineage that draws large numbers of Muslims and Hindus who seek succour for their suffering from Nizamuddin Awliya (1238-1325), who is Mahbub-i-Ilahi, the beloved of God and the saint of love.  After the Ajmer Dargah of Muinuddin Chishti, Nizamuddin is the most popular pilgrimage for Muslims. The neighbourhood is appropriately named after him as he came to live here said to have been directed in a dream to go to the village of Ghyaspur. The Dargah is rightly celebrated for its association with the poetic creativity of Amir Khusrau but also with Mirza Ghalib, preeminent Urdu poet whose Sufi proclivities are less well known. The Dargah has a well-known tradition of celebrating the Spring festival of Basant and each year the filmmaker-writer Muzaffar Ali commemorates the Sufi-disciple duo with his Jahan-i Khusrau festival, a tribute to the magic of this sacred centre by the Yamuna, itself a river of love (‘Yamuna dariya prem ka’). Delhi (Dilli) was famously known for its two courts, the imperial-political darbar of the Sultan and that of the Sufi, eclectically non-political.

The second Islamic language in Nizamuddin is also Sufi and associated with the Dargah of Inayat Khan, named after Hazrat Inayat Rehmat Khan Pathan (1882-1927) who emphasised the inner life of the Sufi shaped by a spiritual guide. Inayat Khan crafted a universal religion inspired by the great Andalusian Sufi thinker, Ibn ‘Arabi (1165-1240) who was against exclusive monotheism and against confining oneself “to a particular belief and denying all else, for much good will elude you – indeed, the knowledge of reality would elude you. Be in yourself for all forms of belief, for God is too vast and tremendous to be restricted to one belief rather than another” (cited in Pir Vilayat Inayat Khan, Awakening – A Sufi experience).

The third language is that of the Tablighi Jamaat, which I first learnt about during my fieldwork among the Mewatis. It had by the 1980s become a global operation working in some 150 countries and I was astonished that there was hardly any cognisance of this transnational religious movement in the social sciences. Mewat had been the first theatre of the Tablighi Jamaat experiment devised by Maulana Muhammad Ilyas in the 1920s.

Also Read: When Even a Pandemic Is Communalised

Maulana Ilyas’s nodal contribution was primarily to shift the responsibility of preaching from Muslim clerics to ordinary, even illiterate Muslims. He first taught a few Mewatis at Nizamuddin’s Banglewali Masjid, now the site of the Islami Markaz. His letters, however, report his dejection as despite his persistent teaching the Mewatis refused to keep beards or perform the namaz prayer and preferred what he saw as their jahilliyat (primitive state). It was only when Partition saw a genocide wreaked by mobs on Mewatis that they turned to this mode of religiosity. Hitherto they could be described as Hindu and Muslim in their celebration of Id and Govardhan Puja and the veneration of the cow (being both peasant and pastoral). At their camps, Tabligh volunteers told them the violence happened because of God’s azab (punishment). As one Mewati told me, We decided then that it was better to ride one single horse.

The Tablighi Jamaat can be held responsible for many things. For socio-cultural distancing –  like its Hindu counterparts, the Arya Samaj and the Vishwa Hindu Parishad – the Tablighi Jamaat is committed to the modern idea of religion that is about singular belonging. It is also deeply conservative. Its hugely popular major text, the Tablighi Nissab, emphasises ritualist Islam focused on six principles including the kalima (profession of faith), salat (namaz performed five times a day), ilm-o-zikr (remembering God).

The Tablighi organisation is also hierarchical. Despite Islamic egalitarianism the leadership continues to be hereditary, having been restricted to the Kandhlawi lineage of Maulana Ilyas. His own son, Maulana Mohammad Yusuf Kandhlawi (1917-1965) was associated with the internationalisation of the Tablighi Jamaat. Gujaratis and Mewatis do have significant authority within its structure.

The Tablighi Jamaat defines its purpose as Islami da’wa or Islamic proselytism, demonstrating how Christianity and its missionary spirit has become a role model for most world religions. The organisation works through ordinary Muslims committing ideally 40 days time annually for chilla – to participate in group jamaats that might walk or travel by road, train and air. Camping in mosques in cities and villages, the jamaat, led by an amir, invite Muslims to learn to be “better Muslims”.

In the media, there have been repeated references to ‘why a Markaz was held’. The Markaz is not an event but the global headquarters of the Tablighi Jamaat from where the jama’ats depart and return. Within the building, there is space to host some 10,000-12,000 persons.

The conservatism of the Tablighi Jamaat largely draws upon the theology of the Deoband seminary, which it reduces to a further capsule form. For them, none of the grand debates of Islamic thought of an Ibn Rushd (1128-1198) fired by Aristotle’s rationalism. They denigrate also the mystical-sensual practice of the Dargah.

Nonetheless, the Tablighi Jamaat’s conservatism works as a bulwark against radical Islam, at least in India, even though the story in Pakistan, Afghanistan and elsewhere is quite different. Maulana Ilyas emphasised the Jihad-i Asghar, the Greater Jihad that is the battle over the self. The Tablighi Jamaat’s claim to be non-political ostensibly comes from its effort to keep a distance from ruling regimes, hence it is anathema to the Salafi ideologies of organisations like Al Qaeda and Daesh (ISIS) who condemn it in no uncertain terms as having destroyed Islamic jihad. There are occasions when it has been infiltrated or its adherents have been radicalised but that is largely exceptional and also happens because of its openness.

The Tablighi Jamaat’s annual meet, or ijtima, was held earlier on February 24 near Delhi’s Sadar Bazar. There are reports of a quarterly meeting from March 13-15 at the Markaz in the media but these have been denied by Tablighi officials. On March 19, a Janata curfew was declared for Sunday, March 22 and a national lockdown on March 24 at 8 pm. By then, it has been reported that the Tablighi Jamaat administration had already sent 1500 persons home but 1000-1200 remained and needed passes to transport them in vehicles.

Clearly, the inward-looking stance of its current head, Maulana Saad, also prevented him from realising and responding proactively to the global health crisis. There are recordings of him actually playing down the threat from the coronavirus. That there was gross failure and irresponsibility on the part of the Markaz administration is undeniable; but could not the state have anticipated this with the ever-deepening surveillance at its command?

Shail Mayaram is author of Resisting Regimes: Myth, Memory and the Shaping of a Muslim Identity (Oxford University Press, 2017, 2nd edition) which discusses the Tablighi Jama’at.