Six months ago, UP’s Anti-Terrorist Squad arrested Mohammad Umar Gautam from Delhi’s Jamia Nagar on 'forced religious conversion' charges. However, the converts who were guided by him tell a different tale. 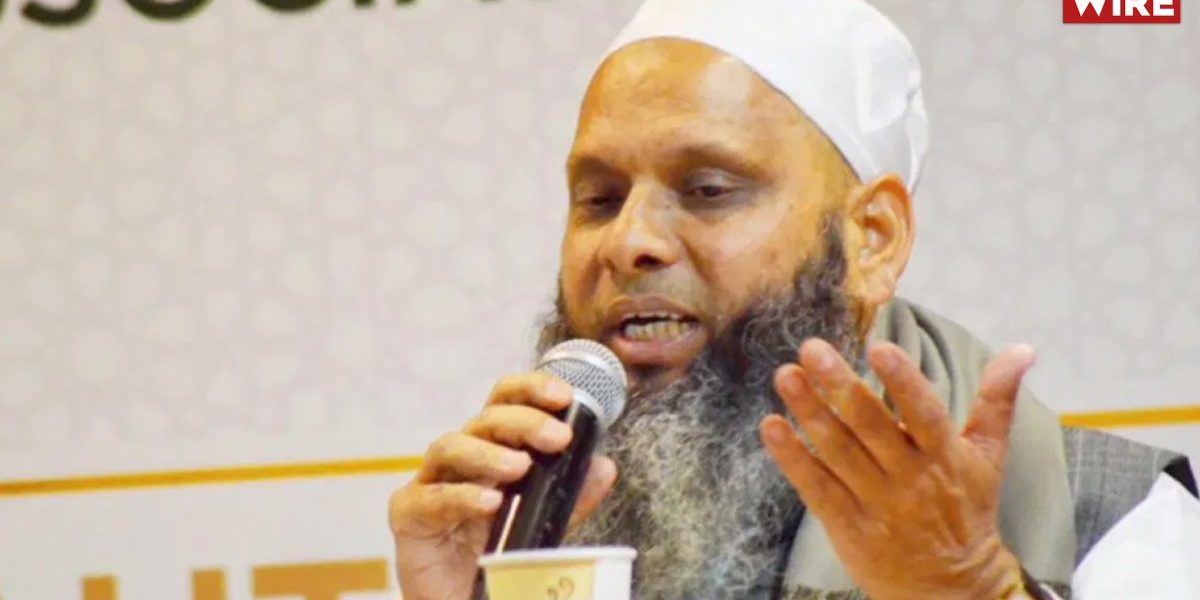 New Delhi: ‘Dharmantran’ or conversion as a phenomenon in India has claimed a greater space in public, political and policy parlance ever since the Narendra Modi government came to power in 2014.

In its chargesheet filed on August 13, the UP ATS alleged that Gautam and others “were using psychological pressure for forceful conversions”, as part of their plan to “set up an Islamic state” and received funding from different countries to carry out conversions. They also alleged that those arrested were involved in “forced conversion” of about 1,000 Hindus.

On November 7, the UP ATS also arrested Gautam’s son Abdullah Umar in connection with the alleged religious conversion racket.

While the ATS scripted a story of 1,000 conversions, the flakiness of the plot began unravelling itself in June, when Praveen Kumar, a self-proclaimed “Hindu nationalist” who authored books on Prime Minister Narendra Modi and UP chief minister Yogi Adityanath, appeared on the alleged conversions list. On June 23, the ATS knocked on his door looking for ‘Abdul Samad’ after the leaked list of alleged converts had his name.

Later, Kumar, a PhD scholar, walked over 200 kilometre on foot from Saharanpur to Delhi to reach the Supreme Court with a petition to “reclaim his honour”, saying that after the Hindu scholar’s name mistakenly appeared in ATS’s conversion list, his village folk began calling him a “terrorist”.

In these six months, firebrand anchors of right-wing media channels have collectively assassinated Umar Gautam’s character as someone who indulged in ‘Conversion Jihad’ and labelled him as a ‘Factory of Conversion’ even as the ATS is yet to find any individual who claims to have been “forcefully” converted by Gautam. Converts who were guided by Gautam, however, tell a different tale. During this time, various converts took to social media to defend Gautam and to let the world know that it was only legal guidance that he shared with them.

Many Muslims converts come forward to prove they accept Islam by their own choice No one has Force them#ReleaseUmarGautam pic.twitter.com/oBfuBUY7D6

Abhishek Says No one is Small Child No one Can Convert Forcefully I Have Accepted Islam on My Own Denies All Allegation on Umar Gautam and Mufti Jahangir Sahab #ReleaseUmarGautam pic.twitter.com/TEpKF0ds1O

This young lady from Delhi embraced Islam on her own in 2012.

A year later in 2013, she approached Maulana Umar Gautam and his organisation to formalise her change of religion. #StandWithUmarGautam #ReleaseUmarGautam pic.twitter.com/SKBqC3uQEa

The Wire spoke to five such converts.

“He helped me at my weakest”

A Hindu priest, Kappala N. Raju, at a temple in Uttar Pradesh’s Hastinapur, said Islam made its way into his heart as he set out to find his connection with the creator in 2012.

As Kappala’s family and relatives decided to boycott him, he further toughened his stance and decided to legally convert to Islam.

Also read: Reviving the Debate on Indian Secularism in the Age of Religious Nationalism

After reading about Hinduism, Jainism and Christianity, Kappala became Mohammed Abdullah in 2014. While he had managed to get his own conversion papers, he sought help from Gautam for his wife’s conversion papers. “Banda ameer hoga, faqeer hoga, lekin Umar sahab kisi ko bhi nazarandaaz nahi kartay, unkay ghar ka darwaaza sab ke liye khula rehta hai (Whether the person is rich or poor, Umar sahab would never neglect anyone who arrived at his door)”, said Abdullah as he recalled the first time he met Gautam in 2014.

Umar Gautam, who converted to Islam in 1984, is a well-known public figure who helped those with no knowledge about the legal formalities needed to become a Muslim. When Abdullah met Gautam, he had been surviving on water since he had no money left to procure food. It was either him or his wife, only one of them could eat out of the money they had. Gautam not only aided Abdullah with the guidance to pursue his wife’s conversion formalities, but also hired him as a driver, even when he didn’t need one.

“Being boycotted by my family, my financial resources ran out. Had Umar sahab not been there, I don’t know what would have happened to us,” said Abdullah. While he had spent extensive time understanding idol worship and decoding the ritualistic and superstitious aspects of Hinduism that bothered him, his family, he said, had raised him with the “us” and “them” narrative about Muslims and Hindus, where Muslims were demonised as ‘cow eaters’ and as ‘unclean folk’.

However, he said, Gautam had cared more for him than his own family could ever have. His decision to convert to Islam was motivated by his reading of the holy Quran and by the Islamic idea of monotheism, not by Umar Gautam.

A former Hindu, who now goes by the name Saleem, accepted Islam in 2013. Inspired by the practice of Jummah namaz (congregational Friday prayers), Saleem, a street vendor in Punjab, decided it was time to follow the compass of his conscience and head towards the path of Islam. As a Hindu who was raised with an experiential understanding of the interaction between caste and class in the Hindu society, every time Saleem saw the upper, the middle and lower economic classes stand together in prayer, Islam made more sense to him.

After Saleem read the Kalimah Shahadah (First Kalimah of Islam) and became a Muslim at a mosque in Punjab, the constant urge to be officially recognised as a Muslim led him to search for someone who could guide him to undertake legal formalities for the process. In 2017, when Saleem reached Umar Gautam’s office, he was determined to make the transition. Gautam, however, did not just right away begin helping him. He asked Saleem about why he had made this choice. He persistently questioned Saleem whether or not he was aware of the gravity of the choice he was making.

Also read: When It Comes to Violation of Freedom of Religion, Can the State Be Held Monetarily Liable?

Only after Saleem was able to convince Gautam about his decision to convert from Hinduism to Islam, did he guide him about the process of making it official. It was Islamic congregational prayers that inspired Saleem to become a Muslim, not Umar Gautam, Saleem said.

Hailing from UP’s Kushinagar district, Anil Kumar, who is now Anas, accepted Islam in 2013. Since childhood, Anas couldn’t relate to idol worship. He said, “I was always stuck in this dilemma as to who the actual superpower was? Who created the universe? Who arranged the solar system and this order where everything revolves around the sun?” His questions, he said, led him to discover his truth, which he found in Islam. After two years of practising Islam, he felt the need to be addressed as a Muslim, he added. “I wore the skullcap, followed the Islamic way of dressing but wherever I went they would see my ID and say ‘you don’t look like you’re Anil’, and they were right, I was Anas now.” So, to exercise his constitutional right to religion, he set out to see Umar Gautam in 2015.

Upon meeting Gautam, Anas thought his paperwork would be completed quickly. Instead, Gautam asked him repeatedly whether he had actually read Islamic texts in an in-depth manner. Asking Anas to read more and educate himself more before converting to Islam officially, Gautam offered him Islamic books. “For Umar sahab, Islam is a big commitment, he can never force someone,” he said.

Farhan, another former Hindu who converted to Islam, and sought help from Gautam, feels his arrest is a part of the larger anti-Muslim design of the current regime. He sought guidance from Gautam in 2015.

He said Gautam took Islam very seriously and would often ask people who met him for guidance to make informed and educated decisions about religion. Having accepted Islam himself, Gautam wanted people to understand Islam, its commitments and structure before they took the leap. For Farhan, the idea of rich moral conscience that Islamic texts held were enough for him to let go of his former religion. The commitment to morality and righteousness brought Farhan to Islam, not Umar Gautam.

While Articles 25-28 of the Constitution bestow upon every citizen the right to profess and propagate one’s religion, in Yogi’s Uttar Pradesh, this right serves a bare minimum purpose when Muslims wish to exercise the same.

On September 22, Maulana Kaleem Siddiqui, a prominent cleric from UP’s Muzaffarnagar, was arrested by the UP ATS for his alleged involvement in the “illegal conversion racket”. Booked under sections of UP Prohibition of Unlawful Conversion of Religion Act 2020 and sections of the Indian Penal Code for fraud (420), criminal conspiracy (120B) and promoting enmity between different groups on grounds of religion (153a and 153b), Siddiqui faces the same fate as Gautam.

Shadab, who accepted Islam in 2012, went to Siddiqui’s office in Delhi’s Batla House in 2013 to formalise his conversion.

Siddiqui asked a lot of questions to Shadab – from asking him his reason for converting to testing his knowledge of the holy Quran and other Islamic scriptures, to making sure Shadab wasn’t converting out of love for a Muslim girl, Siddiqui was determined to test Shadab’s sincerity towards Islam. “He very frankly told me that if I’m converting to Islam for a Muslim girl, he won’t help me as he felt such people don’t take religion seriously, but when I told him my reasons, he was convinced,” he said.

He further asked, “What does forceful conversion mean in the government’s dictionary? Does it not apply to Hindutva henchmen who threaten to kill Muslims if they don’t chant Hindu mantras?”