To Mock or Not to Mock Religions, That Is the Question

A little introspection in India would show that all those who are condemning Islam in terms of having some sort of fundamental defect in it are likely to behave very differently if Charlie Hebdo were to mock Hindu deities. 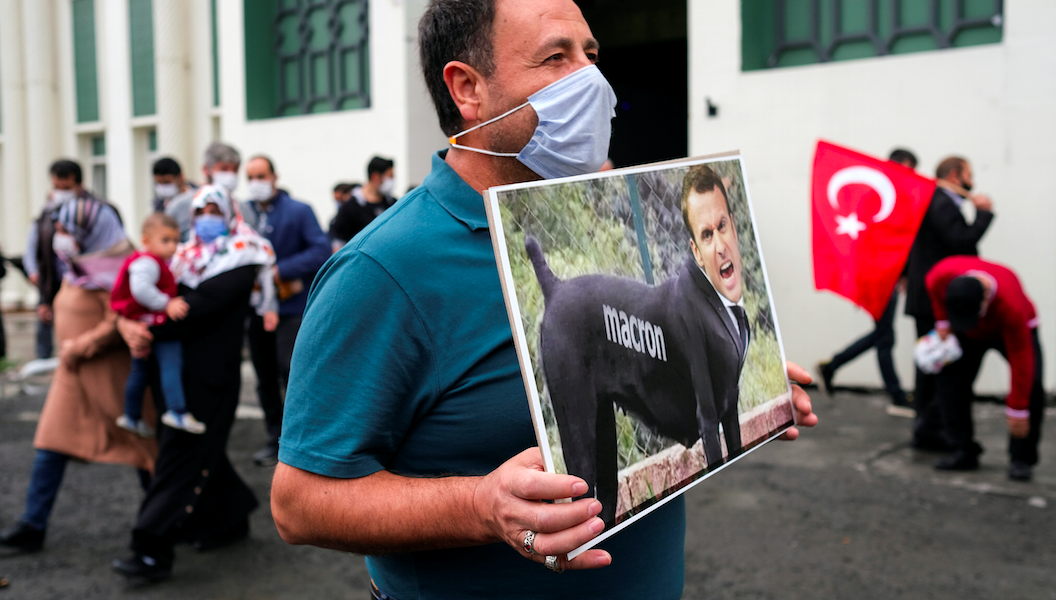 A man holds a placard during a protest against the publication of a cartoon of Prophet Mohammad in France and French President Emmanuel Macron's comments, in Istanbul, Turkey October 30, 2020. Photo: Reuters/Murad Sezer

Two recent murderous attacks in France including the attack at a church in Nice and the murder of a teacher in a north-west suburb of Paris, have deservedly been met with worldwide condemnation.

However, as expected, #NiceTerrorAttack and #FranceTerrorAttack are trending on Twitter and there has been a flurry of posts, memes and cartoons blaming and deriding Islam per se for this. These incidents have provided a fortuitous opportunity to the usual suspects in India to launch their tirade against Muslims and Islam with renewed vigour. I do not intend to write a thesis on any religion in this article, but it can be easily proved to all but the diehard bigoted that murder does not have sanction in any religion.

All murders are equally condemnable

A murder committed in the pursuit of sexual desire does not condemn sexual desire per se. As we know, had it not been for sexual desire, the human race would not have been able to propagate itself. A murder committed to acquire wealth does not denounce acquisition of wealth. Had people not been acquiring wealth, the human society could not have had the comfortable existence it has today. Nationalism may be a laudable thing, but murder committed in the name of nationalism is bad and could have disastrous consequences. The murder of Archduke Ferdinand by a Serbian nationalist was one of the precipitating factors for the devastating World War I.

Similarly, even if a person deludes himself into believing that he would earn religious merit by murdering people of other religions, that fact does not qualify his religion for summary denunciation. A crime of any description remains the criminals’ individual responsibility. Even if a crime is committed in the name of religion by a group large enough to be called an army or a nation, it cannot implicate the religion.

Therefore, from the crimes committed by individuals, there is no reason to claim that Islam has some ‘fundamental defect’ in it and blame Islam. Nobody has the authority to be the sole representative of a religion.

Strictly speaking, therefore, it was impolitic on the part of the French President Macron to speak of Islam being a religion, which is experiencing a crisis today, all over the world, citing tensions between fundamentalism, proper religious projects and politicians. As Macron had begun his speech by reasserting that the French principle of secularity guaranteed the freedom to worship, rejecting the ‘trap’ laid by extremists, which would seek to ‘stigmatise all Muslims’, it was clear that he did not mean to denounce Islam per se.

However, he overlooked the fact that common Muslim believers, politicians, Muslim religious organisations and Muslim extremists are all separate entities, which are not dependent upon each other, and their common factor, that is, Islam, could not be held responsible for their independent actions.

Moreover, since there are schisms and divisions in almost all religions, the fallacy inherent in his argument can be easily discerned. By an extension of his argument, all religions could be said to be experiencing a crisis. We cannot possibly think of religions, which are perfectly homogeneous with every single adherent following exactly the same line.

There is no such universally recognised body of Islam, which has the authority to approve or disapprove of something related to religion and order actions accordingly. Pakistan has criticised French President Emmanuel Macron for ‘encouraging Islamophobia’. Besides condemning Charlie Hebdo, a French weekly magazine, the Turkish President Erdogan said that Macron needed ‘mental checks’ over his attitude towards Islam.

They are entitled to their criticism, but only in their respective capacities as representatives of their respective nations as political entities. They cannot subsume the authority of being universally accepted champions of Islam and thus speak for Islam per se.  Former Malaysian Prime Minister Mahathir Mohammed had no authority to speak for all the Muslims of the word when, in his 12th tweet out of the series of 13 tweets, he threatened, “Muslims have a right to be angry and to kill millions of French people for the massacres of the past.”

He could speak only for himself, not for the 1.8 billion Muslims of the world.

One can mock anything, but cannot prevent others from reacting

The criminals in these and similar incidents, at their personal level, might have felt aggrieved at what they perceived as insult to their religion.

This brings us to the central ethical and legal theme of this article. If someone has a right to mock or abuse others in the name of freedom of expression – be it regarding their religion, culture, colour of skin, appearance, intellect, bodies, dress, mothers, fathers, sisters, whatever – others have a right to feel offended or provoked too. Now what they do in response is their problem. If it is a crime, they will be punished according to the laws of the land where the crime is committed.

Committing a crime is not their right, but to get angry or feel offended is indeed their right. In the name of freedom of expression, theoretically, one could ridicule anything under the sun. However, as long as the target of ridicule is prepared to face the legal consequences of his actions, he too has the freedom to do whatever he wants. 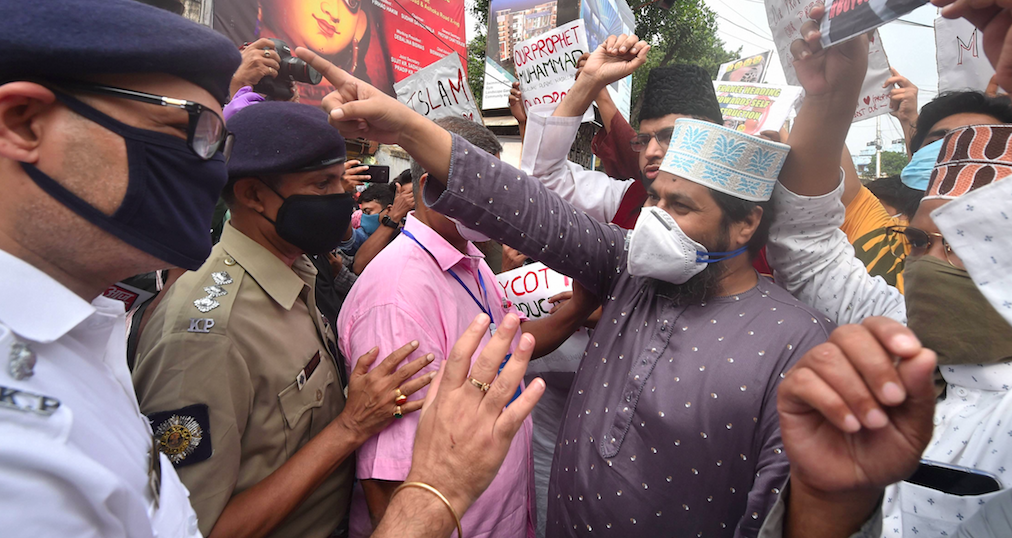 Police speak to Muslims protesting against Macron’s words at the French Consulate at Kolkata. Photo: PTI

In India, Section 295A IPC pertains to ‘deliberate and malicious acts, intended to outrage religious feelings of any class by insulting its religion or religious beliefs’. Section 153A IPC deals with ‘promoting enmity between different groups on grounds of religion, race, place of birth, residence, language, etc., and doing acts prejudicial to maintenance of harmony’.

It necessarily follows that we admit that it is ‘natural’ for people to be hurt if their religion is mocked.

There is a fundamental conceptual flaw in such laws because, numerous judicial pronouncements notwithstanding, religious feelings or sentiments are not physical entities and hence there will be always be an element of subjectivity in considering them. All offences against the human body, for example, involve violating the bodily integrity or sovereignty of a person that is verifiable and measurable in terms of injuries caused, etc. However, there is no scientific concept of a corresponding mental integrity or sovereignty of a person.

Humans of various races and regions and have been mocking ‘others’ in their jokes or literature since ages. They have not led to murders. The reason is people tolerate something whereas they get outraged over some other things. This is purely subjective behaviour. It cannot be predicted that somebody would take offence over that thing only and not over this thing.

By the same argument, it cannot be legislated that people must not get their sentiments hurt or must not get provoked unless a certain boundary is breached. What that boundary ought to be, will always be disputable. Scientifically speaking, such a boundary cannot be defined without invoking the hypothetical concept of a ‘reasonable man’ because the effect of words, pictures or any other form of communication is different on different people. Unfortunately, being an ‘unreasonable man’ is not an offence. He could be punished for his acts, but not for being unreasonable.

That raises the question, how can humans live together then?

My contention is that understanding, tolerance and respect for others must be mutually evolved. Until such time that humans evolve this understanding, such crimes will continue to take place.

Some people argued that Charlie Hebdo has had mocked Christianity too and that the Catholic organisations had responded by suing them some 13 times, but not by murders. Well, it was very kind of them but we cannot expect everyone to behave that way. Not everybody is given to rushing to courts. We may punish people for committing crimes, even shoot them as they did in France; however, we cannot prevent them from getting provoked.

A little introspection would show that all those who are condemning Islam in terms of having some sort of fundamental defect in it because some Muslims committed a crime in the name of religion, are likely to behave very differently if Charlie Hebdo were to mock Hindu deities or Hindu religious symbols. There would be a call to boycott French goods and there could be demonstrations outside Alliance Françoise. Hotels and restaurants serving French fries might incur their wrath and some zealous people could demand to return the Rafales also.

We may recall how Hindus had reacted on such matters in the past, whether they involved some allegedly obscene paintings of M.F. Hussain or some advertisement by the hair stylist Jawed Habib stating ‘gods too visit JH Salon’, or designer shoes carrying pictures of deities, etc.

Indians must see to it that first, their laws like Sections 295A and 153A IPC admitting the fact that religious feelings could be hurt are scrapped. As long as we keep them, some crazy people will always find an excuse in them to feel outraged and commit offences. By scrapping them, we will at least be able to take the ‘religious sting’ out of the offences.