The Tazia Makers of Lucknow

Lucknow’s Kazmain block is abuzz with excitement and peppered with colourful tazias in the run-up to Muharram. 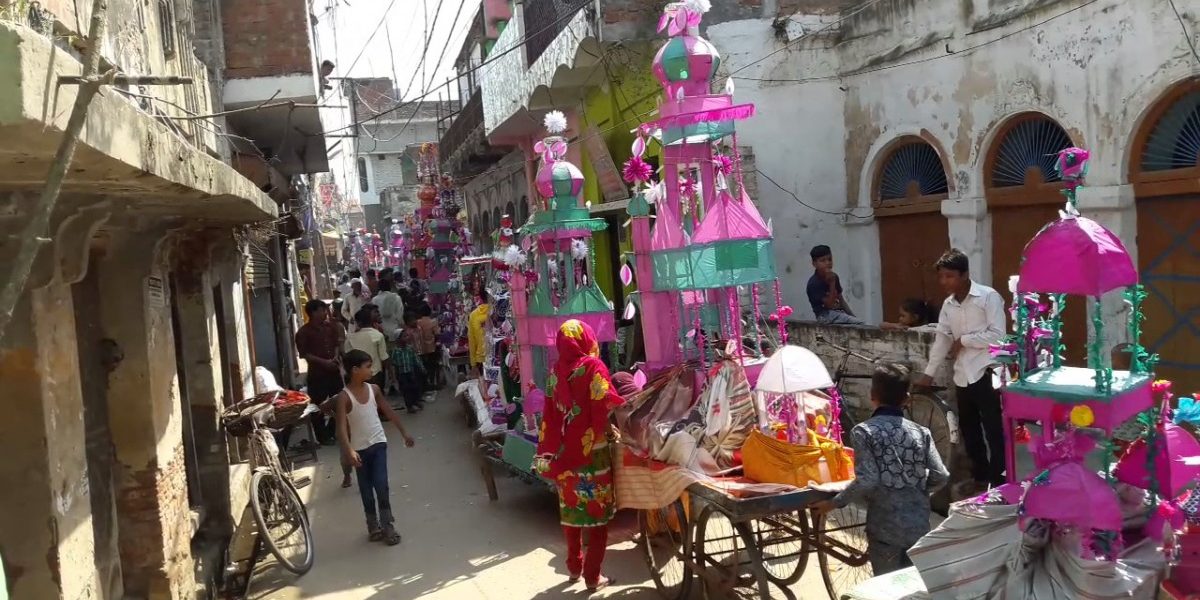 Unlike popular perception, Muharram does not refer to one particular day. On the contrary, it is the first month of the Islamic lunar calendar, one among the four months considered sacred in Islam. Beyond this, it means starkly different things to Shia and Sunni Muslims. The Sunnis celebrate the tenth day of Muharram – called Ashura – as a sign of Moses’s victory over the tyrannical Egyptian pharaohs when God graciously parted the Red Sea and the Jews were saved from persecution.

Ashura is the day when Moses is believed to have observed a fast as a sign of gratitude to God for helping him liberate the Jews. Prophet Muhammad and Moses had this in common – the goal of liberating their people, which is why this story moved Prophet Mohammad so deeply that he commanded his followers to observe a fast on this day as well.

In contrast, Muharram sets into motion a period of mourning for the Shias. The tenth day – also called Ashura – is believed to be the day the Prophet’s grandson, Hussain, was killed in the Battle of Karbala in 61 Hijri (AD 680). Hussain’s forces had clashed with those of the ruler of Umayyad, Yazid Ibn Muawiyah, as a result of a power struggle to lead and control the Caliphate. Sadly, Yazid’s forces triumphed and Hussain died a martyr on the battlefield along with his family and followers.

This is where Lucknow’s famous tazias come in. These are miniature mausoleums generally made of bamboo and colourful paper and are modelled on the mausoleums in Karbala. These are used in rituals and processions on the tenth day of Muharram, mainly in the South Asian and Caribbean regions. Interestingly, the term tazia means something else altogether in and around Iran. In Persian culture, tazia refers to passion plays inspired by the historic events of the Battle of Karbala, in which the heroic death of Hussain and his followers is enacted, thus symbolising valour and an indomitable spirit of resistance.

And the makers of these elaborate and intricately-detailed tazias, the tazia makers, residents of Kazmain block of Lucknow, are experts in the art of tazia making, what with most of the men and women earning their livelihood from it. Since tazias from here are sent to faraway cities across the country, as well as to the 300-400 villages nearby, the work usually starts six months prior to Muharram. This year, the month of Muharram commenced on September 12, and the ritualistic parade is scheduled for September 21. 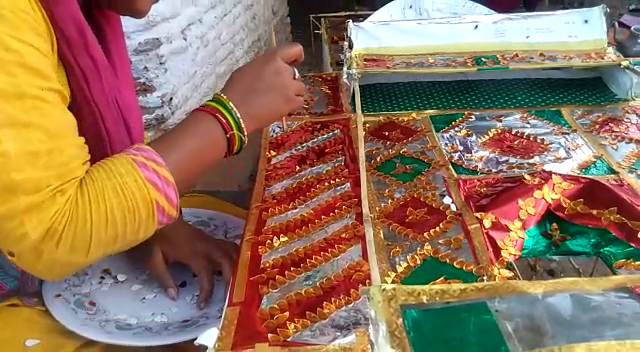 Sultana says she has been making tazias for as long as she can remember. “We picked up the art looking at our parents and grandparents who, too, did this for a living. As little kids, we would carefully observe their every move – we were so fascinated by the colours and the designs. And before we knew it, we had learnt it too.” But now she only does the paper cutting bit, for it is not possible for one person to perform all the steps involved in the process, she patiently informs us.

Babloo Abbas fills us in with the logistics of it all. “Five tazias can be made from about three bamboo sticks. If you procure the bamboo early on, say one or two months in advance, they turn out to be much cheaper – about 120 rupees per piece. But the closer it gets to Muharram, the more expensive they get, with prices going up to 140 rupees per stick.”

Bibi’s and Ali’s families, too, have been doing this for generations, and it was but natural for them to become tazia makers as well. Ali practically considers it his duty to make tazias. “Even though we don’t have a formal system for ordering and supplying, it is axiomatic for us to make tazias around this time every year. It would be practically wrong of us not to. We will make them till the end of our days.”