Sabarimala, in the Fading Light of Constitutional Values

The word 'hüzün', popularised by Turkish author Orhan Pamuk, holds the essence of one's resigned sadness over the SC's latest judgment on the review petitions allowing women into the Kerala temple. 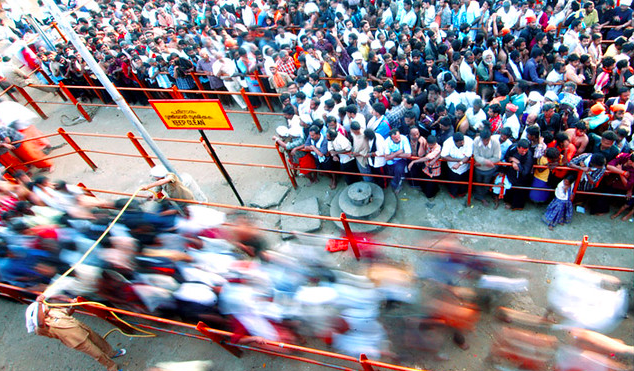 I read the Supreme Court’s majority judgment on the review petitions against the entry of women of menstruating ages to the temple of Sabarimala in a mood of intense melancholy that can only be described adequately using the word hüzün, which Orhan Pamuk dwells upon in his memoir, Istanbul: Memories and the City.

My hüzün, however, is for the fading light of the values of the Indian constitution: a resigned sadness about the withering light that does not nevertheless let it slip into the total oblivion of forgetfulness. The Babri Masjid judgment, and now, today’s majority pronouncement on the Sabarimala issue, only deepens the mood – both the melancholy as well as the determination to cling on to the memory of the waning light.

The judgment does not revoke the entry that it granted women of menstruating ages to the temple; it refers it to a bigger bench. This has appeased the highly conservative elements in the Hindutva fold, going by the reactions of the Brahmin-Sudra combine that monopolises the temple now, and the soft-Hindutva political elements that cushion them here.

These were often groups intent on employing any sort of, and any extent of, violence to perpetuate the exclusion of women there.

That the opening up of the temple has not been struck down is no consolation to me at all. This is because the psychological price we have paid as a society for it has been really too much.

Around this time last year, we witnessed the worst in all groups that vie for power here. We saw the most egregious gender conservatism surface in the sudra and Hindutva-ised avarna folds of the Malayali hindus and even among many foot-soldiers of the Left parties.

BJP workers pelt stones in Palakkad while protesting the entry of women into Sabarimala. Photo: PTI

We saw empowered, highly educated women insisting that even an 11-year-old who had attained puberty might disturb Ayyappa’s spiritual focus; we heard a female cardiologist based in New York peddle theories of ‘divine energies’ in temples that may unsettle women’s reproductive systems – and saw her get away with it (as far as I know, she has not lost her licence to practice modern medicine).

During that nightmarish time, women who openly expressed their wish to visit the temple were hunted down, pursued, harassed, harmed, arrested, and subject to the worst trolling. We saw elements on the ‘progressive’ left joining discourse with the right-wing to blame these women; we saw that the leaders of the left lacked imagination, shrewdness, and moral integrity.

Personally, for me, the most painful part was the way in which progressive ideals – telescoped into the word ‘renaissance’ – were watered down ruthlessly and cynically as a defensive counter-strategy by the left leadership, which ultimately eroded seriously the gains that women had made in terms of a public voice of their own.

At the end of it all, leftist women were turned by their men into passive bricks in a ‘wall’ that these men organised supposedly against fascism. We have still not recovered from this loss of voice.

Was such a price worth paying for a demand that no social group on the left of the political spectrum in Kerala, leave alone the advocates of gender equality, had endorsed widely, and even less, raised?

Now the Supreme Court’s indecision throws us into the prospect of yet another agonising period. But taking into consideration all that has transpired over the past one year – the incontrovertible truth that majoritarian hubris has taken over most public discourse and institutions – the fall from high-falutin rhetoric about breaking down untouchability in last year’s judgment, to the meek, almost scared, observation about “the power of the court to determine if the constitutional court can interfere in such integral parts of the religion,” is the least-surprising part.

This statement, for example, is not at all clear: what does it imply? That the exclusion of women of menstruating ages on sexualised, insulting grounds is integral to religion?

What does it refer to – the actual exclusionary practice, or the grounds advanced in its justifications, which vary?

Kanakadurga (left) and Bindu were the first women to enter Sabarimala after the Supreme Court’s verdict. Photo: Reuters

The claim that the resolution of what was a very specific question about a specific practice in a specific place involves consideration of ostensibly similar practices in Islam, Zoroastrianism and so on is a version of the tu quoque fallacy, more precisely, whataboutery.

When I ask you about Sabarimala, you point to Islam etc., deflecting the whole debate.

This is not just a matter of poor argumentation; it is rather, the unnecessary timidity which leads to convoluted constructions which strive to give the impression that the issue is being properly addressed while it is actually not.

But what is perhaps more worrying, beyond just bad argumentation, is that the proposal that all religions should be ridden of gender-based exclusions with a single stroke of a Supreme Court bench might indeed be an evil portent – of the Uniform Civil Code.

And even worse, assuming that the Supreme Court manages to embark on such a ‘clean-up’, and then what may be realistically expected under present circumstances? The majoritarian hubris that rides over the land rough-shod will punish women who take the Supreme Court seriously, flouting the law without major consequences; the male authority in the minority communities will be relentlessly disarmed and undermined not by minority women, but by the majoritarian state and its lynching-hungry ‘civil society’. Whatever fig-leaf of social peace left in this society will disappear. The strategy, then, seems to be this: silently collaborate with the Hindutva effort to reduce Muslims to second-class citizens, and soft-peddle issues that may stoke internal dissension, like women’s rights within the Hindu religion.

Not a word was uttered it seems about the horrendous violence openly advocated, and practiced, to a considerable extent, against the women who had taken the Supreme Court seriously last year, by these petitioners!

Instead they have provoked deep and fundamental ‘questions’ about the reach of the Court and the unshakeable nature of ‘integral parts of the religion.’

If the Babri Masjid judgment seemed to indirectly condone the destroyers of the Masjid, the ones who had broken the law, this one takes seriously precisely those who had heaped infamy on infamy on the judges who framed last year’s decision.

We are indeed slipping into darkness. I cling to my hüzün stubbornly. They may leave our eyes blind by killing the light, but hüzün is unaffected. It thrives on the dim but persistent light of memory.

J. Devika is a feminist historian from Kerala.