How a Third Dimension was Introduced to the Ayodhya Judgment

The case, which has so far been projected as a Hindu-Muslim dispute, has now harnessed the Sikh faith. 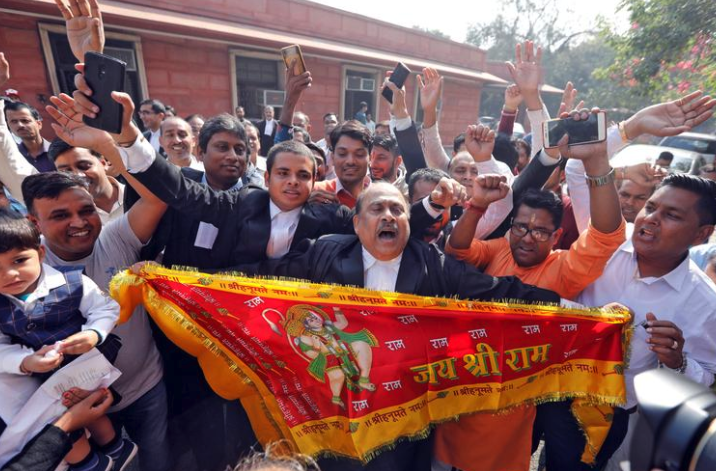 A lawyer reacts as he displays a religious flag during celebrations after Supreme Court's verdict on Ayodhya land dispute, outside the court in New Delhi on November 9, 2019. Photo: Reuters/Adnan Abidi

The Babri Masjid case is not just a title dispute. It’s a dispute between the idea of the nation-state and the idea of India that ordinary people carry in their hearts and minds.

On one hand you have the demand for a Hindu nation as envisaged by the RSS and its political wing, the BJP and and on the other the fluidity of the India that refuses to be boxed by narrow/conservative definition of religion, caste/jati, region or language, something that the preamble of the Constitution of India in some measure reflects with its emphasis on justice, liberty, equality and fraternity as foundational stones of democracy.

This is amply illustrated by the reaction of the Sikhs to the recent verdict of the Supreme Court on the Babri Masjid case. The case which has so far been projected as a Hindu-Muslim dispute has now acquired a third dimension.

The five-member bench Court in its wisdom sought consultation with a Sikh expert (Rajinder Singh) on the question of whether Guru Nanak Dev (1469–1539) the founder of the Sikh religion, visited Ayodhya as part of its perusal of travelogues before the construction of the mosque in 1528. Guru Nanak Dev is believed to have travelled to Ayodhya between 1510–11, which is before Babur’s invasion of the Indian subcontinent.

The judgment refers to the expert on pages 992–994, where it states that Rajinder Singh, was a witness for the Uttar Pradesh Sunni Central Board of Waqfs (defendant №2 in Suit № 4). On this page, Sikhism is described as a “cult” and Rajinder Singh as “a person having an interest in the study of religious, cultural and historical books of a Sikh cult”. In his deposition, Rajinder Singh states:

“Guru Nanak Devji, after getting the appearance of God on an auspicious day, Bhadrapad Poornima, 1507 CE prepared him for going on pilgrimage. Then he went to Ayodhya via Delhi, Haridwar, Sultanpur, etc. Almost 3-4 years have passed in this journey. Similarly, Guru Nanak Dev went on pilgrimage to see Shri Ram Janam Bhoomi Mandir in 1520–11 CE. It is mentioned here that invader Babur has not invaded India by that time.”

The judgment notes that along with this statement, Rajinder Singh annexed various “janam sakhis”. His deposition in this context is:

The Sikh community has reacted vociferously to this deposition and inference made by the five-member bench led by the Chief Justice of India, Ranjan Gogoi. Their essential objection is that Sikhism has been misrepresented and misunderstood.

But what exactly are “janam sakhis”?

The literal translation would be “life stories” or in other words, tazkiras or written hagiographies and malfusat (compilations of conversations of a saint) that became popular during the rise of the Sufi movement in North India in about 12–13th century. As its contemporaries, it was natural for Bhakti saints (Sants) to borrow this form of remembrance/ recording from the Sufis.

This accounts for records of Kabir Bani and Baba Farid Ganj-i-Shakkar’s philosophical discourses and many others (that have been reproduced in the Guru Granth Sahib, the holy book of the Sikhs).

As was the norm of the day, many of the saints, addressed their faithful in various literary forms. The most common of which were oral literary forms such as dohas (couplets), pads (short lyrics set to music/ raga) and sakhis (is a form of doha with roots in Sanskritic tradition of Aparbrhamsa).

The first compilation of Sant poetry which bears a definite date, according to historians, is the Adi Granth i.e., the holy book of the Sikhs, compiled by Guru Arjan in 1603–1604.

The Sants from this time are divided into two main groups. The northern group includes poets from the North-West region of Punjab, Rajasthan and the Gangetic valley, whose figurehead is Kabir and the southern group that includes Maharashtra, and whose figurehead is Namdev. The difference between the two groups is that the north group is defined by strong anti-Brahminical overtones, while the southern group was strongly wedded to the Vedantic tradition or the authority of the Vedas and the Vaishnava tradition.

The North group to which Guru Nanak Dev belonged, as his affinity for Kabir, demonstrates, makes fun of Vedic teaching, rituals, and knowledge. Kabir though Muslim, rejects the authority of the Quran. Guru Nanak Dev asserts that he’s neither Hindu nor Muslim. Here not only “sruti” and “smriti” of scriptures are disregarded but the authority of scriptures as such, which is viewed as the privilege of the Brahmins.

As the following Sakhi of Kabir demonstrates:

Guru Nanak Dev like Kabir rejected idol worship and the ritual barriers between castes based on the notion of pollution. He held pilgrimage to holy spots and holy baths as totally irrelevant to man seeking salvation. In fact, studies show, that Guru Nanak Dev’s position is in many places identical to that of Buddhists and Jains of old. The belief in nirguna — one formless whole — Ek Onkar re-asserts this position. How could such a man have gone for darshan or a pilgrimage, as suggested in the deposition?

The question that arises here then is what “janam sakhis” were presented before the Court? Going by the dates of the sakhis mentioned in the deposition it is clear that all the sakhis date from the 18th century and later when the Brahminical revivalism becomes evident. So, only a detailed study of these sakhis, on whether they represent the Vedantic scholarship or the nirgun view of the world held by Guru Nanak Dev as recorded by Guru Arjan can decide the matter.

Punjab, Rajasthan and the Gangetic valley are the repository of an alternate idea of India. And this idea of India cannot be overturned by a bench of judges. As a legal expert commented, “The law and state cannot and should not tell us what is essential or non-essential in a religion. The judiciary is not supposed to take over the role of the clergy.”

The article was originally published on Medium. You can read it here.