Mother Teresa: Up Close and Personal

How I went from childhood contempt for the Mother's controlling ways to an adult acceptance of the social importance of her work.

Note: This article was originally published on September 4, 2016 and is being republished on Mother Teresa’s birth anniversary.

Today, September 4, 2016, on the day Mother Teresa is canonised, it is sacrilege for me, a Kolkata Catholic, to voice dissent of any sort. My son asked, “Ma, how can they canonise her? Christopher Hitchens’s manic abuse is over the top, but surely his allegations have to be treated seriously.” I didn’t really have an answer to that one.

Growing up across the street from Mother House

I spent my childhood in a flat across the road from the Mother House, as it’s locally known. So I passed Mother Teresa almost everyday on the way to school and back. This was in the ’60s, before she became famous. We often saw her loading her vans with supplies for Kalighat, the home for the dying and destitute, or the orphanage a short walk away. On school holidays, many Catholic kids were sent by parents to volunteer at Shishu Bhavan. We fed the toddlers, held bottles for infants, or helped bathe them.

Some junior nuns visited our homes. It upset us enormously that they were not allowed a sip of cold Fanta on a sizzling summer’s day. Not a cup of tea nor a bite of a samosa without Mother’s permission. As a precocious 12-year-old, I hated this tyranny. The dictatorship of the Mother. In the early days, it disturbed us to see the young sisters walking barefoot, even in the summer, on burning hot Kolkata pavements. The tar was melting on our roads in April and May. “Surely that’s not necessary?” my mother asked a quiet little German nun, who, unused to the heat anyway, was also forced to suffer blisters on her feet as well. But, this was Mother’s decree and Mother’s word was law. No one dreamed of questioning her. “Theirs not to make reply, theirs not to reason why”, I muttered to myself. They had to learn to suffer like Christ apparently.

In those days, kids were taught to respect their elders and revere the religious. To be seen and not heard. We’d be roundly scolded if we dared voice any critique of an older person, let alone a nun. In my teens however, I met Marxist teachers who forced us to think critically and to express our opinions. Liberation theology followed. Much of this critical thinking focused on institutionalised religion – for me, Catholicism in particular, Marx’s opium of the masses. Some radical views shocked me. True, we met a few horrid nuns and priests, but we also knew many more good ones. Brilliant Jesuits inspired us and shaped our thinking. So by the time I reached university, I was in an iconoclastic mode. I shunned the hypocrisy of many ‘pillars’ of the church. ‘Imagine no religion’, sounded like a solution. We’d been through Hindu-Muslim riots that seemed to reinforce everything that was wrong with religion.

Mother Teresa soon became one of those pillars. She definitely helped the poor. But her sisters, most from very poor backgrounds, were allowed to write home only once or twice a year. Their personal letters were scrutinised, sometimes by the Mother herself, or by superiors. Such a control freak, I protested. 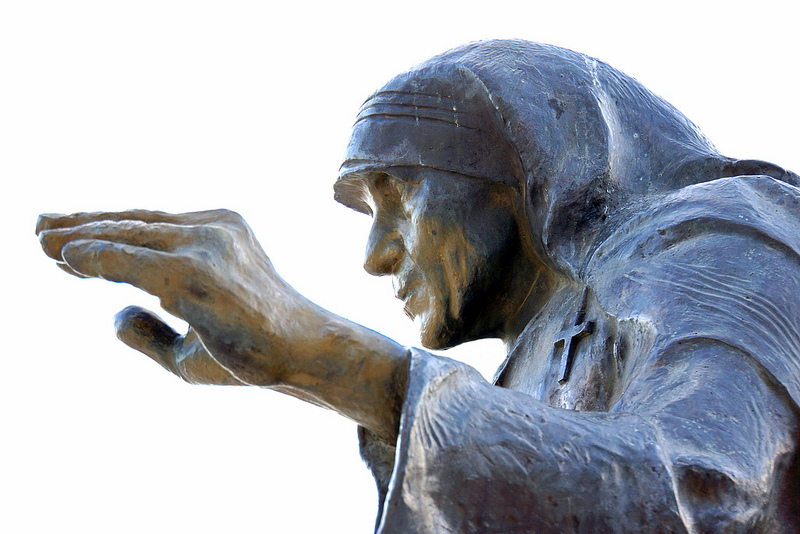 A statue of Mother Teresa, who founded Missionaries of Charity

My dislike of the venerable Mother crystallised in the ’70s. Our popular ‘Divinity’ professor, a young Australian nun, announced her intention of leaving Loreto College, my alma mater and Mother Teresa’s original teaching order, to join the Missionaries of Charity. Appalled, I argued, “Are you crazy? You are young, intelligent with such an impact on your students. How can you possibly join Mother Teresa? She forces her nuns to stop thinking. You’d have to put your brains on hold, swear blind obedience. You’d mortgage your intelligence, your intellect? For what? To mop floors? Anyone can do that. Why should you?’

“I’m not giving up my freedom,” my sister-teacher replied, gently. “I’m choosing to obey, to abandon pride and ego for humility. It’s what I want to do with my life.” And she walked into what we thought of as a prison and stayed there till the end of her days.

There were other minor irritants to reinforce my repugnance of the cult. Small things, no doubt. My aunt volunteered with the sisters. She brought home charts and files that dealt with the fairly outmoded family planning ideas touted by Mother Teresa. We discovered they were fudging figures to show better results. We were more amused than annoyed.

Then came Malcolm Muggeridge. Fame. Followed by Christopher Hitchens’s Hell’s Angel and Aroup Chatterjee’s The Final Verdict, a scathing indictment of Mother Teresa. All these people, both acolytes and critics, were over the top. Muggeridge canonised Mother Teresa decades before the Pope, while Hitchens descends to unacceptably appalling, often undeserved levels of abuse. Every critic decries the lack of basic medical hygiene – reuse of hypodermic needles, insufficient pain relief and medieval facilities at the care homes.

Yet, I have watched a brilliant government doctor in rural Tamil Nadu reuse syringes dunked in boiling water. I was shocked and said so, but as he angrily pointed out, “there are hundreds of patients, inadequate staff and hardly any equipment. Would you prefer me to sterilise properly or treat patients who have no where else to go?” Before HIV-Aids became widespread, notions of sterilising were very different. I mention this to place things in a historical and local context.

Like Hitchens, I was outraged by Teresa’s comment when she said, “There’s something beautiful in seeing the poor accept their lot.” Spiritualising and trivialising poverty is puerile, hateful. But Mother Teresa could. And she did. And the world, including Marxist Bengal, who should have known better, applauded her and lapped it up.

Critics went incandescent at Teresa’s words to a dying man, “You are suffering, that means Jesus is kissing you!” The pain-wracked patient screamed, “Then tell your Jesus to stop kissing me.” As a Catholic in India, such Teresa-isms had me squirming with embarrassment. Ashamed to face non-Christian friends.

At 19, full of the arrogance of youth and with self-righteous indignation, I asked, ‘How can she take money from the world’s most obnoxious dictators, in the name of the poor? Why is she silent about unjust wars and oppression?

Twenty-five years ago, we visited her Kolkata chapel. My mother asked the by-now iconic Teresa to bless her grandchildren. My children. She obliged. My mother gestured to me, “My daughters used to volunteer at Shishu Bhavan when they were young.” “Oh,” responded the saint, with her trademark hauteur. ‘When you were a child. But now? You do nothing useful for the poor now, I suppose?’ Stung by her arrogance, her rudeness to my unassuming, inoffensive mother, I felt the old anger rising. I stayed silent, biting back a rude retort. “Who needs her blessings. Why did you bother asking her?” I admonished my mother. “She’s even more insufferable now than she used to be.” The incident reinforced the old dislike.

An unexpected encounter, after Mother Teresa’s death, forced a turning point for me.

Over ten years ago, not far from the Mother House and our Kolkata home, I passed a man, lying filthy and semi-conscious, on the pavement. ‘A drunk’, I thought and moved on. Something made me stop and retrace my steps. Is he drunk or dead, I wondered, feeling stupidly inadequate.

In the distance, I spotted two nuns clad in the distinctive blue and white saris. I ran towards them, “Can you come, there’s a man lying on the roadside. I’m not sure if he’s drunk or dead.” They came immediately. One fetched an ambulance. The other took over the patient. He was dying, not drunk.

And, contrary to Aroup Chatterjee, unfortunately, tragically, Kolkata still has people dying on its pavements, abandoned.

That single incident forced me to change my hitherto holier-than-thou criticisms of Mother Teresa’s work. I’d been taught to despise charity work. In my development gospel, one had to work for change, for human rights, for social justice. But, I realised, I cannot in good conscience, criticise a woman who picked people off filthy pavements to allow them to die in dignity. To my knowledge, there’s still no one else doing that job.

Driving home late one night, in rural Tamil Nadu, my husband and I saw a gang of auto-rickshaw drivers obviously molesting a woman. We jumped out of the jeep. My husband’s loud angry voice scared them off. They fled. The woman lay on the road, half naked and dazed. She was clearly mentally ill, we couldn’t get any response from her. We didn’t know what to do. The local all-male police station often housed drunken cops at night. Definitely not the solution. Take her home? And then what? And then I thought of Mother Auxilia, a tough charismatic nun in our town. Can we phone her? Midnight is not the best time to call a convent! But we did. She immediately replied. “Bring her over.” No red tape, no fuss. The woman was sheltered, cared for and looked after.

I am not particularly enamoured with sainthood. Or with Mother Teresa personally. But seeing her and people like her, through the eyes of the man on the Kolkata street or the vulnerable woman we rescued, made me pause. What would happen to these people if it weren’t for the Teresas and Auxilias of this world reaching out to them in ways I certainly couldn’t. Surely to them Mother Teresa must be a saint? Her legendary Kalighat home for the dying was Kolkata’s first hospice.
No frills, no doubt. Terribly bare and frugal, scandalous even, to western eyes.

I would hope by now, the sisters can use their billions for better facilities. Volunteer doctors and nurses would flock to them were a call sent out. As for me, I’ve learnt with age, I could never replicate the work done by the nuns. Cleaning sores and faeces. Dealing with leprosy patients. To criticise her failings would make me as arrogant as she undoubtedly was.

So instead, I salute the sisters who give desperate, dying people a clean place to die in. As for sainthood, I’m not qualified to comment or judge.