The Freshness of Gandhi's Religiosity in the Age of Celebrity Gurus

While Gandhi sought to radicalise the religious domain by transforming it into a practice of liberating mass movement, in these media-induced gurus we see the 'packaging of spirituality' for the affluent and the powerful.

A statue of Gandhi. Photo: Pixabay

To see the universal and all-pervading spirit of truth face to face, one must be able to love the meanest of creation as oneself. And a man who aspires after that cannot afford to keep out of any field of life. That is why, my devotion to truth has drawn me into the field of politics; and I can say without the slightest hesitation, and yet in all humility, that those who say that religion has nothing to do with politics do not know what religion means.

Even though I am not free from the discourse of modernity – its celebration of ‘scientific reasoning’, its gospel of ‘progress’ and its ‘secular’ scepticism towards religion in the public space, I am not indifferent to what Max Weber would have regarded as the quality of a ‘religiously musical’ person – a quest for the ultimate ‘meaning’ of existence. No wonder, even though I am not a ritualistic person with blind adherence to some organised religion, the inner journey of the likes of Buddha and Kabir, and Mira and Rumi fascinates me. Their religiosity/spirituality, I tend to feel, inspires us to see beyond the boundaries of ‘ego’, experience the unity of the self and the cosmos, and feel the enchanting power of love. Likewise, scientific reasoning alone, I feel, cannot create an environment conducive to the ethics of love, care and empathy. Instead, science without spiritual wonder often degenerates into some sort of ‘instrumental rationality’ with its inherent violence.

In fact, our religiosity can throw light on the dynamics of the phenomenal world – not to fragment and divide it into conflicting sects, but to make it more meaningful, ethical and egalitarian, despite the recurrence of death and inexplicable pain and suffering. It is in this sense that I see immense possibilities in the kind of religiosity that creates a rhythmic bridge between the self and the world, the secular and the spiritual, the political and the ethical.

Possibly, Mohandas Karamchand Gandhi realised it profoundly. Religiosity, far from taking him away from the everydayness of the political realm, made him deeply involved with it with new questions and new sensibilities. Gandhi’s life-long quest for ‘truth’ with engaged religiosity as well as political activism, I believe, is refreshingly different from what we are witnessing in our times – the arrival of ‘branded’ celebrity gurus and babas guided by the new management discourse of ‘art of living’ or ‘inner engineering’, packaged by the media, and pampered by a consumptionist class striving for instant Enlightenment.

As I contemplate on Gandhi, I find four essential characteristics of his religiosity. First, If religiosity implies a journey to the world inside, a reflection on the ‘Self’ (to use Upanishadic sage Yajnavalkya’s revelation, ‘Self’ is the ultimate light) and a process of inner cleansing and discipline, Gandhi demonstrated these qualities time and again. In fact, his self-reflexivity and the rigorous process of disciplining his body, diet and sexuality made him remarkably distinct from many other personalities of his time. For instance, even though Tagore and Gandhi trusted each other, there was a difference. While the aesthetics of the ‘poet’s religion’ with sublime prayers and artistic creations made him reasonably relaxed with diverse rasas of existence, there was an element of ‘puritanism’ (or harshness) in Gandhi’s ‘disciplined’ self.

Second, the ‘soul force’ – or the illuminating light of the ‘Self’ – Gandhi sought to sharpen was not merely for his own moksha or emancipation. As a matter of fact, his inner journey was closely linked to his journey to the outer world. To use a metaphorical symbol, Noakhali in 1946 became Gandhi’s most remarkably meaningful pilgrimage: a site that united the inner and the outer. No wonder, the domain of the political became the major site for his sadhana. And the power of ‘soul force’ – or the courage to remain calm, non-violent and energetic even at the time of worst form of politico-cultural turmoil, as Gandhi realised, ought to be channelised for evolving a new language of resistance against all that is unjust, and creating an alternative politics. 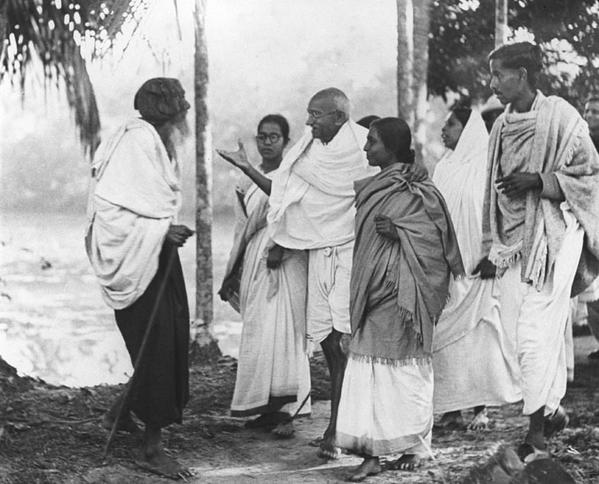 This, I believe, enabled him to break the wall between the ‘sacred’ and the ‘profane’; instead, the murkiest profane domain of political activism, Gandhi thought, ought to be spiritualised. In this regard, it is possible to see some similarity with Vivekananda as the monk too sought to rescue the Vedantic philosophy from the ‘caves and forests’ and apply it for eradicating people’s suffering.

Third, there was remarkable openness in Gandhi’s religiosity. Yes, he called himself a ‘sanatani Hindu’; and even his vocabulary (say, the concept of Ram Rajya), one may say, was derived from Hindu symbols. Yet, the fact is that his conscience became more important than the scriptures; and the spirit of dialogue enabled him to converse with all major religions. A striking illustration is a creative merger of the spirit of love and solidarity with the poor (Sermon on the Mount), the practice of anashakti yoga (Bhagavadgita) and the abundance of devotion (Vaishnavite tradition). No wonder, in the Kurukshetra of colonialism Gandhi sought to replace the ‘brute force’ of colonial modernity with the ‘soul force’ of swaraj.

And fourth, unlike many ‘enlightened’ sages, Gandhi was never shy of articulating his human vulnerability, his failures and blunders, and his temptations and deviations. His repeated failures in his experiment with brahmacharya, his stubborn and angry moments with Kasturba, his conflict-ridden relationship with his eldest son, or even violence in his non-violence – his life, through his own confessions, became a public document. In other words, he didn’t entertain any illusion of arriving at a stage that Buddha or Nachiketa would have regarded as ‘freedom’.

Well, Gandhi too was being observed – and at times, with apprehension and anxiety. Even Jawaharlal Nehru – guided by his secular/scientific temper – used to feel somewhat uneasy with Gandhi’s religiosity and ‘metaphysical’ orientation to the world. And Dr B.R. Ambedkar continued to scrutinise him with unparalleled criticality; and Gandhi’s religiosity, he alleged, was just another variety of ‘Brahminical Hinduism’ incapable of eradicating the seeds of caste hierarchy from our consciousness. Let the debate continue.

However, the fact is that unlike Raman Maharshi or Sri Aurobindo who preferred to live in the realm of spiritual ecstasy, Gandhi chose to enter an exceedingly difficult domain: to be religious, yet to be politically active with the indigo farmers of Champaran; to be contemplative with intense moments of silence, yet to be passionately involved with the riot victims of Bihar and Kolkata; and to be a ‘Hindu’, yet to be the most leading proponent of cultural syncretism and a politico-psychic movement against untouchability and ‘purity-pollution’ dichotomy. And possibly this appeal of Gandhi, despite his many failures and contradictions, refuses to wither away.

Ranveer Singh: Do you dance?
Sadhguru: Of course, how can I not?

I know I am referring to Gandhi at a time when the ideology that motivated Nathuram Godse to engage in a demonic act has become the dominant discourse. It has its own practice of religion: the religion that stigmatises and brutalises the ‘other’, militarises consciousness and valorises hyper-masculine nationalism. Moreover, the conservatism centred on religion – the tyranny of the priestcraft, the burden of ritualism and all sorts of exclusionary practices – continues to prevail. And then, another disturbing trend – and I wish to emphasise on it – is the proliferating growth of ‘spiritual industry’ reproducing itself through television channels, retreats in lavish ashrams, and widely circulated discourses of ‘stress-free existence’ disseminated through the new channels of communication: an industry that sells diverse packages of redemption to the emergent class – urban, professional, English-speaking and fairly wealthy.

See the sociology of this class. The fetish of ‘efficiency’, the reckless speed of contemporary living, the intoxication with conspicuous consumption, the ‘performance anxiety’ in a hyper-competitive ethos of social-Darwinism, the growing denaturalisation of existence with the heavy armours of privilege and status, and a sense of void, despite the euphoria of ‘success’ – the class I am referring to is living this hollow existence with inner emptiness and a sense of ‘guilt’. But then, it is not possible for them to go deeper into the ‘structural’ reasons for this discontent; nor is it possible for them to renounce their privilege, and feel the ecstasy of living in a communion with all. It is not possible for them to do what Siddharth, as depicted by Hermann Hesse in his classic novel, did – approaching a river, and be receptive enough to hear its stories of flux and continuity, and silence and detachment. In fact, in the age of instantaneity, they are in a hurry; they are striving for a packaged solution or some sort of counselling – a ‘feel good’ moment. 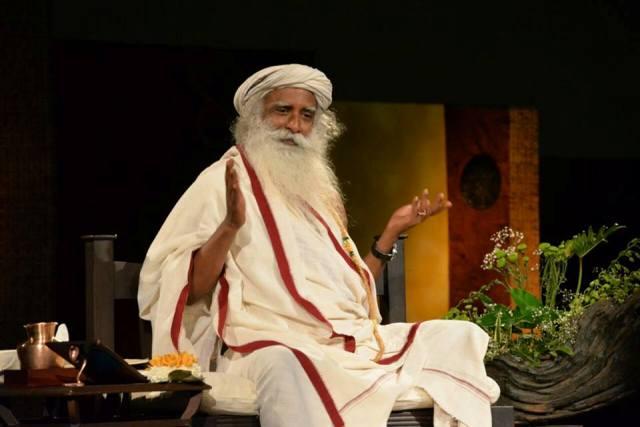 And many of these celebrity gurus fulfill this need. With some sort of counselling packaged by the discourse of ‘new-age religiosity,’ they emerge as ‘saviours’ and charmed this class – the alliance of film stars and cricketers, and corporate professionals and entrepreneurs. First, think of the symbolism that these gurus radiate. Unlike folk sadhus who look like fakirs, they speak fluent English with a distinctive accent; they quote Sanskrit shlokas with absolute comfort; they demonstrate their characteristic wit and humour; they are cosmopolitan because they want us to learn from, to quote Shri Shri Ravishankar, ‘British mannerism, American business and Indian spirituality’;  and they are techno-savvy and quite capable of charming a section of the youth through their ‘motorcycle ride’.

Second, they know their audience, and hence they would never advise them to do what the gurus of the poor and the lower middle class do – offer prasad to the local Hanuman temple every Tuesday, or take ‘holy’ bathe at Haridwar on a full moon night. Instead, they would advise breathing meditation, the power of concentration, a discourse on the Bhagavadgita in a five-star hotel, and the capacity to remain ‘peaceful’ and ‘undisturbed’ even if the world outside is in turmoil.

Also read: On Gandhi Jayanti, a Reminder That Gandhi Believed in the Spirited Women of India

I am not denying the therapeutic significance of this meditative self. However, as Gandhi demonstrated, this self has to engage with the external world, and resist its unevenness, violence and injustice. In other words, to be religious is to be a rebel, and resistance against the structural violence is, to refer to Gandhi once again, a mode of prayer that activates libertarian politics. And this is precisely what these state/corporate sponsored gurus with the awards like Padma Vibhushan (don’t forget that Gandhi didn’t get the Nobel Peace Prize, but Henry Kissinger got it) would never prescribe.

‘Debate, but don’t take sides’, Sadhguru’s ‘truthful’ advice to the youth, it appears, would make Karl Marx rethink his thesis: ‘Philosophers have interpreted the world in many ways. The point, however, is to change it’! No wonder, despite the much-advertised ‘philanthropic’ works by their mega foundations, or dazzling spectacles (quite often, ecologically destructive) for ‘world peace’, spirituality in this market-driven world transforms itself into a colourful package that Herbert Marcuse’s ‘one-dimensional man’ would consume as an ‘alternative’. Promote the system; yet retain your conscience! It is like reading a self-help book, and feeling positive in a world, that because of its very structure, breeds negativity.

Jesus was crucified. Gandhi was assassinated. Authoritarianism is here. Violence is all-pervading. So what? With absolute comfort, Sadhguru is responding to Karan Johar’s trivial, yet ‘pop’ questions in the ‘Rapid Fire Round’ amid the thunder of applause from an utterly non-reflexive crowd: well-fed, well-dressed, well-placed…