In an effort likely meant to isolate the nuns further, four of the five protesting nuns have been asked to return to the convents they were previously assigned to by the Missionaries of Jesus.

The protesting nuns in the Bishop Mulakkal case. Credit: PTI/File

New Delhi: For making their protest known against rape-accused Bishop Franco Mulakkal, head of the Jalandhar diocese of the Catholic Church, four nuns from Kuravilangad convent have been reportedly asked to leave immediately by Superior General Regina Kadamthottu.

According to an exclusive story by The News Minute, which gained access to the letters asking the nuns to leave the convent in Kerala’s Kottayam district, this is an effort to isolate and silence the nuns – the nuns have been asked to return to the convent they were previously assigned by the Missionaries of Jesus.

Also read: ‘Bishop Franco Mulakkal Is a Symptom of the Decay of the Church’

But though it was five nuns who took part in the protest in September 2018 organised by the Save Our Sisters (SOS) Action Council, only four have been asked to pack up and leave – Sister Alphy Pallasseril, Sister Anupama Kelamangalathuveliyil, Sister Josephine Villoonnickal, and Sister Ancitta Urumbil. The fifth participant, Sister Nina Rose, has not been directed to vacate.

“You have chosen in your individual capacity to support and pursue the legal battle seeking justice. The MJ Congregation and its members do not intend to make any sort of intervention or interference into the due process of law and justice and you will be free to carry on the judicial pursuit,” the letter accessed by The News Minute reads.

In her complaint to the Kottayam Police in June, a 43-year-old nun, also a mother superior, had alleged that Bishop Mulakkal raped her at a guest house in Kuravilangad in May 2014 and later sexually exploited her on several occasions. The nun said she had to approach the police as church authorities did not act on her repeated complaints against the clergyman.

In September, in fact, the Missionaries of Jesus congregation had alleged that the victim, who had accused the Mulakkal of raping her, five nuns and four others, plotted against the Bishop to frame him in the Kerala rape case. The congregation had also earlier alleged that the Kerala nun had “questionable relations with a local taxi driver” and “a physical relationship with a relative’s husband”.

Victim along with 5 other nuns&4 others conspired against Jalandhar Bishop.Victim’s friend was handling visitors’ register, they must have tampered with it.Victim took control of CCTV from Mother Superior:Missionaries of Jesus Inquiry Commission’s findings on Kerala nun rape case

Later, the senior Catholic priest was interrogated by the Kerala Special Investigation Team (SIT). In a strongly-worded letter, the nun had urged the Vatican to intervene in the matter and to remove Mulakkal as the head of Jalandhar diocese. Following this, the Bishop had been temporarily relieved of his pastoral reponsibilities. Soon after, the bishop was arrested by the Kerala police after intense interrogation and taken to a guest house at Kuravilangadu by police for reconstruction of the crime scene. 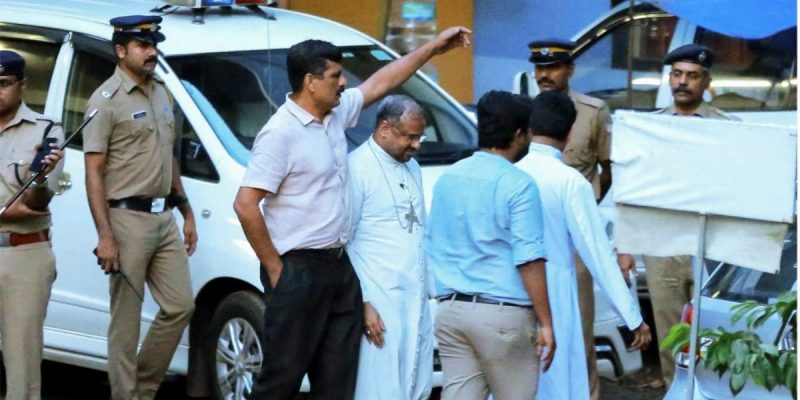 Mulakkal, was granted bail on October 15, 2018. Upon his release, he described his time inside prison as a “21-day retreat” where he got time for “meditation and personal reflection”.

When he returned to Jalandhar on October 18, he was given a ‘grand’ welcome by the Diocese of Jalandhar, including the nuns.

Punjab: Bishop Franco Mulakkal who was released from Kerala’s Kottayam jail yesterday after being granted unconditional bail by Kerala High Court, was welcomed in Jalandhar today. He is accused of raping a nun from Kerala. pic.twitter.com/k4H7J0FRMG

After the death of one of the key witnesses in the case, Father Kuriakose Kattuthara in Punjab’s Jalandhar in September, security was stepped up for the victim. His brother, Jose Kattuthara, has alleged that Father Kattuthara had been killed for giving a statement against Bishop Franco Mulakkal.

Before his death, in an interview to Mathrubhumi, the Father had said he was constantly threatened by church officials for his support of the nun who has accused the bishop of rape.

In November, the Missionaries of Jesus Congregation asked the Kerala police to shift the nun and five witnesses to a government-run home as the convent did not have financial resources to ensure their protection.

“Accusations sans truth have been flying thick and fast in the public realm about the lack of concern the MJ Congregation was showing to the nuns who are standing for justice. Even as you and a few other MJ members continue to have no qualms in issuing malafied public statements and circulate baseless stories tarnishing the images of the MJ congregation and portraying the Mother General and other members as ‘enemies of those who are fighting for their justice’, I have been ensuring that the congregation continue supporting you all with food, accommodation and the cost of medical treatment as required,” the letter evicting the nuns reads.