Kashi Vishwanath Temple May Soon Have 'Dress Code' for Devotees

If the code comes into effect, devotees will need to be clad in kurta-dhoti and saree to touch the Shiva linga. 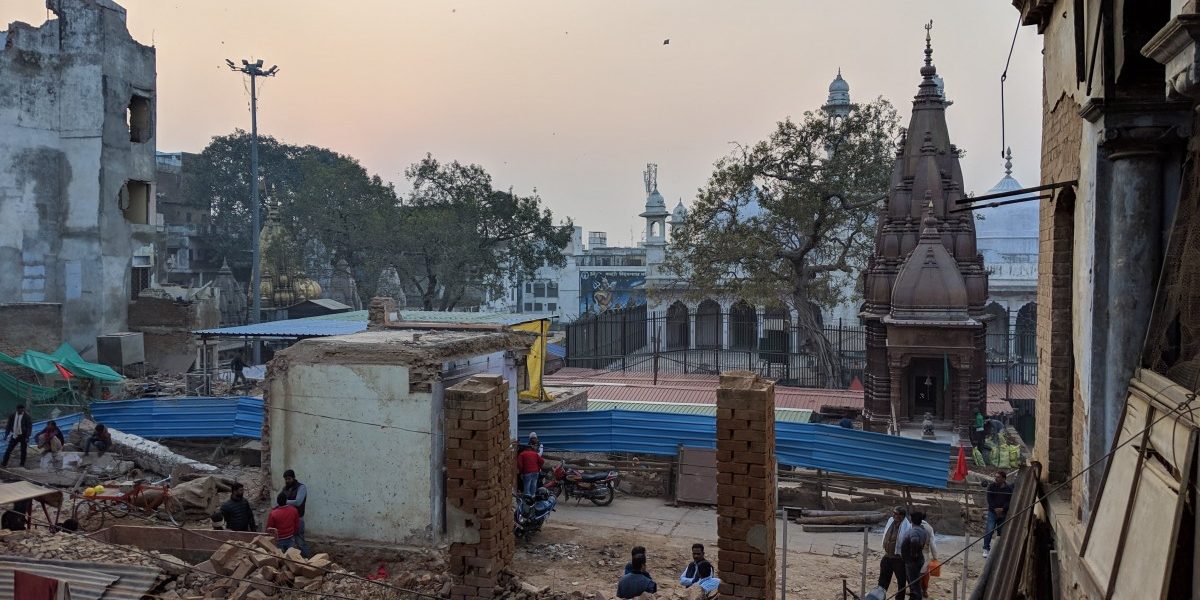 A view of the 'red zone' with Gyan Vapi mosque at the centre and Vishwanath temple on the right.

New Delhi: The Kashi Vishwanath Temple in Varanasi is planning to introduce a ‘dress code’ for devotees wishing to touch the Shiva linga inside the temple’s garbha griha (sanctum sanctorum), according to reports.

A Deccan Herald report said that the temple management is set to take a decision which will need devotees to be clad in kurta-dhoti or saree if they wished to touch the Shiva linga. Those who are not wearing the prescribed clothing items would only be allowed to see the longa from the outside.

The newspaper reported that the management was set to take this decision based on the advice of Hindu scholars. It added that UP’s minister for religious affairs Neelkanth Tiwari has approved the proposal, asking the management to implement it “at the earliest”.

A similar ‘dress code’ is already in place at other famous Shiva temples such as the Mahakal temple in Madhya Pradesh’s Ujjain. Kashi Vishwanath Temple is among the 12 ‘Jyotirlingas’ (Shiva Temples) in the country.

An official of the temple trust told news agency PTI that the suggestion to introduce a dress code was discussed at a meeting, but no formal proposal is under consideration.

Varanasi divisional commissioner Deepak Aggarwal said he had met minister Neelkanth Tiwari and members of the Kashi Vidvat Parishad, Vishal Singh of the Kashi Vishwanath Temple Trust on Sunday. The Parishad is a body of scholars that advises the administration on religious and other matters in the temple city.

“A suggestion to introduce the dress code of dhoti-kurta for males and sari for females for devotees who want to enter the sanctum sanctorum and touch the ‘Jyotirlinga’ was discussed at the meeting,” he said.

An oral suggestion was made by some members of the parishad that devotees wearing jeans, shirt, trousers and suits should only be allowed to offer prayers in the temple but not be permitted to touch the linga.

“There is no formal proposal under consideration and no decision has been taken on introducing a dress code,” he said.

According to Deccan Herald, a proposal to have a dress code for the priests was also discussed. ”It will enable the temple officials to recognise the priests during the months when the temple is visited by a large number of devotees,” said a temple official in Varanasi. The report added that it was unclear if the dress code would also apply to VIPs who visit the temple and perform ‘Rudrabhishek’, a special puja