Leena Manimekalai and Mahua Moitra must not be left to fight their battle against the obscene and violent Hindi-Hindutva cultural expansionism alone. This expansion speaks in the language of a violent version of vegetarian Vaishnavism. It draws its strength from the numbers that are found in states like Uttar Pradesh, Bihar, Rajasthan, Madhya Pradesh and others, which like to be identified as Hindi-speaking areas.

Before we proceed further, let us first understand the psychological make-up of the people of these Hindi-speaking areas, who merged their own, different linguistic identities with Hindi in the name of nationalism. The poet Yatri, who wrote in his first language Maithili and gained fame as Nagarjun in Hindi, observed nearly seven decades ago that Hindi was like an upstart, violently pushing out the old Maithili from all spaces. It happened everywhere – languages like Bhojpuri, Avadhi and Braj vacated their space for ‘Khadi Boli Hindi’.

Nagarjun complained that even when these languages, driven by nationalist impulses, made space for Hindi, the latter did not reciprocate the gesture. It demanded total submission. Apart from the fact that it was presented as a language that would bring material gains, it also colonised the spaces to dream, love and quarrel. The other languages were seen as limiting, narrow and also half-civilised – if not uncivilised. They were fit for emotions but not for thoughts. So prose had to grow in Khadi Boli Hindi. The political economy of Hindi and its proximity to power forced people of all languages to adopt it. 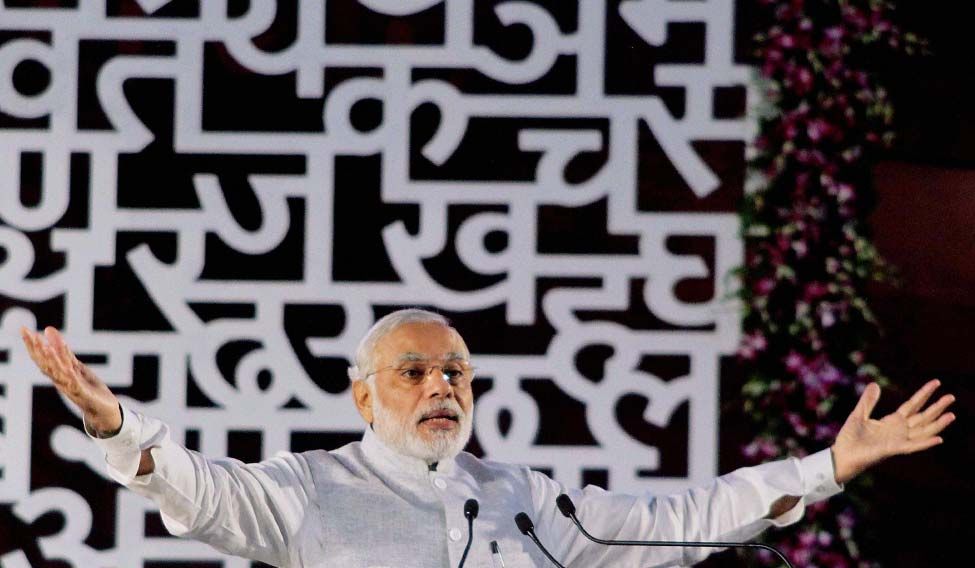 I am not discussing languages like Santhali, Mundari, Ho, Bhili or Gondi – languages of the Adivasis which were made invisible by the dominant Hindi. Perhaps, I will be accused of simplifying things but this simplification is necessary to fathom the damage that has been done to the imaginative and cognitive abilities of those who tried to shed their ‘narrow’ world and gain citizenship of this Hindi-dominated India.

There is also a separate conversation to be had about the violence that Urdu suffered at the hands of Hindi. But consider this: Hindi cinema was a misnomer, as it was essentially Urdu. We do not have a study that demonstrates the gradual withdrawal – or pushing out – of Urdu from cinema, which now has little space for anything except Hindi. The latter rode on the shoulders of Urdu and then kicked her out.

The push to write Hindi in the Devanagri script, originally used for Sanskrit, came bundled with an anti-Muslim bias. But standardised Hindi also impoverished those Hindus whose language of imagination was pushed to oblivion. So, they don’t remember the Shiva of Vidyapati or the Sita of Mithila folklore. Many used to tune into the Calcutta radio station on the day of Mahalaya, which announced the arrival of the Devi, and listened to the Chandi Path broadcast from there. But even this practice has become rare.

The ‘little traditions’ which were articulated only in these languages have now given way to the ‘grand tradition’ forged in Hindi – the preferred vehicle for the cultural politics of Hindutva which, riding on a Ram Rath in the 1980s, traversed the length and breadth of India. It left a trail of tears and blood, largely of Muslims but also crushed these little traditions. The homely gods and goddesses of different kinds of Hindus had to make way for the pantheon which was headed by Shri Ram.

This Hindi, after destroying the imaginative worlds of the Braj, Avadhi, Bhojpuri and Maithili people – now aims to conquer Bangla, Odiya, Assamese, Malayalam, Kannada and other languages.

In the last assembly and parliamentary elections of West Bengal, we were startled by the slogan, the aggression with which the BJP pushed its cries of  ‘Jai Shri Ram’ and Bajrangbali alarmed many Bengali Hindus. Then Mamata Banerjee invoked Durga, the deity of Bengal and vowed to fight the aggressive cultural politics of the BJP-RSS.

Now, Leena Manimekalai is facing an assault of cases for the playful and joyous poster of her documentary Kaali. Mahua Moitra, the Trinamool Congress (TMC) leader, said people have the right to imagine gods and goddesses as they choose. But the TMC decided to distance itself from her. This is a sad but understandable development. As Mamata Banerjee has started developing an all-India ambition, she believes that it can be achieved only by appeasing Hindi-Hindu sentiments. The first all-India party, the Congress, has once again demonstrated its pusillanimity before the aggressive majoritarian tendencies. It has proved that it is scared of Hindi majoritarianism, which seeks to colonise all “small” worlds and make them speak in the “official national cultural language”. One example of this is the attempt by the RSS-BJP network to replace the celebration of Onam, which marks the annual return of Mahabali in Kerala, with Vamana Jayanti. It has also tried to take Ram Navami celebrations to West Bengal, Karnataka, Kerala and other states. I was once in Kerala after Ram Navami and saw that the day was being celebrated. I asked someone if it was an old practice there and was told that it was a recent phenomenon. When members of the Bajrang Dal disrupted a play in Karnataka, they raised the slogan “Bharat Mata Ki Jai.” Another import from the Hindi land.

My father, who is nearly 90 now, was dismayed after hearing about the violent reaction to Manimekalai’s poster. He shared the bhajans of Bhakt Ram Prasad on his Bangla Facebook page. Here, Durga is mocked and ridiculed lovingly by her devotee. These bhajans used to be – and hopefully still are – very popular among Bengalis. Even these bhajans, he told me, offended the sensibilities of those from his hometown of Deoghar in Jharkhand, who did not know about this tradition of Devi celebration.

He argued that he, like other Hindus of his kind, had always treated gods and goddesses as part of the family. You tease them and also pray to them. Our gods and goddesses eat, drink and make merry like us. They also play mischief with their devotees – as Shakti did with Rama, when he was performing a tapasya to appease her by stealing the last Neelkamal flower he had to offer her.

This human-divine proximity is resented by the RSS, my father says. It wants to turn all Hindu gods and goddesses into warriors for its cause – the cause of violent nationalism. That is why even the Kanwariyas, who are supposed to carry the holy water to Shiva, now do it under the shadow of the Tiranga. Shiva has thus become a God bound by narrow geographical location. He has been stripped of his status as the god of trilok or the three worlds.

If this aggressive, Hindi cultural monolingualism cannot stand even a small gesture, how can it fathom the assertion of another cultural cosmology? That is why the Kali on the poster of Manimekalai’s film arouses its anger. Unlike the goddesses they are comfortable with, the poster shows her in a joyful mood. She appears friendly and bears the flag of one of the most marginalised communities. This mortal goddess, free of anger and animosity, cannot serve the cause of an ever resentful Hindi nationalism. Hence, her creator must face the wrath of those who seek to enforce a monoculture.