In the Home of Gurmeet Ram Rahim Singh's Followers

“Pitaji always used to say that he had enemies. Look, what they have done now. How they have succeeded in conspiring against him. They bought the verdict with their money.”

The house of Anita and Mukesh Narang has no nameplate outside. But like scores of houses in the state of Haryana, there is a rectangular board printed with “Dhan Dhan Satguru Tera hi Aasra” – the slogan of the Dera Sacha Sauda.

“My wife has not been keeping well since the verdict,” Mukesh says, as he welcomes us into his small living room where huge pictures of Gurmeet Singh hang on the dull green walls. In one, he poses with a large rainbow umbrella. In another he sits on horseback, holding the same umbrella. Then he is standing, grinning, under a yellow and purple umbrella in a garden on a bright sunny day.

“She has been in a trauma,” Mukesh continues, as I find even more pictures of the spiritual leader convicted in two rape cases, accused of many others, as well as of engineering murders, forced mass-castrations and illegal possession of arms.

“Come, come inside,” murmurs Anita, emerging from her dimly-lit bedroom. Her drooping, slightly red eyes signal the sorrow and bad health her husband mentioned. She switches on a light in the bedroom. There are at least seven pictures of Singh on its pale pink walls. I sit by the biggest one, where he smiles for the camera in a tight black shirt, and trousers of several shades of red and pink.

“What do I say? It does hurt when the foundation gets shaken,” she says. “Pitaji always used to say that he had enemies. Look, what they have done now. How they have succeeded in conspiring against him. They bought the verdict with their money.”

Who could his enemies be, I ask. “There are many. Oh, there are many” she repeats. “Insiders have deceived him, his own close associates. Pitaji alluded to it several times but said he didn’t have the Almighty’s permission to say their names. You can’t trust anyone these days.” 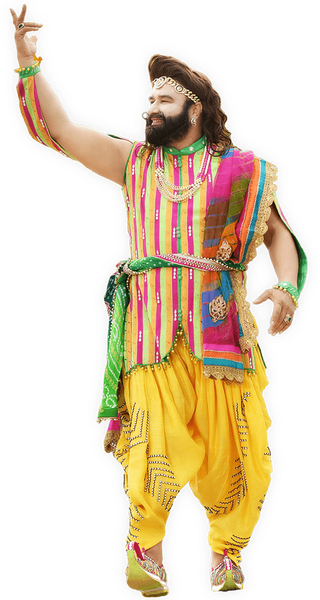 There’s a minute of silence. I look around and finally find a picture, in a small frame, of the couple’s son. Anita goes to the kitchen to bring us some sliced apples and her husband talks about how the GST has upset his work. Popularly known as ‘Masterji’ in his neighbourhood, Mukesh has worked as a tailor his entire adult life. Anita was a dressmaker too, before “Chikungunya and others” claimed her health and she gave herself to the service of the Dera headquarters in Sirsa, which she visits at least once a month. The couple has lived in and out of the Dera in the last 27 years, and survived on the dwindling income from Mukesh’s clients.

“Meenal brought most of these pictures,” Anita says, sensing my curiosity. I find what looks like a family picture above the headboard of their bed. I want to ask who is in it but I’m interrupted by Anita, who is now telling me about her 25-year-old daughter. “She is Pitaii’s daughter first, and then anything else. Until last year, she didn’t even want to marry. She was so adamant at serving at the Dera as a sadhvi for her entire life that Pitaji had to intervene and talk her into entering marriage.”

“I am usually responsible for frisking visitors – there are lakhs and crores of them. There are many tasks other sevadars do. Some cook, some clean, some are involved in farming… Whenever Pitaji is at the Dera, he conducts a spiritual session every Sunday, where he shares his purest thoughts.”

“He says that not even the smallest creature on Earth should be hurt by us. He asks us to plant trees, be kind, meditate, donate blood. You won’t believe but I wasn’t even aware of the blood donation concept; I was so naive. It was Pitaji who persuaded me and hundreds of others like me to start donating blood. My haemoglobin usually stays at seven or eight. But when I come back from the Dera after donating blood, it miraculously reaches ten. Always. Doesn’t it?” she says gleefully to her husband, who nods back.

“They allow you to donate blood at those haemoglobin levels?”

She thinks for a moment. “It’s for the greater good,” she says.

“Okay. Does he talk to you about the court cases?”

“I have told you he has many enemies. I have served the Dera for 27 years and never have I seen anything of this sort, not a hint of evil. Of course, we know about the court cases. But this is slander.”

“You know there have been stories on the possibility of mass graves at the Dera – did you hear any of them, maybe on a news channel?” I ask cautiously.

“The news is false,” she says, terse now. “Fabricated. I have stopped watching news channels altogether. It’s so upsetting and painful.” She pauses. 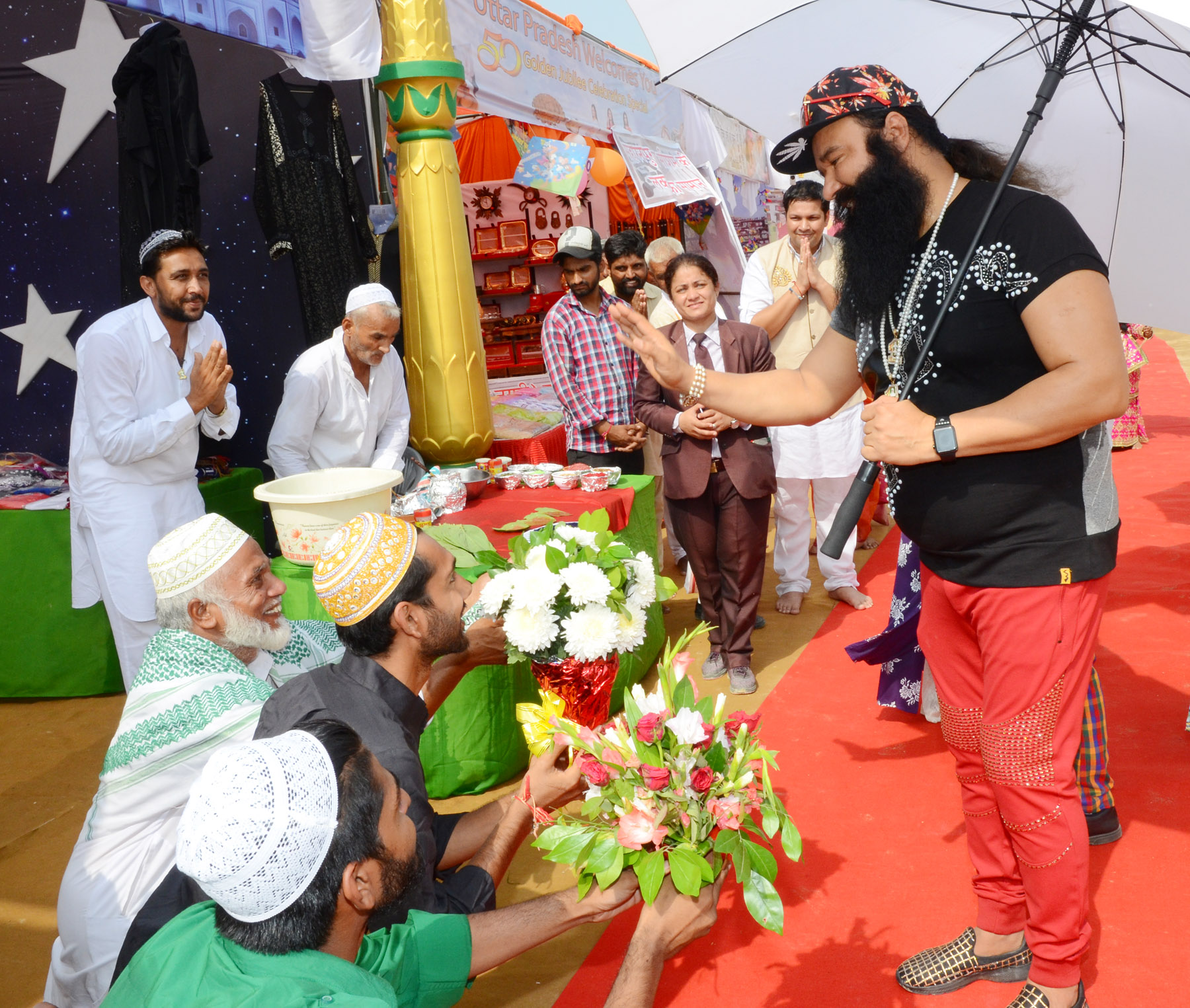 “Look,” she begins again, “The world tries to intimidate those who are onto something noble. Years ago, he rescued a woman abandoned by her in-laws and adopted her as his daughter.” She is referring to Priyanka Taneja, better known as Honeypreet Insan. “Her husband… he connived with authorities and filed false cases against Pitaji. Of course, he apologised later, along with his father, at the Dera for maligning him. But since the tide is now in his favour, he has been regurgitating bullshit again to media people. That is how Pitaji earns his enemies and pays price for his kindness.”

Also read: Why Do People Go to the Dera?

For a minute, only the creaking of the ceiling fan fills the room. Anita fiddles with a Dera pendant on a black thread, shaped like the numeral one and inscribed with pictures of  Singh and his predecessors Mastana Balochistani and Shah Satnam Singh.

When Asaram Bapu was convicted in a rape case, a massive campaign was conducted with the message, ‘Never doubt your Guru’. Pamphlets were widely distributed to his followers with the warning, attributed to Sri Ramcharitmanas: “Listening to a guru being insulted is as sinful as eating cow meat.”

On a website dedicated to the sermons of ISKCON-founder Swami Prabhupada, the religious leader says that those with doubts are “third-class devotees”, and he strongly dissuades followers from falling prey to “so-called scientists” and “so-called knowledge”.

Sathya Sai’s website states, “…do not have contact with persons who sow the seeds of fear or doubt”.

“Sadguru is the only truth in the world. That’s all I know,” Anita says. “I can spend an entire day telling you about the miracles we have witnessed after aligning our energies with the Dera.” Her eyes brighten up now. “Years ago, on a winter morning, I woke up with a jolt. Meenal was screaming and Pooja was lying still, her eyes rolled back. Froth was coming out of her mouth. My daughter was dying! Almost instinctively, or by some divine intervention, my hands reached out for my Dera pendant. I took it off and tied it around Pooja’s neck, and she regained consciousness.”

“Pitaji took a moment to diagnose her ailment while distributing the ‘healing prasad’ at the Dera,” Mukesh says.

“You might be thinking what mumbo-jumbo this is,” Anita continues. “But it happens. Like finding money under the mattress after spending the entire month’s savings on the Dera visit. I’ll tell you another story. Not so many years ago, we found our house riddled with black magic spells. We would find blood on the floor, sometimes larger-than-a-fist soap bars mysteriously appeared in unexpected corners. Priests snubbed us, but Pitaji embraced us. I don’t go to temples now.”

The couple takes me into a small room completely dedicated to “Pitaji”. It was once used for Anita’s dressmaking business. Now it holds at least 30 pictures of Singh. “We might as well shift all the pictures to this temple,” Mukesh says. “Police have been raiding the houses. They just booked two of our neighbours on charges of rioting and sedition. The poor men kept pleading, saying they did not even visit Panchkula that day, leave alone rioting. But who would listen to us? The rogue elements are out on the streets and they are booking people like us.”

“Which is your favourite picture?” I ask.

“That one,” she says. Before I tell you what it is about, remember I told you about a frame on the bedroom wall, presumably a family picture? It was Meenal and some other young girls smiling brightly for the camera, elated to be in a frame with their Pitaji.

And about Anita’s favourite picture, it is a heart-shaped paper frame on the bedroom wall, pierced by a red-and-yellow paper arrow, holding three photographs of Singh followed by three words at the apex: “Happy birthday, Meenal”.

“My brother lovingly made this for Meenal’s birthday,” Anita says.

(The names in the article have been changed.)

Romita Saluja is an independent journalist and writer. She can be reached at romitasaluja@gmail.com.