'Gau Raksha' Has Made Me a Stranger in My Own Village

Forty years ago, it would have never occurred to anyone that our Muslim neighbours were threats to our cows.

In the early 1970s, we had a chocolate-coloured cow. The cow and her she-calf would stand by our door. Every morning back then, my mother would take a bath, pray before the tulsi plant and Hanumanji idol in our courtyard, and then, with similar reverence, feed the cows bananas, water-soaked grams and other grains.

Our earthen house at Daraili Mathia village in Siwan district of Bihar had a sprawling verandah and lots of open space. In our village, Kayasthas, Yadavs, Koiris, Kurmis, Dalits and Muslim barbers had lived together for generations.

My mother would encourage me to feed the cows. To convince me that there was nothing to worry about, she would recount the story of the cows.

“Your nana (maternal grandfather) gifted a cow to your father when we got married in the 1950s,” she would say.

“The cow gave birth to the chocolate-coloured one that you see. Though the mother died long ago, the chocolate cow has grown up to be as simple as she was. She never chases or gores anyone.”

I still preferred playing with the calf. A cowherd would come every morning and evening to milk the cow. He would keep the calf tied at a distance and would leave milk for the calf to suckle on. The calf would drink her mother’s milk and for the rest of the day, she would run around while we chased her and played with her. We would tie her to her bamboo post after all of this was over.

Though I was still a child then, I was the eldest among my four brothers. Some of our neighbours also had cows, calves and oxen. Some farmers did not have cows, and I remember them being distinctly unhappy. My mother would counsel the women of those families on the benefits of getting a cow. “Tell your husband or father-in-law to somehow buy a cow. Once you have a cow, your poverty is gone. You will get milk every morning and every evening. You can sell some milk and curd to pay for kerosene oil, salt and anything else that you need to run your kitchen. The cow is a Laxmi. She will give birth to calves which will bring more wealth. If you worship the cow, she will bless you with riches,” she would tell the women.

Muslim barbers were our next-door neighbours. They too had cows and calves but they also had roosters, hens and ducks, who would frolic in the two hyacinth-filled ponds in the north and west of the village. Every morning, we would collect cow dung and pile them in a heap at our door, and the birds would come from next door to peck into the worms living in the heap. They would often be joined by storks and crows. The latter would be friendly to the cows. They would sit on the cows’ backs and peck at their bodies for bugs while the cows themselves would stand and ruminate in the afternoon sun. 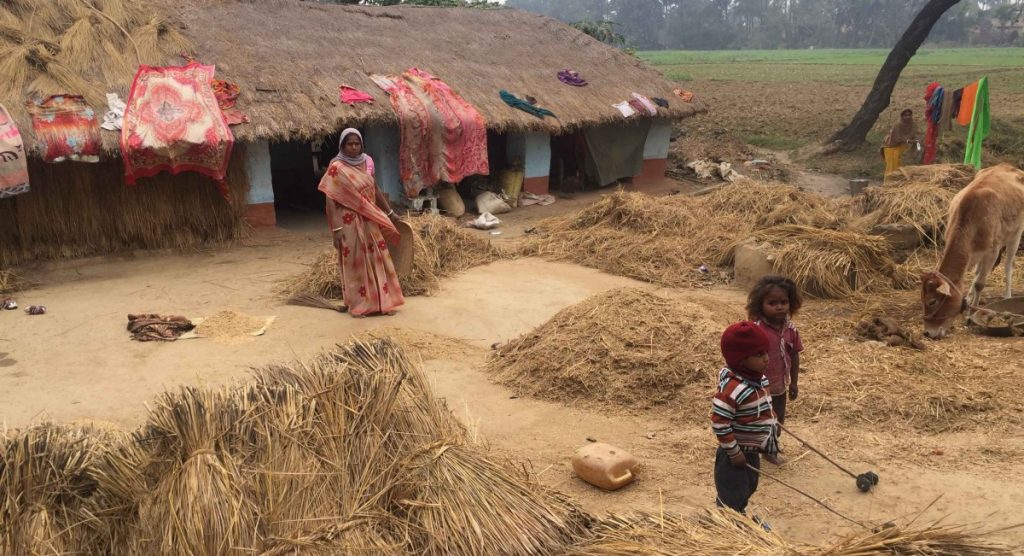 The squirrels which would surreptitiously climb down from the amla tree would scurry back when crows, or our calf or we children would get close to them. The only birds the squirrels were comfortable with were the sparrows.

We enjoyed the sight of the cattle, the calf, the hens, the ducks, the crows and the sparrows all together. We would play fearlessly with them but there was a particular black crow who had snatched away bread from my hands at least thrice.

Neither of the two houses in the village had a clock. Our Muslim neighbours had two big roosters – red and robust – who crowed loudly at the crack of dawn. Though they lived about 30 metres away, their cry would reach my grandfather’s ears first. He would wake up and jerk us out of our sleep.

After all, the cows needed the crows to weed out bugs from their skins. The chicks needed the heap of dung and hyacinth filled ponds to frolic. We needed Dulai chacha to crop our mops. Dulai chacha gave us eggs during winter with the belief that they would make us robust and ward off the chill. My mother would give Dulai chacha milk and curd.

Most of the peasants in the village – Hindus and Muslims – had distinct stories to tell about their cattle. Dulai chacha had an ox that had long and sharp horns which would chase and gore us. Patru Ahir’s cow would untie herself in the dead of the night and wander into the barley and mustard fields. There was a bull that was owned by none but belonged to all because he was needed to impregnate the cows.

It never ever occurred to us that our Muslim neighbours were threats to our cows. When it would rain heavily, Dulai chacha, who had a ramshackle mudhouse, would bring his cattle to our shaded veranda. My grandfather would protect Dulai chacha’s oxen even though we were all scared of its sharp horns.

On such rainy days, Dulai chacha’s nephew Jhulena Mia would sing a folk song or kajri while Patru Ahir would narrate the love story of Rani Saranga and Sadabrij.

The stories and songs revolved around cows, oxen, harvest and seasons – to all of which the people were intimately connected.

We waited for two festivals – Muharram (which was called Tajia festival in our village) and Chaitnavami or Ramnavami. It never occurred to us that Muharram was a festival of mourning. We loved the multi-coloured glazed paper with which Dulai chacha would decorate the Tajia. He would take months to artfully assemble it. We chanted shayars (Urdu couplets) and played with the banaithi – a stick with two wooden balls fitted at both ends – near what we called the Tajia baba. All of us – Raja, Idris, Mubaraq, Dasrath, Nadji and Suraj – took turns fanning ‘Tajia baba’ with peacock feathers.

We waited for Ramnavami too. My mother would wrap a yellow towel around an earthen pitcher of water in our puja room. For nine days, she would pray near the pitcher. At the end of the festival, she would give the towel to one of us. Then she would go to the Kali Mai temple under the huge neem tree and offer rasiaw (rice cooked in jaggery) and roti soaked in ghee. All of us got rasiaw and roti as prasad later on.

Ours was a ‘backward’ village – a world in itself. It had no roads, no electricity. A few houses had radio sets on which villagers listened to the news. There was a small post office. The postman brought in letters and money orders from the migrant labourers working in Calcutta. 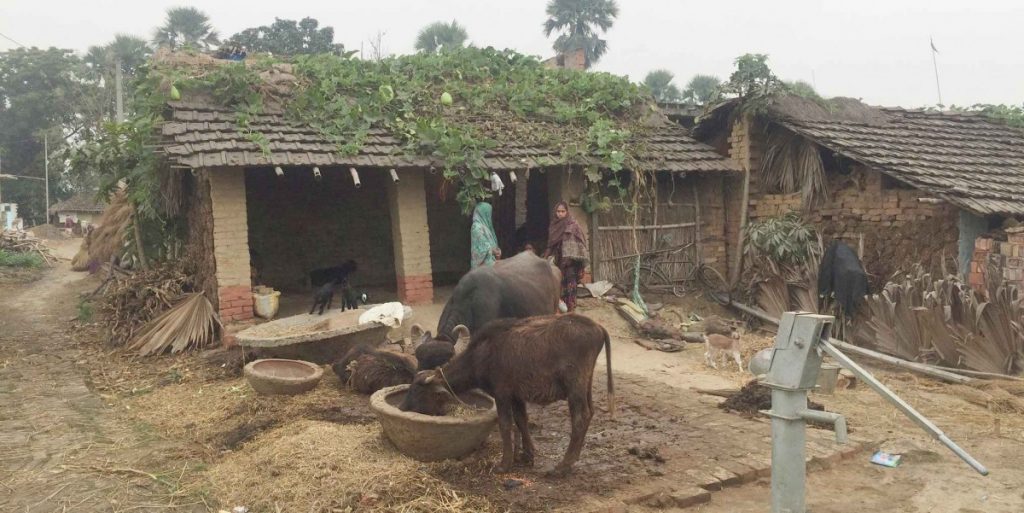 Almost 40 years down the line, the village is no more the place I was born and brought up in. It is well-connected and every household has an electricity connection. Most of the youth have mobile phones. Several houses have televisions. People are not as poor. They live in better houses.

But the cows that we had have vanished. The new generation has kept jersey cows in shelters that have electricity. They supply milk to dairy farms and restaurants. The milk is simply a product. There is no devotion or reverence involved. The young no longer worship the cows the way their forefathers did. They have machines to pick up cow dung, the cows don’t graze in the fields but survive off the fodder brought from retail outlets.

The villagers do not have oxen either. They plough their fields with tractors and reap their crops with harvesters. Dulai chacha’s progeny no longer keep hens and roosters at their door. His sons have opened a hatchery where hundreds of hens and cocks are caged. The chickens no longer visit the ponds or find dung heaps to feed off. They too live off the feed from the factories.

The squirrels are no longer there. The sparrows too have vanished. The ponds have dried. The children no longer play with the calves, birds and squirrels. They watch cartoons pictures of the birds and animals on television but are afraid of seeing them live.

Ironically, these very youths who are thoroughly removed from the manner in which their forefathers lived with cows and oxen are talking more and more about gau raksha or cow protection.

I, a non-resident villager living in the cities now, am perplexed to find them talking about cow protection when the cows themselves have vanished.

Now, the youths listen to television evangelists attired in saffron lecturing on the importance of cow protection. The more ‘knowledge’ they gain about the cows from televisions and WhatsApp, the more hostile they become against the Muslims. They sound indoctrinated in their belief that Muslims are killers of cows.

It is hard to decipher how the young are so disconnected from the values by which their ancestors have lived for generations.

To me, they look rootless even though they live in their ancestral village.

The Muslim youths too no longer mingle with their Hindu peers. They have become reserved and suspicious.

The old people who live in the village are the ones who are confused. Children no longer listen to their grandparent’s stories. Many of the songs and tales associated with cows, seasons and harvests too have vanished. So have the singers.

I had grown up hearing my grandparents chanting ‘Sitaram, Sitaram’ every morning. The young do not observe Ramnavami in the way their parents did. While their homes are devoid of puja rooms, their show of devotion is on the streets.

When I visit Daraili Mathia my eyes look and long for my chocolate-coloured cow and her calf. My ears long for kajri, the ballad of Rani Saranga-Sadabrij and all the other harvest songs. I try to engage the young in dialogue about their sweet culture but they are not interested. They appear more interested in talking about terrorism, Kashmir, Ram temple and the yoga being taught by TV evangelists.

The village and its new generation of youths are, perhaps, the microcosm of the divisiveness and atmosphere of hate growing at the macro level of our polity.

I have saved a Bhupen Hazarika song on my mobile phone. I play it when I visit my village these days.

I am a foreigner in my own land, nobody recognises me.