How the Constituent Assembly Debated (and Rejected) Citizenship by Religion

Raging arguments over who was indeed Indian were put to rest with a vote that spoke in favour of an Article 5 without religious markers. P.S. Deshmukh had been famously disappointed with the job the drafting committee had done with the citizenship provision. The year was 1949.

He had thought that Dr. Ambedkar’s definition of citizenship would make “Indian citizenship the cheapest on earth.” His grouse had been with citizenship by birth. If the draft Article was to be accepted, even a child born of a lady while she was transiting through the Bombay port would get citizenship, he argued.

Deshmukh had asked for at least two amendments.

First, just being born in India shouldn’t be sufficient, the child should be born to Indian parents. Next, all Hindus and Sikhs, residing anywhere in the world should be entitled to Indian citizenship.

P.S. Deshmukh: “I think it should refer to all those persons who are resident in India. It would be quite easy to define it…”

Shibban Lal Saxena: “Then give a definition?”

P.S. Deshmukh: “…an Indian is a very easily recognisable person [particularly when combined with domicile] But if [Saxena] thinks that an Indian cannot be recognised and that it is necessary to lay down who is an Indian, what is his colour and complexion and so on, I would leave it to him to suggest a suitable definition…”

Deshmukh had known that the Polish constitution provided citizenship to anyone born to Polish parents. His point had been that if the Poles knew who the Poles were, what was to stop Indians from knowing who Indians are?

With his proposal to give all Hindus and Sikhs citizenship, Deshmukh had expected the members to throw ‘secularism’ at him. He, for one, had felt the assembly was going too far “in this business of secularity.”

In his speech he had said:

He drew strong support from Das Bhargava, who had also said:

Sardar Bhopinder Singh, who spoke for Sikh refugees, and Rohini Kumar Chaudhury who was concerned for Assamese Hindus, had also supported Deshmukh.

Mahboob Ali Baig Sahib Bahadur, however, had spoken strongly against granting citizenship based on religion, and encouraged the assembly to remind itself of the Mahatma’s teachings of oneness in religion. 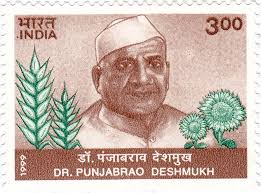 A stamp in honour of P.S. Deshmukh. Photo: Wikimedia Commons

R.K. Sidva had said that if Hindus and Sikhs were being given citizenship then the scores of Parsis living in Iran must also be considered. At the same time, specifying a particular community for citizenship in the constitution, he had said, “would look like we are ignoring other communities.”

It was at this point that Jawaharlal Nehru is understood to have stood up and said that he was unhappy with “this secular-state business being thrown about”. He had said the assembly shouldn’t be under the impression that “we have done something amazingly generous” and sacrificial by being secular.

He further said, “We have only done something which every country does except a very few misguided and backward countries…”

Alladi Krishnaswami Ayyar had echoed Nehru’s sentiment. In the grant of citizenship, Ayyar said, “We may make a distinction between people who have […] chosen another country as their home and those who want to retain their connection with this country. But we cannot [do so] on any racial or religious […] grounds.”

“I wish all the people of Pakistan should be invited to come and stay in this country.”

He insisted that Hindus and Muslims were blood-brothers and the mischief of Partition should not be allowed to spread beyond its legal fact. He went on to propose “a common citizenship for […] all Asian(s), and, as preliminary step […], common citizenship between India and Pakistan.”

Earlier in the debate Jaspat Roy Kapoor had dealt a few sharp words at Brajeswar Prasad while suggesting that the economic impact of granting citizenship to Muslims at the commencement of the constitution should be borne in mind. When Brajeshwar Prasad had his turn, he responded:

“I see no reason why a Muslim who is a citizen of this country should be deprived of his citizenship at the commencement of this constitution, (e)specially when we are inviting Hindus who have come to India from Pakistan to become citizens of this country. People who have never been in India but have always lived in the Punjab and on the frontier have come and become citizens of this State; why cannot a Muhammadan of the frontier be so when we have always said that we are one?”

The debate did not see an uncontested view on any particular citizenship-related issue.

Dr. Ambedkar made his closing remarks and said that it is future parliaments who should have their say. The constituent assembly must only enable a transition through the constitution, he felt.

The citizenship clauses were admittedly the most complex for the draftsmen to put down. They had been sent back on two previous occasions. The debates had been heated and had gone on for more than nine hours, over three days. Some members had also suggested that further debate was required.

Also read: Explained: The Nuts and Bolts of Indian Citizenship

Dr. Rajendra Prasad had wanted to put the citizenship provision to vote. To decide whether it was ready for the vote, there was yet another vote. There was 59 ayes and 35 nos.

Then this exchange occurred:

Dr. Rajendra Prasad: “Now I will have to put the various amendments to the vote…” (He was not very sure in what order though, there were 130 of them.)

Dr. B.R. Ambedkar: “Let them all be withdrawn”

Deshmukh, however, had not withdrawn his first two amendments. They had been put to vote and rejected.

Article 5 of the Indian constitution did not recognise citizenship by religion.

At the end of day on August 12, 1949, the President had adjourned the assembly to meet five days later, at 9 in the morning.

Syamanandan Sahaya had put forth an innocuous request. He had said, “May I suggest, Sir, that on the 18th we may assemble in the afternoon, in view of the fact that some trains come late?”

Indeed, the following Thursday, on August 18, 1949, the Constituent Assembly met at 3 pm.

Aditya Chatterjee is a lawyer practicing in the Supreme Court of India and High Court of Delhi.