On the 64th anniversary of Ambedkar's conversion, a look at why the Buddha's teachings are relevant in these times of diminishing equality.

Despite the popular imagery and symbols, Buddha’s heritage and his message are under constant attack. Photo: Jose Luis Sanchez Pereyra/Unsplash, (CC BY-SA)

October 14 marks the 64th anniversary of Dr B.R. Ambedkar’s conversion to Buddhism – a significant milestone towards reviving Buddhism in India. Apart from it being the biggest mass conversion in modern history, it also came without any bloodshed. He had thundered “Main Bharat Baudhmay karunga.” (I will make India Buddhist) as five lakh people took deeksha (initiation) in Nagpur.

Even before the conversion, Ambedkar had been working to adopt many Buddhist symbols that are now a part of our day-to-day lives. A majority of India’s national symbols and images have footprints of Buddhism. Our national flag has a bright navy blue wheel, known as the Ashoka Chakra, in the centre. This wheel, which depicts progressiveness, is taken from the lion capital of Ashoka in Sarnath raised across the country during the Mauryan empire by king Ashoka, who ruled and spread Buddhism in Asia.

Our national emblem, which is also a part of all official documents – including the Indian currency – is a sculpture of four Asiatic lions standing back to back on the Ashok chakra. Durbar hall – which hosted the swearing-in of India’s first government – is one of the most exquisite halls in Rashtrapati Bhavan and has a beautiful Buddha sculpture dating back to the Gupta period.

From these examples, it would appear as if India has already adopted Buddhist principles by preserving its rich heritage and culture, which has spread globally.

So when Prime Minister Narendra Modi invoked India’s gift of peace-loving Buddha to the world in his UN General Assembly speech, he was echoing the widely known.

And yet, he faced criticism for invoking Buddha abroad but supporting Hindutva back home. Interestingly, one criticism came from his supporter and a Hindutva votary for invoking Buddha. Manohar Bhide, whom the PM calls his guru, lamented Modi’s reference by saying, “PM Modi was wrong in saying India gave Buddha to the world. Buddha’s message of peace and tolerance is of no use now.”

Bhide, a Brahmin, who heads the Shiv Pratishthan Hindustan, is accused of playing a role in the Bhima Koregaon caste-violence case but was never arrested. This was allegedly due to the Devendra Fadanavis government in Maharashtra supporting Bhide and his organisation. Hardly any BJP member has opposed Bhide’s statement.

Is the criticism of Buddha new? In the Nagpur conversion ceremony, Ambedkar responded to criticism of the Buddha by the Brahmins, saying, “Brahmins used to say, ‘Hey, you!’ [Bho Gautam] to Bhagvan.. Brahmins [thus] spoke slightingly of the Buddha…But only one name is proclaimed throughout the world, and that name is Buddha.”

Buddha as a revolutionary

In Bhide’s criticism, lies an attempt to not just pit Buddhists against Marathas, but also to limit Buddha to a philosophy of peace and non-violence. In the guise of targeting his message of peace, the likes of Bhide actually criticise Buddha’s revolutionary message of the annihilation of the caste system and unscientific yagnas and rituals.

When Buddha’s message spread outside India and Asia, Brahminical forces tried to appropriate him falsely either as the ninth avatar of Vishnu or by calling Buddhism another branch of Hinduism where Buddha “propagated values like mercy, love, compassion, and affection” (note the absence of social revolution).

Ambedkar was very well aware of these designs. He wrote, “Buddha is generally associated with the doctrine of ahimsa. That is taken to be the be-all and end-all of his teachings. Hardly anyone knows that what Buddha taught is something very vast; far beyond ahimsa.”

In his book Buddhist Revolution and Counter-revolution in Ancient India, Dr Ambedkar wrote:

While Buddha showed the unique path of enlightenment or self-realisation using noble eight-fold path, it was his revolution against the social evils and his fight against the Chaturvarnya (varna system) that made him a revolutionary.

Buddha’s fierce attack on the Chaturvarya actually irked the beneficiary of the social system —namely the priestly class. 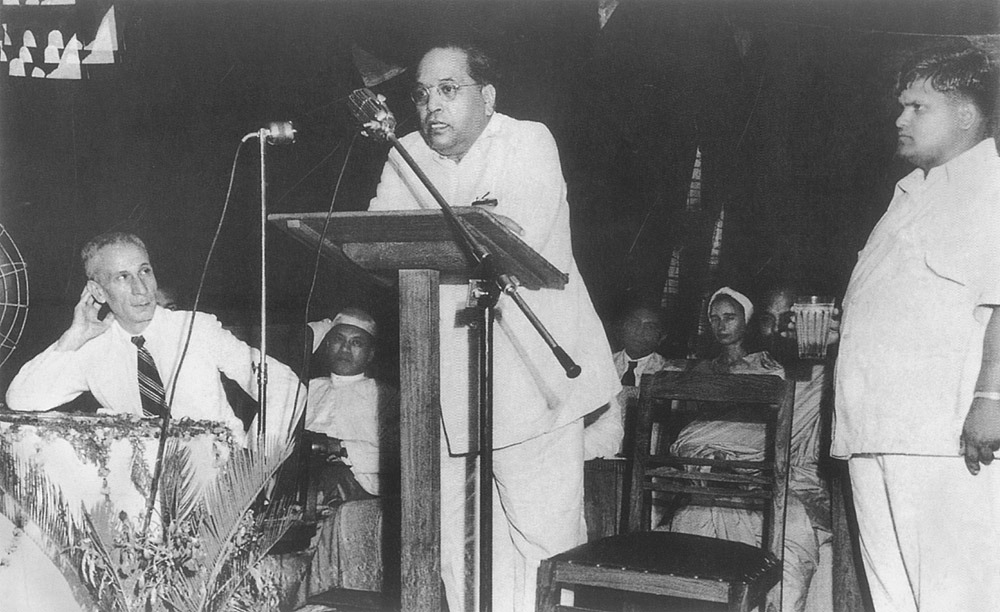 On May 20 1951, Ambedkar addressed a conference on the occasion of Buddha Jayanti organised at Ambedkar Bhawan, Delhi. Photo: Wikepedia/ public domain

In his book Buddha and Karl Marx, Ambedkar wrote,

“Buddha preached against Chaturvarnya. He used some of the most offensive similes in attacking the theory of Chaturvarnya. The order of Chaturvarnya had been turned upside down. Shudras and women could become sannyasis, a status which counter-revolution had denied them. Buddha had condemned the Karma kanda and the Yajnas. He condemned them on the ground of himsa or violence.”

So each time our ISRO scientists seek divine blessings ahead of the launch of Chandrayaan, or our defence minister indulges in unscientific acts like placing a pair of limes under a fighter jet or our HRD minister does what the IIT Bombay students call a “scientific blasphemy” at a convocation ceremony,  or a house speaker cites the supremacy of Brahmin caste, we betray Buddha’s revolutionary teachings.

Also read: An Eyewitness Account of Ambedkar’s Political Trials in Converting to Buddhism

Despite the popular imagery and symbols, Buddha’s heritage and his message are under constant attack. Many of his stupas and Vihara have been either compromised or encroached upon. A case in point is the Ekvira Devi temple in Maharashtra. None other than Prabodhankar Keshav Thackeray, Uddhav Thackeray’s grandfather, wrote about how Hindu priests had encroached on this Buddhist cave in his book Devlancha Dharm Ani Dharmachi Devale.

The world-famous Ajanta caves in Maharashtra dating back to second century BCE would have met similar fate if it had not been for a Rs 400 crore aid from the Japanese government in 2002 to the Maharashtra government to preserve this historic site of Buddhism.

Ambedkar, thorough his historic conversion and drafting of the Constitution, revived Buddhism in India. That is one reason why the priestly class or beneficiaries of the chaturvarnya (caste system) still detest the Constitution, the very guiding document that promotes a scientific spirit and a bahujan hitay spirt, by calling it not reflective of ‘India’s culture’.

Despite being home to Buddha and his enlightenment, his birth anniversary isn’t even a public holiday across the country like Gandhi Jayanti, Christmas or Republic day – something Ambedkar fought for.

Buddha’s teachings nevertheless have survived all these challenges as Buddhism has spread to western countries. So instead of opposing Buddha’s revolutionary ideas of equality and reason, the latest attempt seems to be to limit him only as a messenger of non-violence and peace.

The anniversary of Ambedkar’s conversion is a timely reminder to study and inculcate Buddha’s revolutionary ideas in these trying times of diminishing equality, shrinking fraternity and an almost dead scientific temper.