BJP, Kaali and the Lingering Malaise of Bengal's Hindu Nationalism

The ongoing contestation over which representation of Kaali is authentic is puerile at one end and points to deep roots of Hindu nationalism in Bengali culture on the other. 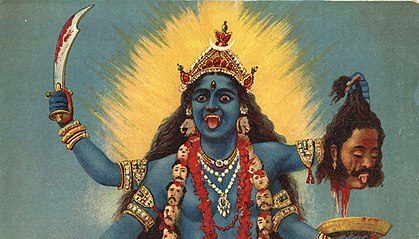 As the row over representation of goddess Kaali continues to simmer, addressing the centenary celebrations of Swami Atmasthananda, 15th president of the Ramakrishna Math, Prime Minister Narendra Modi said:

He further added that the “blessings of Maa Kaali are always with the country, which is moving ahead with a spiritual energy for the welfare of the world”.

One, if not the most, cited of Ramakrishna Paramahansa’s principles – “joto mot toto poth” (there are as many paths as there are opinions) – unequivocally underlining the equality of all religions carries special significance in today’s fractious environment. A household saying in Bengal, Ramakrishna’s widely circulated quote bears testimony to the mystic’s devotion to religious pluralism and eclecticism. This is also borne out by his complex spiritual reflections, practice of different faiths (including Islam and christianity), and relationship with goddess Kaali.

In an earlier article on The Wire, scholar Pralaya Kanungo cited the mystic’s vision as presented by Ramakrishna Mission: “A lake has several ghats [bathing places]. At one, the Hindus take water in pitchers and call it “jal”; at another, the Mussalmans take water in leather bags and call it “pani”. At a third the Christians call it “water”.

Can we imagine that it is not “jal”, but only “pani” or “water”? How ridiculous! The substance is one under different names, and everyone is seeking the same substance; only climate, temperament, and name create differences. Let each man follow his own path. If he sincerely and ardently wishes to know God, peace be unto him! He will surely realise Him!”

Like Ramakrishna, the goddess Kaali’s place in Bengali culture and society has to be appreciated in its context. Consider Kaali’s unusual iconography.

The most common of her many representations depicts the goddess, bare-bodied, her long and wild hair flowing around her. Around her neck hangs a necklace made of skulls, a skirt of limbs falls from her waist. Two of her arms carry a severed human head and a sword, while the other two gesture fearlessness and blessing. 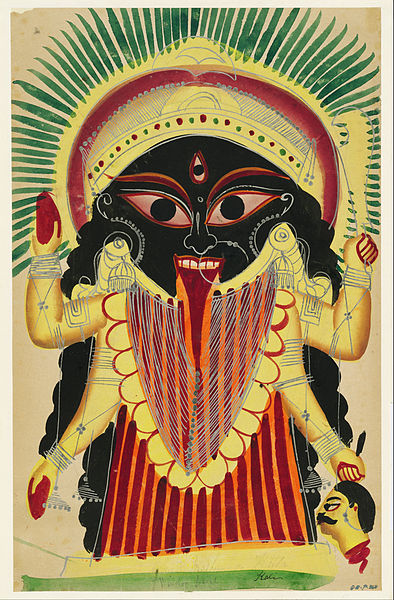 In some representations, one of her arms cradles a cup into which flows the blood of the evil demons Kaali has slain. The goddess’s foot rests on the prostrated body of her consort Shiva, her tongue out, seemingly in surprise at stepping on her husband. Or so goes one popular interpretation.

However varied such representations, in her version of feminine power, Kaali conveys an imagination of shakti distinct from that embodied by Parvati and Durga.

Growing up in Bengal, I remember the aura around the midnight Kaali puja to be somewhat at variance from the ambiance surrounding Durga or Lokkhi Pujo. There was a certain subversive quality to Kaali worship. A certain thrill of worshipping a deity embodying the fearlessness that many, if not all, aspired to.

Until recently, animal sacrifice was a routine practice at Kaali Pujo. Even when that practice ended at many sites of worship, people still eagerly waited for a spicy dish of mutton. Far from frowning upon alcohol consumption, the mood of revelry on the occasion keenly anticipated its exuberant headiness.

Also read: Kali Faces the Wrath of a Hindi Colonialism Out to Destroy the Traditions of Her Followers

Like most myths built around deities, those around Kaali – who symbolises time, destruction and creation – are rooted in the idea of destroying evil and protecting the vulnerable. Arguably, the portrayal of an enraged goddess manifesting rage has, over decades, drawn to her a large number of Bengalis cutting across classes and castes. Feminists, too, have embraced Kaali as a symbol of agency and power. Kaali, therefore, represents (among other things) an image of shakti militating against safe, orthodox cultural mores.

The ongoing row and deeper issues

Given these well-established traditions around Kaali Pujo, the row which has erupted over Trinamool Congress MP Mahua Moitra’s comments does indeed feel childish. True to character, and driven by its political and ideological agenda, the Bharatiya Janata Party (BJP) has gone all out to impose the party’s will on religious practices that sit uneasily with the idea of a homogenised Hindu culture and religion. However, rather than back their own leader, the Trinamool Congress (TMC), too, has condemned Moitra’s comments.

Such condemnation runs against the party’s feted approach to Bangla nationalism, which it successfully leveraged against the BJP in the 2021 assembly elections. The BJP was then projected as an organic party of the Hindi heartland, indifferent to, if not oblivious of, Bangla language and culture. The TMC argued that the BJP’s homogenous vision of cultural nationalism was antithetical to Bengal’s cultural and religious practices.

Mamata Banerjee herself popularised the slogans of “Jai Durga” to counter BJP’s “Jai Shri Ram.” If anything fatally hurt the BJP in Bengal, it was the politics of Bangla nationalism. The top BJP leadership could not dent its well-constructed cultural armour. Now, the consequences of echoing the BJP in matters of cultural nationalism may blow back on the TMC.

But equally importantly, the row over Kaali draws attention to a deeper malaise. As the number of those whose “sentiments” are “hurt” and “offended” grows by leaps and bounds, any hint of complexity and heterogeneity is expunged from religious practice under the threat of first information reports (FIRs).

Many of Bengal’s most cherished icons – Ramakrishna, Bankim Chandra Chattopadhyay, Swami Vivekananda, and, of course, Kaali herself – bear testimony to the fact that recent shifts in the state’s politics cannot be understood without acknowledging the deep roots of Hindu nationalism in Bengali culture.

While this history gives important clues to the BJP’s rise in the state, and the TMC’s recourse to cultural nationalism in response, it goes without saying that turning to this aspect of Bengal’s past to determine its future is a deeply fraught affair.