While Raksha Bandhan is mentioned profusely in the Bhavishya Purana, Bhagawat Purana and Vishnu Purana, Bhai Dooj appears to have arisen out of folk traditions.

On Bhai Dooj sisters have always prayed for the safety of their brothers, by performing a small aarti ceremony and applying a tilak on the forehead of their brothers. Photo: Marji Lang/Flickr, CC BY 2.0

It is rather astounding that India is the only country in the world that reserves two special celebrations for siblings to shower their affections on each other. The first being Rakhi or Rakshabandhan while the other is Bhratri Dwitiya which is popularly known as Bhai Dooj in north India.

In Bengal, the festival is called Bhai Phota and the same day is observed as Bhai Beej or Bhau Beej in Maharashtra, Gujarat and the Konkan. In Nepal, this Bhai Tika is almost as important as Dussehra and it is also called Yama Dwitiya in South India. While most parts of India consider Bhai Dooj to be an integral part of five-day festival of Diwali, Bengal just has to differ. 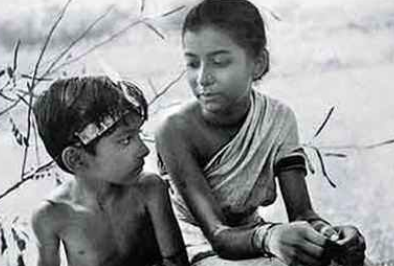 A still from Satyajit Ray’s ‘Pather Panchali’ where young Apu and his sister Durga’s friendship is shown with particular grace.

It celebrates Deepawali, the glorious night of bright lights, as the darkest night of the year and worships Kali, not Lakshmi. In the same dissident vein, it treats Bhai Dooj as a distinct ritual that comes two days later — and true Hinduism, as we shall see, has always respected variation and dissent. On Bhai Dooj, by whatever name we call it, sisters have always prayed for the safety of their brothers, by performing a small aarti ceremony and applying a prominent tilak or tika on the forehead of their brothers — as a talisman against any danger or misfortune.

Supposedly, Krishna’s sister, Subhadra, was so delighted to see him unharmed after his battle with the evil demon Narakasur that she applied a sacred tilak on his forehead. This is supposed to have inspired Bhai Dooj but frankly, this tilak of protection may actually have been more useful before Krishna went to battle.

While there are not many references to Bhai Dooj in sacred literature, it appears to have arisen from folk traditions. On the other hand, Rakhi or Raksha Bandhan is mentioned quite profusely in Bhavishya Purana, Bhagawat Purana and Vishnu Purana. Hinduism has always found a place for folk festivals and rituals, as have other major religions of the world.

The real spirit of Hinduism has always been more accommodative and tolerant of all — not rigidly standardised as some are insisting in recent times. Besides, the Shastras do not usually get into religious practices where the priest or purohit has no role because the chances of securing economic benefits, like daana or dakshina in such cases, are remote.

Also read: India’s Many Diwalis, Proof of the Unity that Comes Through Diversity

But justificatory sacred tales are a must and the most convincing story of the origin of Bhai Dooj recalls that on this day, Yama, the god of death, meets his sister, Yamuna, which calls for a great celebration. In the British colonial records is an interesting account given to the Asiatic Society by the famous orientalist, Horace Hayman Wilson, more than two hundred years ago. He mentioned that Indian sisters believed “that by this means the lives of their brothers will be lengthened and Yama, the regent of death, will have no power over them”.

Wilson quotes the favourite lines of sisters who said then, as they do even now in many parts of India:

“On my brother’s brow I have made this mark
And thus have I bolted the door of Yama!”

Indologist Wilson also notes that the sisters go out of their way in “feasting brothers with every kind of delicacy they can afford and the brothers give them gifts of cloth and money”. A century ago, we find another comment by British commentator, Muriel Marion Underhill, where she said that “the chief feature of this festival is to celebrate Yama’s dining with his sister Yamuna….and since Yama shut his house this day while visiting his sister, no one dying today will have to go to Yama’s abode.”

She records the ritual of gifts and of the grand meal but she also states that “some worship Yama at noon, making offerings to his image, and those who have the opportunity bathe in the river Yamuna”.

Since Yama and Yamuna were so important, we may also consult some more serious work by professor Sukumari Bhattacharji, whose famous book Indian Theogony gives a scientific study of our rituals and deities. She says that “in the early times, Yama was conceived chiefly as a twin, with Yami as his female counterpart. As he grew complex in stature, taking on malevolent traits, his partner became a malignant goddess, Nirrti, taking over the dark non-Aryan earth-goddess’s functions” and became associated with evil spirits.

Bhattacharya then traces how this Yami of the Taittiriya Brahmana became the river Yamuna in the Puranas, ie, the river of dark water or Kalindi. The early Aryans who had settled in the Sapta-Sindhu (Indus) region managed to traverse the Malwa plateau, but were apprehensive of crossing the Yamuna.

There were dark stories about the Yamuna and it was believed that mysterious, powerful people and many other challenges lay across this river. As we know from later accounts, once they overcame the Yamuna and then the Ganga, the Sanskrit speaking Aryas chose this Ganga-Yamuna Doab as their sacred land, “Arya-varta”.

Some feel that the other brother-sister festival, Rakshabandhan, had risen most likely from (or had connections with) Naga Panchami since the two dates are usually very close to each other — during the height of the rainy season. This is when sisters prayed hard for the protection of brothers against snake bites. But the fear of snakes was far less in late autumn or early winter and this could not be the reason for the second festival for brothers and sisters, when many men would venture out for trade, occupation or war — now that the rains had ceased.

With the change of seasons, diseases invariably broke out, as happens during spring as well. This could be a provocation for sisters to pray, in order to ward off death and Yama, before modern medicine often forced Yama to defer his plans of action. This Bhai Dooj in the month of Kartika (October-November) marks the end of the season of festivals and rituals that had begun with Navaratri. This is also when akash pradeeps or sky lanterns are foisted on rooftops to guide spirits, while sisters in south India light lamps once again few days after Diwali, during Karthikai Deepam, to pray for their brothers.

America has now started having a ‘Sisters’s Day’ and a ‘Brothers Day’ in August, but these can hardly compare to our ancient traditions. Another attempt has been made in the West through a new “Brothers and Sisters Day” in May, but it appears to be one more occasion for the billion-dollar card industry to make profits.

So why does India remain unique in this celebration? The mark (tika) applied on the forehead of brothers during Bhai Dooj started originally as a charm against disease and death. To the extent possible, traditional rituals are still observed, with brothers being made to sit on the floor — rickety knees notwithstanding. Special seats are often made for then in many states, often with rice flour or on wood on even on handwoven mats.

Also read: Guru Purnima Has Its Roots in Buddhism and Jainism, Not Hinduism

The tika ceremony invariably follows age-old rituals and even the most modern sisters apply the same sacred paste and bless them with the same lighted lamp during aarti that their great-great grandmothers had done — with rice, fruits, flowers, betel leaves and nuts, and coins. While in Nepal, sisters put seven colours on their brother’s forehead, different regions of India follow their own customs.

Bengali sisters, for instance, place black tilak marks on their brothers’ foreheads, to ward off the evil eye and then apply sandalwood paste. This is followed by delicious dishes where India’s ‘unity in diversity’ comes to the fore. While special sweets called khajas were compulsory in Bengal, Maharashtrians invariably enjoy a sweet dish ‘basundi poori’.

The fact that such celebrations continue in India, despite giant strides made by science and medicine, speaks volumes of our history and culture. In the past, ancient Indian traditions mandated that women be married off quite far away, into the desired sub-caste to spread and preserve the vitality of the gene pool.

But if sisters lived at such great distances, there had to be mandatory festivals that brought the siblings together, otherwise, the strength of India and her timeless family system, would not survive. As for brothers, what could be a better incentive than a sumptuous meal, given with so much love and care?