The mosque will be without any minarets or domes that have stereotypically been associated with Islamic architecture in India. 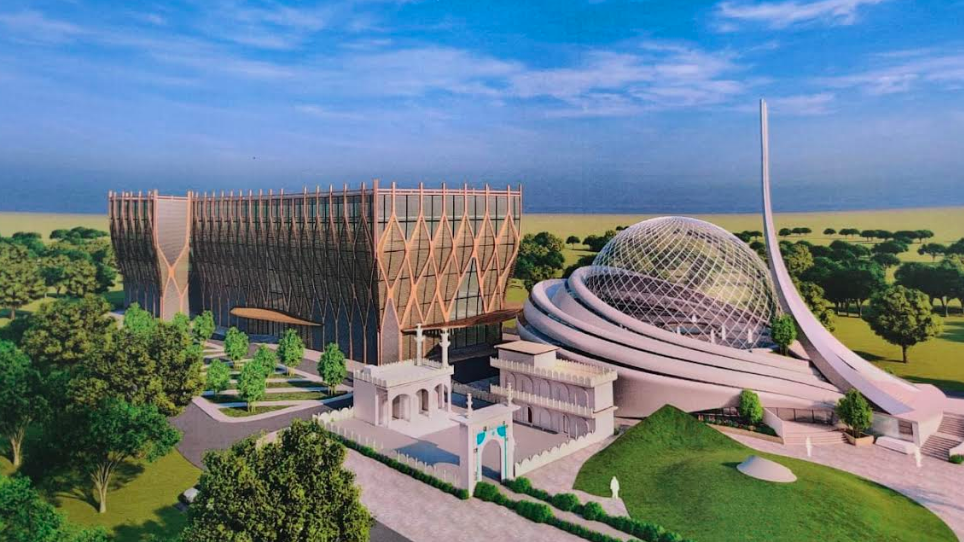 The blueprint of the new Ayodhya mosque. Photo: By arrangement

Ayodhya: The Ayodhya mosque, to be built on five acres of land as mandated by the Supreme Court, will have a “cosmic” design resembling the spherical earth cushioned in space.

Most importantly, it will not have the stereotypical domes, minarets or arches, which marked Islamic structures in India, said architect Professor S.M. Akhtar, who along with other members of the Indo-Islamic Cultural Foundation (IICF) unveiled the mosque complex’s blueprint on Saturday.

The rectangular layout of the complex in Dhannipur village also includes a speciality hospital, community kitchen and a museum housed in a multi-storey vertical structure. These will be metres away from the mosque and a century-old Sufi shrine will be in between.

The mosque will be able to accommodate 2,000 namazis at a time and will be four times bigger than Babri Masjid. The 300-bed hospital complex will be six times the size of the mosque.

“Zero carbon footprint will be the defining theme of the mosque complex, keeping in mind global climate change,” said Athar Hussain, secretary of the IICF.

“Saplings from forests across the globe, including the dense Amazon forests, will be brought to Dhannipur and planted along the mosque to send a green message along with tidings of peace, harmony and communal amity,” he added.

Professor Akhtar, the dean of the faculty of architecture of Jamia Millia Islamia University, who designed the mosque complex said the mosque’s architecture is unique when it comes religious structures across the world. “This round-shaped mosque imbibes modernity breaking away from the past and will mirror the future in the truest spirit of Islam. We are also laying emphasis on hospital, library and other facilities to serve society,” said Akhtar.

President of the Trust, Zufar Faruqi, and secretary Athar Hussain were present at the unveiling ceremony while Akhtar and curator Pushpesh Pant joined in through a video link.

Pant said, “The true spirit of India lies is multicultural society, which we will call Ganga-Jamuni tehzeeb. We will develop a centre that will heal and feed humanity in true spirit of Islam. The first step for mankind is providing healthy food and the community kitchen will begin serve Awadhi cuisine, which may include ‘gosht-roti’ ‘tehri’ and ‘puri-sabzi’, an amalgamation of the tastes of Awadh from Lucknow to Faizabad and Jaunpur to Benaras.”

The mosque will be built on 3,500 square metres of land while the hospital and other facilities will straddle an area of 24,150 square metres. Work on the project will begin immediately after the blueprint is passed by the Faizabad panchayat district board. The structure is expected to be ready in two years.