The All India Muslim Personal Law Board Continues to Be Regressive

The board seems to have forgotten its progressive roots, instead choosing not to support fights for gender and social justice. 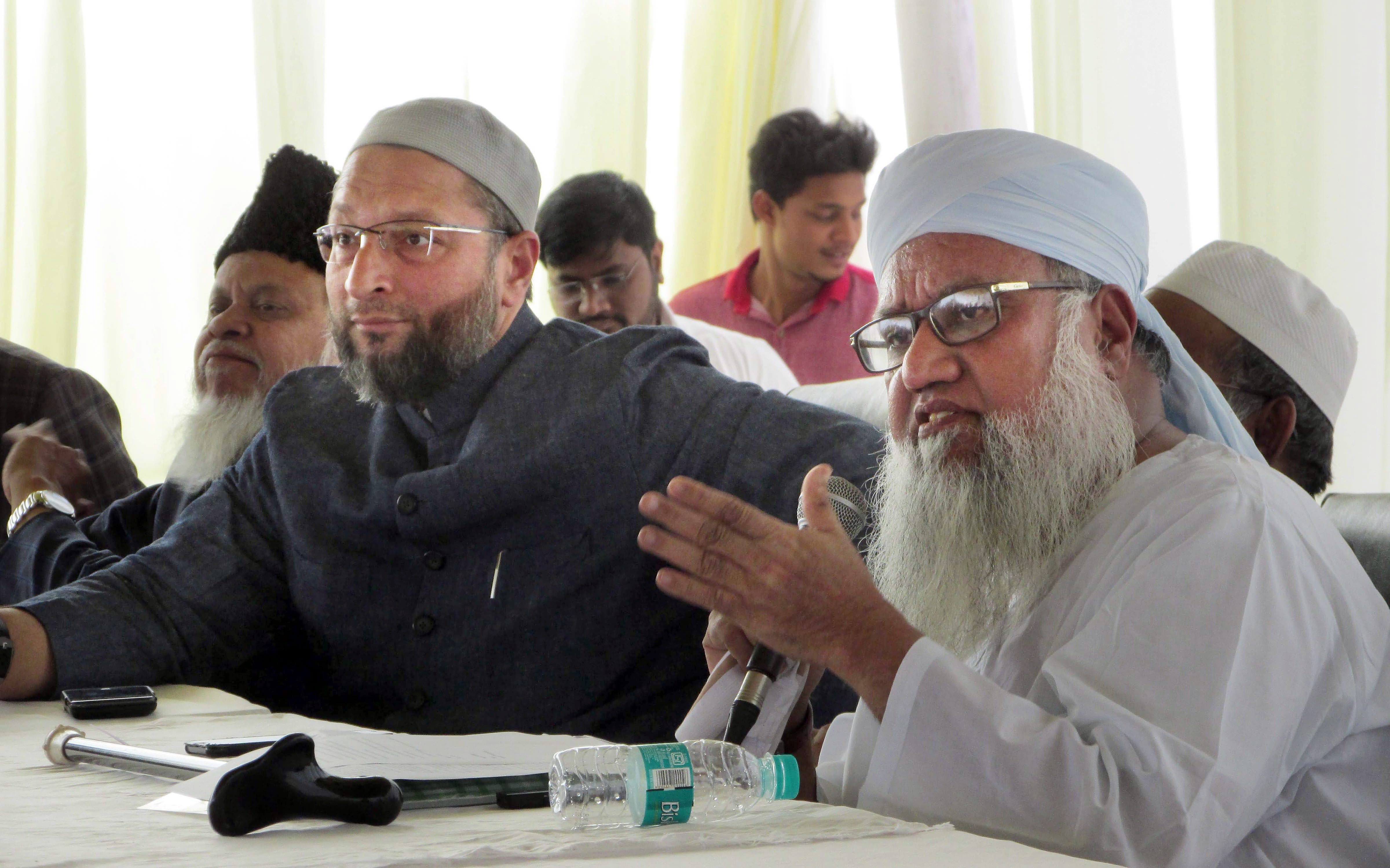 On February 10-11, 2018, the 26th plenary session of the All India Muslim Personal Law Board, comprising the ulema, took place in Hyderabad. There were two stated agendas: the Babri Masjid and triple talaq.

Just before this meet, one of the members of the board, Salman Nadvi, had already entered into some kind of negotiations with Shri Shri Ravi Shankar, reportedly for some kind of out-of-court settlement. Informed observers from the community are under the impression that Nadvi is emulating Zafar Sareshwala in becoming close to the prime minister. This impression has been building for a while now.

People like Ravi Shankar and Ramdev are often identified with the current regime. Informed segments of the community were therefore already quite apprehensive about the AIMPLB as a whole. They saw this negotiation as an exercise in cozying up to the central government.

It is surprising that while the Babri Masjid matter is sub judice, some members of the organisation felt there was still a rationale behind deliberating on it. Why not let the law take its course and wait for a verdict? What are the political implications of such deliberations?

This kind of back-room negotiation is nothing but a brazen subversion of the judiciary as an institution. This is even more true because Nadvi did not take the AIMPLB along. Nadvi and his colleagues have anyway been all but discarded by the board – they hardly carry any representative status.

What’s happening now appears to be a repeat of what the ulema did in 1986, when they forced the then government to legislate against the Supreme Court verdict in the Shah Bano case, in favour of maintenance for a divorced woman. They certainly punched above their weight then, harming the institution grievously. This had fuelled a reaction from the Hindu right-wing – a group that has been only growing since then, so much so that they are now a hegemonic political force.

Yet, the educated middle class of Muslims, howsoever small it may be, has not had the courage to speak out and persuade the community to put enough pressure on the clergy to initiate relevant reforms, despite their discomfiture with the AIMPLB.

The regressive state of affairs within the community on this specific issue can be gauged fully only when we revisit the Shah Bano case.

Shah Bano married Mohammad Ahmad Khan in 1932. Khan was a successful lawyer. The couple had three sons and two daughters. In 1975, Bano was driven out of her home in Indore. In April 1978, she filed a case for maintenance of Rs 500 a month, under Section 125 of Criminal Procedure Code. In November 1978, Bano, then 62, got divorced. In court, the judge said that even under Muslim law, Khan was bound to pay his former wife maintenance.

In 1986, when Shah Bano was 70, her arduous judicial victory was upturned by legislative tyranny. Politicians had succumbed to the conservative elite of the Muslim minority, led by the AIMPLB. But the AIMPLB, which claims to have the support of a large cross-section of the community, never looked back to see how Shah Bano was managing financially. Nor have they been concerned about other such women or supported those fighting their oppressive husbands.

Recently, the Supreme Court invalidated instant triple talaq. The AIMPLB did not endorse the Supreme Court decision, displaying their lack of trust in the judiciary once again. Soon after, a Bill was passed in the Lok Sabha. This Bill explicitly refers to the stand of the AIMPLB in the court, that triple talaq can be outlawed only through legislation. Yet, the AIMPLB did not prepare a draft Bill of its own for debate.

About this Bill, a Muslim friend of mine, a senior police officer, said,

“I welcome it. Not too enthusiastically, though. Some serious constitutional questions, not to mention many jurisprudential quibbles, have been raised. It is hard to ignore them. It is a bad law, in intention, in conception, and so it will be, in execution. A much abused law it is going to be. But that is the flip side of it. In totality, this is the need of the hour to save the Supreme Court’s judgement from subversion at the societal level. One of the shortcomings I find in this law is that the maulvis who are still going to uphold the validity of triple talaq have not been brought in its ambit. They, the real culprits, should be made liable to double the punishment as handed to the man guilty of this crime. Also, such divorce-mongering maulvis who pronounce the annulment of marriage at such outlandish grounds as someone offering prayer behind an imam of another sect should be sentenced to a minimum of seven years in jail. Nothing has harmed the Muslim community more than the self inflicted wounds of fatwa issued by malignant maulvis.”

Women’s rights activists, including those from the Bhartiya Muslim Mahila Andolan, have welcomed the proposed Bill and have also suggested ways of strengthening it. However, the clergy is not engaging with such activists, just as they are not engaging with those compiling field reports on caste-based discrimination within Indian Muslims.

The clergy does agree with the interpretation that instant triple talaq is wrong or un-Quranic. Yet they stubbornly refuse to declare its prohibition. They are also dismissive about the fact that most Muslim-majority countries have already banned the practice.

The AIMPLB was expected to introduce a model nikahnama (Islamic marriage contract) “that would obligate grooms to vow against the use of instant triple talaq”, but it maintained a curious silence on the key issue. The AIMPLB refrained from bringing out a model nikahnama because such a model will have to make it explicit that in accordance with the Supreme Court verdict, instant triple talaq is illegal. They are obviously reluctant to enter this particular statutory territory. With this kind of intransigence, it is hardly surprising that the clergy is seen as an impediment in the way of social reforms and gender justice.

Muslim entrepreneurs, who often sponsor the extravagant sessions of the ulema (who are otherwise expected to be quite frugal), should therefore rethink their priorities.

Another vital issue that the AIMPLB has been refraining from addressing is the sub-sectarian rivalries and communal conflicts because of certain religious rituals performed or processions brought out in the public sphere.

Rivalry and competition among certain sub-sects (maslak) is giving rise to the assertion of maslaki identities in the public sphere. This assertion often leads to communal clashes – both inter-maslak and inter-religious (Hindu-Muslim). Consider some of the developments that have begun to take place over the past few decades or so For instance:

The clergy, however, hasn’t felt the need to issue an appeal that loudspeakers be avoided.

The board is so exclusionary that Nadvi asked the Shia Board to stay clear of the Babri Masjid issue. According to Nadvi, this was an exclusively Sunni issue. Nadvi’s influence on the board can be gauged by the fact that in the two-day plenary session, the AIMPLB could not take the decision to expel Nadvi from the organisation’s executive committee. They first put it in abeyance and then hours after wrapping up the session, made it clear that they had expelled Nadvi. This expulsion has been issued only under community pressure.

The moving spirit behind the foundation of the Personal Law Board was Minatullah Rahmani (1912-91). Rahmani was associated with the Imarat-e-Shariah, which was founded in 1921 at Patna, under the auspices of Maulana Azad. It fought both British colonialism and the Muslim League’s communal separatism. The founder of the Imarat-e-Shariah, Maulana Sajjad (1880-1940), not only chastised Jinnah and his two-nation theory, but also insisted on the fact that religious rituals must be confined to the private sphere. He deliberated upon the limits of religious rights in a multi-religious society like India, and talked about principles that could be used to resolve communal issues. This was his way of fighting the competitive communalism of the late colonial era.

Today, when once again communal polarisation is rising on an unprecedented scale, the clergy, as well as other segments, need to persuade their respective communities to confine rituals to the private sphere as much as possible. It will be instructive for the AIMPLB ulema to revisit their own history of inclusivity, plurality and justice.

True, an appeal from the ulema of Deobandi maslak on these practices, which are essentially associated with the Barelvi maslak, will invite a reaction from them. Therefore, the Barelwi ulema from the Personal Law Board and beyond should intervene to dissuade the community from using loudspeakers.

By refraining from such reformist interventions, the clergy is increasingly being discredited. The board’s meet in Hyderabad should have addressed these pressing and burning issues. Instead they held another extravagant meet, giving one more tool to the majoritarian right wing.

The near silence of the educated middle class of Muslims on all these issues is equally harmful. It is sad that even university teachers and researchers from the community have not been able to speak out and mount enough pressure on the AIMPLB to mend their ways and move towards gender and social justice.

Mohammad Sajjad is a professor in the Centre of Advanced Study in History, Aligarh Muslim University.