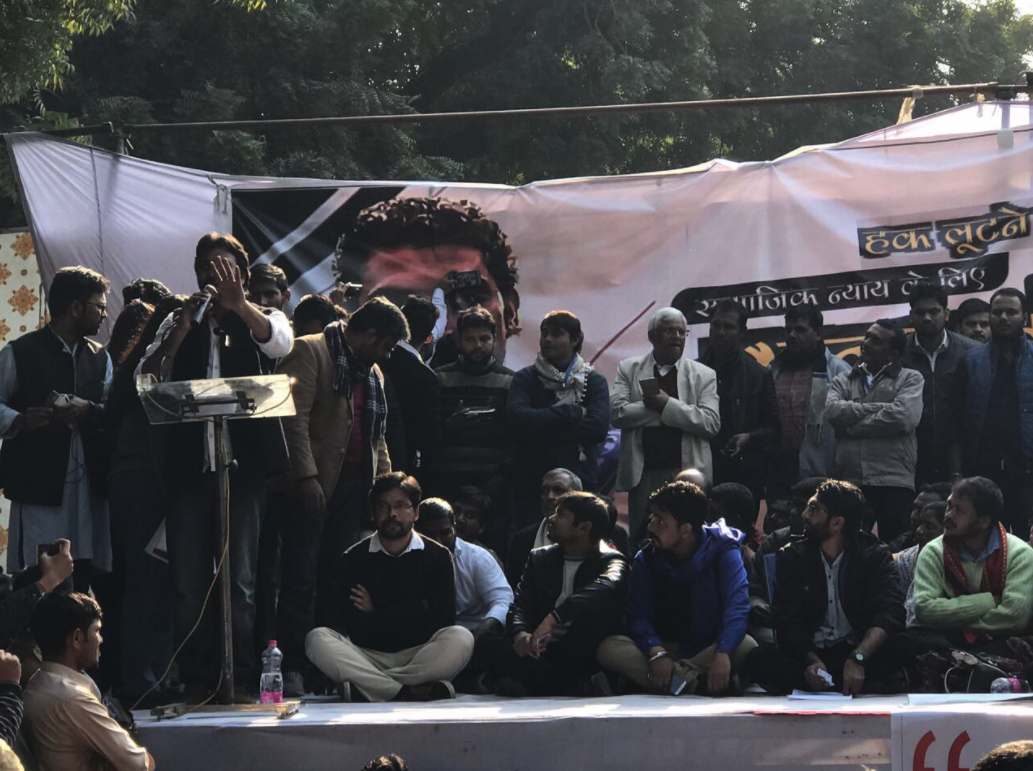 The ‘Yuva Hunkar’ rally was held in New Delhi on Tuesday. Credit: The Wire

New Delhi: All roads leading to the Parliament Street police station in New Delhi were blocked on Tuesday (January 9). Hundreds of police personnel, several barricades and water cannons and numerous units of Rapid Action Force guarded this section of the street. Yet people found their way through the narrow creek-like lanes, left open only for pedestrians, to join the Yuva Hunkar rally – a protest called by several young and independent leaders against what they called the Narendra Modi government’s “anti-people” policies.

Until yesterday afternoon, confusion prevailed among participants over whether the rally was actually happening or not. Several media houses on January 8 ran the story that the the meeting was denied permission by the Delhi police. This came after the deputy commissioner of police New Delhi tweeted about it, tagging various news agencies:

No permission granted so far by Delhi Police to hold proposed protest at Parliament Street in view of NGT orders. Organisers have been constantly advised to go to alternate site which they are reluctant to accept. @PTI_News @ANI @htTweets @TOIIndiaNews @NavbharatTimes @DDNational

With the news spreading quickly, the organisers of the event had a hard time trying to convince people that the rally has not been cancelled. Prashant Bhushan, eminent lawyer and one of the speakers at the event, was quick to point out that the DCP’s tweet was misleading.

Please don’t mislead people @DCPNewDelhi.NGT orders are for Jantar Mantar, not Parliament St. SC has always held right to peaceful protest meetings is a fundamental right. Any attempt by police to stop the #YuvaRally tomorrow will be undemocratic & violation of fundamental rights https://t.co/lMo5LOxK91

While this should have buried all confusions, right-wing supporters on social media, in a concerted attempt, kept circulating the DCP’s tweet. The DCP, on the other hand, did not give any clarification on his tweet, even as a section of the media echoed his view.

However, at the venue, the police let the rally happen in a peaceful way. Since the event was a fully organised affair – pre-erected tents, hundreds of chairs, loudspeakers and a power-generator – it led to many activists alleging that the Delhi police and a section of the media had deliberately spread misinformation about the rally.

Rather than asking us why we are going ahead with the rally “despite not having permission”, media should ask the Delhi Police why they kept lying about cancellation of permission. Thanks to everyone for the terrific turnout amid lies and conspiracy 🙂 #YuvaRally pic.twitter.com/i8l5mO9lMg

Desperate news channels are claiming #YuvaHunkarRally was a flop show, just 100 participants etc. They’re just frustrated their misinformation campaign didn’t work & people are ignoring them! This photo of a packed Parliament Street, tells you the truth. Via @RamaJNUSU pic.twitter.com/rA4feNygiE

Although the rally saw a significant turnout by evening, the organisers blamed the rumour campaign and heavy security at the Delhi border – which they said prevented many from adjoining regions to join the event – for the smaller-than-expected crowd.

Yet, many supporters of Uttar Pradesh-based Dalit group,Bhim Army, members of the United Against Hate campaign, students and teachers from various universities, and members of several civil society groups came forward to participate. 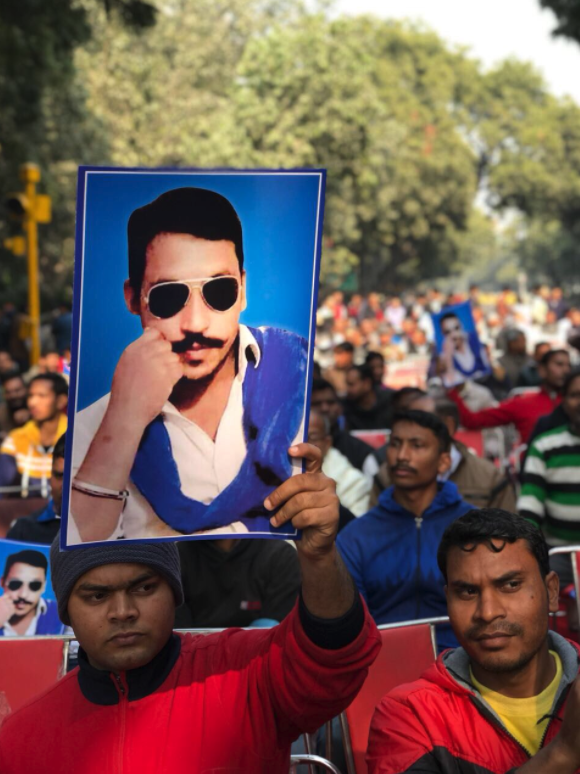 The youth rally is the beginning of a series of such events across north India organised to oppose the Modi government’s perceived failure to generate enough employment and provide affordable education opportunities. Along with this, the events will also try to bring young men and women under one oppositional umbrella against increasing right-wing violence on Muslims and Dalits.

“I believe in a sewing machine. I am here to unite the people who have been left scattered because of 22 years of BJP’s divisive politics in Gujarat. They (Hindutva activists) talk about love jihad. I talk about only love. We will celebrate both April 14 (Ambedkar’s birth anniversary) and February 14 (Valentine’s Day),” shouted Mevani, as his microphone kept malfunctioning.

“In the name of ghar wapsi, cow protection and love jihad, the government is trying to deflect attention from issues of roti, kapda, makaan, shiksha aur chikitsa (bread, cloth, shelter, education and health). A conspiracy to manufacture a fake enemy is going on these days. Let me tell the government – that you keep taking the side of Adanis and Ambanis and we will keep talking about issues of Dalits, Adivasis, minorities and the poor,” he said as he invoked the violence against Dalits at Bhima Koregaon, Una and Saharanpur.

“I want to ask the prime minister: what would he choose between Manusmriti and the Indian constitution?” he said while repeatedly alleging that the government had initiated an unprecedented crackdown on its opposition.

“Why did the police fire on protesting farmers in Madhya Pradesh? Why are students being treated as criminals? Why are leaders like Chandrasekhar Azad ‘Ravan’ of Bhim Army and Assam-based activist Akhil Gogoi facing the National Security Act? Why is there no action against Najeeb Ahmed’s (the JNU student who disappeared 15 months ago) disappearance?” asked the recently-elected MLA from Vadgam, Gujarat, asserting that he will keep raising questions about such issues both in the Gujarat assembly and on the streets.

JNU student leader Kanhaiya Kumar said that the BJP did not want to save India’s democracy but the interests of corporate groups.

“We are not against any particular caste or religious group. We only demand that that democratic and constitutional values should be implemented. Democracy has given us the right to speech and dissent. The BJP does not want Ram rajya as it claims. It only wants to divide the Hindus and Muslims. You must understand that in the fight between Hindus and Muslims, only Nathuram Godse (Mahatma Gandhi’s murderer) will win. They (the Sangh parivar) says that god exists in every human. So didn’t god exist in Afrazul (the migrant worker who was brutally hacked to death in Rajsamand, Rajasthan recently)?” he asked.

“The RSS regards Tulsi Das as a great poet. I oppose his shloka where he said illiterates, Shudras, women and untouchables should always be dismissed. But I also want to ask the RSS: the same poet had also said that Ravan fought on a chariot while Ram took him on with bare feet. What was then (L.K.) Advani ji doing on a chariot?” Kumar said, referring to Advani’s infamous rath yatra during the Ram janmabhoomi movement in the 1990s.

Similarly, JNU student leader Shehla Rashid asked, “Adityanath, who has hundreds of cases against him, withdrew all of them when he became the chief minister. But he has the gall to slap National Security Act on Chandrasekhar who stood for the rights of Dalits.”

“When the young people of India organise a rally, then the police comes to arrest them. They are charged with sedition. But when Shambhulal Regar (who allegedly killed Afrazul) is arrested, Bajrang Dal activists take the court premises hostage, hoist a saffron flag in the court but let alone sedition, the police doesn’t charge them with even minor sections,” she said, while saying that she and other leaders would directly be in contact with the youth without depending on any external agency like the media.

Bhim Army’s president Vinay Ratan Singh said that he wanted to establish the Bhim Army across India and will protest to get Chandrasekhar released. “When Dalits and other marginalised groups show their strength on streets, only then RSS’s divisive politics can be defeated.” Student leader from Bihar Manoj Manzil  said that the education system in India is a mess and the government is doing nothing to address the problems of common students. “The RSS cheated the country during the freedom struggle by discreetly brokering deals with the British.  All they did was to spread hate. It supported crooks like Ram Rahim (of Dera Sacha Sauda), so how can we expect jobs and social justice from this government? I will work in Bihar to unite the youth so that this arrogant government can be defeated.”

Former Allahabad University leader and currently a part of the Samajwadi Party, Richa Singh said, “When Indira Gandhi had declared emergency, then the young people of India ensured that she was defeated. If the Modi and Yogi governments think that they can destroy this movement, then they should understand that the youth will unite and ensure its downfall. Our fight is from Saharanpur to Nagpur. And we will not stop.”

Assam’s farmers’ leader and activist Gogoi spoke out against Hindutva ideology. “Under the Modi government, farmers, youth, Dalits and backward classes are being attacked, but it is only working towards turning India into a Hindu rashtra. Assam is a beautiful state where all communities live together but even there, the BJP is pitting the Hindus against Muslims. It wants Bangladeshi Hindus to come to Assam and drive the Muslims out of the state to strengthen its vote bank.

“Amidst all the attacks on the marginalised people, we have to understand that there is also a sustained attack on the language of rights. We are told that students study on tax payers’ money and spending on education is a wasteful subsidy.

At the same time, when Adanis and Ambanis are given lakhs and crores of tax relief, it is being seen as business incentives. I want to tell the government that the money spent on education is public and not BJP’s,” he said.

“Modi bubble has burst. And the credit should be given to our country’s farmers, youth, women and workers. If someone says that there is no opposition in India, he should come and see the mobilisations in Una, Bhima Koregaon and Delhi. The government has to answer our questions. Whenever we ask questions about employment and education, it takes recourse in polarising the nation on religious lines. We want our rights, not hate,” Khalid said.

“Ab kisi Eklavya ka angootha nahin katega (No Eklavya will cut his thumb now),” he added equating the students of the country to Mahabharata’s Eklavya, who was asked by Guru Dronacharya to cut his thumb to clear the way for the prince Arjun.

The leaders announced that in the next few months, they would constitute teams to organise rallies in Rajasthan, Uttar Pradesh, Chhattisgarh, Madhya Pradesh, Bihar and Haryana.