The Supreme Court order that the status quo be maintained was violated when the administration allowed a trishul-bearing sadhu to enter the Ram shrine. 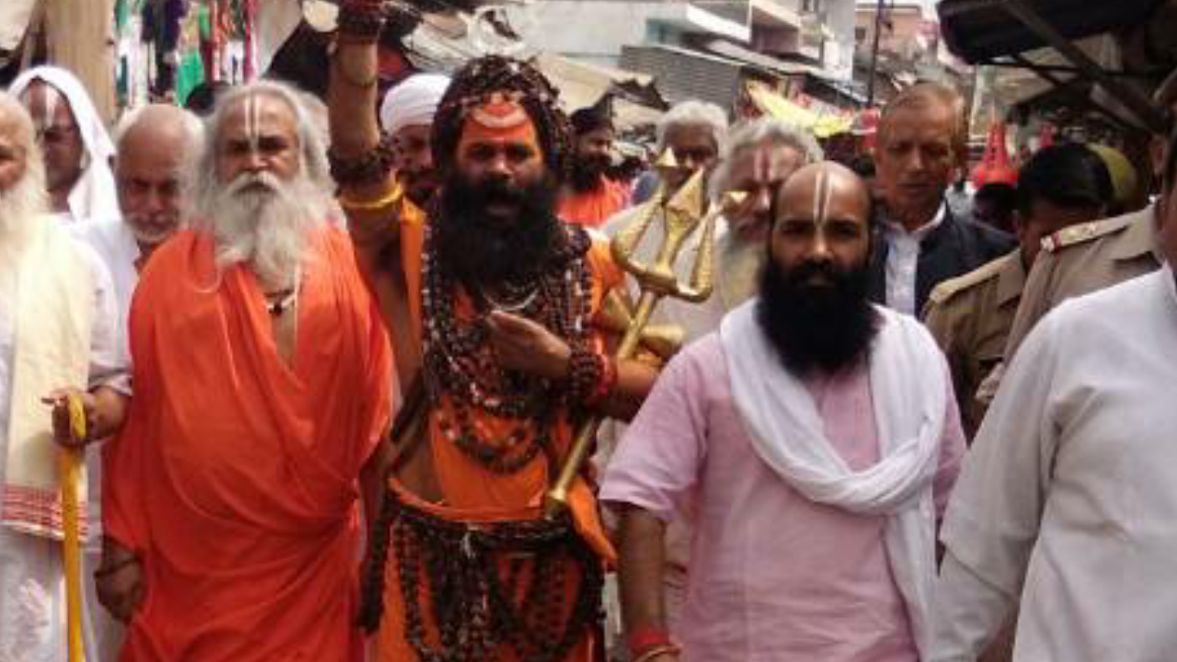 Ayodhya:  In the first indication that Uttar Pradesh chief minister Yogi Adityanath’s support for the speedy construction of a Ram temple at the disputed Babri Masjid site is leading to policy changes on the ground, the district administration has violated a long-standing order of the Supreme Court by allowing a sadhu armed with a trishul, or trident, to enter the makeshift Ram Lalla shrine where the Babri Masjid once stood.

On Saturday afternoon, Vishwa Hindu Parishad leader Ram Vilas Vedanti along with senior Hindu cleric Abhay Chaitanya – who was armed with a trishul – entered the shrine  in violation of the Supreme Court’s 2002 order that the status quo be maintained and that “no religious activity of any kind by anyone either symbolic or actual including bhumipuja or shila puja, shall be permitted or allowed to take place.”

Speaking to The Wire, Anil Kumar, additional district magistrate (law and order) of Faizabad district, said, “Yes, we allowed the sadhu with a trishul to enter the premises because the trishul was his religious symbol and such kind of religious symbols are allowed.”

Kumar’s reasoning was countered by the Muslim petitioners in the case, who say there is no ambiguity in the Supreme Court’s instructions.

The Babri Masjid was demolished on December 6, 1992, by Hindutva activists as part of a criminal conspiracy involving senior Bharatiya Janata Party leaders, the Central Bureau of Investigation has alleged.

“In March 2002 , a Supreme Court bench in the case of Aslam Bhure Vs Union of India banned all types of symbolic religious activities at the disputed site. Now that the Faizabad administration has allowed a person in with his religious symbol – and the symbol is a weapon – the Supreme Court’s order has been violated,” said Khaliq Ahmad Khan, a party from the Muslim side in the Babri Masjid/Ram Janmabhoomi case before the Supreme Court.

“The Supreme Court in its previous order of maintaining status quo at the disputed site had said that the status quo of  January 7, 1992 will be maintained at the disputed shrine, and on that date only one priest was allowed to offer worship to deity, so no further clarifications of religious symbols are needed and what happened at the Babri site is an open violation of Supreme Court’s two order in this sensitive issue”, Khan added.

Reacting to Saturday’s incident, Faizabad divisional commissioner S.P. Mishra said, “That was not a trishul but a small replica of a trishul which the sadhu has been allowed to enter with.”

Close up of the trishul, which the Faizabad divisional commissioner described as a ‘small replica’. Credit: Arshad Afzaal Khan

“By allowing a sadhu armed with a trishul inside the disputed premises, the district administration  has breached existing security norms which are in the knowledge of the Supreme Court,” Haji Mahboob, another party in the case, told The Wire. “Under these norms, even pens, paper, wallets, bags, watches and anything besides the clothes on the devotee’s body are banned. So does the Faizabad administration have an approved list of religious symbols which they have allowed?,” he asked. ” Mahboob said he has spoken to the Faizabad commissioner and district magistrate and registered his objection over the issue.  “We will make a formal complaint to the competent authorities on Sunday.”