How Yogi Adityanath Made it to Where He Is

In a short period of time, Adityanath decimated the political mafia that existed in his area, emerged as a prominent force and polarised the region. 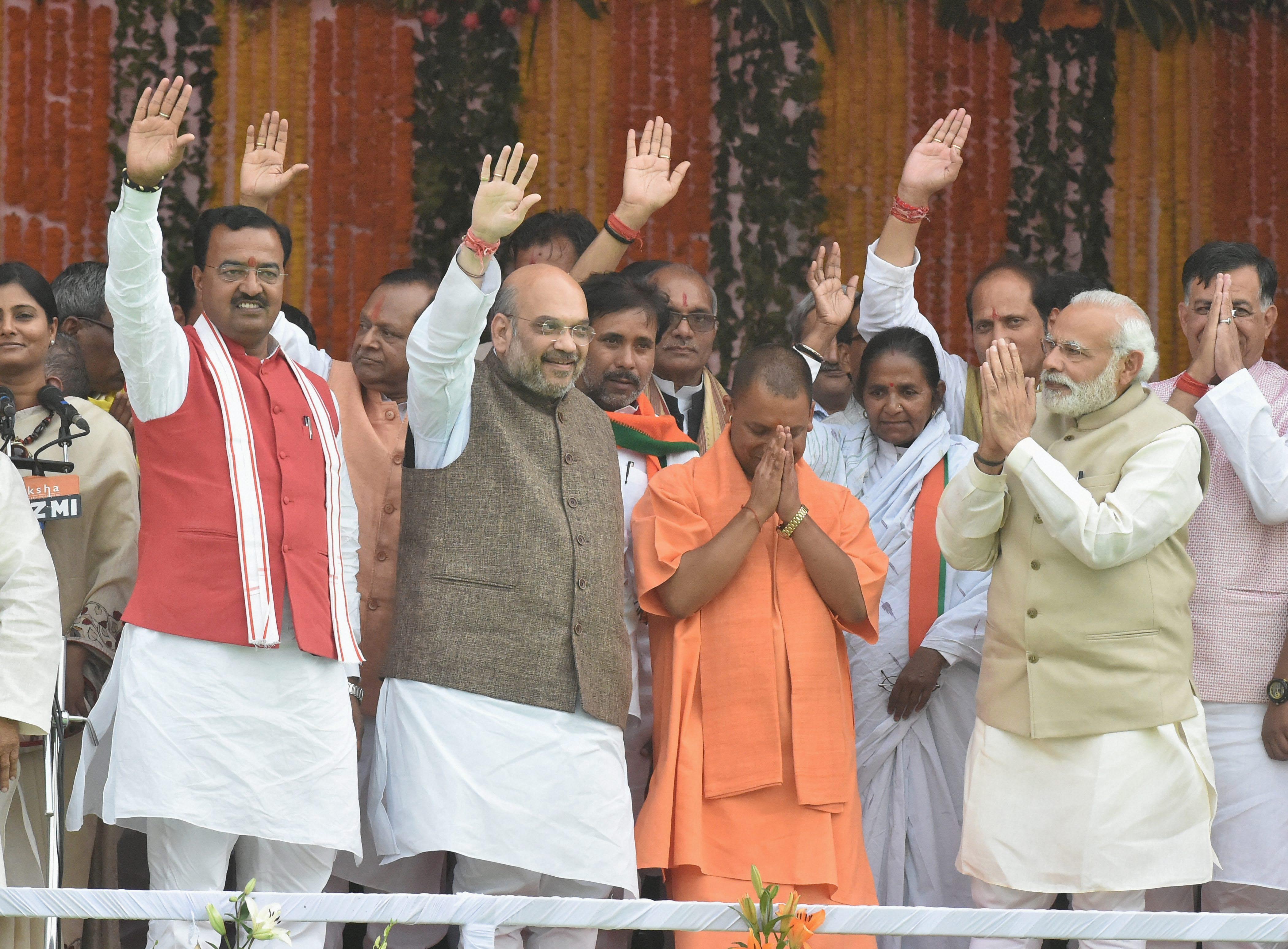 The appointment of Yogi Adityanath as the chief minister of Uttar Pradesh has come as a surprise to political observers. During the UP campaign, Narendra Modi, who was the main campaigner, largely concentrated on the agenda of development or vikas. This was true despite his attempts, halfway through the election, to consolidate the Hindu vote through the use of communal speeches and words. Nor was there any major communal incident or riot, as happened prior to the 2014 national elections. It is now clear that even if the BJP attempts to bring in development in UP as promised, the path to winning the 2019 elections will be through communal polarisation.

Adityanath is a familiar face in national politics due to his communal remarks from time to time, the latest being prior to the voting in western UP in an attempt to gain the Hindu and particularly the OBC vote in the face of Jat opposition. Born Ajay Singh (June 5, 1972), a Rajput from Uttarakhand, he holds a university degree and has been the MP from the Gorakhpur Lok Sabha constituency five times since 1998, including most recently in 2014. He was appointed mahant on September 14, 2014, after the death of his guru, Mahant Avaidyanath. The Gorakhnath Math has been involved in political matters for decades, but Adityanath has made Poorvanchal his Hindutva laboratory since the late 1990s.

What may not be as well known is the manner in which the yogi rose to prominence in the late 1990s, gradually replacing the earlier ‘upper’-caste mafia of the 1980s such as Harishankar Tiwari (a Brahmin) and Virendra Pratap Shahi (a Rajput) who dominated the politics of the region. This mafia had control over government tenders, vast patronage and connections with political parties, but no communal linkages. The decline of this mafia provided space to the yogi, leading to a shift from caste-centric mafiadom to religious criminalisation. This was possible as Adityanath had two advantages: he was a Rajput during a period when ‘upper’-caste dominance was being challenged and he has successfully forged an alliance with the ‘lower’ castes – the OBCs and Dalits – to maintain his dominance. Hence, in 1998, 26-year-old Adityanath was fielded as the BJP candidate from Gorakhpur as Advaityanath was not keeping well. The yogi not only won the election, but he was able quite rapidly, through even use of force, to decimate the earlier mafia, emerge as a dominant force and communalise the politics of the region.

Another aspect that is perhaps not well known is that the yogi has a large number of FIRs against him for causing communal tension, violence and even attempt to murder. He was implicated in the Gorakhpur riots of 2007 but no action was taken by the Samajwadi Party government. In March 2011, the documentary film Saffron War – Radicalization of Hinduism accused Adityanath of promoting communal disharmony through a ‘Virat Hindustan’ rally in rural UP. Ministers in many state governments in UP have in the past had criminal cases against them, but this is perhaps the first time a chief minister has such a criminal record.

There is much speculation that despite some murmurs in the party, the RSS ‘persuaded’ Modi and Amit Shah, who were keen to appoint a leader with a developmental image, to accept Adityanath as the chief minister. There are a number of reasons why the BJP-RSS has selected him to head the state. First, the 2000s have witnessed the attempt by the BJP to create a strong “non-Brahmin Hindutva”, not only in UP but in many states in the country. While in the 1980s and early 1990s the BJP was viewed as largely an ‘upper’-caste Hindu party, since at least the mid-1990s in UP there has been an attempt to consciously mobilise and bring into the ambit of the party non-Yadav OBCs and non-Jatav Dalits, who constitute the large majority, in order to meet the challenge posed by the SP and the Bahujan Samaj Party.

It was believed that a combination of ‘upper’ castes who have traditionally supported the BJP and these two lower caste groups would create an unbeatable electoral combination, which the SP and the BSP, who have a limited social base, would not be able to match. This, it seems, is what has happened in the 2017 assembly elections in large parts of UP. Adityanath, with his Hindu Yuva Vahini (HYV), contributed greatly to this mobilisation as the Gorakhnath peeth is an ancient, non-Brahmin institution and its mahants have been Thakurs. The yogi has been able to create a subaltern Hindutva which is pro ‘lower’ caste and at the same time anti ‘upper’ caste and anti Muslim.

A second reason is that Adityanath has propagated a form of grassroots communalism which has struck a chord in eastern UP, giving him a Robin Hood image. Today, he holds janta durbars to resolve people’s problems and is viewed as the protector of the ‘middle’ and ‘lower’ castes, including the business community. Even Muslims make requests at his durbar, which points to his complete control, particularly in north Poorvanchal in the stretch from Gorakhpur to Bahraich, though in recent years he has extended his sway over the entire eastern region. The goal of the BJP-RSS is not only to win elections but to make India more Hindu. The idea is not to have large riots, but slowly to make Hindutva acceptable in the eyes of the common man and render the Muslim as the ‘other’, in which the yogi has been very successful through long-term mobilisation, patronage and work among the people. The RSS has found him very successful in this venture and making him chief minister sends a message to the people and the party workers about the goals of the BJP.

A third reason is that the yogi has had a love-hate relationship with the BJP leadership, as he has established himself as an independent power centre with a distinct form of Hindutva through which he has gained dominance over the region and increasingly party workers, many of whom also come from the subaltern castes. His communal statements and demands for his HYV followers during the election campaign created problems for the BJP leadership. By making him the chief minister, the BJP and RSS hope to ‘contain and control’ the yogi, yet use him to consolidate its hold over the rising, upwardly mobile, non-Brahmin elite which is visible today in UP and within the party. The yogi is useful to the party at this political juncture and there has perhaps been a negotiated settlement that he will follow the path laid out by the leadership; it remains to be seen whether he will keep to this understanding.

Finally, the party leadership has attempted to make the yogi, a popular figure, the chief minister and simultaneously show that the agenda of development is not lost by designating two deputy chief ministers. The party leaders have pointed out that Adityanath himself asked for two deputies who would carry out the day-to-day work of administration and development. By choosing Adityanath (a Thakur), Keshav Prasad Maurya (an OBC) and Dinesh Sharma (a Brahmin), the party leadership has tried to balance the aspirations of different castes. By appointing a Muslim minister in the UP cabinet, the party has claimed that it does not discriminate. While Maurya has little administrative experience, Sharma, as the former Lucknow mayor, is expected to fill the gap. BJP leaders have argued that the yogi is a disciplined person who will not tolerate corruption and control the police and bureaucracy. Moreover, it is expected that the government will be tightly controlled by the prime minister’s office and senior bureaucrats in Delhi. The BJP under Modi has not shown much respect for federalism or state autonomy. Adityanath also, in his first interaction with the media, held that he will follow Modi’s “sabka saath, sabka vikas” agenda and work towards development and “good governance”.

Clearly a new era has begun under a saffron chief minister heading a key state like UP in the Indian Union. Modi and Shah have made a big gamble over the next two years prior to the 2019 elections, to combine their twin agenda of development and Hindu consolidation. The former has to be followed as they have promised the UP electorate rapid economic change. Yet they are aware that they could not have won in 2014 and 2017 without communal polarisation; for them the Muslim vote and well-being does not seem to count. The victory of the BJP in the 2017 assembly elections has put India on the path of a majoritarian democracy, in which a strong and developed Hindu nation is to be created.

Sudha Pai is a National Fellow of the Indian Council of Social Sciences and Sajjan Kumar is a Phd scholar at Jawaharlal Nehru University.