As the country remains preoccupied with the Uttar Pradesh elections, on women's day, we look at some of the voices that didn't find political expression in the campaign. 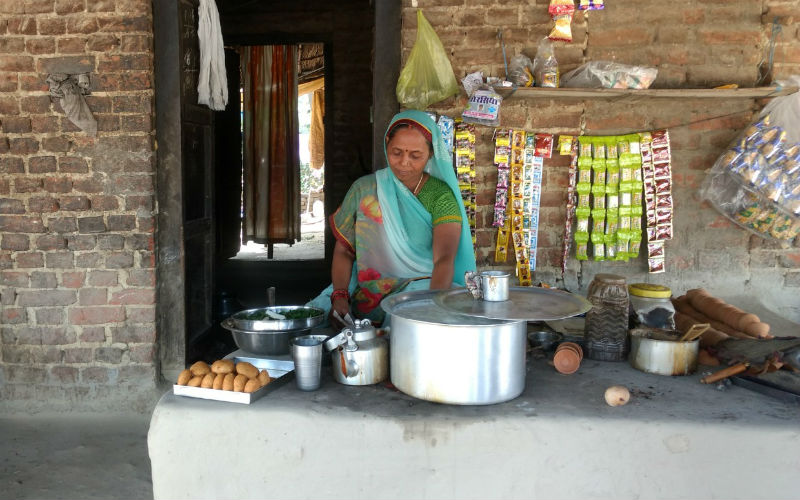 A woman at a tea stall in Phephna. Credit: Titash Sen

Varanasi: Samsa Khatoon, a resident of Mau, has been working the loom since she was eight years old. The wife of a bunkar (weaver), she has eight children herself now, all involved in the production of sarees.

One of her daughter’s, Zeenat Jahan, teaches at a nearby college. “I wake up at 6 am everyday and work with the sarees till 8:30. Then I go to college and come back by afternoon, after which I get back to the loom again.”

The textile industry in Mau is still overwhelmingly a cottage enterprise with production confined largely to the domestic space. Women and children contribute labour to the entire process ­– and it is a long one with multiple stages. From spinning thread to weaving the cloth, cutting designs and colouring the cloth, working with dye and cutting the threads to finish the saree – women and children are involved in pretty much the entire process from a young age in Mau.

Gulshan Jahan, one of the younger girls who still goes to school, helps with the colouring. “It’s heavy work, and I often get burnt,” she says.

To cut designs for a full nine metre saree, the expected pay is a maximum of Rs 10 per person. And to finish a full saree, the pay ranges between Rs 5 to Rs 10 per saree. In case the saree is in anyway damaged, however, the middlemen who procure the sarees from the weaving families deduct Rs 50, says Rabia Khatoon who spends her days engaged in this work.

None of these women are paid directly for their labour. The income is considered familial and is controlled by the men. The total amount that the family can expect for one saree, the women say, ranges between Rs 50 to Rs 100. 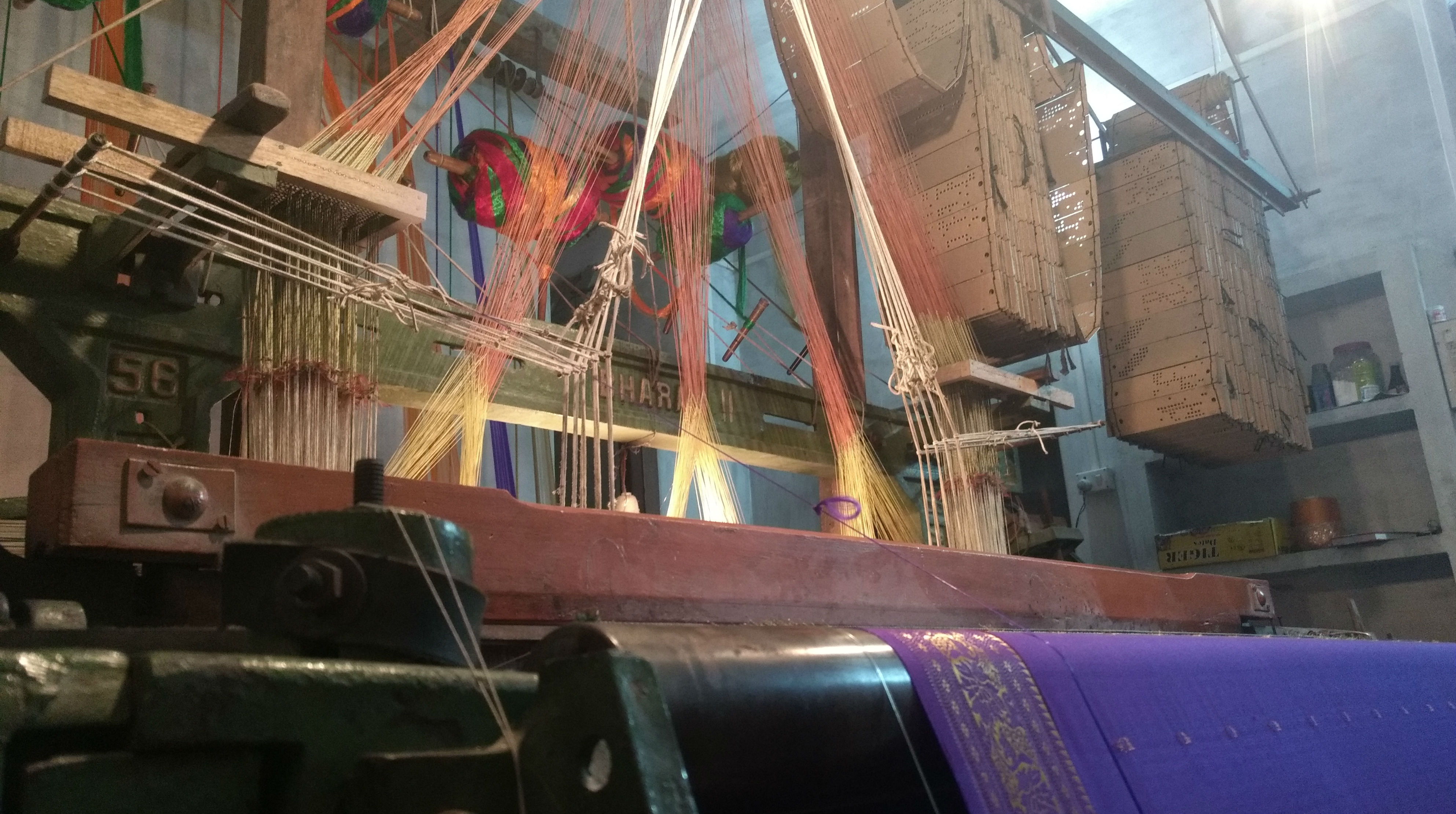 A power loom in a bunkar household in Mau. Credit: Titash Sen

Electricity is pivotal to the entire process – especially powering the looms. The entire production process comes to a standstill when there is no electricity, which often makes meeting orders difficult.

Rabia Khatoon says that the Akhilesh Yadav-led Samajwadi government has ensured a constant supply of electricity for at least half-a-year prior to the assembly polls. The SP government had also introduced a subsidy on electricity for weavers that gave some relief for the community. Among the women of the weaving families of Mau that The Wire spoke to, there is a consensus in support of the Samajwadi Party. “Haan, cycle toh Muslim logon ka dekhta hai. (Yes, the Samajwadi party looks after Muslims),” Zeenat Jahan says. In Muslim dominated Mau, the women seem to understand the importance of voting. However, the vote is in favour of Akhilesh Yadav and not the local candidate, Altaf Ansari, whom the SP has pitched in Mau. 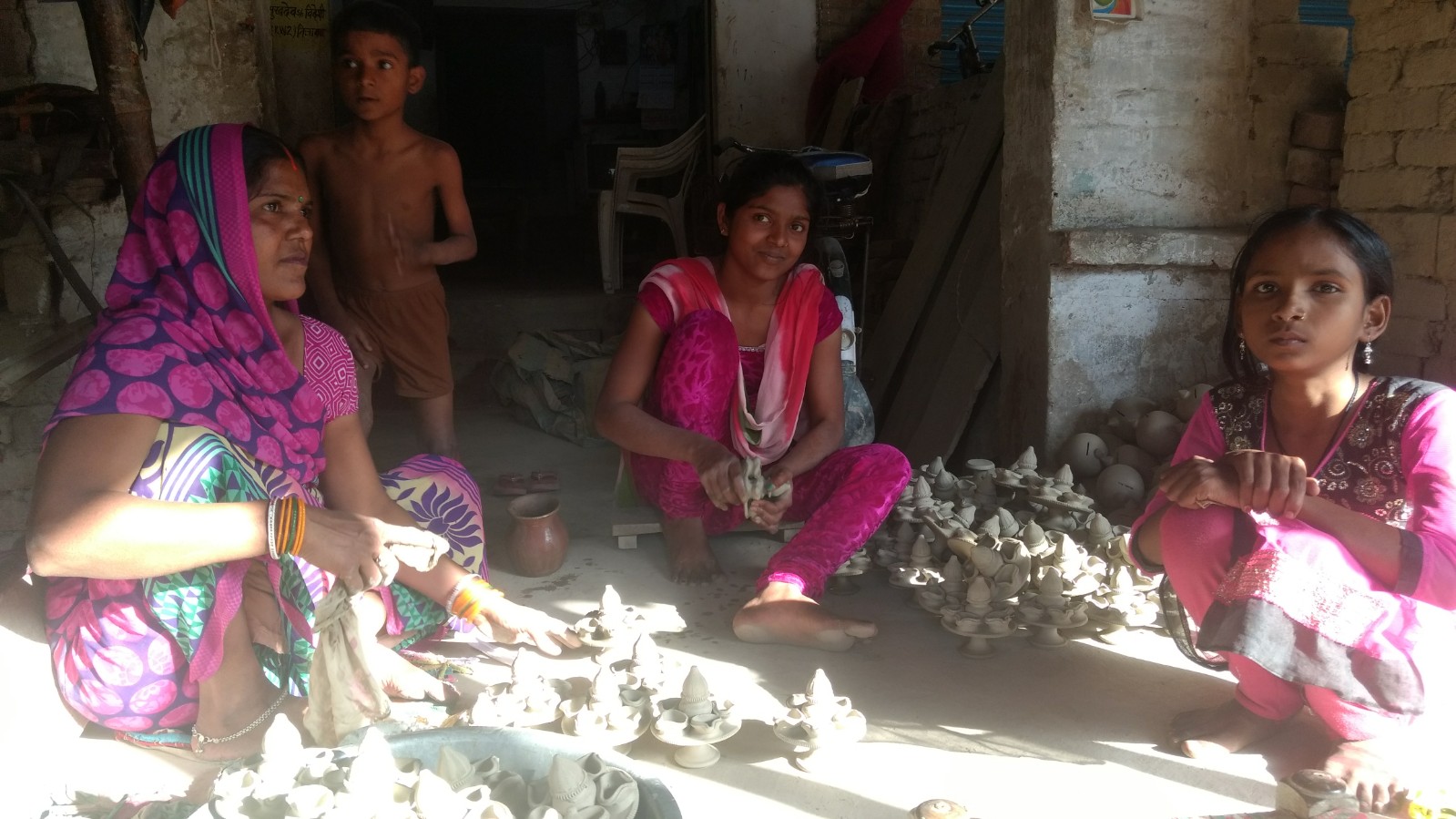 A similar economic precariousness can be seen in the potter community of Nizamabad  in Azamgarh district. The area is famous for black-clay pottery, with artisans receiving state and national awards. The pottery is produced by the Prajapati community who are non-Yadav OBCs. Like the weavers, production is undertaken by the entire family with women actively contributing to the several laborious stages of production. The Prajapati community in Nizamabad is one of the most marginalised communities, living in ghettoes in the town. Prema Devi, who sits by the road making intricate diyas, or lamps, with her daughter all day says that she can make upto Rs 11 per diya. The community, and especially the women, were severely affected by demonetisation as orders for their products declined. Despite that, she says she will vote for the BJP – like her community. When asked if she knew that the BJP was the party which had taken the notebandi decision, she said she didn’t know. Smiling, she said, “Mujhe toh yeh sab samajh mein nahi aata (I don’t understand these things.)”

Sumitra Devi, another woman from the Prajapati community is the bahu of a somewhat well-to-do household and does not participate in making pottery. Her family can afford to hire labourers and therefore, she is completely restricted to the domestic space. She doesn’t know how much the labourers are paid and she doesn’t think she is equipped to vote.

Shakuntala Prajapati, a clay idol maker complains that she has to work till 2 am often. It is back-breaking work, and she manages the sculpting and the painting. She is largely insulated from the more public aspects of the trade, with her husband managing the orders and finances. She has a daughter who dropped out of school and helps her with the idols. Sumeri Devi belongs to a family that makes black-clay pottery. Her husband works on the wheel and she polishes and dries the products with the help of her children. Her children don’t have access to education because they are engaged in the trade. She herself could not answer any questions about how the business works, saying, “Hum toh bas yehi karte; unko malum hai. (I only do the work, my husband knows about how it works.)” When asked if she will cast her vote for the assembly polls, she said, “Nahi malum (I don’t know).” 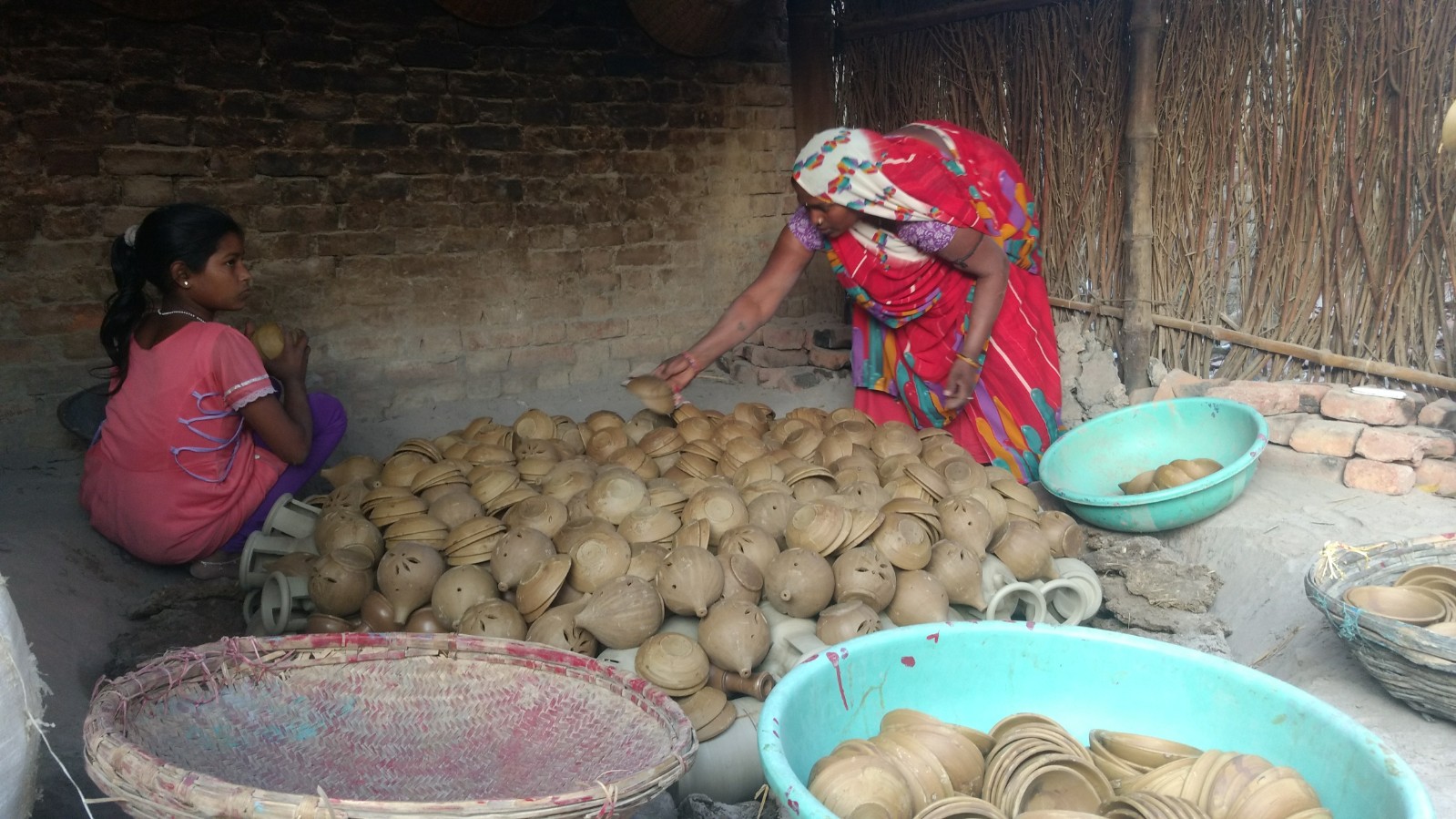 A number of other women that The Wire spoke to in the Prajapati community said they would either vote for the party that they will be told is most likely to win, or will vote as their family or community will vote. However, both in Mau and in Nizamabad, the women have a common grievance that remains unheard – too much work, too little pay.

At Prime Minister Narendra Modi’s rally in Deoria, Usha Devi, a bania woman came bearing lots of papers and an infant, her grandchild. Devi had been abandoned by her husband and left without a livelihood. But she has five children and grandchildren to support. Her sons work as agricultural labourers and her household depends on their meagre income. She has been fighting a case in court for eight years after her water supply was cut off. Very confidently she asserts that she will vote for the BJP and has come to the rally to seek redressal from the prime minister himself. In the previous election, she says she voted for Akhilesh Yadav, but having written to Yadav twice with her grievances and having received no reply, she has now decided to pin her hopes on Modi.

However, she was one of the few women at the rally. Women have had a pitiful presence in BJP rallies which seem to be characterised by an aggressive machismo. As for the SP, Dimple Yadav’s rallies have managed to draw out women in reasonable numbers but not those of other leaders. Only the BSP seems to have succeeded in mobilising women with their rallies having a significant female presence. It would not be wrong to assume that Uttar Pradesh’s silent voters include a large number of women. The BSP’s ability to draw women might turn the silent vote in their favour.

With caste dynamics being an important determinant of voting behaviour in Uttar Pradesh, the question of women and their politicisation is summarily forgotten. Their concerns as a community are rarely taken up and schemes aimed at women barely scratch the surface of the innumerable problems they face. Evidently, the lack of access to education perpetuates marginalisation among these women even though they are an equal part of the production process. Without efforts towards education and awareness, they cannot adequately articulate their issues and thereby, cannot take part in elections in a  meaningful way. Echoing the political preferences of their husbands, families or communities makes them passive participants in the electoral process and effectively keeps them out of the political space. 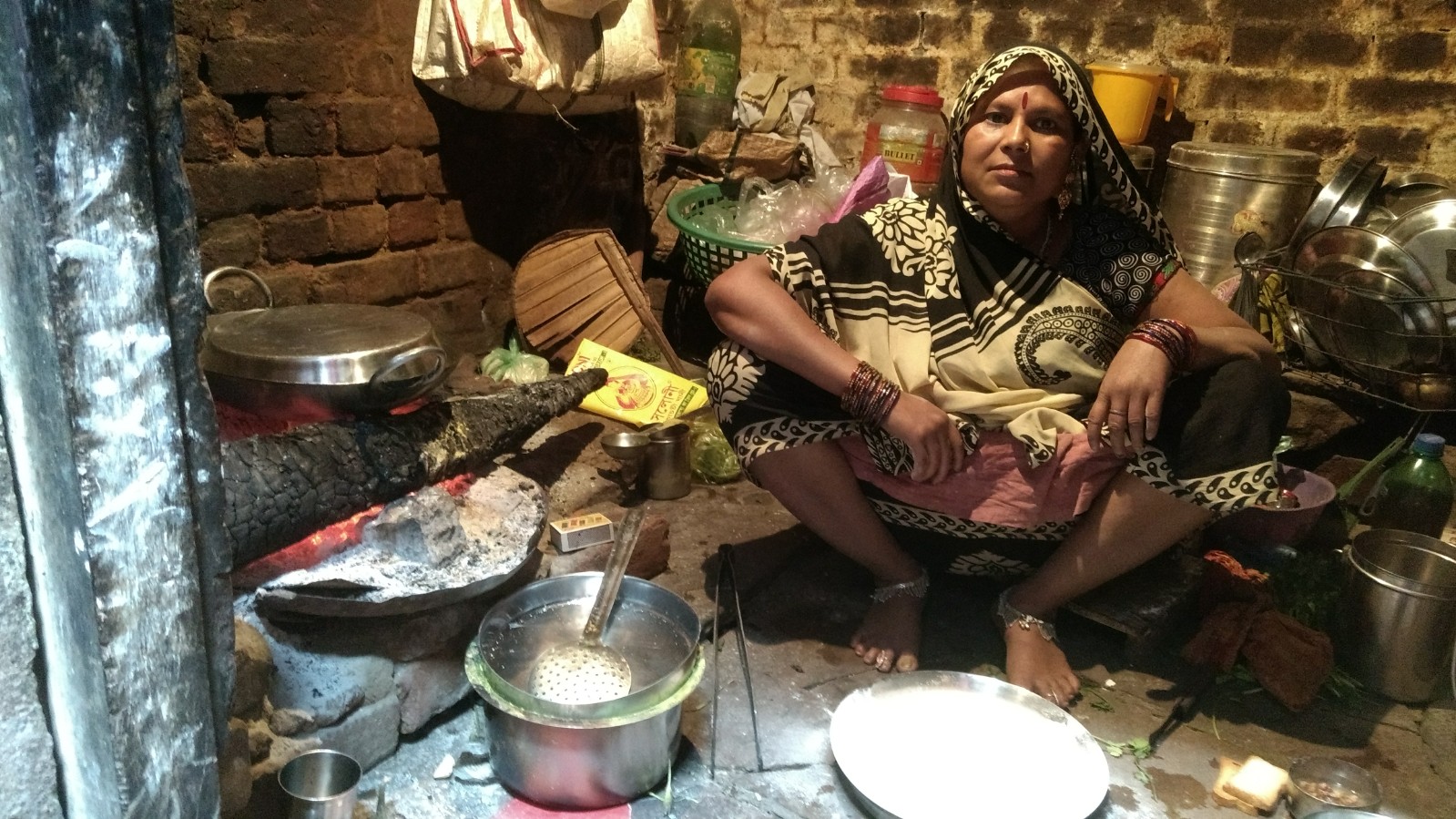 Sandhika Devi cooking on a wood fire in her kitchen in the Dom basti, Varanasi. Credit: Titash Sen

Women are few and far between in public spaces and in the rare instances that women are visible, they are most likely to be upper caste women.

At several tea stalls all over Poorvanchal, political charcha is restricted to groups of men. If there are any women at all, they are absolutely silent and peripheral. At one such stall in a small village, Phephna, the wife of the tea-stall owner said she will vote whereever her family votes. Another woman, sitting by the road said she will vote for BJP because “bohot shor-sharaba kartein hai (they make a lot of noise).” A Brahmin woman, she said her entire village is likely to vote for BJP. In the rare instances that women are visible and vocal, they are most likely to be upper caste women.

On the other hand, in a Dom (corpse-burner) basti in Varanasi, the women belonging to the Dalit community don’t step out of their houses at all. Pushpa Kuchri, an aged woman says she has no money of her own and depends on her son for money. They are entirely dependent on men – even to get wood from the burning ghat that they cook with. They have no access to gas, sanitation and education and do not have any means by which they can voice their concerns. The entire community faces political neglect despite being located bang-in-the-middle of Varanasi, Prime Minister Modi’s constituency. Sandhika Devi, a resident of the basti, says that the lack of cooking gas forces her to use wood from the ghat, the smoke from which affects her eyes. The women in the basti reiterate that they will caste their votes based on how their community votes.

With the UP election coming to a close, the spotlight has settled glaringly on the dynamics between political parties. The national media all but relocated to Varanasi and has been preoccupied with trying to predict trends. With the hype surrounding UP, political parties themselves have focused on the caste dynamic and have designed their campaigns accordingly.

As per Census 2011 data, Uttar Pradesh has a female population of 47.7%, which is nearly half the population. With voter turn-out at roughly 57% in Uttar Pradesh thus far, the share of female voters can be estimated at around 25% to 30%.

Considering this significant vote-share, the failure to capitalise on women’s issues and bring them into the political fold seems incongruous. Unlike Nitish Kumar in Bihar, politicians in Uttar Pradesh failed to appeal to women as a political category across caste lines and enlist their support as a vote-base. While each manifesto – SP, BSP and BJP – all have sections for the empowerment of women, these manifestos clearly reflect a shallow understanding of women’s concerns and show that no real effort has been made to understand the complex spectrum of issues that women from different castes, communities and occupations face. In the process, women’s aspirations for social mobility remain suppressed and patriarchal structures ensure that their voices don’t get political expression.