With BJP Facing the Heat in UP, Modi and Crew Pull Out Anti-Muslim Playbook

A significant section of non-Yadav OBCs and non-Jatav Dalits who have been loyal voters of the BJP since 2014 are deserting ship in central and eastern UP. 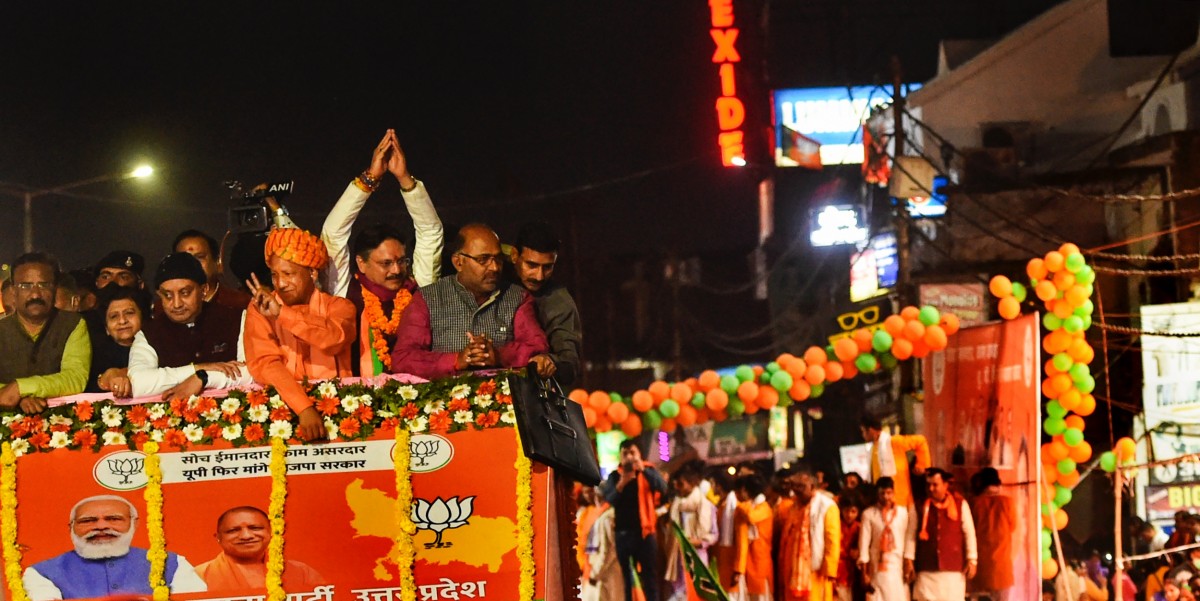 Kanpur/Lucknow/Hardoi: The Bharatiya Janata Party is raising its communal pitch in Uttar Pradesh, but will it work?

Three of the seven phases of the state assembly polls are already over. The high-decibel anti-Muslim campaign unleashed by the saffron party is a repeat of the 2017 assembly polls, when halfway through the polls, Prime Minister Narendra Modi had constructed the ‘kabristan-shamshaan‘ political binary – much on the lines of Adityanath’s “80 versus 20” analogy.

Not surprisingly, Modi in his latest speech at a UP rally attacked the Samajwadi Party (SP) – BJP’s primary rival in the UP polls – for “shielding terrorists” to safeguard its “vote bank”. This was another not-so-veiled attempt to club terrorists and Islam. Speaking in the context of a court sentencing 38 people to death and 11 others to life imprisonment in the 2008 Ahmedabad serial blasts case, the prime minister also wondered why many of the bombs were planted in cycles. “Have you seen the poll symbol of the SP?” he said, referring to the Akhilesh Yadav-led party’s symbol, a cycle.

One may think that this connection is too overstretched to have any impact, but Modi’s speech was soon backed by the BJP machinery with a blatantly Islamophobic campaign. The most striking example of this was the party’s Gujarat unit posting from its official social media handles a cartoon of a group of Muslims being hanged. The cartoon’s caption read: “No pardon to those who spread terrorism.” Platforms took down the post for spreading hate.

To any independent observer, the cocktail of Islamophobia and hyper-nationalism is a tired strategy that is put to use by the BJP as a last measure to consolidate its core supporters and swing undecided Hindu voters. To its credit, the strategy has worked in favour of the saffron party on multiple occasions in a Hindu-majority country.

However, the political ground in UP is very different this time around. The seats that went to polls in the first three phases, primarily in the western regions of the state, were heavily influenced by the farmers’ movement against the Union government. The electorate’s focus on agrarian issues was so intense in these phases that the BJP could not polarise the elections along religious lines.

The opposition spurred the discontent by drawing further attention towards livelihood issues like joblessness, price rise of essential commodities and a rapidly sliding education and health infrastructure in light of the state government’s apparent mishandling of the pandemic.

The next two phases will be crucial for the BJP. These comprise seats in central UP which have traditionally been BJP strongholds, and the SP does not have a strong caste-based ally in the region. These regions are also those where concentration of Yadavs and Muslims – both considered core voters for the SP – is relatively lower than other parts of the state.

If the BJP is to make up for its probable losses in the first three phases, it will have to almost sweep this belt. To that end, the BJP has tactically invoked its anti-Muslim plank in a vehement way.

However, there are other reasons too for the BJP’s recent accelerated polarisation.

Firstly, across the regions of rural Lucknow, Hardoi, Rae Bareli, Lakhimpur Kheri, Sitapur and other districts which will vote in the next two phases, the BJP is in a much weaker position than it was in 2017.

The opposition’s livelihood-based narratives have stuck in rural areas, with almost every voter in villages talking about the Adityanath government’s lack of long-term initiatives in development-related areas. This is even true for those who said they will vote for the BJP despite these concerns. One implication of this transformed political ground is that the BJP is on the back foot, attempting to win over a majority of Hindu voters by promising doles and extending apologies for problems like stray cattle. Different degrees of unpopularity have also forced the BJP to depend heavily on split in opposition votes – a greater split in anti-BJP votes will eventually improve the saffron party’s chances. 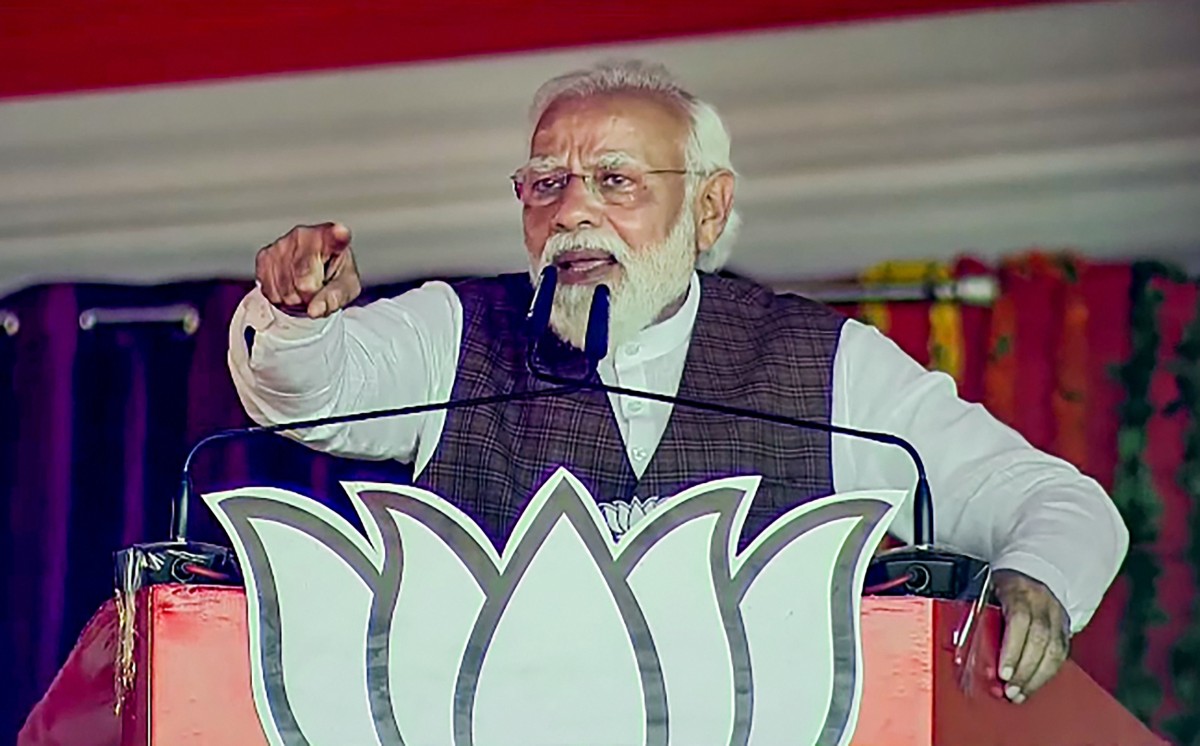 Secondly, staring at the saffron party is a significant swell of anti-BJP sentiment among those communities in central UP which have been voting for it in the last few elections. Among the most prominent caste groups which have shown a political shift towards the SP are Pasis (Dalits) and Mauryas (OBC), both hugely influential in a majority of seats which are going to polls in the fourth and fifth phases.

Against such a backdrop, contests in multiple constituencies The Wire visited may push the BJP to the third spot.

Take the instance of Sandila, a constituency in Hardoi district. Here, SP ally Suheldev Bharatiya Samaj Party has fielded Sunil Arkvanshi, a small OBC group in the state but influential in this pocket. Since Arkvanshis have been strong BJP supporters, the saffron party – which used to nominate an “upper” caste candidate from the seat – was forced to field a newbie, Alka Arkvanshi, fearing that the OBC group may shift its vote. This has irked the “upper” caste groups who feel shortchanged by the BJP. Some of the influencers among them switched sides and officially supported the Bahujan Samaj Party’s Muslim candidate Abdul Mannan, an influential leader and former MLA.

Mannan now enjoys the support of Dalits, Muslims and upper caste groups, while the SP, The Wire could gather in its visits, has a large section of Mauryas, Yadavs and a section of Arkvanshis, who make a sizeable number together. Observers say that the contest in Sandila has genuinely become triangular, but one that may see the BJP sinking to the third place.

Thirdly, the last-minute exodus of heavyweight OBC leaders like Swami Prasad Maurya and the likes from the BJP strengthened the SP’s expanse among different caste groups, and at the same time compelled the saffron party to repeat most of its MLAs. Much of the disenchantment against the Adityanath government among Hindu groups is directed more towards their local MLAs than the chief minister himself.

Given this understanding, BJP sources until a few months ago kept telling the media that the party was going to drop at least 150 legislators. In its eventual list, the figure was less than 50.

A BJP minister in the state told this correspondent recently that the saffron party is comfortably placed to win. “We have given free housing to over 40 lakh eligible people, turning them all into BJP votes. Imagine the party’s gains if you consider family members of those beneficiaries,” he said, adding that he wasn’t even counting crores of “laabarthis (beneficiaries)” who received free ration in the last two years.

He also expected that almost 29% new voters who have been added to the electoral rolls are most likely to favour the BJP.

Also read: BJP Believes Last 5 Phases of UP Polls Will Bring a Victory. Here’s Why That Won’t Be Easy.

On the face of it, the logic is sound. However, given how the campaign has turned out and with laabarthis looking clearly divided, the BJP is facing more challenges than it had expected. The BJP’s campaign slogan until recently was “Abki baar phir se 300 paar (We will cross 300 seats again)”. But you don’t hear that anymore. Amid growing unpopularity, BJP members currently running an apologetic whisper campaign resting on the assumption “Aayegi toh BJP hi (Only the BJP can come to power)”.

“Swarth ke upar agar janata dekh payegi, agar desh ko prathamikta degi, toh BJP phir se zaroor aayegi (If people can rise above their selfishness, prioritise the interests of the country first, then the BJP will come back to power for sure),” a BJP district-level worker in Hardoi told The Wire, in what was a rare admission of the stiff battle ahead for the party.

As the ground beneath the BJP’s feet is shaking, the attempt to polarise the polls along Hindu-Muslim lines also appears to be a desperate effort to overcome the real challenges the party is facing. Communalisation of polls has been a constant strategy for the Hindu nationalist party across India, but the influence of Hindutva appears to have reached some degree of saturation in UP, especially among the poor. Ground reports also indicate that urban voters, considered to be influenced by the BJP, are voting in much smaller numbers than their rural counterparts.

By invoking the 2008 Ahmedabad serial blasts, the BJP machinery has yet again attempted to turn the electoral battle into a contest between Hindutva and livelihood issues. Whether this works in its favour or not depends hugely on how the opposition sustains its momentum.