There is one basic question no one is asking – where does the money come from? 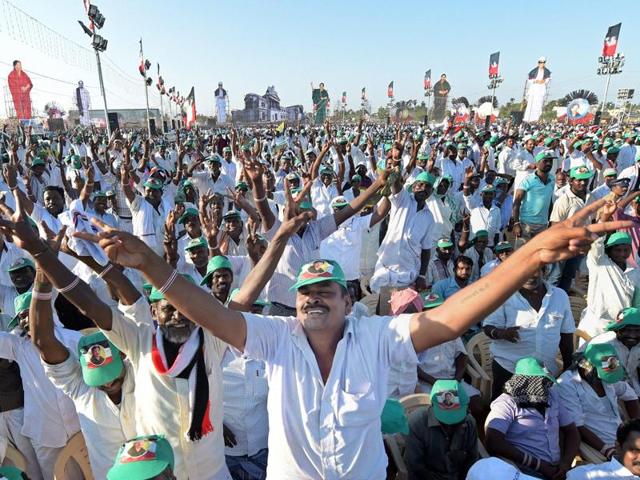 In an unprecedented move, the Election Commission (EC) cancelled the by-poll to the R.K. Nagar assembly constituency in Tamil Nadu. In a late night announcement on April 9, the EC, in its 29-page statement, said, “the by-poll which was scheduled to be held on April 12 stands cancelled.”

The EC’s decision came on the back of evidence of large-scale bribing of voters by the ruling AIADMK (Amma) faction led by V.K. Sasikala, among other parties and candidates. The EC specifically named state health minister C. Vijaya Baskar in its report. “The income tax (IT) department authorities have also informed that several complaints were received recently indicating that Vijaya Baskar is the main person involved in bribing the voters in the R.K. Nagar assembly constituency which was to go to the polls on 12th April, 2017. Some loose sheets were with his accountant Srinivasan indicating distribution among the voters”.

“Cash of Rs 5 crore was seized from the associates of Vijaya Baskar and from his native place. Incriminating documents in the form of overall money distribution charts to several leading political executives and functionaries totaling 89 crore rupees were found from the premises of Vijaya Baskar’s Chennai residence,” the EC report said.

Cash-for-votes is a novel scheme prevailing throughout Tamil Nadu since 2003. In that year, at a by-poll held in Sathankulam in Tirunelveli district, money was openly distributed to the voters by the ruling AIADMK. The methods were changed when two assembly constituencies – Kancheepuram and Gummidipoondi – went to the by-polls in February 2005. In these two constituencies, nose rings were given to women.

This practice, however, got strengthened and methods were further improvised during the 2006-2011 DMK period. There were 11 by-polls held in that period and the ruling DMK and its alliance partner Congress won all the 11 seats. The famous ‘Thirumangalam formula’ was introduced by the ruling DMK. Each voter was given Rs 2,000-Rs 5,000 in that election. Then chief minister M. Karunanidhi’s elder son M.K. Alagiri was allegedly the kingpin behind this move.

The trend continued and was further strengthened when Jayalalithaa came back to power in 2011. From 2011 till 2016, the AIADMK won all seven by-polls by adopting the ‘Thirumangalam formula’. The issue became a menace and the EC at several points of time openly admitted that ‘cash for votes’ is an extremely difficult problem for it.

“Cash-for-votes is a serious problem for us. We quelled the armed challenges mounted by terrorists and mafia groups in the rest of India. But here in Tamil Nadu, it’s a peculiar problem and we are going to deploy the entire might of the EC to quell this process in the coming April/May 2011 assembly elections,” said former chief election commissioner S.M. Qureshi at an event in Chennai in January 2011.

But what is extraordinary is the techniques that were used by the major political parties – AIADMK and DMK. “The money distribution has become an art here in Tamil Nadu. The political parties were not distributing rampantly, [they were doing so] systematically. I can go [so far] as to say that these politicians were using scientific methods to distribute money. Say for example there were 40 houses in a street. First they will identify the rabid opposition party votes and just remove them from their list. Then their solid votes and those who were sitting on a fence and still not deciding whom to vote. It was this section [that was] their main prey. Generally, the distribution will be over in just 20-30 minutes,” said a former senior police officer, who did not want to be named. “These parties are improvising their strategy in each election and as a retired bureaucrat I am surprised by their new novel methods,” he added.

The bribing has certainly induced some sections – mostly middle and upper middle class – to vote a certain way. “I was surprised when a group of 12 women – middle-aged and from middle class families – met me in my office when I was contesting for an assembly constituency in south Tamil Nadu. The team leader of that delegation said, ‘Sir, that X party promised to pay Rs 500 for one vote and what are you going to give. We have 24 families and total 54 votes in our colony.’ I was flabbergasted and became speechless. I am not saying politicians are saints, but this statement from a group of middle-class women made me speechless,” said Peter Alphonse, a former MP and a senior leader of Tamil Nadu Congress.

In all discussion over cash-for-votes, one basic question no one is asking is – where does the money come from? A former CEC echoed this sentiment. “You [the system] allow the generation of black money throughout the year and expect that the EC should curtail it in just 15 days time when the election process was in force? Do you think that the EC has got some magic tricks to suck out the entire black money which was flowing like a river whenever elections were held?” asked former chief election commissioner N. Gopalaswami.

It is not just one party that engages in this system. In Tamil Nadu, the AIADMK and DMK are both invovled. “One senior leader of the DMK used the services of nearly 300 employees of a public sector undertaking to distribute money in his constituency when he contested in the 2016 assembly polls. He was not ready to trust his own party cadres in money distribution, because there were quiet a number of complaints against few of the DMK cadres – who were given the task of distributing money to the voters – that they were swallowing the same.”

But this time around, the EC has actually taken some enormous steps to ensure that money was not given. “There were 200 central observers for this election. This is unparalleled in the history of EC since independence. Besides, there were hundreds of CRPF commandos,” said Gopalaswami. Yet, none of this helped the EC curb the process of buying votes, and it finally had to cancel the poll just 48 hours before the voting began.

Meanwhile, the IT department had questioned Baskar for several hours at the department’s headquarters in Chennai. The questioning is expected to continue for few more days. Reports in a section of national media suggest that at least 12 state ministers are in the IT department’s radar and they may be called for interrogation at any time.

Surprisingly, the AIADMK did not raise its voice in parliament against the IT raids. With Sasikala lodged in a Bangalore jail and the deputy general secretary and R.K. Nagar candidate T.T.V. Dinakaran himself facing several FERA cases and his supporters, including sitting ministers, being grilled by the IT department, Tamil Nadu’s ruling party appears to be weakening.