To neutralise hostility against it, the BJP machinery has pushed aside its slogan of vikas and is focussing on polarisation tactics. But will this be enough? 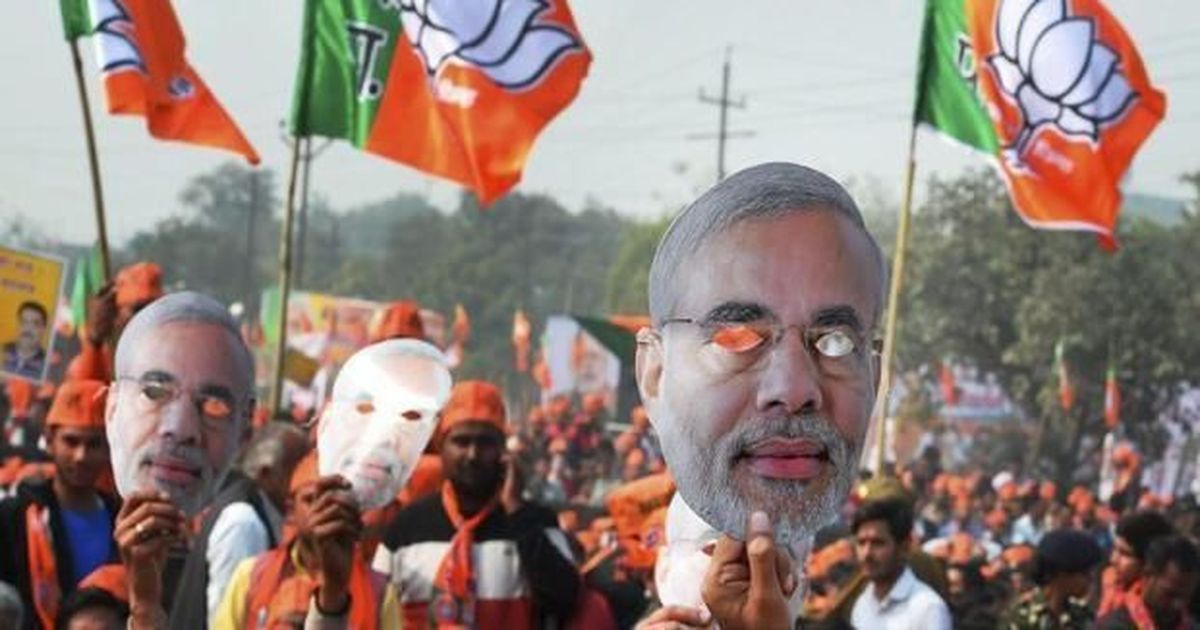 Ahmedabad: What sets the upcoming Gujarat assembly polls apart from those we have seen since May 2014 is that, barring Goa, it is the only election where the Bharatiya Janata Party is fighting to retain power. The call for parivartan (change) is not its slogan. This appears a little unusual as in the past few years, the party rode on this mantra to gain back-to-back victories in Haryana, Maharashtra, Assam, Bihar, Uttar Pradesh and Manipur.

In Gujarat, however, the BJP has to defeat perceptible anti-incumbency on the ground to regain power, which means that the ostensible tenor of its campaign has hinged hugely on its other popular slogan of vikas (development). But even ‘vikas’ can have only a limited impact since the saffron party has practically ruled Gujarat since 1995 and is clearly struggling to offer a new vision in the state.

On the other hand, the Congress’s campaign in this largely bi-polar contest resembles the BJP’s in states where it was in the opposition. Its slogans like Congress aave chhe (Congress is coming to power) or social media campaigns like ‘development has gone crazy’ reflect the call for change, which has come to be associated with only the BJP.

In short, the BJP represents the political establishment in Gujarat whereas the Congress, which has been out of power for 22 years, although rendered organisationally weak, signifies the party which is most well-placed to challenge that establishment, which, for many, is now being seen as steeped in arrogance.

The overarching sentiment among a large section of people in rural Gujarat is anger and a large part of this is channeled towards the the BJP’s leaders and members who are being seen as the only beneficiaries of Gujarat’s development over the past decade or so. “Public resources were auctioned out but the profits from it were not distributed to the common people. The BJP leaders do not even meet us, forget addressing our concerns. Such is their ahankaar (haughtiness),” Jagdish Bhai, a groundnut farmer in Amreli, told The Wire. As the polls come closer, a large number of people in rural Gujarat echo the charge of the BJP being high-handed towards the common people.

Also read: BJP Will Do Well to Be Wary of the Hardik Effect in Gujarat

In such a context, the BJP is relying on multiple strategies to woo the voters. A multi-faceted approach that aims to consolidate the Hindus is at the the crux of the Hindu nationalist party’s campaign, indicating that the party is well aware of the hostility against it.

Hindu consolidation: A mix of communalism, vikas, and rumour-mongering

If someone had to make a teaser, the BJP’s campaign would look like  a vikas versus caste politics debate. Most BJP leaders, including Prime Minister Narendra Modi and party president Amit Shah, have tried to portray their party as the only one which can take forward the state as far as development parameters are concerned. On the other hand, it has tried to corner the Congress by saying that the grand old party is tactically using caste faultlines to garner votes. The BJP’s appeal to voters, therefore, is a simple one – to reject the Congress which, according to saffron leaders, is trying to divide society.

This campaign is specifically designed to stop Patidars from deserting the BJP as many observers expect them to do. If Patidars move away from the party, the BJP would lose its most loyal caste group – the most important part of its core voter base comprising Patidars, Jains, Banias, and Brahmins – over the last three decades.

The other plank that the BJP has used is to launch a systematic attack on the triumvirate of Hardik Patel, Jignesh Mevani and Alpesh Thakor. The three young men shot into the limelight after leading community-based struggles against the BJP government in the last two years. While Thakor has formally joined the Congress, Hardik has declared his support for the Congress and Mevani has been asking Dalit gatherings to vote against the BJP. 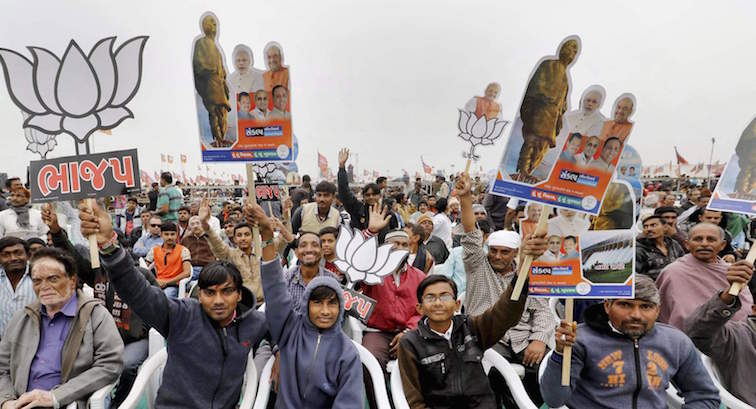 Of the three, Hardik is being targeted the most by the BJP. A large section of Thakors and Dalits have historically sided with the Congress, but Patidars, a community that Hardik has come to represent, are seen by the BJP as the new defectors. Sangh parivar activists can be openly heard on the ground defaming Hardik as a morally degenerate politician or as a “Congress agent”. The party hopes that by doing this, it may be able to stem the brooding antagonism of Patidars against the BJP.

With this, the Hindu nationalist party has advanced the larger idea that ‘Congress Raj’ would bring back Muslims in positions of power. BJP leaders, in many of their speeches, have openly equated the possibility of a Congress government in Gujarat with Muslim rule. Modi likening the Congress scion Rahul Gandhi to Mughal authoritarian ruler Aurangzeb and Congress rule as “Aurangzeb Raj” as an indirect reference to the prominence Muslims may gain in a non-BJP government is a case in point. Similarly, in many assembly segments where Muslims form a substantial population, Modi has tried to charge the Hindus on religious lines, his speech in Bhuj being one of such instances. Adityanath and Anurag Thakur have also used their election rallies to polarise the electorate on religious lines.

Political observers say that though the BJP has tried to beat anti-incumbency through various localised issue-based campaigns to build confidence, multiple causes on ground – especially the hostile Patidars’ sentiment  –have managed to diffuse their impact. Thus, in the last phases of campaign, it has focused solely on stoking anti-Muslim sentiment.

“Let us say the BJP’s confidence-building measures did not quite take off. Ahead of the election, therefore, it has been forced to resort to its age-old tactic, that of polarising the electorate on religious lines,” an Ahmedabad-based senior political scientist who asked not to be named, told The Wire.

Although the party leadership does not acknowledge this, the BJP’s campaign on the ground reflects this understanding. Use of slogans like RAM, an abbreviation for (Vijay) Rupani, Amit (Shah) and (Narendra) Modi, versus HAJ, short form for Hardik, Alpesh and Jignesh, the circulation of communal videos and whipping up insecurities among Hindus against Muslims has been rampant.

“The Muslims are waiting to take revenge against the Hindus for the 2002 Gujarat riots. In the Congress government, they are hoping they would have a chance to get back at us. If the Congress comes to power, the Muslims will be back to their hooligan ways. Our (Hindu) women will not be safe,” Hiten Pandya, a Rajkot-based BJP activist told The Wire. The refrain is quite common across urban centres of Gujarat.

The BJP’s campaign reflects the fact that Hindu consolidation is its primary agenda and that vikas has been relegated to the background.

To supplement this, Modi, the party’s chief campaigner, has equated each criticism against him as an insult to Gujarat and Gujarati pride. A close confidant of Gujarat’s chief minister Vijay Rupani told The Wire on November 26, a day before Modi kicked off his last leg of canvassing, that the party was hoping to swing the hostile sentiment through Modi’s speeches in which he would emphasise on his ‘Gujarati identity’.

“That is Modi’s USP. Unlike Rahul Gandhi, Modi is a son of (Gujarat’s) soil. And this will have an emotional appeal and we hope this may turn the tide against us,” he said.

While the BJP is aware that it may lose a significant section of the Patidar vote, it is relying on other caste groups like Koli Patels, Darbars and a section of Dalits, along with their traditional support base, to boost their prospect. “Hardik is a Kadava Patel. We are going to Leuva Patels to seek their support. They have historical rivalries. Their places of worship are also different,” said the BJP leader who is also an old Rashtriya Swayamsevak Sangh (RSS) hand, while elaborating on a number of such caste contradictions among other hostile groups.

A mix of these tactics, according to him, will be backed by the party’s strong organisational machinery, which would work to strengthen booth-level support. “We attach great significance to booth-level management. Our president Amit Shah is overseeing this aspect directly,” he said.

Curiously, Shah, unlike all other assembly elections, has been largely absent in the party’s public campaign. A possible reason for his invisibility may be that the dominant Patidars think of him as solely responsible for the lathi-charge and police firing on their rally in August 2015. “Anandiben (the then chief minister) could not have ordered firing. She is from our community. Amit Shah was calling the shots,” Himanshu Patel, a Patidar in Junagarh, said, adding that the reason for their anger against the BJP was primarily this.

Many other Patidar community members echoed this sentiment.

Despite this large-scale effort to build confidence among Hindu voters, micro-management of booths remains the party’s single point plan to come back to power. However, it may be easier said than done.

“I will vote for the BJP again. But I would not campaign for it this time on the day of election. I do not want to be at the crossroad with other members of my community. It was the Patidars who used to man the booths but not this time,” said Narayan Bhai Patel, a farmer in north Gujarat’s Siddhpur.

While Congress is much weaker organisationally, the BJP workers on ground also did not appear enthusiastic if one compares the party’s recent campaigns in other states. Modi is a familiar politician in the state, and the novelty with which he was seen in a state like Uttar Pradesh may be absent in Gujarat. This may not portend well for the BJP which is banking heavily on the prime minister’s appeal.

No other state-level leader, including Rupani, deputy chief minister Nitin Patel or state president Jitu Vaghani, enjoys the popularity and stature that Modi had. “I will vote for Modi in 2019 but he will not be here to run the state” was a constant remark that a large section of Hindus made.

Adding insult to injury is a gradual shift among urban youth who are seeking change. In universities across Gujarat, many first-time voters said that the state will benefit only if there is a change in government every five years. “A democracy will function better that way,” said Kanika of Maharaja Sayajirao University in Varodara, adding that she and her friends want to see how a non-BJP government performs in the state.

While Patidars drive the anger against the government, it is an overarching sense of exhaustion with the BJP that is writ large in rural Gujarat. Whether this fatigue translates into votes against the formidable BJP – and whether a majority of people accept the Congress with no state-wide popular leader to boast of as a credible-enough alternative – remains to be seen.