Will Not Contest Assembly Elections While J&K Remains a Union Territory: Omar Abdullah

The National Conference leader underlined his hope that the Supreme Court will overturn the decision to revoke J&K's special status. 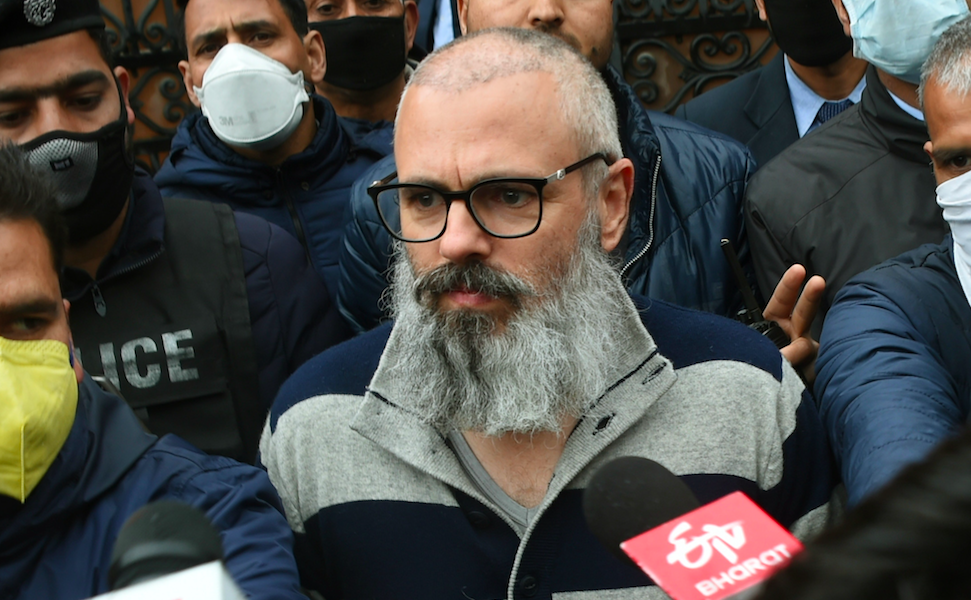 New Delhi: A day after the National Conference (NC) patriarch Farooq Abdullah said his party is “looking up to the Supreme Court” to restore the special status of Jammu and Kashmir, his son and former chief minister of J&K Omar Abdullah has categorically stated that he will not contest any election as long as the region remains a Union Territory (UT).

“As for me, I am very clear that while J&K remains a Union Territory I will not be contesting any Assembly elections. Having been a member of the most empowered Assembly in the land and that, too, as the leader of that Assembly for six years, I simply cannot and will not be a member of a House that has been disempowered the way ours has,” the junior Abdullah, who is the present NC president, wrote in an op-ed in Monday’s edition of the Indian Express.

Just recently, the BJP’s national general secretary Ram Madhav, visiting Kashmir, said that the assembly ‒ kept in suspension since last December ‒ would become functional after the elections are held, based on the new delimitation of constituencies under the Jammu and Kashmir Reorganisation Act, 2019.  Akin to what Union home minister Amit Shah had said earlier, Madhav too stated that the UT of J&K would be granted “full statehood” soon. The BJP has urged the Election Commission of India to hold the polls this year itself.

In the op-ed, Omar questions many of the reasons cited by the ruling BJP and its leaders for the revocation of Jammu and Kashmir’s special status and relegating it to the status of a UT. He said that while Ladakh ‒ which was part of the erstwhile J&K state ‒ was made a separate UT, supposedly on the “public demand” of the area’s Buddhist population, the region also consists of Muslim-majority Kargil and Leh, which are “vehemently opposed to the idea of being separated from J&K”.

Omar was released after 234 days in detention under the Public Safety Act, on past March 24. He was put under house arrest on the intervening night of August 4-5, along with all top leaders of the state hours before the Narendra Modi government decided to table in parliament its decision to dilute Article 370 and Article 35A of the constitution and slice out two UTs from the existing state of J&K. A day later, Omar was moved to a state guest house.

The state’s former chief minister and leader of People’s Democratic Party (PDP), Mehbooba Mufti, along with various other state politicians from the two major state-based parties, have been kept either in detention or under house arrest since August 4-5 last year.

In his article, Omar said that the special status of J&K “was not a favour done to the state” and that “it formed the basis of the state’s accession to India”.

“The nominated representative of the Union government usurped powers, that should have been vested with the legislature and a popularly elected government, to rewrite J&K’s constitutional relationship with the rest of India. The Parliament of India spent less than a day each in the Lok Sabha and the Rajya Sabha to change more than 70 years of history, to undo the sovereign commitments made to the people of J&K and to dismember the state.”

Like his father, he too has underlined his hope on the Supreme Court’s five-judge bench set up to decide on the matter.

“We, in the J&K National Conference, do not agree with what has been done to J&K nor do we accept what has been done. We shall oppose this, our opposition will continue in the highest court in the land in the form of the legal challenge filed in the Supreme Court last year. We have always believed in democracy and peaceful opposition. Sadly these very democratic rights were trampled on a year ago.”

Omar also pointed out that in the days leading up to the revocation of Article 370, Satya Pal Malik, then governor of the state, had repeatedly told the people of J&K that there were no measures being taken by the Centre to abolish its special status.

“The people were treated to categorical denials by the occupant of the highest office in the state, the Governor, that J&K’s special status faced no threat. He debunked the rumours, explained away the additional forces suggesting they were required for Assembly elections later in the year. So what does one conclude from this? That the occupant of such a high office deliberately lied to the people or that he wasn’t kept informed? I know what I believe but you can draw your own conclusions.”

Satya Pal Malik was the governor of Jammu and Kashmir when the state’s special status was revoked. Photo: PTI

Importantly, the former junior minister in the Atal Bihari Vajpayee government also highlighted that even the prime minister kept the matter a secret from a delegation of his party leaders.

“Some of us, senior office-bearers of the J&K National Conference, had a meeting with the PM just days before the August 5 developments. It’s not a meeting I will forget in a hurry. One day I may write about it but propriety precludes me from saying more than that we left the meeting with a completely different impression about what was going to unfold in the next 72 hours.”

Underlining that his party has always believed in democracy and peaceful opposition, Omar said the NC has over the years “lost thousands of workers and office-bearers to militant violence because of our choice to remain a mainstream political party while opposing the separatist politics that grew in the late 1980s”.

He added that “the orchestrated campaign” against mainstream political parties in the country’s national media, “particularly at the hands of the ruling dispensation”, has left his party wondering “whether the sacrifices were worth it”.

While the mainstream political parties in the Valley have faced criticism about their alleged ‘silence’ on the dilution of Article 370, Omar said that since most of the senior NC leaders have been kept in detention at their homes, the party “is yet to meet to decide its next political course of action”.