Named by the police in the exam and recruitment scam, the senior BJP minister believes the CBI will confirm her suspicion that evidence was tampered to implicate her and save Shivraj Singh Chouhan 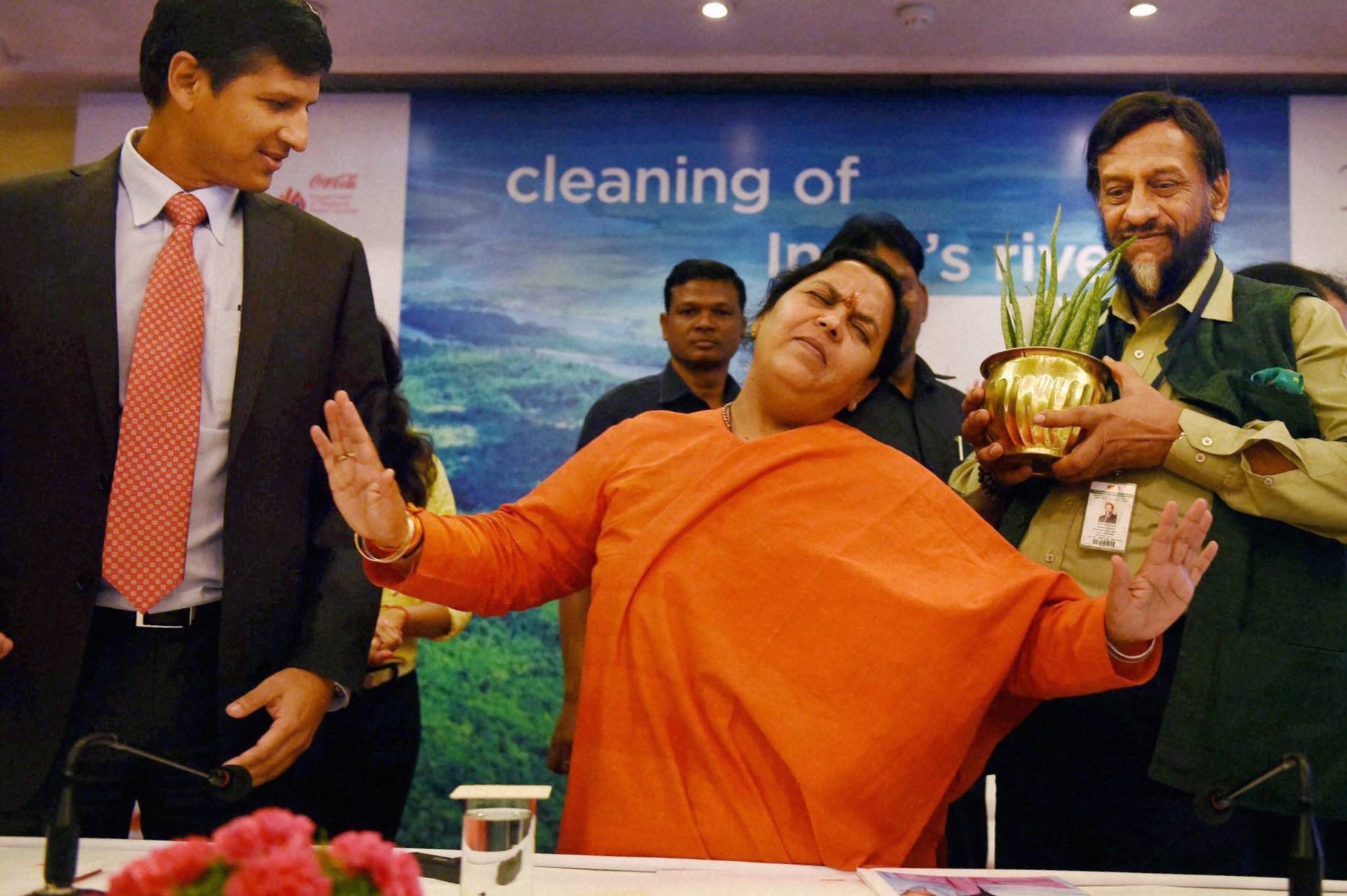 In her eyes, Chouhan is the man because of whom she lost her position as chief minister of Madhya Pradesh a decade ago, a personal catastrophe that prompted her to walk out of the party and remain in the political wilderness for six long years. And he has continued to be the reason that she has been kept away from the affairs of the state by the party top brass despite her return to the BJP fold in 2011. That is why Bharti – who was the only BJP leader to have endorsed the Congress demand for a CBI probe into the Vyapam scandal barely four months after it was exposed in July 2013  – considers the court’s order  especially sweet music to her ears.

Bharti’s grouse goes back to November 26, 2005 when she was upstaged by Chouhan who was elected as leader of the BJP legislature party, following which Bharti left the party in a huff. Until her return to the BJP fold in 2011, Bharti often called the chief minister bachcha chor, or kidnapper, her way of referring to the manner in which Chouhan ‘hijacked’ the reins of power that she had wrested single-handedly from the two-time Congress chief minister Digvijay Singh in the 2003 assembly election. In fact, Bharti believes that even after her return to the party in 2011, her continued ‘externment’ from Madhya Pradesh has been due to the influence Chouhan has vis-a-vis the BJP high command.

Her recent attack on the chief minister suggests that she has found an appropriate weapon to strike back at her bête noire who is vulnerable like never before on account of the Vyapam scam. Her likely weapon of choice is a pen drive that is said to contain proof of Chouhan having saved his skin by implicating Bharti instead .

The pen drive contains  a copy of the “original excel sheet” that  whistleblower Prashant Pandey  had retrieved  from the computer hard disk of the Madhya Pradesh Professional Examination Board/Vyavasayik Pareeksha Mandal (Vyapam) chief system analyst Nitin Mahindra soon after the cash-for-job scandal had surfaced in July 2013.

Pandey, a cyber expert from Indore, was hired by the special task force (STF) appointed to probe the scam to crack the Board’s computer data. Later he supplied a photocopy of the retrieved excel sheet to Congress leader Digvijaya Singh who, in turn, submitted it to the special investigation team (SIT) that was monitoring the STF force investigation on the order of the Madhya Pradesh High Court.

Interestingly, the Congress leader that Bharti worked so hard to defeat in the 2003 state assembly elections is the one who has helped create the circumstances for her to get back at Chouhan. The Congress held that the Crime Branch, Indore, which cracked the first Vyapam case on July 7, 2013, tampered with the original excel sheet which contained the chief minister’s name in over 40 places as a recommender for candidates in various recruitment tests. Further, that the sheet was doctored to substitute the CM’s name with that of Uma Bharti and ‘Raj Bhawan’. Subsequently, SIT chairman, Justice Chandresh Bhushan, dismissed the proof provided by Digvijaya Singh as a forgery, which was endorsed by the Madhya Pradesh High Court as well, prompting Chouhan to use this clean chit as the biggest proof of his innocence against detractors who said he feared a CBI probe because it would expose him as complicit in the scam.

In the past few weeks, as outrage over the trail of as many as 46 unexplained deaths related to Vyapam hit the national agenda due to comprehensive media coverage, Bharti broke her silence on Vyapam. In doing so she seemed to be on the same page as whistleblower Prashant Pandey and Digvijaya Singh.

The Union Water Resources Minister too held that “when the Indore Crime Branch was sharing information with the STF regarding the probe, discrepancies took place’. She was alluding to the allegedly doctored excel sheet that substituted the chief minister’s name with hers some 23 times. Her claim is an implicit endorsement of the evidence Digvijaya Singh provided, which was rejected by the SIT.  Even before the Supreme Court ordered a CBi probe, Bharti had urged Chouhan to have those discrepancies probed to ensure that people were not falsely implicated. Now she has every reason to be hopeful that the CBI would do what she had expected from the chief minister.

Sadhvi and her priest

The present tun in the Vyapam case is entirely due to the efforts of whistleblowers like Prashant Pandey who is confident that the CBI, with its professional competence and cyber expertise would be able to detect the tampering of the excel sheet that originally is said to have contained Chouhan’s name. He believes the CBI is competent to retrieve data that may have been destroyed by the Indore Crime Branch. Pandey’s statement that the CBI should be able to nail “the chief minister’s lie” is exactly what Bharti was looking forward to when she told the media earlier this week that she has feared for her life and that of her supporters ever since the Vyapam scam surfaced.

What has provoked the fiery politician was the appearance of her name in the local media as a recommender for 17 candidates in a test for contractual teachers. Her joining hands with the opposition on the issue rattled the chief minister on whose insistence the then director general of police, Nandan Dubey rushed to her residence to say that her name was not among the accused but merely as a reference.

While Bharti was not pacified, she chose to keep mum on the subject. If anything, her seething, pent-up anger ensured that the STF buried the case mentioning her name in the maze of other cases. SIT chief justice Chandresh Bhushan wanted an FIR registered against the Union minister but the STF sleuths resisted the pressure on the grounds that she had not taken any money from the candidates; moreover that there was no evidence or witness to prove the charges. Later, Uma Bharti’s family priest Liladhar Pachori was made a witness by the STF in a case related to bungling in a test for contractual teachers. Pachori was allegedly recommended for the post of a contractual teacher and his name was found on the excel sheet recovered from the computer of Nitin Mahindra. However, while the STF let Bharti off the hook and instead concluded that Pachori was recommended by OP Shukla, who was OSD to former technical education minister Laxmikant Sharma (both Shukla and Sharma are in jail), the Congress continues to state that Pachori, who used to stay in the servant’s quarters of Bharti’s B-6 Shyamla Hills residence, was recommended by Bharti.

Bharti has accused the STF of adopting double standards in the Vyapam case. Her argument is that if the STF sought to make her an accused just because her family priest was suspected as a beneficiary in a contractual teachers’ test, then the chief minister too should have been made an accused because his personal assistant Prem Chand Prasad was charge-sheeted in the scam. Prasad is accused of having secured admission for his daughter in a medical college through dubious means.

In an interview to India Today magazine last week, Bharti said that Prem Chand Prasad’s association with Chouhan was far closer than Pachori’s with her. “I find it difficult to digest that the police have named me as an accused while not taking any action against the chief minister,” she said.

As for the embattled CM, he has always been evasive on questions regarding Bharti’s outbursts. After all, he has endured her taunts in the past as well. “I have never reacted to her comments, even when she was not in the BJP. She is an esteemed leader and like my sister,” says Chouhan.

On July 13, as the STF hands over the Vyapam case to the CBI as per the Supreme Court order, all eyes will be on Bharti’s next move.  Will she go on record to say that the Indore crime branch deliberately bungled the case to implicate her?  It will also be interesting to watch  whether she  will put on record the STF’s  ‘double standard’ in implicating her for  her family priest’s alleged misdeed while giving the benefit of the doubt to the chief minister, whose personal assistant  is accused of  benefiting from the Vyapam code of manipulation in a pre-medical test.

It will provide no mean satisfaction to Bharti that Chouhan’s influence with the BJP high command is also on the wane. The scam has not only shaken the chief minister but has also earned the wrath of top BJP leaders. Acting upon Prime Minister Narendra Modi’s terse instructions, Union Minister Ananth Kumar (who is in charge of the BJP’s Madhya Pradesh affairs) had a midnight meeting with the chief minister and other senior party leaders from Madhya Pradesh on July 8 -9 in New Delhi.

Once Prime Minister Modi returns from his Central Asian tour, he is expected to take stock of the political fallout of the scam. An indication of his assessment of the crisis is likely to reflect in BJP president Amit Shah’s scheduled meeting with party leaders of Madhya Pradesh and Chhattisgarh on July 12 in Bhopal.

Uma Bharti, for one, must be looking forward to the outcome of this meeting.