Why the Bharatiya Janata Party Is Not Truly Bharatiya

As Prime Minister Narendra Modi recently proved yet again, the BJP masquerades as a national party when it is really only a party of Hindus.

Prime Minister Modi’s campaign statement on April 1 that the “Congress insulted Hindus”, and that its leaders are now running away from majority-dominated (Hindu) constituencies to minority constituencies is absolutely shocking – even by his own past standards of communal demagoguery.

No Indian prime minister has made such blatant comments, pitting the majority religious community against minority religions and dividing the nation.

Yet, the ruling party, the Bharatiya Janata Party, has always claimed the mantle of nationalism. In fact, this claim has been made quite virulently, so much so that anybody who opposes it is branded as an anti-national, or asked to go to Pakistan.

This is highly ironic considering that the Hindutva movement represented by the Hindu Mahasabha and the Rashtriya Swayam Sevak, the parent bodies of the BJP, had no role in India’s struggle for independence.

But what is more ironic at the present is that the BJP is not a national or even a nationalist party in a critical sense – it simply does not represent all sections of the Indian population.

Why the BJP’s ideology is opposed to the constitution of India’s national ethos in a fundamental way is because India is not a republic based on religion, but the BJP is.

Thus, no person other than one belonging to the Hindu religion can head the BJP, or become the prime minister from the party. A Muslim, Sikh or Christian could never do so. All BJP prime ministers, and chief ministers (of major states) – barring one, an RSS pracharak from the Jain community, a religion which has had interlinkages with Hindu traditions – have been Hindu.

This is not the case with the other major national party contending for power: the Congress. The Congress has had a Sikh prime minister despite its horrendous role in the 1984 Sikh massacre. It is quite rare in world democracies for a person from a religious community numbering less than 2% in population to become the head of the government.

Similarly, the Congress has had Muslim chief ministers (even if its numbers of Muslim MPs/MLAs is not anywhere near what the public perception is). 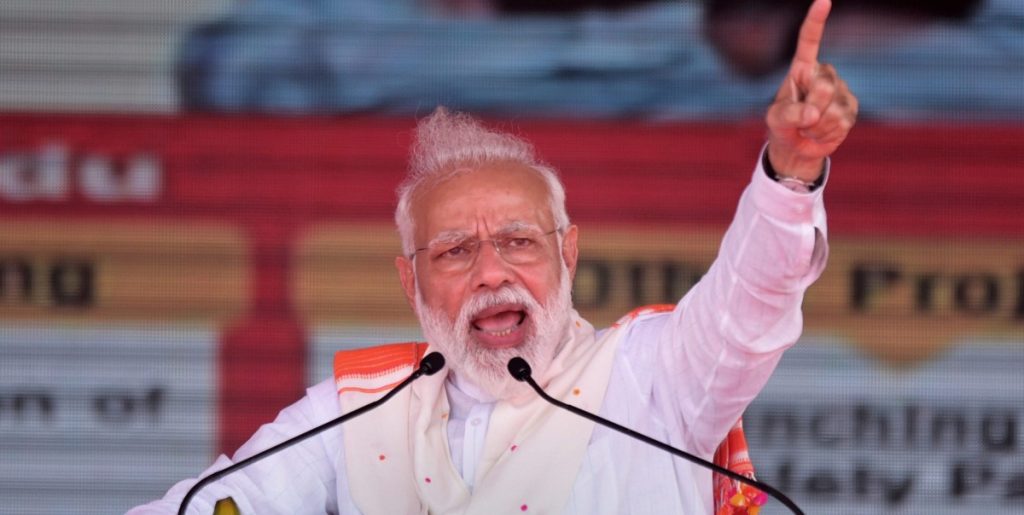 If you represent a whole nation nation, then why could a Muslim, Sikh or any other religionist not represent the BJP as prime minister?

Essentially, the BJP is not different from the Muslim League, or for that matter, the Akali Dal – parties representing the Muslims and the Sikhs respectively. In these parties, none other than a Muslim or Sikh can become their heads.

But the crucial difference between the BJP, the Muslim League and the Akali Dal is that the BJP, unlike the latter, masquerades as a national party, when it is really only a party of Hindus.

The constant branding of the Muslim as the undesirable other is the more overtly dangerous discourse, seen in the regular pronouncements of BJP ministers to even BJP-appointed governors, the latest egregious one being a Union minister declaring that Rahul Gandhi is a Muslim.

Modi’s comments explicitly seeking Hindu support by portraying the Congress and Rahul Gandhi as minority supporters are only a restatement of the same (and incidentally, the prime minister’s campaign speech violates Supreme Court rulings as well the model code of conduct, and many in the past have been disqualified for seeking votes in the name of religion).

No secular democratic republic can have a party representing only a religious majority.

Nevertheless, the BJP presenting itself as party that represents all Hindu interests is also deceitful. If it was earlier known as a Brahmin-Baniya party, in fact, it still remains so, despite a very contrary image in the recent times because of the ascension of Narendra Modi (belonging to a OBC community) as PM and Ram Nath Kovind as president.

A report by The Print shows that the BJP is overwhelmingly an upper-caste party. According to it, 75% of BJP’s national-level office bearers, 60% of its national executive, and 65% of state unit, and district presidents are upper-caste. The same upper-caste domination is also seen in the Uttar Pradesh ministry.

If the BJP’s nationalist, and even Hindu credentials are significantly dented by the above facts, there is one another aspect, which is equally critical, especially so for the present BJP-led government by Narendra Modi. That is the actual geographical spread of the BJP victory in 2014, which got submerged in the euphoria about the Modi “wave.”

Rather than a national mandate, the Modi wave was in fact a regional mandate almost completely based on the Hindi belt plus Maharashtra and Gujarat. The BJP, on its own, had virtually no representation in Kerala, Tamil Nadu, Andhra, Telangana, Orissa, West Bengal (just 6 seats out of 164), and the entire North-East, except for Assam. That is a significant part of India.

As political economist Praveen Chakravarty analysed, over 11 general elections in 40 years, the winning party/alliance had on an average won 60% of its seats from the “Hindi states”, and 40% from non-Hindi states. In 2014, the BJP/NDA got an overwhelming 85% from the Hindi states, the first time in Indian elections.

The subsequent attempts by the Modi government to promote Hindi as the national language (instead of its status as one of the official languages) in parliament, in government proceedings, in schools and in the United Nations is only a logical corollary of this conflation of India with Hindi-speaking regions, and Hindus with Hindi. It remains to be seen in if the Modi-led BJP is able to overcome this geographic limitation in the coming elections by making an impact in the South, Orissa and West Bengal.

No secular democratic republic can have a party representing only a religious majority. Of course, in a democracy there will be castes/religious groups that are oppressed, and marginalised, and which form political formations on the basis of that caste/religious identity. But the majority religion in a society, at least in India, is not an oppressed group.

Therefore, any party representing it, like the BJP, can only be a Hindu party and not a national party. And Prime Minister Narendra Modi just brazenly proved it once again.