Why Tamil Nadu Says #GoBackModi Every Time He Visits

While the BJP has tried to brush it off as the handiwork of the DMK's IT cell, Twitter users say it is reflective of the mood in the state. 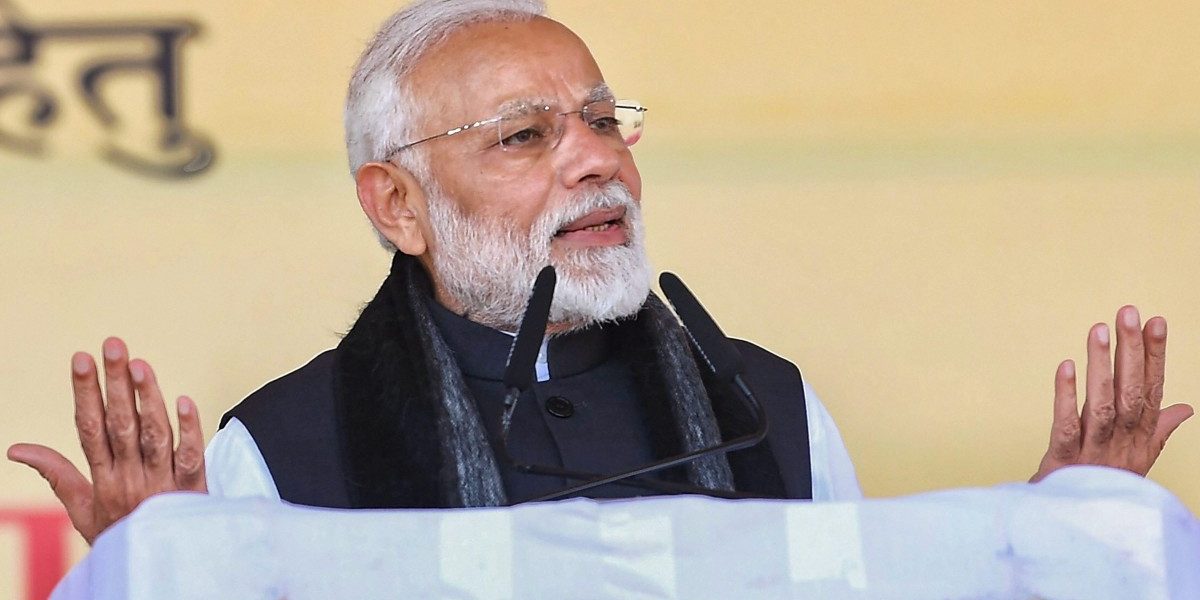 Chennai: On Friday, even as Indian Twitter was trending hashtags welcoming captured Indian pilot Abinandhan back home, Tamil Nadu was caught in a surreal dilemma.

Prime Minister Narendra Modi was visiting Kanyakumari to launch a slew of projects. The Tamil Nadu Twitter decided to do what it has always done since April 2018: trend the hashtag #GobackModi. It remained among the top Indian trends throughout the day. Some Twitter users also combined it with hashtags welcoming Abinandhan. Meme creators too were having a field day. 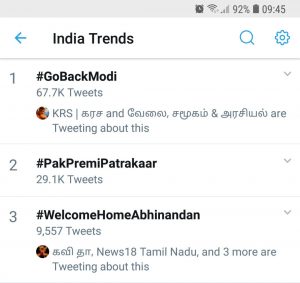 The hashtag topped the India trends.

The hashtag first trended on Tamil Twitter on April 12, 2018, in response to Modi’s visit to the state to inaugurate the defence expo. The opposition parties in the state had announced a black flag demonstration against Modi to protest the Centre’s delay in constituting the Cauvery water management authority. They accused the BJP of delaying it to win favour in the Karnataka assembly elections. Black flags were waved at Modi right from the airport, forcing him to sometimes take a helicopter. Unrelenting, the opposition released black balloons into the air.

The Twitterati had more reasons to be angry. A Twitter user who lives abroad said that Modi ignored the protests of Tamil Nadu’s farmers in Delhi for over 150 days. “From going back on NEET to refusing to visit when the cyclone Ochki struck the state, the Centre was clearly against the welfare of Tamil Nadu and its people. The delay in constituting the Cauvery management board was a turning point. I think the hashtag became popular because of the Cauvery issue,” the user said, wanting to remain anonymous.

Like this user, many Tamilians living across the globe also had a role in boosting the hashtag’s popularity, but it was also “essentially reflective of the ground reality”.

The #GobackModi hashtag trended again on January 27 this year, when Modi was in Madurai to lay the foundation for the AIIMS. Again on February 10, when Modi came to Tiruppur, it trended on Twitter.

Also Read: What Does BJP Have Against Wearing Black?

On all these occasions, despite attempts by pro-BJP Twitter users to boost #TNWelcomesModi, the #GoBackModi trended higher. At Tiruppur on February 10 and at Kanyakumari on March 1, the MDMK, led by Vaiko, also held black flag demonstrations against the prime minister.

That Twitter users from Tamil Nadu managed to ensure that the hashtag would top Indian trends on all four of Modi visits since April 2018 has raised many eyebrows. Evidently, the BJP has brushed it off as the handiwork of the DMK’s IT wing.

A reflection of Tamilians’ belief

But Twitter users say the accusation against DMK is an attempt to cover up the “anti-Modi sentiments of TN people”.

Kavitha Gajendran, a Chennai based activist, agrees. “#GoBackModi is the state of mind in India. But of course, the seeds were sown by Tamilians. It is not DMK’s efforts. In fact, that party’s head M.K. Stalin adopted the Tamil Netizens’ term of ‘Fascist Modi’,” she says.

Kavitha says the hashtag is used religiously by Tamil Twitter users when Modi is visiting. “I vehemently do too, for two reasons. It expresses tremendous dissatisfaction with the Modi’s government failure in handling a number of issues. These failures weakened Tamil Nadu as a state and India as a country,” she says.

The hashtag also indicates that Tamilians have rejected Modi and BJP, said Kavitha, adding that it has become a tool to express the collective thoughts of the state. “Eventually, it becomes a national movement that speaks up against the Centre. That is why every time the prime minister visits, #GoBackModi trends relentlessly. It goes on to trend at the national level or sometimes, even at the international level. This means that people from other states are also contributing to the trend.”

Writer and political observer R. Muthukumar says Tamil Nadu has always had the ‘culture of black flag demonstrations against Prime Ministers’. “There have been instances of black flags being waved against both Jawahar Lal Nehru and Indira Gandhi. In 1957, black flags were waved against Nehru after he was accused of criticising Tamil leaders. The DMK held a demonstration and at least 25,000 cadres took part in it. When Indira Gandhi came to Chennai and Madurai in 1977 after the Emergency, black flags were shown.”

But both Nehru and Indira Gandhi won the subsequent elections. Muthukumar says such a victory is not possible for the BJP now. “The ground is totally different. It is now a fight between pro-Modi and anti-Modi forces in Tamil Nadu, not just between two political parties. The field is vast. I think Twitter reflects this reality.”