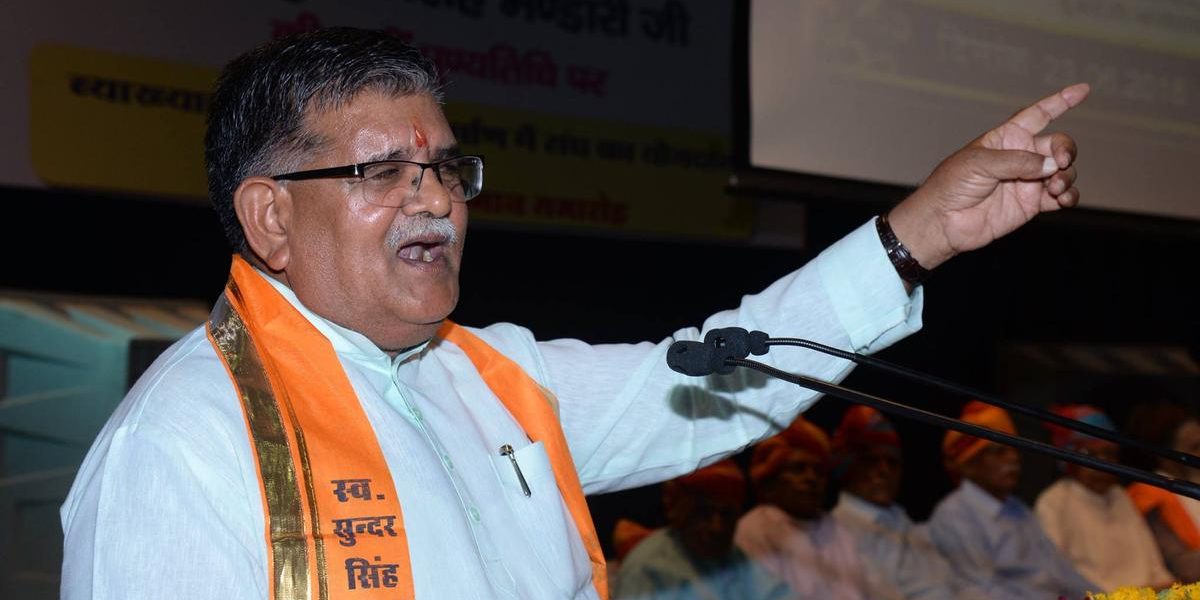 Jaipur: In the Bharatiya Janta Party’s legislature meeting held at the party headquarters in Jaipur on Sunday, former home minister and Rashtriya Swayamsevak Sangh man Gulab Chand Kataria was elected unanimously as the Leader of the Opposition. Rajendra Rathore, a seven-time BJP MLA and a close aide of Raje’s seen to be the frontrunner for the post, was declared Kataria’s deputy.

Kataria is infamous for his remarks supporting Pehlu Khan’s lynching. He had said that it was “alright” if some people caught those who were illegally transporting animals. He also claimed in the state assembly that Khan belonged to a family of cow smugglers, citing two closed cases against his son. Khan’s son had been acquitted in both cases filed by self-proclaimed “gau rakshaks“.

Recently, while appealing to the Hindu community to “unite” and vote for the BJP, Kataria at a public rally in Udaipur said, “If Hindus do not unite, cities in Rajasthan will turn into Pakistan. Why are our daughters running away with the puncture-walas? Save our girls from ‘love jihad’, else you’ll end up crying in despair.”

The move is also seen as symbolic of Raje’s weakening political position in Rajasthan. She had held the post between 2009-10 and 2011-13, before returning to power in 2013. As per party sources, she was keen on holding the post again. However, the party inducted her at into Central-level position, eyeing the upcoming general elections.

“BJP needed experience of the three former chief ministers including madam [Raje] in its central team, that’s why Gulab Chand Kataria has been made the leader of opposition, so that he could devote as much time in the state as required,” Satish Poonia, BJP spokesperson told The Wire.

In the run-up to the elections, Raje had retained her group of ‘yes men’ while allotting party tickets. Earlier, she had opposed party chief Amit Shah’s choice, Gajendra Singh Shekhawat, for state unit chief and brought in Rajya Sabha MP and RSS veteran Madan Lal Saini.

Moreover, equations between Raje and Kataria have never been the best. Kataria, who had once asserted himself as the chief ministerial candidate and declared he would take out his own yatra ahead of the 2013 polls, was made to roll back on his decision after Raje threatened to quit the party along with a significant numbers of MLAs. In 2018, Raje made him assist her in the ‘Gaurav Yatra’.

It is believed that the party made Gyan Dev Ahuja state unit vice-president against Raje’s will. She had refused him the ticket from his Ramgarh seat, after which he announced that he would contest independently from the Sanganer seat. Ahuja later thanked Amit Shah after he took up the post.

The party’s loss in the state assembly elections paved the way for the Modi-Shah duo to assert control over state politics. Kataria’s appointment is seen as an outcome of this.

The party legislators have maintained that the leader of opposition position is subordinate to the one to be taken up by a former chief minister. Recently, she was made the national vice-president of the BJP, along with the former chief ministers of Chhattisgarh and Madhya Pradesh.

“Madam herself announced Gulab Chand Kataria’s name for the post. There is nothing significant or controversial in this. The party will contest the Lok Sabha elections unitedly,” Ashok Parnami, former state BJP chief, told The Wire.

Addressing reporters, Kataria said that even when the BJP is not in power, it continued to raise the voice of people in front of the Congress, and so far the BJP has left no stone unturned in its role as the opposition. “We will take public issues seriously and not let Congress sit comfortably.”

Targeting the Congress, BJP national general secretary Arun Singh said that it is very difficult for grand old party to fulfil the promises it has made in its manifesto. The Congress government has not yet waived farmers’ debt as it has not been able to decide how many farmers are to be included in the programme.