Why Nitish Kumar's Recent Actions Are Causing Speculation in Bihar

Nitish does not speak much – at least to the media – these days. But whenever he does, his attack on the Bharatiya Janata Party’s core agenda is clear. 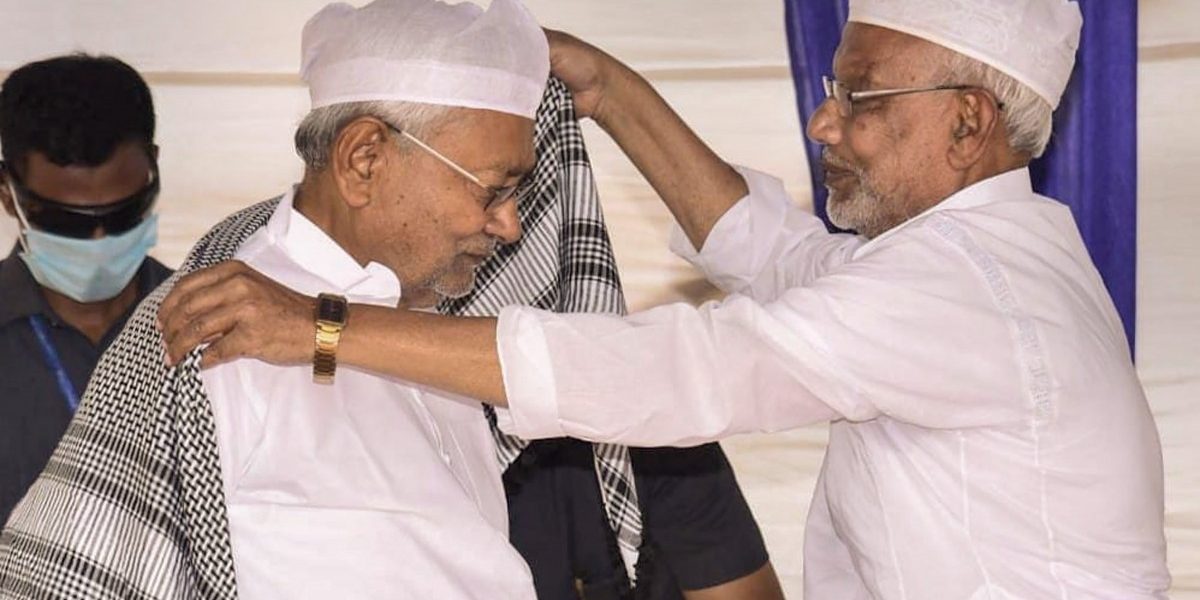 Last month, he walked up to the 10 Circular Road home of his predecessor, Rabri Devi, from his 1 Aney Marg residence to attend an iftar party hosted by the Rashtriya Janata Dal’s minority cell. He chatted with Rabri, Tejashwi Yadav and Tej Pratap Yadav, among other senior RJD leaders, in his trademark affable style.

The very next day he relocated from 1 Aney Marg – the house officially earmarked for the chief minister – to 7 Ciruclar Road. He had earlier shifted to this house in 2013, when he had replaced himself as chief minister with Jitan Ram Manjhi. Nitish collected all his belongings, including 11 cows, and shifted to 7 Circular Road on the pretext of ‘renovation’ at 1 Aney Marg.

Within a week of shifting to the new residence, the Janata Dal (United)’s minority cell hostel an iftar party to which Tejashwi – leader of the opposition in the Bihar assembly – was invited. After the event, Nitish escorted Tejashwi up to his car, parked outside the JD(U) office. An affectionate smile was writ large on his face.

Nitish does not speak much – at least to the media – these days. But whenever he does, his attack on the Bharatiya Janata Party’s core agenda is clear. “Pulling down loudspeakers from religious places is nonsensical. Our government has nothing to do with it,” Nitish said cryptically, in an apparent dig at his Uttar Pradesh counterpart Yogi Adityanath and other heads of BJP-ruled states, who are selectively targeting minorities under the garb of controlling ‘noise pollution’.

A day after Union home minister Amit Shah emphasised his government’s resolve to implement the uniform civil code, JDU national president Lallan Singh and parliamentary board chairman Upendra Kushwaha spoke out against it, saying, “A uniform civil code is not in the interest of a nation full of diverse cultures and customs.” 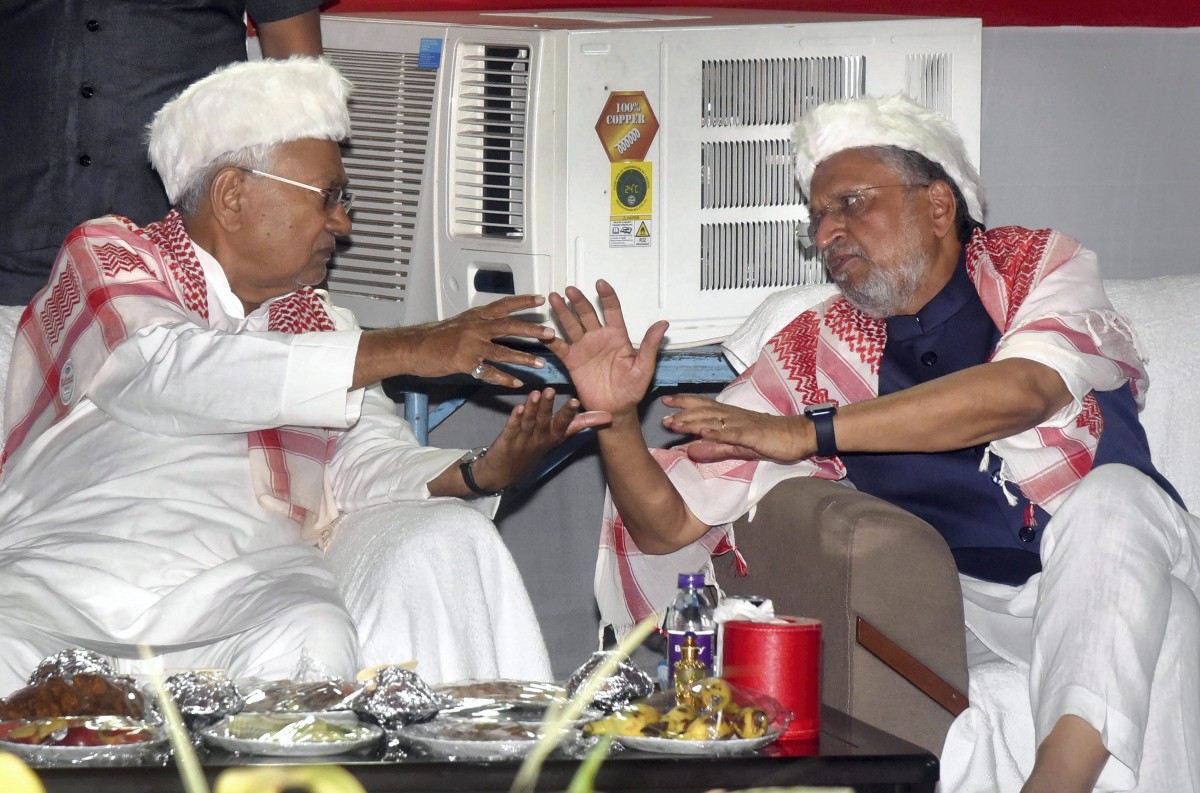 Late in March and early in April, Nitish travelled villages and localities around Bakhtiarpur, his place of birth, and Kalyanbigha, his ancestral home, meeting old friends and acquaintances and thanking them for the opportunity they gave him to serve the state and the country for so long.

In a bid to probe what Nitish is up to, this reporter managed to speak to one of his close confidantes. The confidante said, “Honestly speaking, I don’t know. Nitish ji doesn’t immediately reveal what he thinks.” He however added, “Badle badle mere sarkar nazar aate hain (My sarkar looks like changed man).”

In an impromptu discussion with some journalists in March, Nitish informally said that he had represented the people in all legislative bodies except the Rajya Sabha, which he desired to do. Nitish’s wish, expressed informally, fuelled speculations in the media that the BJP might offer him the vice-president’s position in the wake of Venkaiah Naidu retiring in August. In that case, Nitish might vacate his position as the chief minister for Nityanand Rai – the blue-eyed boy of Union home minister Amit Shah. Others speculated that Narendra Modi might offer him a high-profile ministerial berth in his cabinet.

Vinay Bihari and some other BJP MLAs – apparently backed by assembly speaker Vijay Kumar Sinha, whom Nitish had berated during the budget session – asked for a BJP chief minister instead of Nitish, since the saffron party has 77 MLAs against the JDU’s 43. Soon, both JDU’s and BJP’s senior leadership asserted that Nitish would complete his tenure as the chief minister. The present Bihar assembly’s term ends in November 2025 – 1.5 years ahead of the Lok Sabha polls due in May 2024.

While these speculations were doing the rounds, Nitish had a two-hour meeting with his party’s estranged former vice-president and election strategist Prashant Kishore. After that, he has acted in a manner that has led the media to now speculate that Nitish is at work to dump the BJP and return to the opposition camp once again. There are also speculations doing to the rounds that he might be working towards becoming the opposition’s joint candidate for the president’s position and hand over his chief ministerial position to Tejashwi, since the RJD has 76 MLAs in the state assembly.

But the point to think about here is will Nitish, an active politician, settle for a constitutional position, abandoning his JD(U)? Will he transfer power on a platter to the BJP, despite the sharp differences between the ideologies and values of the JD(U) and BJP? Will Nitish compromise with the BJP, which under the stewardship of Prime Minister Narendra Modi, Amit Shah and Adityanath has been perpetrating brutalities on minorities, for a gubernatorial position? Or will the opposition parties struggling against the BJP’s election machine want Nitish to settle down as the president or vice-president, abandoning them in the middle of the raging battle against Hindutva?

Even a naïve observer of Bihar politics understands that despite his party’s depleted percentage of votes and reduced number of MLAs, the BJP can’t do without Nitish in the 2024 Lok Sabha polls. If Nitish crosses over to the RJD, the saffron party in all likelihood will lose irreparably in Bihar in 2024. More than the likes of Vinay Biharis and Vijay Kumar Sinhas, Modi and Shah have a fair sense that their party will be smashed to smithereens once Nitish crosses over to the opposition. There is solid evidence for it – within a year of the BJP conquering Bihar among other states in 2014, the JD(U)-RJD-Congress Mahagathbandhan secured an absolute majority in 2015, reducing the BJP to 54 in the 243 member-Bihar assembly.

And perhaps Nitish’s strong bargaining position is also what creates the opposition’s hope in him. It would not be farfetched to assume that the embattled opposition parties across India are hoping for Nitish to joint them.

For now, all eyes will be on what Nitish does and says – at least till July/August, when the battle lines are drawn for the election of the president and vice-president.