If Himanta Biswa Sarma's claim is to be believed, the BJP has not helped by encouraging smaller parties to split the secular vote.

Badruddin Ajmal. In the background is a Congress campaign rally at Dispur, Assam. Photos: PTI

Guwahati/Baksa: “If Muslims vote one-sided in the second and third phase, it’s ‘Khela Hobe’. But I doubt. Himanta (BJP’s powerful minister Himanta Biswa Sarma) has his eye on all the 126 seats. He may be saying that he doesn’t need Muslim votes, but he is diverting their votes.”

Mukaddis Ali Ahmad, a resident of Barpeta, explains the meaning of the Khela Hobe song being played in an election rally in Baksa district of Assam.

Ahmad echoes the mass sentiment right about Sarma, who looms across the horizon of Assam’s politics, and who now has plans to dent the Muslim vote of the alliance between the Congress and All India United Democratic Front. The vote that the Congress felt could be crucial to oust to the BJP.

The Raijor Dal and Assam Jatiya Parishad, parties that were formed following the anti-CAA protests and are perceived to be anti-establishment, have fielded many Muslim candidates in a way that should damage the alliance’s Muslim vote. In Hajo constituency, the Congress’s Anwar Hussain is worried about AJP candidate Dulu Ahmed. In Karimganj North, the Muslim-dominated seat on the Bangladesh border in Barak Valley, Congress’s sitting MLA, K.D. Purkayastha, is facing the BJP’s Manas Dash, but the Raijor Dal has fielded Saha Bul Islam Choudhury. In Dhing, surprisingly, both the Raijor Dal and AJP have fielded a Muslim candidate each against the Congress-AIUDF alliance’s candidate Alhaj Aminul Islam. In Sonai, the AIUDF candidate Karimuddin Bharbhuiya finds an Independent candidate of the same name as well as several other Muslim candidates.

Earlier, one wondered whether such a tactful placing of Muslim candidates was incidental or part of a hidden ploy. Sarma has now asserted in an interview to an Assamese TV channel that he “encouraged” the formation of these parties in order to split Muslim votes. “Whether it is AJP or Raijor Dal or any other party, they have been floated according to the BJP’s strategy,” he said.

“It may certainly damage the Congress. There is certainly a gap between the ideology and actions of Raijor Dal and Assam Jatiya Parishad,” says Kaustubh Deka, assistant professor of political science at Dibrugarh University. 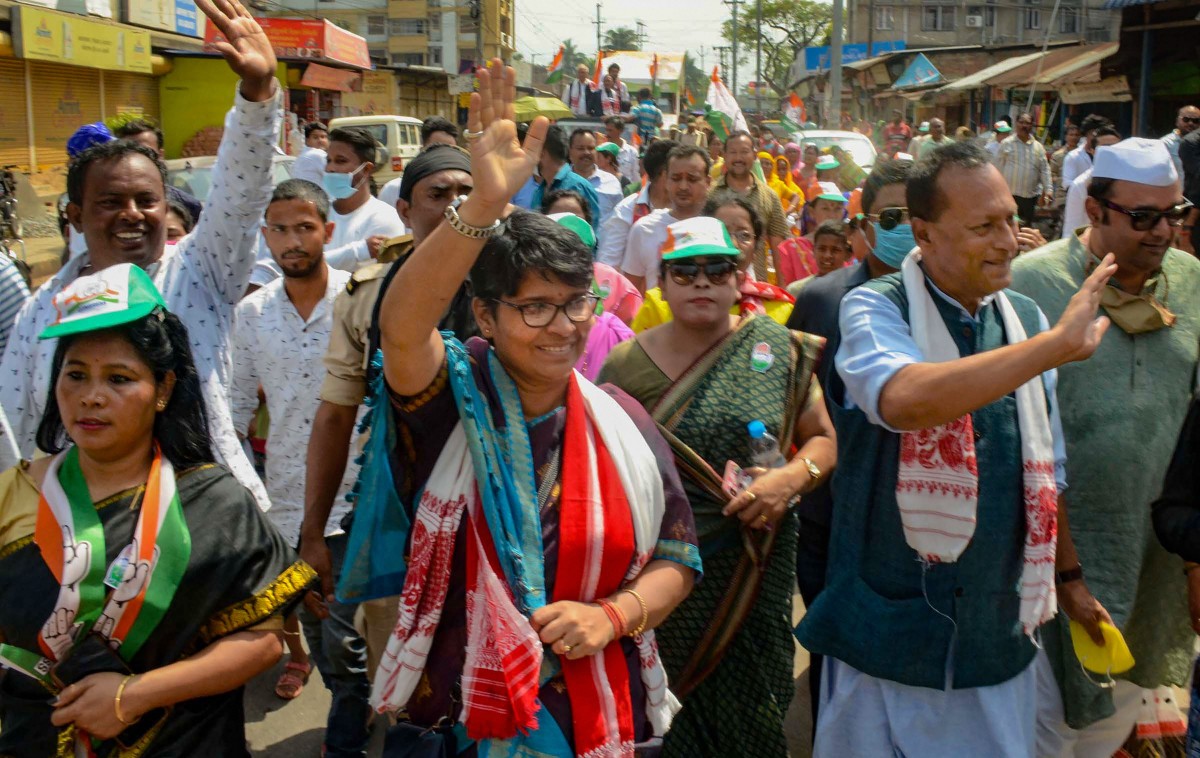 Any easy prediction about the Muslim vote in Assam gets resisted given the complicated ethnicity of Muslims in the state, with several communities locked in competing claims and contestations, and fissures and constraints on the ground. The state has more than one groups of Muslims, all with different histories and identities.

Consider Hajo constituency in South Kamrup district that has some 75,000 Muslim votes out of the total 1.7 lakh electorate. But the Congress candidate Anwar Hussain Ganesh, an Assamese-speaking Muslim, is unsure about the 35,000 or so ‘Miya’ votes. 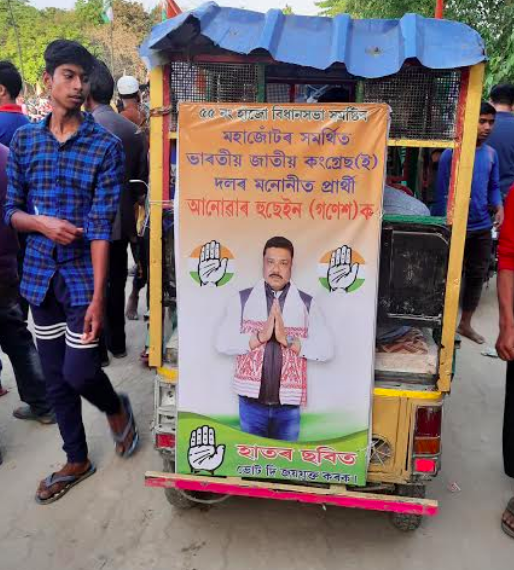 “We can get Miya votes if Ajmal bhai (Badruddin Ajmal) or (his brother) Sirajuddin campaigns in our area, but they won’t come because of the tussle between us and them,” Hussain’s elder cousin says. He emphasises his community’s proximity to the Assamese-speaking Hindus and that Hussain got the nickname Ganesh in his childhood because he looked like the Hindu deity.

Speaking to this reporter, Ajmal first says that the “Miyans might have been away from the Congress, but they will now vote for them given the polarisation by the BJP”. But he soon acknowledges that “there should have been efforts to resolve the differences between Assamese-speaking Muslims and Miyans”. The sentiment remains even though the anti-CAA protests have bridged the rift between the two Muslim groups to some extent.

The alliance between former rivals Congress and AIUDF may yield electoral dividends, but the parties have little coordination beyond the seat sharing. Misgivings remain about each other’s religion and politics, as except a few instances, the Congress has not called AIUDF leaders to campaign even for its Muslim candidates.

This precisely is the crisis of the prevailing model of secular politics. Electoral compulsions force Congress to approach Ajmal, without any attempt of a social cohesion. To fight the communal BJP the Congress takes the help of a Muslim party whose secular credentials it doesn’t really trust, and whose credibility it is skeptical of. And Ajmal is aware of it. “It’s sad that the Congress has not utilised me in the manner they should have. They are afraid that it might affect their secular votes. We don’t share the dais,” he says. But he also adds that “it’s their strategy. It will give them advantage in Phase one”.

On the surface, what appears as the Congress’s ‘Muslim dilemma’ is fuelled by its own ambivalence about the alliance. It is hardly surprising, therefore, that the BJP’s communal rhetoric on Ajmal is aided by the Congress’s inability to publicly own its ally. 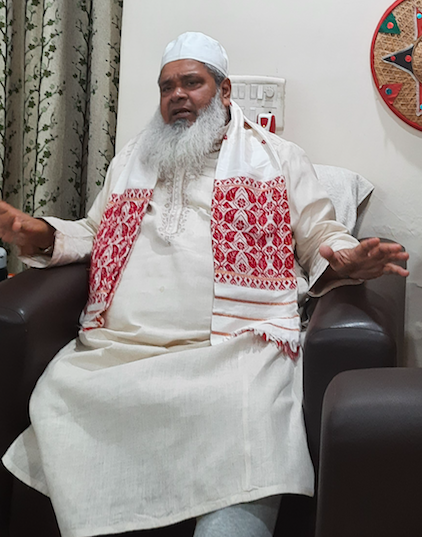 This model of secularism is not without its consequences. First, instead of bringing together the communities, what appears as a sly agreement may sow greater doubt in them and leave them in a contest that’s perhaps bitter than the earlier. Second, if the Muslim politics is not about empowerment, but merely to secure a bargaining place with rigid identities intact, it gets easily triumphed by majoritarian Hindu politics.

An archetypal case is of the Silchar Lok Sabha constituency in Barak Valley. A resident of the area and Dean of the Indian Institute of Management, Kashipur, Professor K.M. Baharul Islam tells the story. To wrest Silchar from his own party MP, Rashida Haque Choudhury, the Congress’s Santosh Mohan Dev enabled the migration of Hindu refugees from Bangladesh to Silchar in the 1970s. However, once entrenched in the area, the Hindus turned to the BJP and the saffron party opened its account in the region in 1991 when Kabindra Purkayastha won Silchar. History returned to bite the Congress with greater sting later. In the 2019 LS elections, Ajmal decided not to field his candidate in order to prevent the split of the Muslim vote in Silchar. And yet, the BJP defeated the Congress — the loser this time was Dev’s daughter Sushmita Dev.

The BJP has widened the communal rift in the state and vitiated the atmosphere in recent years. But the Congress-Ajmal alliance shows little intention of healing the wounds. If Congress leaders don’t want to be seen with Ajmal in an election rally because of the fear that it may damage its non-Muslim votes, it’s not hard to guess the situation when they share the state’s cabinet — that is, after the Muslim vote turns one-sided.

The model of slyly appropriating the Muslim vote has led to devastating consequences in the Hindi heartland. When the results of the current assembly election are in, the Congress is likely to find that it needs a new imagination of secular politics to counter the Hindutva forces, not the one that it pursued in Assam.

Ashutosh Bhardwaj is a journalist and writer.