Who Should Karnataka Blame in the Cauvery Dispute? History Has Some Answers

In normal monsoon years, Karnataka has no problems in releasing water from the Cauvery to Tamil Nadu; the issues arise during the distress years. 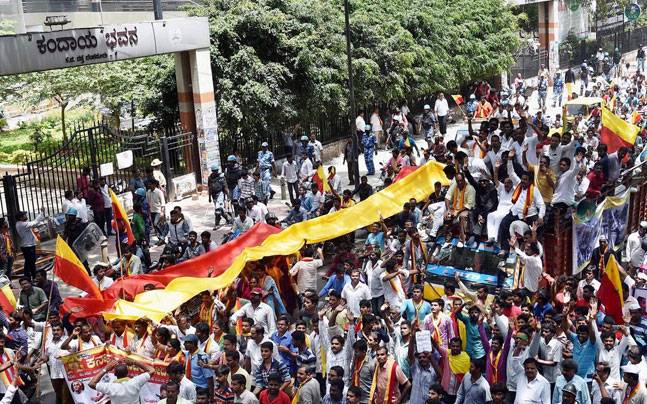 Agitators take out a protest march in Bangalore during the Karnataka bandh on Saturday on the Cauvery dispute. Credit: PTI

Is it the end of a dispute or the beginning of a fresh one? This was the question that had been haunting one’s mind ever since the Cauvery Water Disputes Tribunal came up with its final award, nearly 17 years after its formation, in 2007. Now nine years after the award, it is quite evident that the dispute has not found any resolution, and in fact keeps raising its ugly head periodically.

As the Cauvery river has ebbed and flowed , sometimes giving bountiful water and sometimes making people thirst just for a few drops, the two states at the centre of the dispute, Tamil Nadu and Karnataka, have also reacted accordingly. A good monsoon meant no tensions between the two; lack of adequate rainfall brought out the worst among the people as well as in the politicians of the two states. One had hoped that all this would end with the final award, but that has not happened, sadly.

Though lots has been written about the award and its implications since 2007, some basic misunderstandings seem to prevail even now, leading to further tensions. One of the most basic misunderstandings, perpetuated by a section of the media in Karnataka and not helped in any way by overzealous parochial-minded politicians, is that Tamil Nadu has been given 419 TMC ft. of water, while the interim award passed in 1991, had given it only 205 TMC ft.

If this were true, everyone and their uncle in the Cauvery basin in Karnataka would have been justified in being up in arms. The claim, however, has no basis in facts.

Let me attempt to put the award and statistics in simple terms. What was the basic mandate before the tribunal, if one cuts through all the maze of legalities and politics over the issue? It was to come to some conclusion about how much water is available in the Cauvery basin, comprising of the four States – Karnataka, from where the river originates, Tamil Nadu, where it flows in the biggest area, Kerala which contributes more water to the river than it utilises, because of geography, and Pondicherry from where the river flows into the sea, Bay of Bengal.

After years of calculations by experts and arguments by lawyers before the tribunal, it decided that at 50% dependability (of the monsoon), 740 TMC ft. of water would be available annually.

The next mandate before the tribunal was how best to divide this 740 TMC ft. between the four states annually. Again, after years of argument and counter argument, and expert opinion, it allocated 419 TMC ft. to Tamil Nadu, 270 TMC ft. to Karnataka, 30 TMC ft. to Kerala and 7 TMC ft. to Pondicherry and left 14 TMC ft. for environmental purposes. It also directed Karnataka, which is the upper riparian state (where the river originates), to ensure that 192 TMC ft. is given to Tamil Nadu annually and fixed a monthly quota to be given.

Confusion must be cleared

This is where all the confusion is created and must be cleared. First of all we need to know how and from where this 740 TMC ft. is generated. How do we arrive at that figure? In simple terms, 270 TMC ft. which Karnataka is allocated plus 192 TMC ft. which it has to ensure to Tamil Nadu, comes to 462 TMC ft. This is the quantum of water, which, according to the tribunal, is the yield from the river within Karnataka annually. So out of 462 TMC ft. Karnataka has to give 192 TMC ft to Tamil Nadu.

On the face of it, it certainly seems like a major injustice to Karnataka, no doubt. How did this happen? The answer to this lies in history, which we cannot re-write now. It so happened that rulers like the Cholas, who ruled that part of the country, which is now Tamil Nadu and where the river flows, had the foresight to build reservoirs and check dams in the tenth century and later, to utilise the water for irrigation. On the other hand the rulers of Mysore built their first major reservoir, K.R.Sagar only in 1934.

Tamil Nadu farmers therefore had the early advantage, and when the agreements in 1894 and 1924 were signed, already over 15 to 20 lakh acres or even more was already under irrigation in that state. Karnataka in 1924 was claiming only 6.5 lakhs acres and at present it has managed to irrigate only about 15 lakh acres. This meant that about 80% of the annual yield from Cauvery was being utilised by Tamil Nadu farmers, even upto 1974, when Karnataka terminated the 1924 agreement.

With the mix of historical advantage blended with foresight as well as what is known as prescriptive right, Tamil Nadu naturally enjoys a greater share. It cannot be anyone’s argument that those who have been enjoying the water all these years should now be denied it. But going by the 1924 agreement, Tamil Nadu’s share, which was over 80%, has now come down to 57% and Karnataka, which was using about 16%, now gets 37%.

So is the award an injustice to Karnataka? Yes, it is, but more for historical reasons than a conscious act perpetrated by the tribunal in 2007. Should Karnataka accept it without protest? No, because there are certain aspects to the award which need clarification and modification, which Karnataka through a special leave petition sought from the Supreme Court in 2007 itself. In fact even Tamil Nadu and Kerala have filed similar petitions – as these two states were also not fully happy with the award – which till now, unfortunately, have not been adjudicated.

Where did the tribunal get its numbers from?

Going by cold statistics, which is what ultimately has by and large played a major role in the tribunal’s final award, we get some answers.

Take for instance one of the major objections of Karnataka to the final award, which even the state’s legal and technical teams have endorsed. That is about the monthly allocation made, especially in the first four months of the water year, June to September, by the tribunal. The allocations are June 10 TMC ft, July 34 TMC ft, August 50 TMC ft and September 40 TMC ft. These allocations are seen to be worrisome, as Karnataka, which is served to a large extent only by the south west monsoons, which start in June, may find itself in a quandary if the rains are not normal or fail in any year.

This problem occurred even before the tribunal award, especially in 2002-02 and 2003-04, when successive failures of the monsoon created a major problem. And again in 2012 and this year, we have faced similar problems, leading to the Supreme Court directing Karnataka to release 10,000 cusecs per day for 10 days, triggering protests in Karnataka.

Given this problem, why did the tribunal decide to allocate 134 TMC ft. for these four months? The answer lies in the figures which Karnataka itself had presented before it. According to the state’s own data, during the 16 years before 2007, Karnataka had released on an average 134.18 TMC ft. during those four months, to Tamil Nadu, measured at Biligundlu. No wonder the tribunal took the average and allocated it monthly.

The stress of distress

So the conclusion from this is that in a normal year there would be no difficulty for Karnataka to release the quantum of water, which the tribunal has allocated. The problem comes only in distress years like in 2002-03 and 2003-04 and again in 2012 and now in 2016. So what should the distress sharing formula be?

A lot has been said about the formula. In fact, the entire dispute between Karnataka and Tamil Nadu is mainly about what is to be done in a distress year. However, what one has to understand is that the mandated method of sharing distress is exactly what Karnataka’s experts, from both its legal and irrigation departments, had been demanding before the tribunal.

The final award points out that during distress, there has to be a pro-rata sharing of water, which on the face of it means, depending on the water availability, reducing the share to all of the states as per the percentage share allocated to them. This is what Tamil Nadu wanted. However, a careful reading of the award indicates that it has gone beyond mechanical reduction and has suggested a liberal approach wherein the regulatory body (to be set up) will have to consider the entire basin flows, including the impact of the northeast monsoon, before deciding. This is exactly what Karnataka wanted. So where is the problem here?

But yet, there is a strong feeling that the allocation for the first four months needs to be reduced so that Karnataka’s burden is lessened and it can provide for its own farmers. There is also an argument that the tribunal has gone by the 1924 parameters in allocating the water for these four months when Karnataka’s needs were limited. This is an issue worth challenging, though how far Karnataka may be able to convince the Supreme Court is a moot point, considering the cold statistics.

However, one issue which the tribunal has over-looked, and which has been challenged, is the fact that Tamil Nadu has plenty of ground water resources, which Karnataka hardly has. Tamil Nadu, according to an expert body’s conservative estimate, has anywhere in the region of 20 TMC ft. of ground water. If this had been taken into account, the burden on Karnataka would have been reduced.

Another important point which emanates from the final award is the stress on better water management. Both states have been found wanting in this regard, and this is something which needs to be taken up on a war footing. Tamil Nadu, especially, has to improve as it grows two paddy crops which are water intensive, and the techniques which continue to be adopted do not help in conserving water.

So it is time that both states get down to the task of improving water management techniques and crop patterns. Karnataka, in the meanwhile, would do well to start planning for an additional reservoir at Mekedatu to utilise the surplus water, generate power and ensure water supply to Bangalore and Greater Bangalore, without wasting time.

All that the tribunal’s final award asks Karnataka to ensure is 192 TMC ft. annually.

It’s another matter that during the period June-August for the past seven years, including 2016, the flows from Karnataka have been less than the 94 TMC ft. awarded by the tribunal.– except for three years 2007-08, 2013-14 and 2014-15.  And it is these months of shortage, when Karnataka has not been able to fulfil it obligations due to weak early monsoons, which creates demand from Tamil Nadu and hesitation from Karnataka. As the annual flows show, ultimately Tamil Nadu usually gets more water than has been prescribed by the Tribunal annually. But, sadly,  politicians on both sides don’t want to let go an opportunity to make a hue and cry, whenever they get an opportunity.