As we have seen countless time, BJP often exploits the fact that Congress does not speak about Muslims.

Rahul Gandhi and Priyanka Gandhi Vadra. In the background is a collage of activists arrested for sedition. Some of them are out on bail. Photos: PTI and Twitter

The Congress Party notched some notable wins in recent by-elections and more durably has made some striking political moves in recent weeks. It chose in Charanjit Singh Channi its first Dalit chief minister in Punjab, thus canceling out ambitions of Navjot Singh and Captain Amarinder Singh.

Next up it signed on the gifted orator and former JNU students’ union president Kanhaiya Kumar, alongside Gujarat leader Jignesh Mevani who pledged to join the Congress when the anti-defection law allows him to. Priyanka Gandhi made headlines following the mowing down of protesters at Lakhimpur Kheri – and there have been eye-catching moments with young policewomen taking selfies with the Congress leader and the latter being fawned over by women in Uttar Pradesh. The party has gone on to announce that 40% of its assembly seats in the upcoming UP elections will go to women; it announced a farm loan waiver, minimum support prices for wheat and sugarcane and scooties for women graduates.

It is clear that the Congress is not only doubling down on the leadership of the Gandhi siblings (notwithstanding internal murmurs), but that the party is also settling into a firmer social democratic tenor of politics. Kanhaiya will be a much needed addition to the Congress’s roster of speakers, given that few beyond the Gandhis in the party are capable of commanding attention in public meetings or are even willing to speak about Modi directly as the young leader can. Through these moves, Gandhi appears to be returning to the promise of the United Progressive Alliance’s first term which was to build a centre-left coalition across the nation, while making a pitch again to its traditional base among Dalits.

But even as the party makes explicit its outreach to Dalits and selectively to the Left, the Congress’s solidarity with Muslims is pronouncedly muted or absent. Rahul Gandhi did tweet in support of Mohammad Shami after the cricketer was viciously trolled by the right-wing after the recent India-Pakistan cricket match but generally the party steers clear of advocacy for Muslims even if they are singled out for harassment and violence during BJP rule. The Congress hardly ever speaks about civilian suffering in Kashmir, it stood by while anti-Citizenship Amendment Act protestors were arrested, nor do its leaders visit homes of Muslim victims with quite the regularity that they do Dalit homes.

One has to wonder following Kanhaiya’s accession why, for instance, the party did not expressly advocate for the scholar Umar Khalid since the latter too emerged in the student movement at JNU after February 2016 and has been unjustly incarcerated for over a year well after the police has allegedly been unable to find any evidence of his involvement in the 2020 Delhi riots. If the Congress cannot openly stand with a promising historian who wrote an impressive doctoral thesis and speaks powerfully about the constitution, what are the chances it can ally with ordinary Muslims?

The reasons for this reticence are not hard to find.

The Congress has been wary of being associated with Muslims openly after pandering to conservatives by overturning in parliament the Supreme Court verdict in the Shah Bano case in 1986. The BJP has managed to stick the label of pseudo-secularism on the Congress, often accusing it of appeasing minorities to garner votes. As a result, Congress and other non-BJP parties have settled into a default mode of politics where Muslim concerns are barely spoken of publicly but their electoral support is sought or assumed in return for protection during their rule.

The constitutional rights of Indian Muslims are, in effect, privately assured in exchange for their effacement from public life – this is but one step removed from BJP leaders and rank and file who would rather that India not have Muslims and other minorities in the first place.

The Congress leadership seems to think that this approach will work in polls. The hope apparently is that the brand visibility of the Gandhis, their rhetoric of constitutionalism, symbolic gestures to Hindu piety (via offering prayers, visiting temples, pointing to Brahmin lineage) and the continued incompetence of the Modi government will create the groundswell against the BJP and in favour of the Congress. 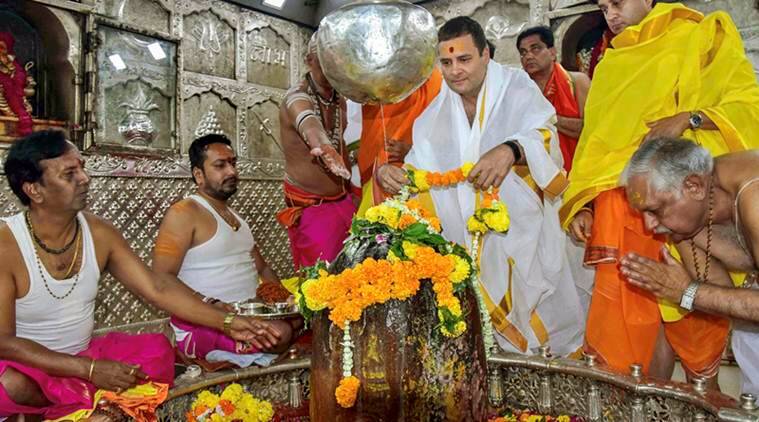 There is, however, little reason to believe that this strategy will succeed. There is no proof yet that Priyanka’s meetings will lead to desired electoral outcomes in Uttar Pradesh. The Congress desperately lacks the funds and the organisation to translate rallies into votes, as Rahul Gandhi impressive campaign in 2019 elections showed. This may work to preserve Congress chances in states like Karnataka, Rajasthan and Chhattisgarh but is unlikely to have the desired effect in the larger states of Uttar Pradesh, Bihar, West Bengal and Maharashtra.

One of the reasons why this approach will not work is because it originates from a misunderstanding of the nature of political contestation in India.

The BJP and the wider Sangh Parivar are no longer interested in governing India well, they are instead focused on the politics of meaning, of refashioning Hindu personhood through the constant exposure to hatred of the Muslim. By illegitimating every Muslim from Shahrukh Khan to the neighbourhood hawker to bangle seller, the right-wing is effecting a New Partition to forge an enduring Hindu vote that the BJP can monopolise.

What is at stake in national politics is not merely the matter of transfer of power but that the Sangh parivar is staging a moral and social counterrevolution that seeks to rewire Indians along bigoted lines, through majoritarian ideology, money, weaponised media and Big Tech.

To counter this, the Congress and opposition parties need to find ways to infuse life into the values they espouse and that can happen only through newer forms of political practice. The Congress has to realise that the BJP has defined identity politics in such extreme terms that the former’s weak gestures to Hindu tradition are bound to have little impact on audiences that are already willingly radicalised.

The only way for the Congress to combat this is to evolve a clear, coherent counteroffer on what it stands for. Rahul Gandhi appears committed to the politics of decency, civility and constitutionalism. For those to be something more than mere bromides those values need to be expressed and deployed in real life political situations. The Congress talks up the idea of India but it needs to embody it in everyday politics by clearing positing that being Indian and Hindu can coexist with unashamedly recognising minority rights and their right to a life in India.

The Congress also needs to use events to drive values like the BJP does. The right-wing is exceptionally good at using terrorist attacks or (alleged) fireworks after cricket matches to cascade and reinforce anti-Muslim messages through society. Likewise, the Congress and other opposition parties need to use instances of brazen injustice as opportunities to reinforce progressive values. The rhetoric of constitutionalism will be emptied of meaning if it doesn’t dare to name those endowed with rights or fails to stand by those oppressed. The party should remember from history that struggles for civil rights and the politics of resistance are inseparable from advocating for political prisoners, as India’s freedom struggle has shown. 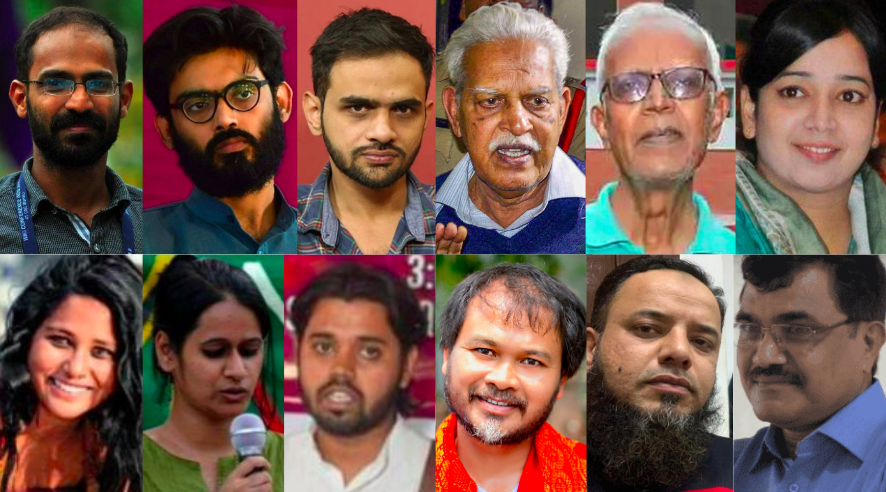 The Congress has been seriously remiss in failing to speak for Khalid and several others falsely accused in the anti-CAA protests. It has also been strikingly muted about the unjust incarceration of Sudha Bharadwaj and the Bhima Koregaon accused, highlighting yet again the party’s schizophrenic attitude towards the broader social movement Left.

There have been phases when both sides work together, but for most party Congress governments and career politicians have either repressed social movements or electorally reaped the benefits of their activism.  The Congress equation with the Left is often a function of high politics – who gets along well with whom in Delhi – and a derivative of political calculations in Kerala where the parties compete for power. But beyond that the Congress has hitherto not felt an obligation to the wider Left in movements, parties, universities, unions and media that generate the ideological opposition outside of parliamentary politics which the Congress gains from.

Given that the BJP is now out to vanquish all opposition space, it should be imperative for the Congress to make explicit its ideological and political consonance with the Left.

The Congress must also understand the broader effects of not speaking up for minorities. The BJP exploits the fact that the Congress does not speak about Muslims by constantly producing controversies and talking points about minorities in the public sphere. As the Congress refuses to get into these cultural battles, the BJP proceeds uncontested in its attempt to reshape Hindu psyche – by constantly producing Muslim ‘events’ in the public domain it perceptually drags Indian politics to a space where it becomes an all-Hindu affair rather than an Indian one where the terms of different groups living together are constantly negotiated.

In abstaining and ceding space on these issues, the Congress does not get to demonstrate what an alternative form of being Indian and Hindu can be like.

The erasure of Muslims in public life, which the BJP assiduously pursues in different ways, is designated to rob them of their place in the Republic. If the Congress has to instantiate constitutional politics, if it is serious about speaking for India it has to speak for minorities that make that India, India.

Skeptics would argue that such a purist approach to progressive politics is hardly realistic in India. But then again that’s seeing politics as a matter of transfer of power rather than contending with the abyss the nation is warming itself in. Only an unapologetic defence of human worth and dignity can realise the promise of the constitution and meet the challenge of a misguided, violent ideology. The Congress may not be winning elections but it is still big enough to set the tone for opposition rhetoric nationwide and shape political discourse.

The BJP has got its moral politics sorted. Beyond the realm of caste and local calculation, the Congress and opposition parties must too.

Sushil Aaron is a writer on Indian politics. He tweets @SushilAaron.