Ahead of the assembly elections, Mamata Banerjee's party has undertaken efforts to reach out to specific communities in a bit to arrest the BJP's gains. 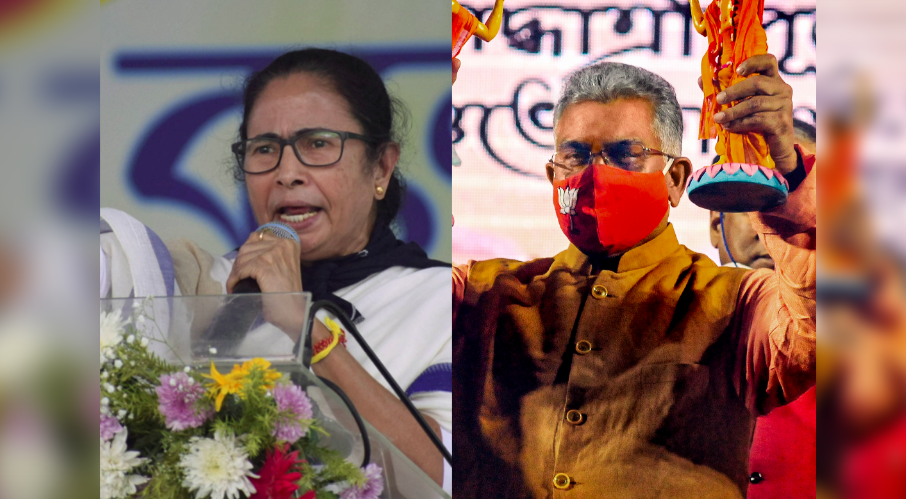 “In West Bengal, the key term is ‘party’. It is indeed the elementary institution of rural life in the state – not family, not kinship, not caste, not religion, not market, but party. It is the institution that mediates every single sphere of social activity, with few exceptions, if any,” writes noted political scientist and anthropologist Partha Chatterjee referring to Dwaipayan Bhattacharyya’s theory of “party society.”

Why is “party society” in the limelight now? Because with the approaching assembly election, Bengal is witnessing many shifts in its political landscape. Arguably, the major one is its transformation from ‘party society’ to ‘identity politics.’

On February 4, probably for the first time, the Trinamool Congress (TMC) organised a convention solely for the Scheduled Caste (SC) and Scheduled Tribe (ST) communities in Kolkata’s Gitanjali Park. Speaking at the event, chief minister Mamata Banerjee said, “You are my (greatest) possession. You are my biggest assets….Last time they (BJP) won many of your seats; has it given you anything in return? To live peacefully in Bengal, say goodbye to BJP.”

The BJP has performed exceedingly well in rural Bengal – especially in the SC and ST-majority districts Uttar Dinajpur, Dakshin Dinajpur, Bankura, Murshidabad and Nadia districts, and the Adivasi-dominated Jangalmahal belt.

For the past few months, Banerjee has been taking every possible measure to reach out to Dalit, Other Backward Classes (OBCs) and ST communities.

Of late, Banerjee’s speeches often refer to the various backward caste and SC/ST communities such as Bauri, Bagdi, Kamtapuri, Matua, Tapashili, Gorkhas, Lepchas, Adivasi, Dule, Rajbongshi, Jele and Kurmi. Her speeches seem designed to draw the attention of people who belong to these communities.

In July 2019, for the very first time since she assumed office in 2011, Mamata held a meeting with all 84 SC and ST MLAs. Later in September, a special cell was launched for the redressal of grievances of people belonging to the marginalised communities of the state.

In a significant cabinet shuffle in November 2019, Mamata removed Rajib Banerjee (a Brahmin), who was in charge of the Backward Classes Welfare Department and the SC, ST and Tribal Affairs Department and gave the charge to Rajbongshi leader Binay Krishna Barman. The Rajbongshis form a part of the SC community in the state’s northern part.

Shantiram Mahato, an OBC leader, was brought back as the minister for Western Region Development, clearly as a reaction to the BJP making inroads into the region.

In September 2020, Banerjee also announced setting up of a Dalit Sahitya Academy and handed over a grant of Rs 5 crore. The state government appointed writer Manoranjan Byapari, a Dalit, as its chairman.

In December 2020, TMC launched a report card highlighting the state government’s welfare policies and development projects over the past 10 years. The welfare of SC/ST communities finds a special mention in the report card.

The party claimed that under its tenure, the yearly budget for SC/ST welfare schemes has more than doubled; nearly 91.8 lakh SC/ST students received education scholarships; over 12 lakh SC/ST senior citizens received monthly pensions. It also said that crimes against SC/ST communities in Bengal are one of the lowest in India. 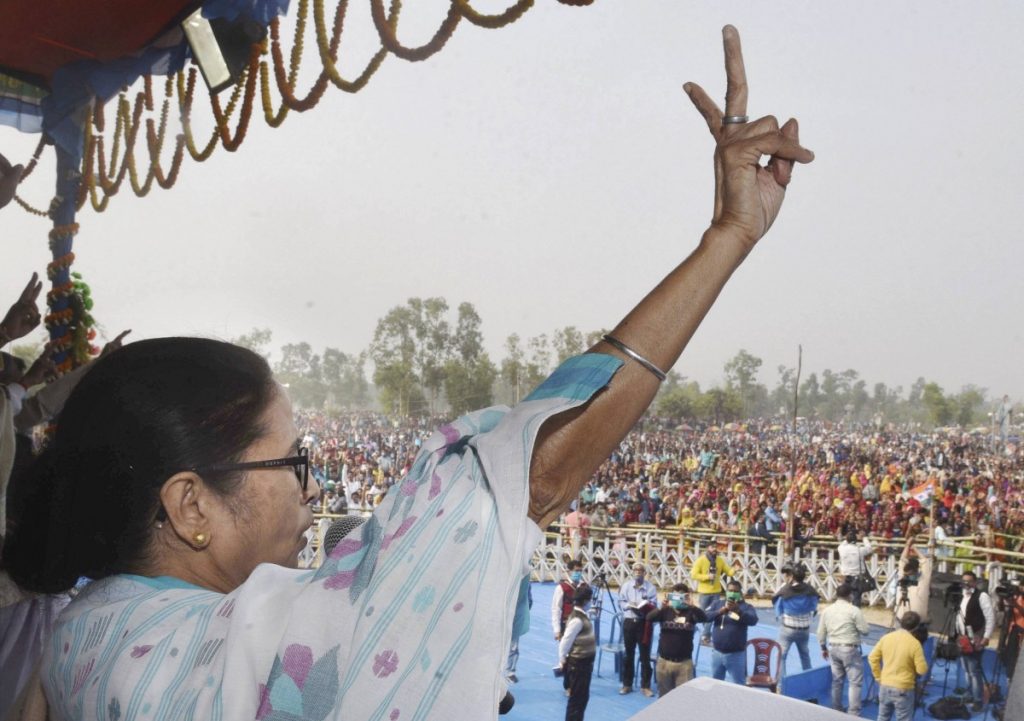 In January this year, Banerjee promised Ajit Prasad Mahata, a top leader of the Kurmi community, that her government would resend the proposal asking the Centre to reinstate the community in the ST category. Kurmis played an important role in deciding the outcome in around 35 assembly constituencies in the ST and Adivasi-dominated Jangalmahal belt.

These are targeted interventions to appeal to the Santhal, Rajbongshis and Kurmali and Kurmi speaking populations of the state.

The Wire has learnt that most of Banerjee’s moves at this stage bear the telltale marks of poll strategist Prashant Kishore, whose organisation I-PAC teamed up with the TMC right after the 2019 parliamentary election debacle.

I-PAC designed Duarey Sarkar (government at your doorstep), a flagship TMC campaign which has distributed over 10 lakh caste certificates to members of the SC and ST communities in two months.

A senior associate of I-PAC told The Wire, “Our team has been on the field for over one-and-a-half-year now. We collected detailed and specific information from all 294 seats, which were analysed and campaigns are rolled out targeting various groups/communities.”

Much of what the chief minister has done in the recent past or is still doing appears to be a response to the BJP’s political play. The saffron party has managed to consolidate a significant number of Dalits, Adivasis and OBC groups in rural Bengal. Its Hindutva campaign and sustained opposition to the state government’s alleged highhandedness has helped the BJP create a strong anti-incumbency stir on the ground. 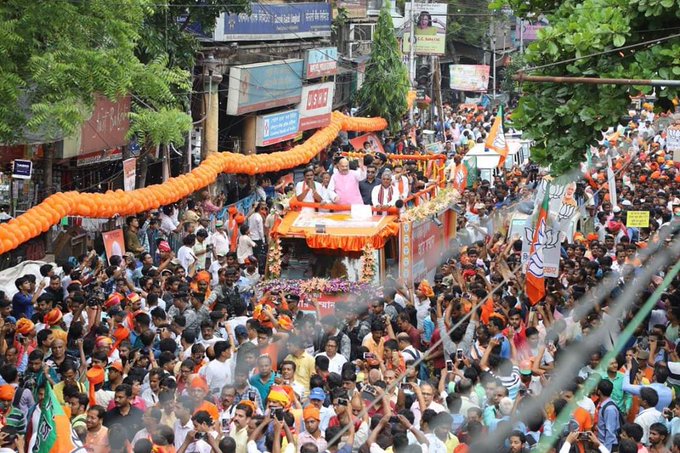 Political anthropologist Adil Hossain said that with the BJP’s rise in Bengal, religion-based nationalism has challenged ‘party society’. “The BJP saw OBC politics in Bengal as an untapped potential that could be used to its advantage. Welfare politics alone can’t win elections. Parties must devise target group-specific welfare measure. To counter the BJP’s identity politics, Mamata is now coming up with community-specific welfare schemes,” he said.

Caste and identities never played a significant role in Bengal elections. The electorate, especially in rural areas, only identified themselves with the political party that they support, superseding all social institutions such as caste, religion, clubs and sectarian foundations.

Many political experts see this shift as the most notable political development in the past four decades. What prompted this shift?

How Bengal got here

The Congress is seen as a party of elites and has overlooked the caste problem, be it Bengal or elsewhere. When the Left Front came to power in 1977, a large part of their campaign revolved around the settlement of Bengali refugees (mostly people from Dalit communities) coming from Bangladesh.

But once the communist government came two power, they followed the Congress approach. Things got worse in 1979, when the state government went on a mass killing spree of Namasudra refugees in Marichjhapi island in Bengal’s Sundarbans.

The longest-serving chief minister of West Bengal, Jyoti Basu, once infamously responded to the Mandal Commission saying “there were only two castes in Bengal – rich and poor.”

In complete contrast, the CPI(M) in other states, particularly in the Hindi heartland, has been forcefully demanding the implementation of the Mandal Commission report and reservations.

This upper caste hegemony in Bengali society and politics completely ignored the historical sufferings and access to basic necessities of the backward castes.

Ajay Gudavarthy, associate professor at the Centre for Political Studies, JNU, said, “It was the larger social identities of being a peasant over the caste-based identities that were at the root of the CPI(M)’s uninterrupted rule for 34 years.”

To overthrow the Left Front government, it was Mamata’s Trinamool which started identity politics in the state—hobnobbing with a member of the Thakurbari, the custodian of the Matuas. Banerjee met Binapani Devi (popularly known as Boro Maa), the matriarch of Matua Mahasangha, and sought her support.

After coming to power in 2011, the TMC appointed Manjul Krishna Thakur, Boro Ma’s younger son, as minister for micro, small and medium enterprises. Binapani Devi’s eldest son, Kapil Krishna Thakur, joined the TMC and contested the 2014 general election from the Bongaon constituency. When Kapil Krishna died in 2015, his widow won the seat in a by-election on behalf of the TMC.

The party’s identity politics lost steam, but the ‘party society’ model of politics remained and thrived under the new flag and symbol. The TMC focused more on breaking the opposition, mainly the CPI(M) and the Congress.

After the BJP came to power at the Centre in 2014, the saffron party began focusing on Bengal, piggybacking on the RSS. Since the TMC had deserted the identity politics plank, the BJP used turned it to its advantage.

Maidul Islam, a professor of political science at the Centre for Studies in Social Sciences in Kolkata, told The Wire that the pattern is similar to “what happened in Eastern Europe”, where there was a fall in socialism and the rise of ethnicity-based politics, which led to the rise of the right-wing. “In Bengal also, we are observing a shift towards ethnic identity politics, as the BJP has successfully brought together different communities under the larger Hindutva umbrella, particularly in North Bengal,” he said.

The BJP, along with the RSS, has established numerous shakas, Saraswati schools and other community outreach initiatives in the northern and western districts of the state – Alipurduar, Jalpaiguri, Cooch Behar and Uttar Dinajpur, Purulia, Jhargram, Bakura.

This is because these areas have large populations of SC/ST and OBC communities. The saffron party began focusing on the 13% of Hindu OBCs. A change in guard also took place in 2015, when little-know Dilip Ghosh (an OBC), who hails from the Jangamahal belt, replaced veteran Rahul Sinha. 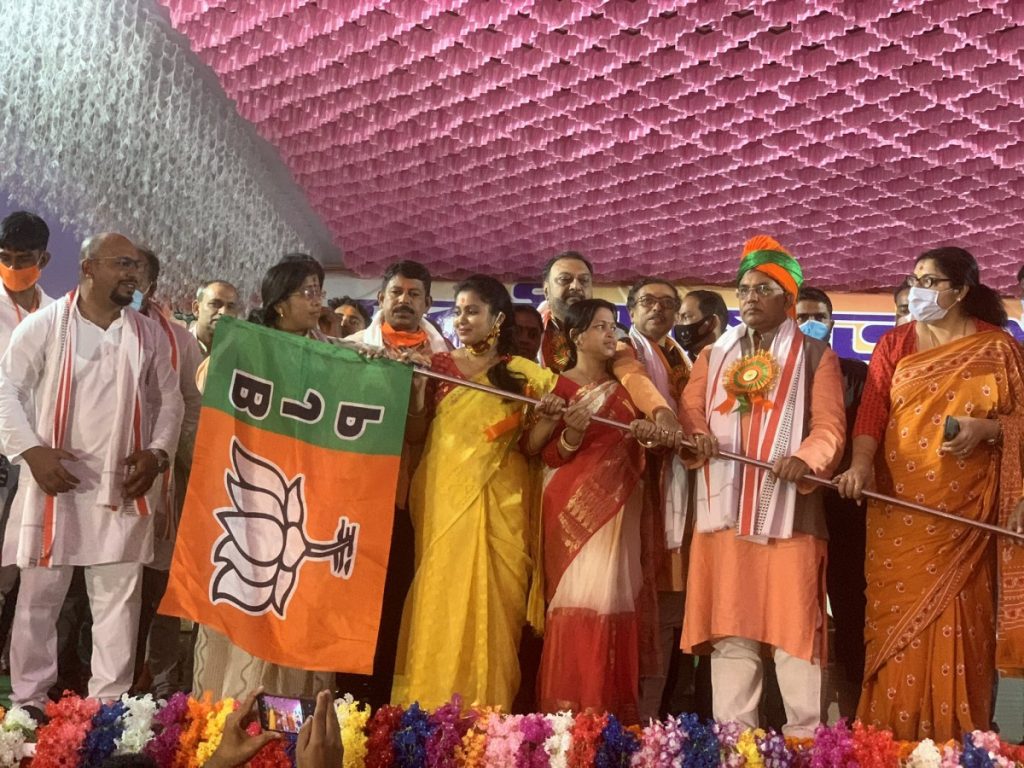 Not many have noticed that in the 2016 assembly election, the BJP gave nominations to SC/ST and OBC candidates, even in seats that were unreserved. Without any cadre or proper organigram, the saffron party still managed to secure 15-20% of the votes in the western and northern parts of the state.

Political researcher Sajjan Kumar, who recently toured the poll-bound state, said, “Bengal is witnessing a new wave of subaltern assertion, using the instrument of Hindutva to push the narrative. But one needs to note that the seed of identity politics was sowed by Mamata Banerjee, but it has actually benefited the BJP now. This social churn has challenged the sanctity of the ‘party’, which was until now the central power structure.”

Later, armed with the controversial Citizenship Amendment Act (CAA), the BJP tried to consolidate the Dalit refugee vote bank. The idea of offering citizenship based on religious identity yielded huge dividends for the BJP in West Bengal in the 2019 Lok Sabha election.

The saffron party bagged 18 of the 42 seats and clocked over 41% of the vote share. That election propelled the BJP as the principal challenger to the TMC.

“With the BJP playing a larger role in Bengal, an intrusion of the Gangetic imagination of politics is bound to happen. Mamata for the moment seems to be playing by the ear but it might be also politically useful to talk of cross-caste solidarities to mark the difference with the BJP,” said Gudavarthy.

After vigorously championing the contentious CAA and the proposed nationwide National Register Citizens (NRC), has put the issue on the back burner. However, on Thursday, visiting the Matua stronghold of Thakurnagar, Union home minister Amit Shah said, “As soon as the COVID-19 vaccination process ends, the process of granting citizenship under CAA will begin.”

This signals that the BJP will continue to give thrust to its brand of identity politics ahead of the elections.