Bengal: As Left and Congress Ally With Muslim Cleric’s Party, Will BJP Be the Winner?

Even as the Left and Congress have rejected claims that Abbas Siddiqui is a 'communal force, some within the alliance believe that his presence might ease the BJP's strategy to polarise Hindu voters. Kolkata: A huge banner put up on the dais of the Left and the Congress’s joint rally at Kolkata’s Brigade Parade ground, the venue for the state’s largest political gatherings over decades, had written on it: “Amrai Bikalpa. Amrai Dharmanirapeksha. Amrai Bhobishyat.” It meant, “We are the alternative. We are secular. And we are the future.”

On Saturday night, the eve of the historic first joint-rally of the Left and the Congress at this venue, a photo of the dais under preparation was shared on the Facebook page ‘Bharatiya Bigyan O Yuktibadi Samiti’ (Science and Rationalists’ Association of India), an organisation preaching atheism that has previously shown leftist bend of thought in its social media posts. In this post, the photo had the words “dharamnirapeksha” circled in red, accompanied by caustic comments ridiculing the claim of being secular.

The reason for this jibe from people belonging to the leftist school of thought is one and only – the two parties are on their way to sealing an electoral deal with the newly formed Indian Secular Front (ISF), initiated by Muslim cleric Abbas Siddiqui, who is also one of the prime speakers in the Brigade rally.

Though Siddiqui has named his organisation Indian Secular Front, it has earned the reputation of being a fundamentalist group, largely due to comments he made during the myriad religious speeches he has delivered over the previous years and even the recent ones. He belongs to the popular pilgrimage site of Furfura Sharif.

Siddiqui was initially in talks with Asaduddin Owasi’s party, the Hyderabad-based All India Majlis Ittehad e Muslimeen, which has decided to enter the Bengal election foray, for an alliance. However, after the Left and the Congress reached out to him for tying up instead, Siddiqui seems to have dumped Owaisi and chosen his new allies. Siddiqui, popularly known among his followers as ‘Bhaijaan’, has been making news over the past several months with his speeches criticising the state’s Trinamool Congress (TMC) regime during his religious events. Apart from the crowd at and temperament of Abbas Siddiqui events, what has been drawing the attention of the media, including social media, was his hardly worded speeches targeting the Mamata Banerjee government for her alleged betrayal of the Muslim community, as well as the Other Backward Classes (OBCs).

Among some of his controversial comments were the one against the TMC’s Basirhat MP, the actor-turned political Nusrat Jahan, saying she earns money “by showing [her] body“. He had controversially said, following the New Delhi riots in 2020, that Allah should send a virus to India so that crores could die; it did not matter even if he himself died. Siddiqui later said his speech was used out of context but tendered an apology nevertheless.

While forming the party, he included representatives of the Dalit and tribal communities. He seems to enjoy considerable popularity in parts of south Bengal districts such as South 24-Parganas, North 24-Parganas, Hooghly, Howrah, Burdwan and Birbhum. His brother, Naushad, is the chairman of ISF and Simal Soren, a member of a tribal community, is the president.

The Left has, over the past few months, repeatedly said that they did not consider Siddiqui to be a communal force. “He is raising the issues of the common people, the poor masses, not the issues of any particular community,” the CPI(M) state secretary Surjya Kanta Mishra said in January. CPI(M) politburo member Md Salim, echoed the same.

“Spreading misinformation about the ISF is part of a well-thought-out conspiracy being played out over the past four months. The hand-outs to the media came from the office of the RSS (Rashtriya Swayamsevak Sangh). The party is named Indian Secular Front. Its president is Simal Soren. We have agreed to leave some seats for them, we have asked our partners to give some seats to this new political force. We have also asked ISF to come to an understanding with the Congress. A section of the media is playing a deliberate role to ensure the alliance does not take shape,” Salim said in February.

Over February, leaders from the CPI(M) and the Congress have held several rounds of discussions with Siddiqui to come to a seat-sharing agreement. Siddiqui has been trying to seal a hard bargain, demanding about 30 of the state’s 294 assembly seats. The Left is trying hard to convince the Congress and the ISF to come to a reasonable settlement. The ISF has even demanded from the Left the Nandigram seat in East Midnapore district, where chief minister Mamata Banerjee has decided to contest against the BJP’s probable candidate, outgoing MLA Suvendu Adhikari. There is a possibility that the Left may agree to allot Nandigram to the ISF.

But the Left and the Congress’s moves have seen myriad reactions, as it appears to a section of people that the BJP would be the biggest gainer from such a deal.

The BJP, indeed, has been quite happy with the developments around Siddiqui.

“It would have benefited us even if Siddiqui struck a deal with the AIMIM. It would have not only split Mamata’s Muslim vote bank but also helped us polarise the Hindus against the rise of Muslim fundamentalism. Now that Siddiqui has found a bigger patron than Owaisi, it should be even better for us. If all the parties are appeasing Muslim fundamentalists, who other than us can protect the Hindus?” asked a BJP Lok Sabha MP who did not want to be named.

According to filmmaker Aniket Chattopadhyay, who is part of a civil society initiative called ‘Bengal against Fascist BJP-RSS’ that is campaigning with the slogan of “no vote to BJP”, the Left and the Congress’s attempt has been aimed at weakening Mamata Banerjee’s Muslim support base, but it would also help the BJP in a different way. 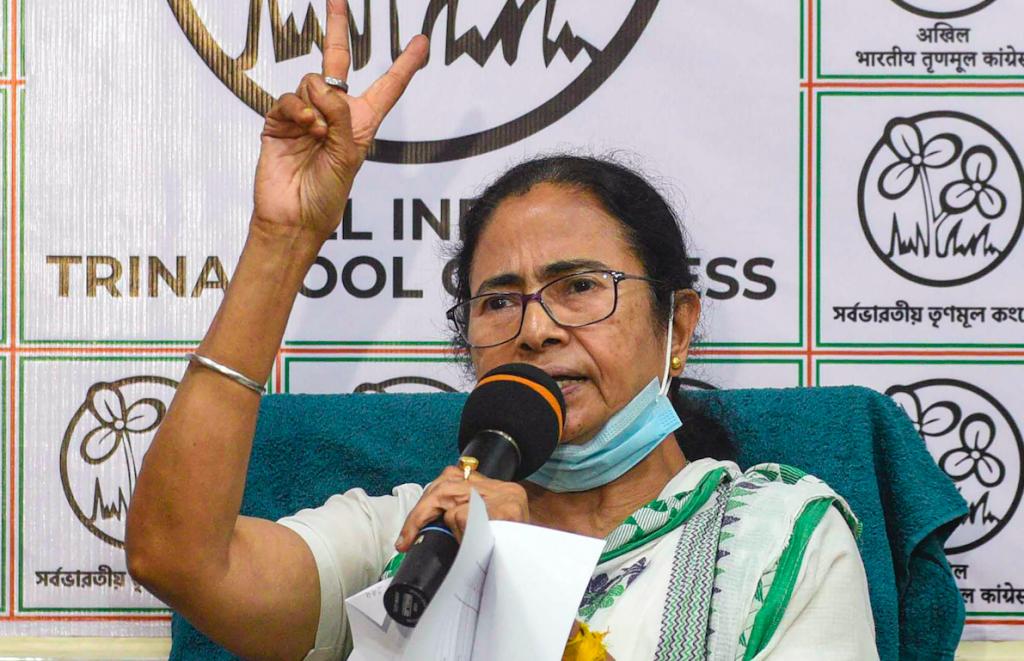 “The Left has damaged its secular credentials. It will help the BJP’s narrative of Muslim appeasement by other parties. Siddiqui has made too many regressive and controversial comments in the past not to be considered a fundamentalist and communal force,” Chattopadhyay said.

Political analyst Sabyasachi Basu Ray Chaudhuri, a professor of political science at Rabindra Bharati University (RBU) in Kolkata, felt that even if the Left-Congress-ISF alliance fail to significantly damage the TMC’s support base among the Muslim community, the alliance would help the BJP’s purpose of Hindu polarisation.

“Abbas Siddiqui’s many comments in the past had triggered controversies, leading to many calling him a fundamentalist force. The alliance is likely to dent the Left’s secular credentials in the public mind and may shepherd anti-TMC Hindu votes towards the BJP,” Basu Ray Chaudhuri said.

Theatre activist Joyraj Bhattacharya, who is supporting the alliance and has created cultural content for Sunday’s Brigade Parade Ground rally, disagrees. “There can, of course, be political opposition about Siddiqui but things that are being said referring to ‘Abbas Bhaijaan’ are not against him alone but against a whole community. This is against the Muslim identity. Until a few weeks ago, this was the rhetoric of the saffron bigots. They used to call Mamata Banerjee as Mamata Begum,” Bhattacharya wrote on Facebook.

“This is purely anti-Muslim cultural propaganda that the Sangh parivar has managed to spread with such force that the Hindu middle-class liberals are doing the rest now,” he added.

Another senior CPI(M) leader, who did not want to be named, argued that bringing Siddiqui out of an alliance with the ‘communal AIMIM’ was a necessary task keeping Bengal’s political future in mind. “If we stood bystanders while AIMIM created its grounds in Bengal keeping Siddiqui in front, it would have been a political blunder.”

Over the past few months, several Muslim leaders from the TMC’s ranks have termed Siddiqui as a communal and fundamentalist force, while Siddiqui also faced heckling by TMC supporters at some places.

“The Left, the Congress, the BJP and these so-called protectors of Muslim interest are working together to topple of Mamata Banerjee government and usher in a rule of the BJP,” alleged state library minister Siddiqullah Chowdhury, who also heads the Bengal chapter of Jamiat Ulama e Hind, a pan-India organisation of Muslim scholars and clerics.

The BJP, predictably, has lashed out at the Left and the Congress. “What the Left has done is unpardonable. They have created space for a fundamentalist and regressive force in mainstream politics. This is similar to the Left’s role in 1946 of aligning with the Muslim League. The Left and Congress have now even surpassed the TMC in playing divisive politics,” said Rantidev Sengupta, the editor of the RSS’ Bengali organ, Swastika, and the chief of Bengal BJP’s intellectual cell.

Sengupta, however, denied the BJP was planning to polarise the Hindus. “We are not dividing people. We want to free Bengal from corruption, lack of democracy and the politics of appeasement. We want development for all. The TMC, the Left and the Congress are dividing the people in the name of community and they all lie exposed,” he said.

On social media, references to 1946 – a year remembered for pre-Partition communal violence – is gaining prominence.

Another senior BJP leader, who did not want to be identified, said, “We were worried that a revived Left-Congress alliance could manage to take back some of their traditional votes that came to us in the 2019 Lok Sabha elections. Now we are hopeful Hindu Left supporters who voted for us would not go back to the Left.” 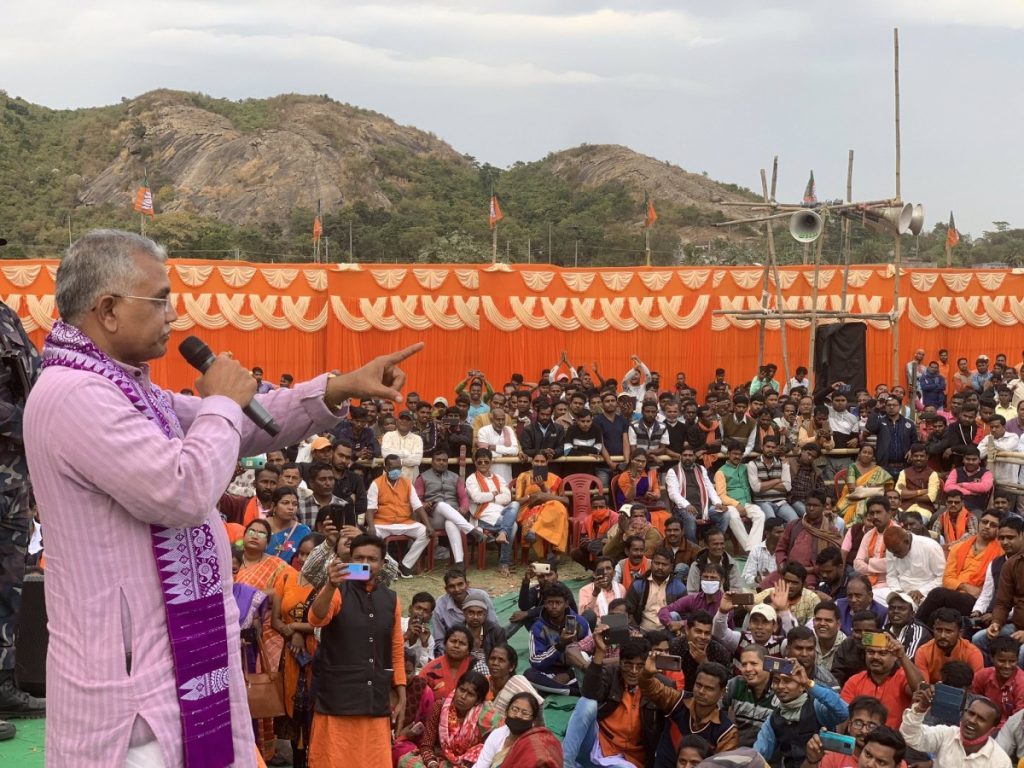 Going by the booth-level analysis of the 2019 Lok Sabha elections in which the Left’s vote share came down from 29% (in 2014) to 7%, the Left’s traditional votes in Hindu-dominated areas went to the BJP. But in Muslim-dominated areas, they went to the TMC. The Left got negligible Muslim votes in most parts of the state, except for some pockets in Uttar Dinajpur, Malda and Murshidabad.

Siddiqui, nevertheless, did not get support from all sections of Furfura Sharif, which has traditionally held some influence over Muslim society over the past years. His uncle, Tawha Siddiqui, so-long the most known cleric from this pilgrimage site, stands by the TMC. A majority of the state’s Muslim social leaders, too, appear to be standing by Mamata Banerjee’s party.

In Bengal, where Muslims constituted 27% of the population in 2011, the share of their votes play a crucial role in forming the government and Mamata Banerjee’s party is quite heavily dependent on the consolidation of Muslim votes in its favour. While so far its main challenge was to win over the Muslim votes from the Left and the Congress in the three Muslim-majority districts of Murshidabad, Malda and Uttar Dinajpur, the new political equation adds the challenge of retaining the Muslim votes they got in South 24-Parganas, North 24-Parganas, Birbhum, Howrah and Hooghly.

On Sunday, during the Brigade rally, Siddiqui certainly appeared as a star speaker. When he entered the venue, the Congress’s Lok Sabha leader and state unit president Adhir Ranjan Chowdhury was delivering his speech. Chowdhury had to stop his speech because of the cheer Siddiqui’s arrival triggered among the gathering. Left supporters, however, appeared in two minds about the prospect of joining hands with Siddiqui. While one section thought the firebrand cleric’s entry had added new energy and power to the third front, others were apprehensive that taking a religious leader to the front could hurt the sentiments of their Hindu supporters.