The Closer it Gets to the Elections, the Harder it Is Getting for the BJP in West Bengal

Despite recent defections, the BJP has not managed to get a credible, popular leader from the Trinamool Congress. 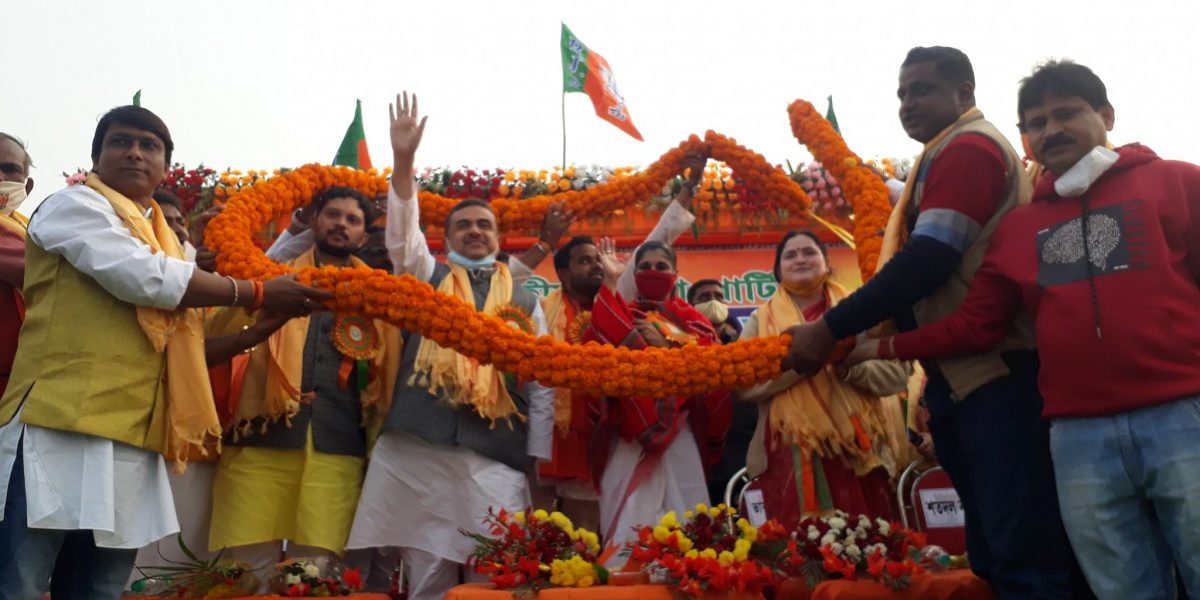 The fiercely competitive campaigns typical of West Bengal elections have been kicked off by a series of events. So far what we have seen were mere warm-up exercises.

Road shows, rallies and public consumption of village food (albeit minus the mandatory fish) by the Bharatiya Janata Party (BJP) as the challenger, and also by the Trinamool Congress (TMC) as the defender and the Congress- Communist Party of India Marxist led Left Front as a third, but not an alternative, force, are like hors ‘d oeuvre. The real fight has not as yet begun.

To make good on the vow publicly made by Amit Shah, as the irreplaceable master strategist of the BJP, at the December 19 defection of East Midnapore’s bhoomiputra, former TMC leader Suvendu Adhikari with much fanfare declared: “Didi, this is just the beginning. By the time elections come, you will be left all alone.” The party has thus set itself a target.

To do so, the BJP will need to organise mass scale defections that will irreparably damage the TMC on the one hand and immeasurably strengthen the BJP on the other.

That, however, is not why it is getting harder for the BJP to be a convincing challenger, firmly rooted in West Bengal, with an independent base and an embedded organisation with tentacles that reach into the deepest rural spaces in the state. The problem is, as a BJP veteran, who has struggled for decades to nurse the lotus, despairingly said: “How many of us are there anyway?”

The celebrity status immediately bestowed on Suvendu Adhikari, his Z-category security, his appointment as chairman of the Jute Corporation and the license to dispense with schedules carefully drawn up by the BJP is like only the icing on a cake, not the cake itself.

Similarly, the decorative appeal of Kolkata’s ex-mayor Sovan Deb Chatterjee and his friend Baishakhi Banerjee as mobilisers and organisers has forced the BJP to put up with tantrums, missed appearances and helpless embarrassment.

The induction of “leaders” in the campaign, like Uttar Pradesh deputy chief minister Keshav Maurya with OBC credentials, is a measure of just how hard the BJP is finding it to make the connect with West Bengal’s very different political culture and social dynamics.

To really make an impact, the BJP needs to be perceived as a shoo-in, which it is not, as yet. The local veterans acknowledge that there are gaps within the organisation, of people and experienced election managers at various levels. To cover the deficit, the party is angling to pick up “leaders with strong bases, mass appeal and a network of politically clued in workers” from other parties, principally the TMC. The problem is that the TMC networks and leaders have always worked with a loosely controlled leadership in a free for all milieu that is different from the BJP’s organised, disciplined and controlled management style.

The deficit of capable bhoomiputras nurtured and trained within the BJP-Sangh parivar is the crux of the matter. The difference in management culture between “us” versus “them”, old timers versus defectors, is a smaller problem. The real hazard is the number of “us” or old timers in the BJP in the first place; in absolute terms, the new entrants are small; but the BJP’s top leadership believes that they will help the party punch above its present political weight. It boils down to winnability. At the moment, the BJP in West Bengal simply does not have 294 candidates with winnability prospects.

In the perception battle, defectors can be a gamble and that too an incalculable one. Apart from the expected anxiety that the BJP is rapidly transforming itself into the TMC’s ‘B Team’, the “bahiragata” or outsider barb by Mamata Banerjee about the party gains credence with every defection mela, done with much fanfare by the BJP.

And, the absence of panic signals within the TMC, its decision to clip the Adhikari patriarch’s wings and bring arch rival Akhil Giri to the fore to manage a key district like East Medinipur, are messages that the voter is expected to read and understand; that the TMC has deep roots and alternative leaders, and that nobody is irreplaceable in the party.

On its part, the BJP is looking a tad impaired; its acquisitions from the TMC sometimes sulk and sometimes bargain and sometimes change the programme to suit themselves. The embarrassment of the organisers, including BJP’s West Bengal in charge and national general secretary Kailash Vijayvargia, recently when defectors threw a tantrum over BJP’s management changes for South Kolkata and then simply failed to show up for a rally was acute and desperate.

The exasperation was obvious; state party chief Dilip Ghosh’s dilemma spilt out: “We give enough opportunity to each leader to work for the party. Those who have come here to work for BJP will have to take a decision and start working. However, it is up to them to decide when they want to become.” If this was an exercise in ticking off recalcitrant defectors, it bombed.

BJP is looking a bit battered, with no option except grin and bear it. To take disciplinary action is impossible; the assets are considered valuable. Disciplining defectors could send them haring back to the apparently disorganised and disorderly Trinamool Congress. Not disciplining them makes the BJP a bit of a laughing stock. And, reining in temperamental defectors could discourage others from quitting the Trinamool Congress or any other party.

However, the BJP is an attractive proposition for the disaffected in the other political parties. It is also a means of fast tracking a slow moving political career, or jumping the queue to the front. The BJP’s declaration that its doors are open is like hanging up a ‘Help Wanted’ sign in a store front.

For the BJP, the West Bengal elections are a test that it must pass. The problem is that in its haste to win, it underestimated the obstacles that it is now beginning to encounter. From New Delhi, West Bengal possibly looked like low-hanging fruit. The party had done extraordinarily well in the 2019 Lok Sabha elections, picking up 18 seats and 40.3% of the votes.

Back in 2019 and up to December 20, 2020, the BJP was flogging the undocumented immigrants/’expanding Muslim tide’ issue and threatening that the Citizenship (Amendment) Act and the National Register of Citizens would be used for a long overdue communal cleansing of West Bengal and confirming citizenship on communally identified groups of Dalits and OBC forced to flee Bangladesh for reasons of religious persecution.

On December 20, the Union home minister sent implementation of the CAA and NRC into cold storage at a press meet in West Bengal. He also expunged the idea that had been broadcast by local BJP leaders abetted by insinuations by the governor, J.P. Dhankar, that the deteriorating law and order situation and partisan governance would invite drastic measures and the imposition of President’s Rule.

Having turned the 2021 election into a prestige fight, the BJP needs attractive political merchandise. The target of winning 200 seats out of 294 in the state assembly is tough.

Shah’s idea of taking over the TMC lock, stock and barrel minus Mamata Banerjee reveals the BJP’s own assessment, that it needs transfusions to help it reach its target. Why else would Shah want to take over the TMC? If he had suggested that the TMC would be reduced to a “sign board” as Banerjee had once famously declared the CPI(M) and the Congress would be, it would have made more sense.

The BJP needs a big win now. To restore the image of the party bruised and battered, it needs to pick up West Bengal, an opposition-ruled bastion and a historical political outlier. If West Bengal falls to the BJP, it would signal to the rest of India and the world at large that the BJP is indeed a national party.

The past several elections went awry for the party; in Bihar, it barely scraped up the majority to form a government, in Maharashtra it could not form a government because regional partners rejected it, and in Haryana it did not win but nevertheless formed the government. In Madhya Pradesh, it took defections to get the BJP back in the saddle; the attempt to unseat Ashok Gehlot in Rajasthan turned into a circus.

It lost the Delhi elections and it is facing incumbency issues on the one hand and a botched pandemic response on the other. The economy has contracted, growth is negative and none of its efforts to get the economy going have worked.

The Modi government is looking incapable at this point; after 50 days on the nation’s highways leading into Delhi, the farmers are a political challenge to the BJP.

Planning to win in West Bengal because of reasons that have nothing to do with the actual grassroots strength of the BJP in reality is a risky proposition, bordering on fantastic expectations. Its biggest headache is that the BJP has no ‘face’ in West Bengal. There is not a single appropriate bhadralok, the quintessential cosmopolitan sophisticate, or a local with national stature to represent the party.

The other problem for the BJP is its unfamiliarity with the cultural landscape of the state and its monumental pride in its bhoomiputra icons. A slight to even one is taken as a personal slight to a significantly large number of Bengalis; the apparently simple rural voter and the impatient urban youthful voter are equally touchy about their identity as Bengalis and their pride in their heritage, however it is constructed.

Any construction of Bengali heritage has to be based on its traditions of tolerance, unity in diversity and harmony, reflected in its politics. The closer it gets to the election the BJP is going to find it harder to crack the enigma of West Bengal politics.

The iron discipline of the Sangh parivar has prevented a public break out of disquiet about the party’s playbook for West Bengal. The disquiet could be of embarrassing proportions. The gulf separating the local organisation from the central party leadership may not affect the effort that is put in to fight for a win in the West Bengal elections. The apprehension is that the effort could be disproportionate to the outcome.