In the meantime, a section of Namashudras feel that Matuas are being disproportionately focused upon, leading to a vacuum when it comes to the larger community's demands. 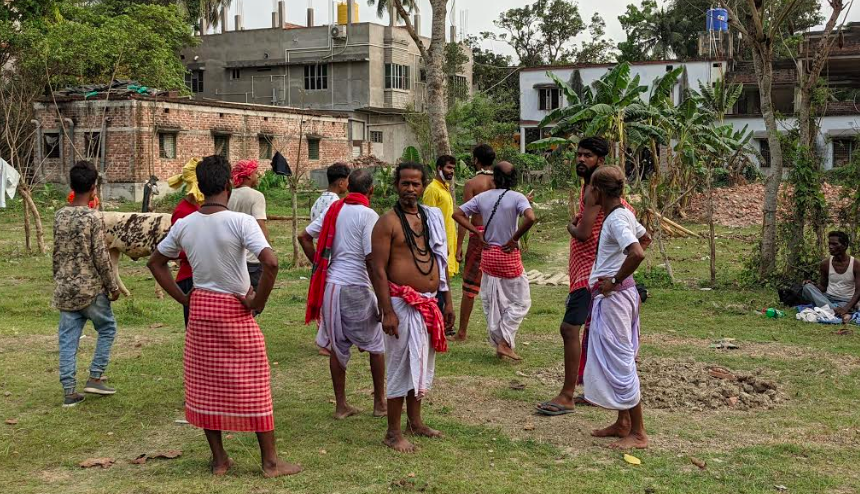 'Matuas have significant presence in four parliamentary seats in West Bengal, making them one of the biggest vote banks in the state.' Photo: Himadri Ghosh

Thakurbari: Deepak Das came to Thakurbari from Habra, on the eve of the birth centenary of Harichand Thakur, founder of a Hindu sect known as the Matuas. When asked about what he thought of the Bengal assembly election, Das simply smiled.

About 40 minutes later, when this reporter was interacting with a group of middle-aged people outside Thakurbari, Das came and stood quietly. After everyone had spoken, he said, “This time both the parties have a chance. It is not like the last election when everyone voted for one party.”

Thakurbari is the centre of Matuas, located in North 24 Parganas district’s Thakurnagar. Matuas are a closely-knit group in the state belonging to the Namashudra Dalit community, who migrated from Bangladesh during and after the Partition. They are part of the Scheduled Castes.

Matuas have significant presence in four parliamentary seats in West Bengal, making them one of the biggest vote banks in the state. Although no official count exists, it is estimated that there are about one crore Matua voters.

Assembly segments under Bongaon, in North 24 Parganas district, have a significant Matua population, however, it is not evenly spread. Bongaon will go to polls in the sixth phase, on April 22. 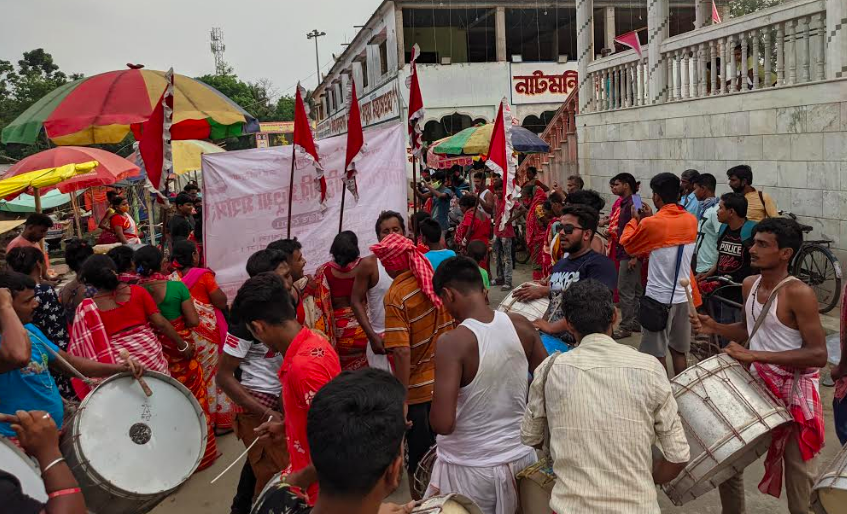 ‘Yes, there is some confusion over the citizenship issue, but BJP promised us and we believed them.’ Photo: Himadri Ghosh

Sunil Naskar, from Gaighata said, “We are confused about who to vote for this time. BJP promised us citizenship but couldn’t implement the Citizenship Amendment Act even after 18 months. If they can make laws for farmers, why can’t they make a law for CAA?”

Forty-nine-year-old Tarak Halder, a resident of Gangrapota gram panchayat of Bagdah assembly segment said, “We are with Thakurbari and [BJP Lok Sabha MP] Shantanu Thakur. It is because of Shantanu Thakur that the prime minister of this country came to Thakurbar and visited Orakandi [in Bangladesh]. No other PM has ever visited Orakandi. Yes, there is some confusion over the citizenship issue, but they (BJP) promised us and we believed them.”

Pritam Jana, a resident of Bagdah, also highlighted the perceived significance of Modi’s Orakandi visit. But Jana’s colleague, Mrinal Das called it “voting tactics”, saying that Modi had not gone to Orakandi in the last seven years.

On March 26, Prime Minister Narendra Modi visited Bangladesh for two days for the 50th anniversary of the Independence of Bangladesh, and pay homage to the country’s founding father, Sheikh Mujibur Rahman, on his birth centenary.

Modi’s stop at Orakandi, around 190 km from Dhaka, where he paid respects to Harichand Thakur, who was born there on March 11, 1812, made news. 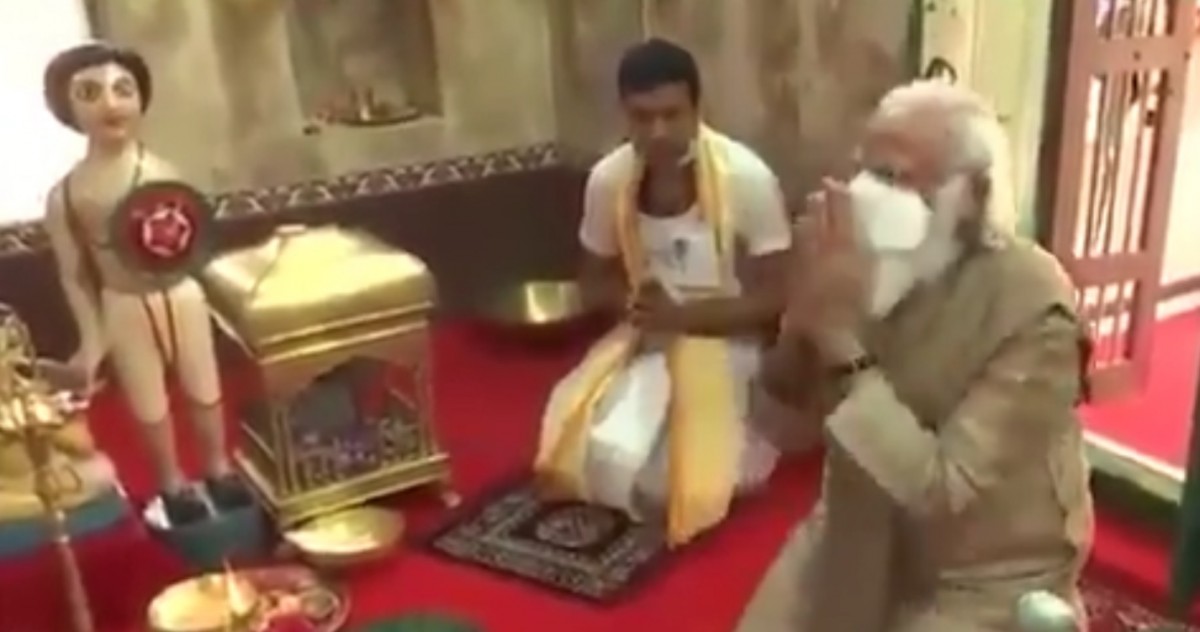 The issue of citizenship has been a long-standing demand for Matuas. The community protested against the Citizenship Amendment Act brought by the NDA government, led by Atal Bihari Vajpayee in 2003, which introduced the concept of ‘illegal migrants’ for the first time.

Nirmal Mondal said, “We want the kaala kanoon (black law) of 2003 to go. We want unconditional citizenship. BJP promised us in 2019, but they haven’t delivered. We won’t tolerate this duplicity.”

The promise of offering citizenship based on religious identity yielded results for the BJP in West Bengal in the 2019 Lok Sabha election. The saffron party won 18 of the 42 seats and 41% of the vote share in Bengal.

Matuas played a big role in BJP’s won from the seats of Bongaon and Ranaghat – which have the highest concentration of Matuas.

Sixteen months after the passage of the CAA in the parliament, the Centre is yet to frame rules and implement the law, which has seen widespread national protests.

Also read: CAA to Be Implemented, No Plans For NRC Exercise in Bengal: Kailash Vijayvargiya

Speaking at a rally in West Bengal on February 11, Union home minister Amit Shah said that implementation of the law had to be kept in abeyance ‘after the country was hit by the COVID-19 pandemic in 2020’.

“As soon as the COVID-19 vaccination process ends, the process of granting citizenship under the CAA will begin. All of you will be respected citizens of this country,” he said, addressing a rally in Thakurnagar, the bastion of the Matua community.

Biswajit Das a resident of Dharmapur 2 gram panchayat said, “Citizenship is the primary issue” even though he also felt that “Didi [Bengal chief minister Mamata Banerjee] has done development here.” 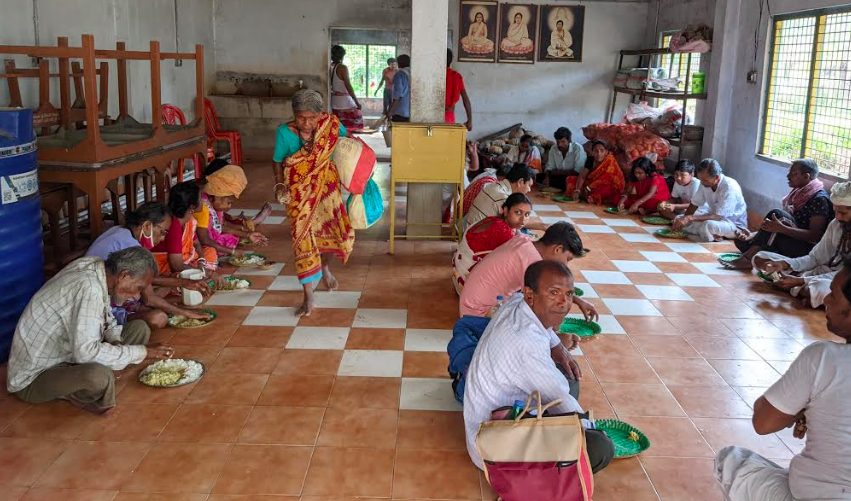 ‘BJP promised us new industries and jobs, so we will vote for a change’. Photo: Himadri Ghosh

Alok Mistry of Petrapole village’s Namopara, about a kilometre off the India-Bangladesh border of Bongaon Uttar assembly constituency, complains about unemployment in the region. “We have no jobs, no houses. BJP promised us new industries and jobs, so we will vote for a change,” said Mistry. Namopara is mainly occupied by Namashudras.

When asked about the citizenship issue, Rina Dalui of Kotulpukur in Gaighata assembly brushes away its significance. “Are we not citizens? If not, then how do we vote, how do we have Aadhaar cards and ration cards? We don’t believe in the CAA, we are all citizens as Didi has said. No one has asked us to leave this country.”

Birat Bairagya, a Matua, who completed his PhD on the community, said, “We want unconditional citizenship, nothing less. I even filed an RTI to get more information on the CAA. It appears that the Centre wants to give citizenship based on persecution. How will I prove that I was persecuted? We won’t accept the refugee tag. BJP got overwhelming support from the Matua community in 2019 because of this promise. The RTI has revealed their double standard.”

Sixty-five-year-old Bairagya was the former working president of the Matua Mahasangha – apex body of the sect – and has also been close to Thakurbari. Bairagya, along with a few other intellectuals from the community have formed the Nagorikotto Surkaha Mancha (Citizenship Safeguard Committee), which is campaigning against the ‘double standard of BJP government on CAA’. The committee, over a period of 65 days, has organised over 50 street corner meetings in Matua-dominated areas, along with door-to-door campaigns.

“We are telling people that CAA, in the current form, doesn’t help anyone and urging people to remember this while voting,” Bairagya said. 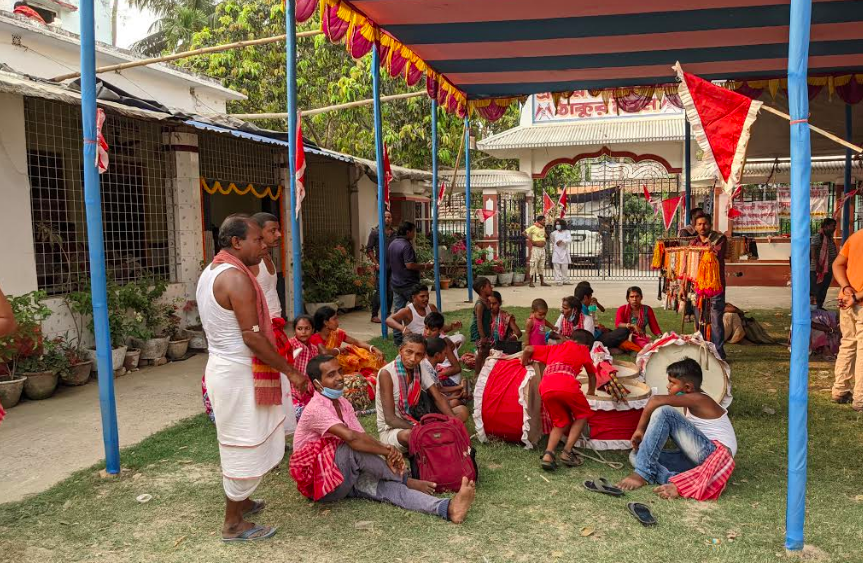 ‘The media and government only cares about Matuas. Modi visits Bangladesh for Matua votes and does nothing for us.’ Photo: Himadri Ghosh

He feels that BJP might be in for a lower tally from the community than what it got in 2019, and that people should focus on the university set up in 2018 by Banerjee’s government, named after Harichand Thakur and Guruchand Thakur.

The Wire observed that a section of Namashudra people feel BJP has been wrong to focus solely on Matuas.

Pintu Ghorai, for one, spoke about a spate of civic issues in Ramchandrapur Uday gram panchayat of Swarupnagar assembly constituency. When asked if he is a Matua, Ghorai got visibly angry.

“The media and government only cares about Matuas. Modi visits Bangladesh for Matua votes and does nothing for us. If we don’t vote for BJP, can they manage only with Matuas?” he asked

Ghorai sentiment echoed in Debdulal Mondal’s at Habra’s Pritibha gram panchayat. Mondal, who works as a daily labour, said, “Too much importance has been given to the Matuas, as if nobody else exists.”  Mondal said he will vote for Mamata Banerjee, who he believes has “done work” as opposed to “Modi, who has only given false promises.”

Monotosh Adhikar, a school teacher said, “Of late there is a sentiment against the BJP in the Namashundra community. I have personally witnessed this, but I can’t say how deep it is.