Riding on Tireless Relief Work, the Left Charts a Return to Bengal's Radar

In a state affected by a cyclone and a health crisis, the CPI(M) and other Left parties have climbed up several notches on the popularity scale thanks to their relief work. Kolkata: Khejuri village in West Bengal’s East Midnapore has been witness to a symbolic political epoch in the last few weeks.

This village was at the heart of the Nandigram agitation to protest land acquisition for a special economic zone in 2007, which was one of the factors that led to the fall of the Left Front government in the state in 2011. Since then, leaders of the Communist Party of India (Marxist) have had to stay away from the village.

But the hardships of the lockdown implemented to combat COVID-19 and the destruction caused by cyclone Amphan ensured a change of heart for the people in the village for the party as its cadres and volunteers rushed in to help with basics like soap, food grains, cooked food and tarpaulin for people whose homes were destroyed.

Though this return may only be of symbolic significance, in the last few months, the CPI(M) has held rallies, conducted volunteer work and other activities in different parts of East and West Midnapore, in areas which had been difficult to access for them for over 10 years.

CPI(M) leader Tapas Sinha, who contested the Assembly election from east Midnapore’s Ramnagar in 2016 says that they have been able to function from party offices once again in areas like Nandigram, Khejuri, Garbeta and Keshpur. They had not been able to open them earlier for fear of violence. 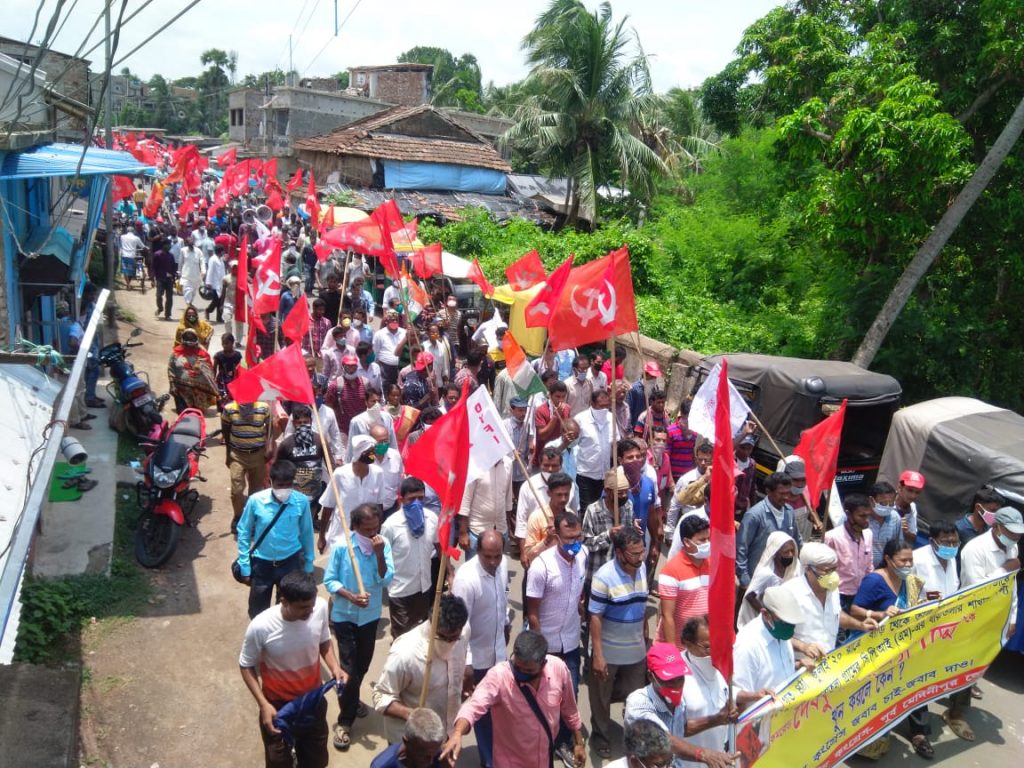 “We opened a few offices during the previous [2016 Bengal Assembly] elections and after the Lok Sabha election [2019] but this time we are getting overwhelming support from the local people,” he says.

Not just in Midnapore, community kitchens during the lockdown, sustained relief work after cyclone Amphan, their efforts in reaching out to migrant workers in different states and even the noise around the Kerala model to combat COVID-19 has resurrected the Left as a force to consider in West Bengal politics. This is quite the feat considering the near oblivion it had been sinking into after the 2019 Lok Sabha election with zero seats and only 6.34% of the vote share.

Senior CPM leader and politburo member Mohammad Salim credits the quick reaction of the party to the lockdown and necessity of relief to the tradition of the left political movement in the state and a culture of sharing. “Despite being on fertile land, Bengal used to be prone to crisis and famine. From the very beginning of their journey in the state, communist parties have acted on issues of food and health. That is why the Left in Bengal rose through the food movement in the 1960s. Even during the Bengal
famine in the middle of World War II, the Communist party formed many voluntary groups and many people who were not from the party – intellectuals, democrats, apolitical groups– joined in support,” says Salim.

This time, the Left-organised relief initiatives did find contributors and volunteers from outside the party fold. Professionals, students and local businessmen joined in. Most said that they did not see it as a party activity. In Hooghly district’s Konnagar town, seven community kitchens were running till early July where over 30,000 people came daily for food, according to
Left activists.

The scale of this activity encouraged Mithua Chakraborty, a 38-year-old school teacher, to join them. “I have little to do with politics. I just saw young college going boys and girls working all day and night for relief after the cyclone and thought I should join them too. There are people from my locality who support other parties but they too joined in to help,” says Chakraborty.

Non-political organisations that do not align with the CPI(M)’s politics, NGOs and other bodies also joined hands in large scale relief work in cities and villages.

“These other initiatives have done commendable work too. We have worked in co-operation with apolitical organisations. Initially, we took care not to use party flags to get people to join freely and contribute,” says Salim.

But will this new found connection with the people reflect in the 2021 Assembly elections?

Also read: Trinamool Must Check Its Own Intolerance to Counter the Rise of BJP in Bengal

The ruling Trinamul Congress (TMC) has a humungous task on its hands of managing the economic and healthcare challenges of COVID-19 and provide relief to those affected by the cyclone which according to the state government has caused damage of over Rs 1 lakh crore.

With the BJP emerging as a strong contender in the 2019 Lok Sabha with nearly half the seats, its position as the unchallengeable power has already weakened. Now with multiple allegations of corruption and mishandling of relief funds, with the party expelling over 200 members for corruption in cyclone relief work earlier this month, its ground is shaky.

“There is a lack of confidence in the government and a strong anti-incumbency. But it is unlikely that this will favour the CPI(M),” says Rohit Basu, political commentator and associate editor of Bengali newspaper Uttarbanga Sangbad.

Basu explains that though the Left has gained in acceptance in the last few months, it is yet to position itself as a likely winner in the state. “And that becomes a crucial factor in how people vote.”

As far as a chance to win is concerned, observers in Bengal are not putting their bets on the CPI(M). Some like Omprakash Mishra, professor of International Relations at Jadavpur University, who was also a senior Congress leader and is now with the Trinamul, do not see the Left as an alternative in the state. Mishra sees many Left-minded people voting for the Trinamul to keep BJP at bay.

“For many such people in the state who organised such relief activity or even participated in it, BJP still remains the ideological
and philosophical opponent. They have problems with the Trinamul Congress too, but do not question the ideological moorings of TMC. The Left’s competition with the TMC is on aspects of governance and administration, like violence, corruption, nepotism. This competition is within the framework of constitutional democracy and does not negate the essence of Indian pluralism. With BJP, it’s an ideological challenge and not a mere political competition. So even these people end up voting for the Trinamul Congress,” says Mishra.

CPI(M) leaders, however, assert that their relief work or community support is taken up for more than just votes. “We have tried and helped people in as many states as possible. In many states we are not even contesting,” says veteran CPI(M) leader Rabin Deb.

Deb, however, claims that the party has got a strong momentum from the work. “Many young boys and girls have come forward to participate. Some of these are absolutely new faces and some are from traditionally Left families whose children had somehow been removed from politics because of their jobs or because they were not interested. We saw them handling contributions and managing kitchens with a lot of energy. This, along with our movements for employment and economic security during this crisis has definitely created the base for a social Left again,” he says.