In Kolkata’s Reaction to a Theatre Actor Joining BJP, a Glimpse of an Age-Old Tussle

Actor Koushik Kar's joining of BJP and his removal from a play afterwards reflects a lot more than just Leftist dominance in Kolkata's culture scene. 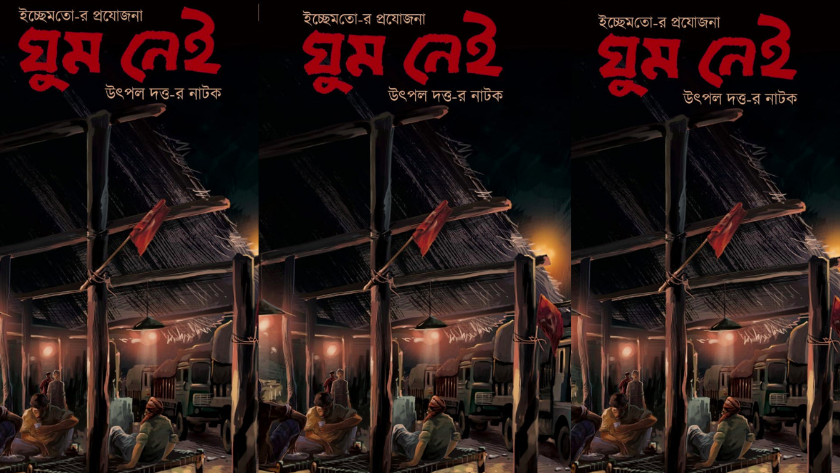 The poster of the play 'Ghoom nei' from which an actor was dropped because he joined BJP.

Kolkata: On March 9, director Saurav Palodhi dropped his friend and collaborator Koushik Kar from his play with a Facebook status update that made the reason clear – Kar had joined the Bharatiya Janata Party.

Kar is as close to theatre royalty as possible in Bengal. His odd passion and gritty acting has made for some of the biggest plays in recent years. Earlier this month, he went to the Hastings office of the BJP and formally joined the party in state president Dilip Ghosh’s presence.

Palodhi wrote a short and fierce update at the end of which he said, “Chol phot.” In Bangla, the words are gangster-speak for ‘get out of here’.

In this pre-poll landscape, several performers — folk, stage, small and big screen — have joined political parties. Many artistes have given interviews to local press on their move; most of them have said they have no plans to leave performance after joining politics.

While Kar is perhaps the only Bengal star in 2021 to have lost work because he has joined a political party, his name has not appeared in the BJP’s candidates’ list yet.

Kar’s move has also been shorn of the mirth and curiosity that has usually accompanied the appearance of sudden headlines on film stars who had never been active political participants suddenly joining BJP or TMC. Media reports and news channel discussions focused on whether his removal from a play over a personal choice was ethical, but bigger issues took over prime time in a matter of days.

‘How can a BJP member play Akhlaq?’

Palodhi is a vocal and visible supporter of the Left, and for many, his decision to fire Kar reflected an intolerant political institution which holds inordinate sway over Bengal’s cultural life even now. 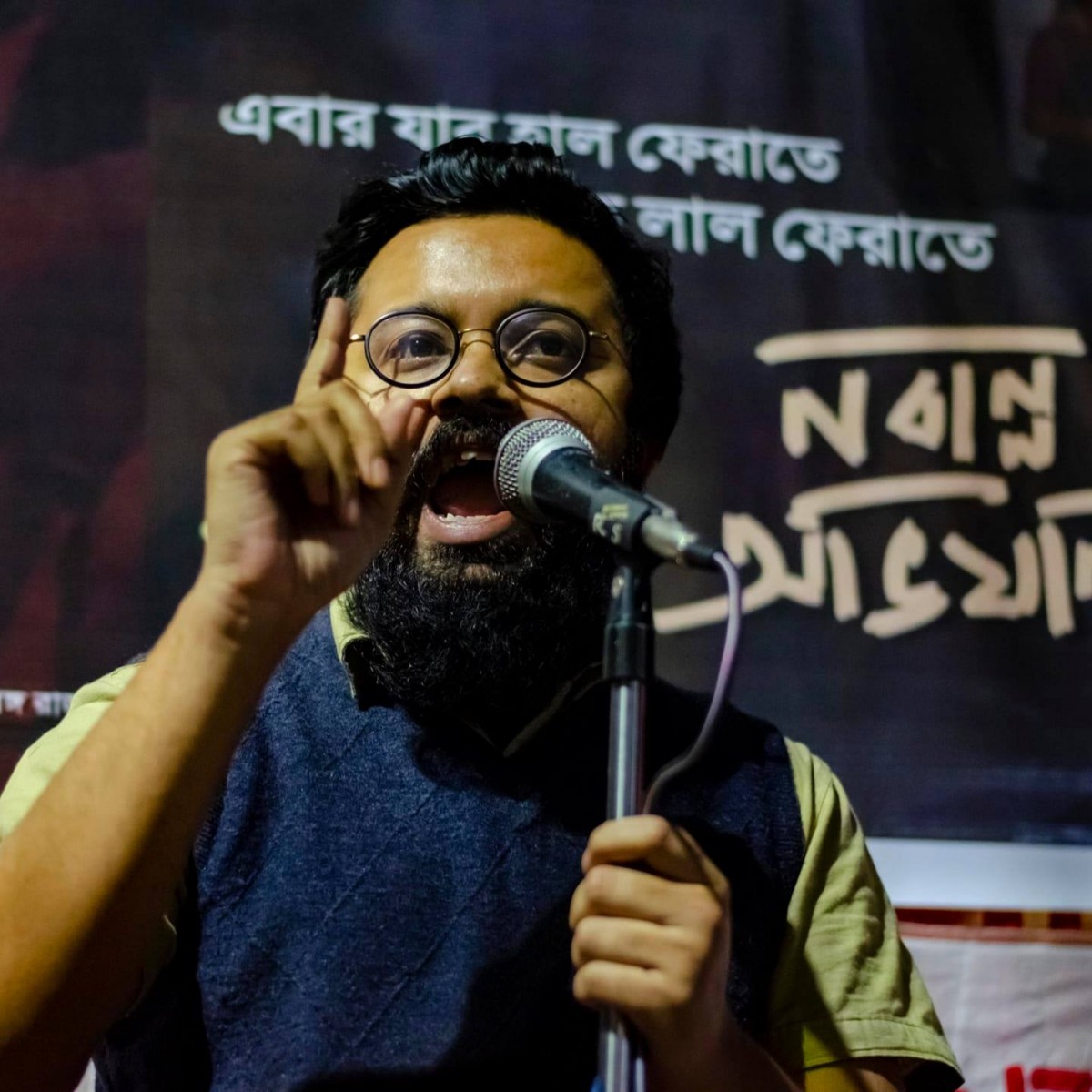 Propelled to fame by a hit reality comedy show on a Bangla channel, Palodhi now runs a comparatively new theatre group called ‘Ichhemoto’ with his partner, the actor Turna Das.

Countering all criticism that he has received for dropping Kar abruptly, Palodhi upholds ideology.

“The play from which I removed him was Utpal Dutt’s 1970 play Ghoom nei (‘Sleepless’). He and I sat together and re-fashioned the character of the farm labourer Bhabani into a man named ‘Akhlaq’. The reference was to Mohammad Akhlaq, the beef lynching victim. How can a man who has joined the party that made this atrocity possible, be bringing Akhlaq to life?” Palodhi asks.

He believes Kar has set a bad example for coming generations which look up to people like them.

“Theatre has been and will be anti-establishment. It will go on irrespective of who comes to power, but I will be very happy if I discover that Koushik joined BJP because he was threatened or otherwise compelled. And not of his own volition. A person like him cannot ‘turn’ so suddenly,” he says.

Koushik Kar, in his late thirties, says he has moved 32 times in his life, across six districts, as he and his mother attempted to eke out a livelihood. 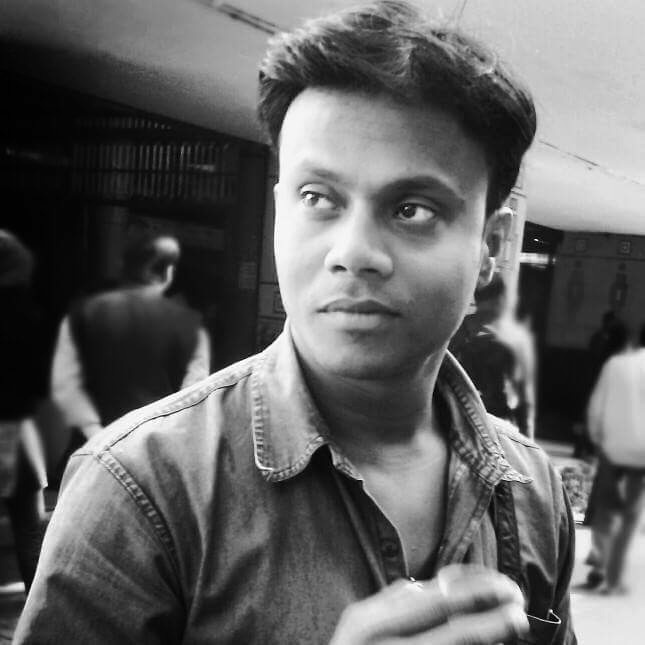 When in 2008, the Buddhadeb Bhattacharjee government attempted to set up a repertory under the iconic, century-old Minerva Theatre, Kar auditioned and was chosen to be among the 20 actors. In an arena forever encumbered by financial woes, productions by the Minerva Repertory arrived as an exception.

They led to sold out shows and guest stars like the late Soumitra Chatterjee. Additionally, the troop comprised talented actors who have known struggle, many of whom were from small towns at some distance from Kolkata. Nearly all of them are now established names.

In 2011, the government in Bengal changed. The repertory’s celebrated play Raja Lear ran into trouble with the TMC government, which had said it was expensive and threatened to stop it. In 2013, a notice was hung on the large doors of the theatre. “The repertory is disbanded. New auditions will be held for it again,” it said.

One by one, the actors, including Kar, were forced to hand in their resignations. One of them, Adhikari Kousik, sat on a dharna under the awnings of the old building with a piece of black cloth across his mouth. That protest yielded no results. It was Adhikari Koushik who led Kar to BJP. Theatre actor Adhikari Kausik during a 2013 sit-in, against the dissolution of the Minerva Repertory. Photo: By arrangement

“I have been rallying against the Left and the Trinamool for 15 years now. The Left has made theatre its own personal domain, purely for propaganda purposes. But I have travelled far and wide with theatre and let me tell you, people who do ‘Leftist’ theatre from big cities have no grassroots connect. Marx was born in the 18th century, but Bharat’s Natyashastra was written when? Years ago. The Left cannot dictate what theatre is,” Adhikari Kousik says.

He was present when Kar joined BJP. Their colleague Sayantan Nath also joined on the same day.

The dissolution of the Repertory, which propelled them into greater struggle and eventual prominence, is testament to the power politics holds over both Koushiks’ professional lives.

In their political action now, there is also a glimpse of the old anger against the elitism of Kolkata’s cultural and political world.

For years, the rest of Bengal (especially its youth) have alleged that the tone and development of Bengal is dictated by Kolkata alone. While Mamata Banerjee promised a move away from this city-centric branding of the state, she has not quite succeeded. A WhatsApp forward circulated after she sustained her recent injuries made light of the fact that Banerjee decided to proceed to the SSKM Hospital in Kolkata and not to the Nandigram Super Specialty Hospital which was closer to the site where she was hurt. So little is the faith in anything non-Kolkata.

The ‘Kolkata versus Bengal’ line – which BJP leaves no opportunity to bring up – also came up last year in the aftermath of Cyclone Amphan, when residents of Hooghly, the two Medinipurs and the two 24 Parganas districts noted that for once Kolkata was suffering from power cuts as sustained as they were accustomed to.

‘Che Guevara as a brand’

Both Koushik Kar and Adhikari Kaushik individually tell The Wire that Palodhi’s brand of theatre pales in comparison to “real” theatre that is seen elsewhere in Bengal. But both agree that this theatre too is largely done by young men and women who are avowed Leftists.

Kar is willing to make an exception for them and their idealism. “But not for people like Palodhi, who see Che Guevara as a brand. The channel that propelled Palodhi to fame…which funded the foundation of his career…who owns it? Does he not know?” Kar asks.

Palodhi’s show aired on the regional Zee channel, owned by BJP-backed Rajya Sabha MP Subhash Chandra, and whose news outlets are largely held to be sympathetic to the Modi government.

Kar’s perceptive question on media and allegiance, in fact, acts as a remarkable moment of truth for his own political awareness — which perhaps betrays his new devotion to BJP.

As one who played ‘Akhlaq’, how does he reconcile the alienation of Muslims, the CAA, and the threat of communalism that BJP brings? “A lot of this talk on communalism is imposed on the BJP,” Kar says. He claims he has always been equidistant from the Left and the TMC and now BJP has appeared to him a viable alternative. A social media announcement of Kar winning the Mahinda Excellence in Theatre Award for essaying Akhlaq in Ghoom nei, shared by Palodhi in August 2020. Photo: Facebook/saurav.palodhi.9

In the faith Kar has chosen to publicly put in BJP, we see the lingering question as to whether in order to do anything or hit any new high, a performer needs to sign in with a force they deem is the most powerful.

Kar’s onetime colleague in the Repertory, Ankita Majhi, says that his timing may well lead people to allege opportunism. “It comes just before the election, just when so many of us wish to prevent a communal force from taking over Bengal. Otherwise he is of course free to join whichever party he wants to, although from the political awareness we knew he had, he seems the last person to want to join BJP,” she says.

She cites how she is a supporter of the Left but has worked with theatre director and Trinamool Congress state minister Bratya Basu. “We’ve all had to do what we can, theatre isn’t an easy livelihood,” she says.

Then came the last year — which saw all of them out of work and out of income. Majhi says she knows many fellow actors who took to selling vegetables to get by.

Actor Indrasish Roy, who works in both films and theatre, says Kar’s move is not surprising considering the horrors of last year. “We are all sitting at home, without work,” he says.

Kar brushes away indication that he moved to BJP for financial security. “I worked until the last day before the lockdown and began work the day after the Unlock was announced,” he says, adding that he joined the party to work for people, not for gains.

Kar, did, however, lose a part of his income after being removed from the play. But Palodhi says that it is not like Kar ever did theatre to make great money. “We do theatre for ideology, it’s not something that makes money,” he says.

Kar adds that since his BJP move became known, the late writer Nabarun Bhattacharya’s son has also withdrawn permission to him for staging the play Auto, based partially on Nabarun’s work. The play has been running since 2018. “So that’s another play gone,” he laughs. When TV and cinema stars have not been on the receiving end of an ideology trial, whether Kar is alone in being held to an unfair standard is a question.

Citing Bratya Basu’s example as a Left-leaning director of the group ‘Ganakrishti’, who later joined TMC and founded the breakaway group ‘Bratyojon’, Ananda Lal who retired as a professor of literature and theatre from Jadavpur University, says a lot of people who have done theatre have proven to be ideologically fluid.

Lal adds that theatre has not always been a career choice steeped in anti-establishment behaviour either.

When the Left Front formed the government in Bengal, for instance, communist artistes found themselves believers in a maxim which the establishment itself claimed to follow.

“Utpal Dutta himself was a supporter of the CPI and then the CPI(M), with a brief stint with the Naxals. His 1972 play Barricade was called ‘counter-revolutionary’ by the very Left he supported,” Lal says.

Kar is firm that like Dutta, he will go on working irrespective of who comes to power. “I do not care about Leftists who haven’t seen the world beyond this city. Like Godard says, ‘They are children of Marx and Coca Cola’.”