West Bengal: The Dilemma That Left-Leaning Voters Are Facing in This Election

Opinion polls suggest the possibility of a Left-alliance majority is remote. As the polls also predict a close finish between the TMC and BJP, which way Left-leaning voters go may have an impact on the outcome of this election. 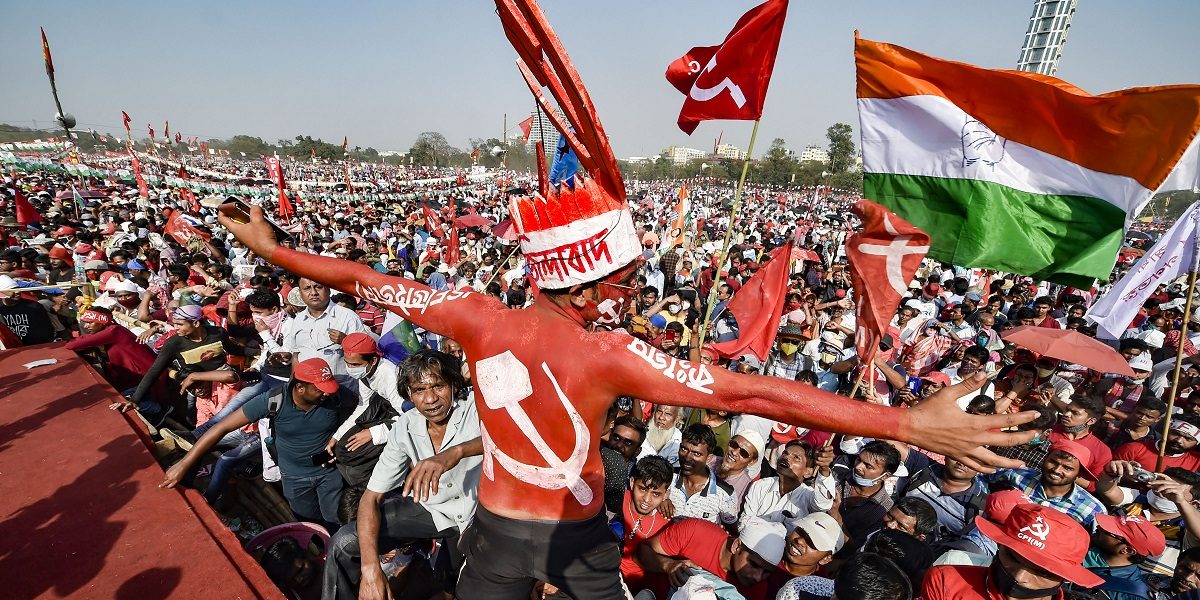 With the first and second phases of voting completed, the West Bengal assembly elections have generated widespread interest. The Trinamool Congress led by Mamata Banerjee has been in power for a decade. Issues of unemployment, allegations of corruption and strong-arm tactics have created a palpable anti-incumbency factor, even though some of the schemes carried out by the government, such as Kanyashree and Swasthya Sathi, have created a loyal voter base, especially among women.

At the same time, West Bengal is high on the Bharatiya Janata Party (BJP)’s list of electoral prizes – if a traditional Left bastion turns saffron, that will reverberate nationally. Identity politics in terms of religion and caste, generally not a salient issue in West Bengal elections, is clearly playing a role in voter polarisation. But regional identity – ‘Bengali pride’ and ‘locals versus outsiders’ – is also in the mix.

For a state that does not show the kind of regular anti-incumbency cycle that one is used to seeing in Kerala – another state with a long history of Left rule – there is a strong sense of uncertainty about whether the ruling TMC will be elected for another term. The Left parties and the Congress, traditional rivals, are now part of an alliance in West Bengal, and they have launched an energetic campaign focusing on economic issues. Opinion polls, for whatever they are worth in terms of predictive power, are giving either the TMC or the BJP a narrow edge and predicting a hung assembly.

Judging by these polls, the possibility of a Left-alliance majority seems remote. Given this, voters who traditionally voted for the Left Front face a dilemma in this election. And, how they choose to vote will have an impact on the outcome of this election.

The decline of the Left

The main beneficiary of the Left’s electoral decline – in terms of seats as well as vote share – has been the TMC. While the number of assembly seats won by the BJP remains negligible (from zero to three), their vote share has risen steadily from less than 2% in 2006 to 10.16% in 2016. The Congress benefited from the anti-incumbency wave in 2011, when it was in an electoral alliance with the TMC, doubling its tally of seats from 21 to 42 between 2006 and 2011. In 2016, the Congress improved its seat tally marginally (44 seats) – and while not in a direct alliance, had a pre-electoral seat understanding with the Left – but their overall vote share did not improve.

The decline of the Left is more vividly seen in the results of the parliamentary elections – from 35 seats in 2004, it has fallen to zero in 2019. The TMC has been the main beneficiary of the decline, with the number of seats won by it going up from two in 2004 to 34 in 2014, and then falling to 22 in 2019. The BJP has increased its tally from zero in 2004 to 18 in 2019. The rise of the BJP in West Bengal politics is most dramatically seen by its vote share in the parliamentary elections – from single digits in 2001 and 2006, they received more than 40% of votes in 2019, clearly establishing themselves as the main rival to the TMC.

What these numbers suggest is that, while some voters are clearly committed to specific parties, a large fraction of the voters are floating or swing voters. Depending on the specific election, they can switch their allegiance from one party to another. For example, the dramatic rise in BJP votes in the parliamentary elections in 2019 suggests that some who voted for the Left in earlier elections switched their votes as a form of protest against the TMC. But this is not a matter of one-way traffic, or even two-way traffic along a single street.

Also, with a section of TMC leaders (including MLAs and municipality councillors) joining the BJP in recent months, it is clear now that this gain in vote share (for the BJP) had many tributaries.

Coming back to the present election, a voter’s choice will clearly be driven by many factors. To start with, the considerations in an assembly election and parliamentary elections or a panchayat election are not the same and the same voter can vote differently in these elections. Still, two factors play a big role – ideology and incumbency.

Voters show their ID cards as they arrive to cast their votes during the second phase of West Bengal Assembly polls, in Nandigram, Thursday, April 1, 2021. Photo: PTI/Ashok Bhaumik

Committed versus swing voters, pro versus anti-incumbency voters – all this is straightforward enough, but a triangular contest raises some interesting possibilities.

Take for example, Left-leaning voters as opposed to committed Left voters. They would have voted for the Left if the Left had a chance to come into power but are now in a dilemma. In a triangular contest, their relative dislike for the two remaining alternatives – the TMC and the BJP – will decide who they vote for. But the trouble is, their assessment of whether the general voting trend favours the TMC or the BJP might also play a role.

Consider the example of Left-leaning voters who are opposed to both the TMC and the BJP but suppose that their aversion to the BJP is more intense. By voting for the Left-alliance they will potentially split the anti-BJP vote and effectively help the BJP, which is not a desired outcome for them. The same argument applies to Left-leaning voters who are more vehemently opposed to the TMC than the BJP because of state-level anti-incumbency factors or direct political conflicts. By voting for the Left-alliance they will split the anti-TMC vote and de facto help the TMC.

Then should such voters hold their noses and vote for their second preferences? That would be the logic of the “lesser evil”. Take the example of Left-leaning voters who are in the “No Vote to BJP” camp but are opposed to the TMC as well. If they voted their second preference, namely, the TMC and then the TMC wins comfortably, they might regret this – such voters do not like the TMC and so voting for them is not an easy decision.

Moreover, by not voting for their first preference, the vote share of the Left alliance would be much lower than what it could have been, which might make them appear irrelevant in state politics. For such voters, this is not a desirable outcome at all. However, there is a scenario where this strategy makes sense – if the TMC wins or loses narrowly, they might take some satisfaction that their vote was consequential in preventing the least-desired outcome or at least did not help the BJP win. The same logic applies to Left-leaning voters who are vehemently anti-TMC and while they oppose the BJP too, given a choice between the two would go for the latter.

What do we learn from this? It is not for us to advise anyone how to vote and our goal was really to understand the dilemma that Left-leaning voters are facing. They can vote their first preference or their second preference and there are scenarios when both can be rationalised. But since it is always hard to guess the preferences of other voters and read the electoral trends correctly, this makes it a really difficult task. There were definitely winds of anti-incumbency in 2011, but that was not a triangular contest, which made the choice of all voters much easier – either vote for the party that is your top choice or vote for change. In a triangular contest like this one, this is what makes predicting the likely outcome as well as the dilemma of Left-leaning voters much harder.

Maitreesh Ghatak teaches at the London School of Economics. Bishan Basu is head, department of radiotherapy, Calcutta National Medical College, Kolkata. He is also an essayist and a public health activist.