While BJP Goes All Out to Consolidate Strength in Bengal, TMC Appears at a Loss

Post-poll clashes and the Centre-state war will likely intensify in the days to come. 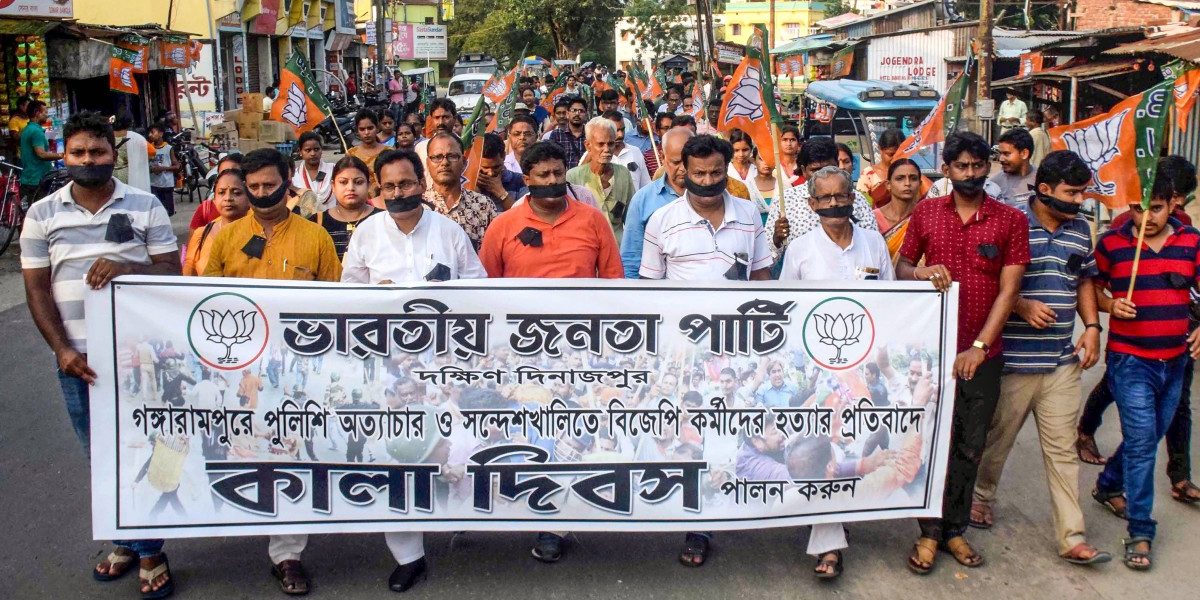 There has barely been a quiet moment in West Bengal after the 2019 Lok Sabha elections.

The Bharatiya Janata Party broke the Mamata Banerjee-led Trinamool Congress’s iron-like grip over the state, winning in 18 of the 42 constituencies.

Since then, scattered incidents of violence between workers of both parties have the dominated news, leading to speculation that the Centre may be looking to impose president’s rule in the state.

None other than governor and former BJP leader Keshari Nath Tripathi said that if the law and order situation further deteriorates, the Centre may need to invoke Article 356 of the constitution.

Chief minister Mamata Banerjee, however, saw a saffron conspiracy to dislodge an elected government in the governor’s remark. She alleged that imposing president’s rule in the state would be the real constitutional breakdown.

Is Banerjee losing her grip over the state’s polity? Or is it, as she says, that the news channels, which she perceives to be pro-Centre, are blowing up Bengal’s sporadic incidents of violence while ignoring such cases in BJP-ruled states?

The answer, perhaps, lies somewhere in the middle.

The renewed clash between the state and the Centre was triggered by clashes between the TMC and BJP in North 24 Parganas, more specifically the Basirhat constituency, where the ruling party’s Nusrat Jahan defeated BJP’s Sayantan Basu by a massive margin. The clashes last week in Sandeshkhali and Kankinara areas of Basirhat claimed the lives of workers from both parties.

After that, the tensions have only escalated. The BJP carried out a bandh, blocked roads and held protests across the state. It attempted to take out funeral processions for the slain workers, which the police had to stop. Most of its top leaders congregated in Basirhat to take stock of the situation and highlighted what they called a “failing law and order situation” on different public platforms.

Leaders like Mukul Roy and Babul Supriyo claimed that the chief minister was “directly responsible” for such blatant attacks on BJP activists. They claimed that the clashes erupted after TMC workers allegedly tried to remove the saffron party’s flags in Sandeshkhali.

In its defence, the TMC said that BJP workers were the ones who tried to deface party flags and disrupt a meeting of local TMC leaders. Trouble was brewing in the area already when a senior government official was beaten up, allegedly by BJP activists.

The state government rushed the riot police to the area, which controlled the clashes.

By this time, however, the Union home ministry had quickly dispatched an advisory to the state government expressing “deep concern” over the attack on BJP activists, and asked it to maintain law and order. The West Bengal government responded that the situation was “under control” and law enforcement agencies in the state were on alert.

The war of words between the two parties further aggravated when the governor did not rule out president’s rule in the state in an interview.

Banerjee soon accused the BJP of spreading “false information as part of a game plan to topple her government”. She felt that the Centre was misusing its power to throttle her voice, as it knows that she is “the only person in the country to raise voice against them”. She said that the Centre wanted to turn Bengal into another Gujarat by creating unrest in the state.

Bengal BJP leaders, including national general secretary in-charge of the state Kailash Vijayvargiya, however, said that they did not want the Centre to impose president’s rule but want to exercise their democratic right to hold victory processions. Vijayvargiya alleged that the state government had barred them from doing so and his party will defy that order.

What is clear is that the BJP, having made significant inroads in the state, wants to further consolidate its strength while the TMC is at a loss over how to cap the saffron party. 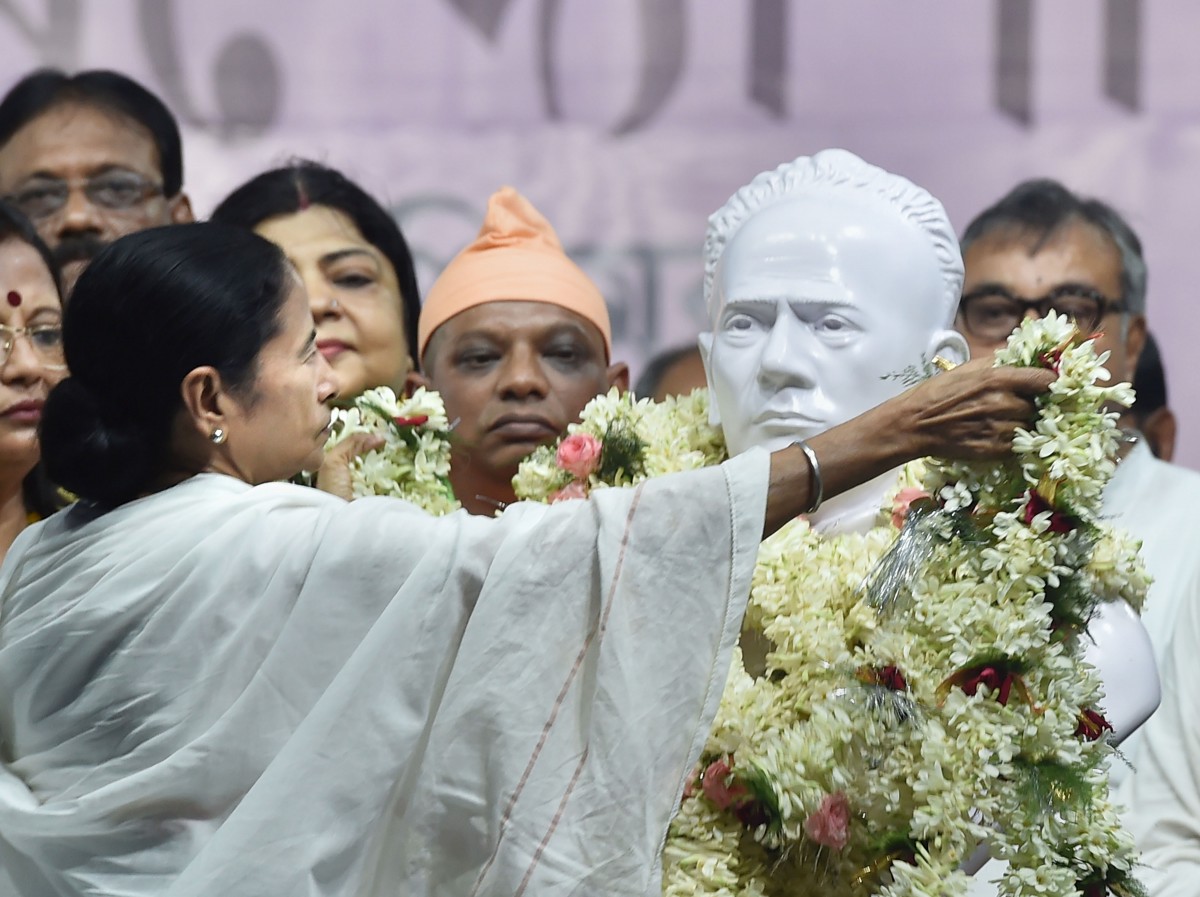 Mamata Banerjee reinstalling the statue of Vidyasagar that was desecrated during poll violence. Image: PTI

Garga Chatterjee, a TMC sympathiser, told a news channel that the violence in Bengal is being disproportionately blown up. “The Election Commission of India sought re-polling in only eight booths out of more than 60,000 in the state. Had the matters been so worse as is being projected, the ECI would have noticed it (sic).” He added that the BJP was using its money power to buy goons across the state to provoke and combat TMC workers on the ground.

The BJP, however, looks more determined.

Consider this. On June 11, junior doctors in all West Bengal state-run medical institutions went on an indefinite strike after one of them was assaulted by relatives of a patient who died at the NRS medical college and hospital in Kolkata.

Sensing a chance to benefit from the situation politically, the BJP sent an entourage of its leaders to grieve with the striking doctors. As this happened, the right-wing ecosystem on social media ran a simultaneous aggressive campaign against the TMC government for “protecting Muslims”.

It so happens that the doctor who is now in a critical condition is a Hindu and the alleged attackers were Muslims.

This happened despite the fact that the state government attempted to douse the anger almost immediately by deploying security to the hospital and sending the West Bengal Medical Council president and Trinamool MLA Nirmal Maji to persuade the doctors to resume work. Maji also said that the doctors’ demands will be resolved as quickly as possible.

The Bengal BJP unit is currently against president’s rule, as the move may crack the growing sympathy for the party. The Centre too will weigh such factors before invoking Article 356 in the state.

However, given the next assembly elections are due two years from now, in 2021, the clashes between the TMC and a resolute BJP are only expected to gather more steam in the days to come.

The TMC is solidly making this political war into a polarised Bengali versus non-Bengali debate, with the saffron party representing the latter. The rush with which Banerjee reinstalled the desecrated statue of Bengali Renaissance icon Ishwar Chandra Vidyasagar on June 11 is a case in point.

The BJP, in contrast, is building its campaign on a range of issues. It is trying to use the vocal ‘upper’ caste, traditionally privileged Hindus to garner the support of a large section of the poor. The issues they are raising include a convoluted cocktail of charges against the TMC government – corruption and authoritarianism topped with the overarching talk of “minority appeasement”.

In the process, the Muslim voice, which has only just begun to assert itself politically and socially in the bhadralok-dominated state, could be the biggest casualty.