They also took this opportunity to justify the CAA, even though the law only applies to those who entered India before December 31, 2014. 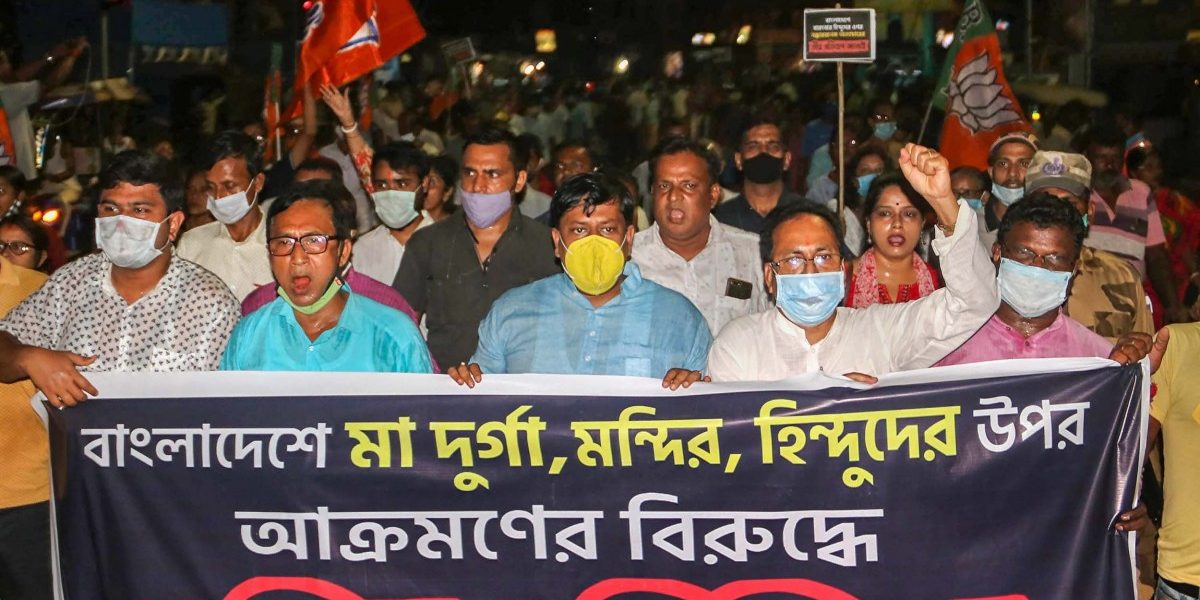 Kolkata: The recent spate of communal violence in parts of Bangladesh last week has spilled over to West Bengal, as many Bharatiya Janata Party (BJP) leaders are using the attacks on the Hindu minority in Bangladesh as a polarising election issue ahead of the upcoming assembly by-polls. They are also arguing that this violence justifies the controversial Citizenship (Amendment) Act passed by the Narendra Modi government in 2019.

Last Wednesday, communal violence flared up in parts of Cumilla and Noakhali districts in Bangladesh after allegations that the Islamic holy book was desecrated. At least seven people died.

On Friday, the violence spread to several other districts of Bangladesh, including the capital Dhaka. On Friday afternoon, the final day of Durga Puja, an unruly mob of hundreds stormed into the Bijoya Durga Temple in Noakhali district’s Begumganj.

According to the reports from Bangladeshi dailies, at least 10 temples were vandalised, over 50 Durga idols were desecrated and hundreds of shops and houses belonging to minority communities were looted and set on fire in various locations. The Bangladesh administration took action against the perpetrators; police, Rapid Action Battalion (RAB) and Border Guard Bangladesh (BGB) personnel were deployed to bring the situation under control.

Four Muslims were gunned down by law the enforcement agencies after a violent clash took place in Hajiganj of Chandpur. Clashes broke out in Feni district too, leaving 40 injured including officer in-charge (OC) of Feni Model police station, Nizam Uddin.

Violence broke out first in Cumilla district as a rumour was spread that a Quran had been placed on the knee of a statue of Hanuman, in an unidentified Durga Puja pandal. This rumour has not yet not corroborated by the law enforcement agencies.

Prime Minister Sheikh Hasina on Friday issued a statement saying, “A thorough investigation is underway. We will definitely trace those who carry out such incidents. Nobody will be spared. It doesn’t matter which religion they belong to. They will be hunted down and punished. We want such punishments so that no one dares to do so in the future. Religion is private and the festival is for all and we enjoy every festival together. Some people are religiously blind and they always want to create communal conflicts. Such people belong not only to the Muslim community, but also to all other religions.”

Even after the prime minister’s assurance and the large deployment of security personnel, reports of attacks kept coming even on Sunday. The situation in Rangpur has become tense since Sunday evening.

Also read: Mamata Banerjee’s Bold But Risky Strategy to Position Herself as the Natural Choice to Take on Narendra Modi in 2024

While Bangladesh struggles to curtail and deal with this violence, a section of BJP leaders is using it as a tool ahead of the by-elections in West Bengal slated for October 30. BJP leader and leader of the opposition in the West Bengal assembly Suvendu Adhikari on October 14 wrote to Prime Minister Narendra Modi requesting the Union government to take “urgent steps” to provide relief to the “Sanatani (Hindu) people” of Bangladesh.

The saffron party’s national in-charge IT Amit Malviya tweeted saying, “The impunity with which religious freedom of Hindus in Bangladesh is being trampled, reiterates the importance of CAA, a humanitarian legislation. Mamata Banerjee’s opposition to CAA and studied silence now should worry Hindus of WB, who too are facing marginalisation under TMC.”

Malviya did not care to clarify, though, that the CAA would mean nothing to minorities facing persecution in Bangladesh today – it applies only to those who entered India before December 31, 2014.

Senior BJP leader and former governor of Meghalaya Tathagata Roy said, “Denial of Newton’s Third Law of Motion in the name of secularism will not make it disappear. Pretending that a dormant volcano is dead will not kill it. It will erupt in its own good time.”

Former Bengal state president Dilip Ghosh tweeted a video saying, “Those who are concerned about the mob attack on Durga Puja in Bangladesh, are they aware that here in West Bengal East Medinipur district’s Egra Central Bus Stand’s Durga Puja also encountered similar violence as in Bangladesh? To bury the incident, State Police & administrative authorities reached there and arranged for the idol immersion. So, is West Bengal moving towards Bangladesh?”

A news agency on Sunday reported that a group of people hurled crude bombs and vandalised vehicles after immersion of Durga idol in Annapurna area of Durgapur. Soon, many in social media linked the incident with that of Bangladesh’s. The social media handle of the Purba (East) Medinipur District Police said, “There are attempts to communalise this incident. One child has been identified as a member of a Hindu family. Strict legal action will be taken against those who spread fake news.”

Asansol-Durgapur police clarified that “some people are spreading wrong information that bombs were hurled at puja pandals and damage is done giving communal colour and trying to disturb peace in the area. Strong legal action will be taken for spreading such wrong and misleading information.” The police further said that “Yesterday evening an incident took place at Annapurna Nagar, Durgapur over the issue of asking money for liquor. Over this incident, a specific case is started and legal action is initiated.”

Several right-wing social media handles jumped into the fray with provoking statements. Twitter hashtags like #SaveBangladeshiHindus were trending on Saturday, where most of tweets were put out by BJP supporters in India.

A social media handle named “Jugantar” tweeted, “This needs to be fought on the streets. We need another Advani jee, Ashok Singhal jee likes to reignite the fire among us.” Another Twitter handle, ‘Pro Master VIP’, tweeted, “Pls my dear Sanatani brothers and sisters wake up and raise your voice against Communal Attacks on Hindus. Otherwise, WB will become the next Pakistan.”

Many people on social media opined that the attack on Hindus in Bangladesh proves why the CAA and National Register Citizens (NRC) needs urgent implementation in India.

The Matuas are a close-knit group in the state belonging to the Namashudra (Dalit/SC) community, who migrated from Bangladesh to Bengal during and after Partition. They are heavily dependent on the CAA. The community sided with the BJP in the last Lok Sabha and state assembly elections, which resulted in a win for the saffron party in the seats which have the highest concentration of Matuas.

Speaking to a reporter on Sunday evening, Adhikari said, “After the Bangladesh incident, BJP will win the Shantipur by-election with 3X margin than last time.” By-polls are going to be held for four assembly seats in West Bengal on October 30. BJP workers took out small protest marches in various cities and towns including Kolkata to condemn attacks on Hindus in Bangladesh.

Also read: With ‘Duare Sarkar’ Camps, the TMC Has Tamed the Menace of ‘Cut Money’

On the other hand, Abbas Siddiqui, cleric of the prominent religious shrine Furfura Sharif and founder of the Indian Secular Front (ISF), stoked controversy by commenting on the Bangladesh violence.

While speaking at Jalsha (religious gathering) on October 14, he said, “Some people crossed all limits of shamelessness. I saw on the internet that in Bangladesh someone kept our holy book on the knee of Hanuman. But the sad part here is that people who protested against this were punished…I can still accept atrocities against me, I can still accept false cases slapped on me, but we will not tolerate insult against Islam, Quran, Allah. If needed we will give our life for this or will take life (kill) for this… If you think you have freedom to insult Quran or speak against Islam, then I Abbas Siddiqui have the freedom to behead you.”

As soon as the video went viral on social media, criticism poured in from all quarters. Another video of the cleric emerged, where he demanded strict punishment for those who attacked the Hindus in Bangladesh and said, “Criminals don’t have any religion.”

Soon after, Siddiqui’s brother Nawsad Siddique, the lone MLA from the ISF, wrote a letter to Bangladeshi Prime Minister Sheikh Hasina seeking a probe into the incident and urged stern action against the perpetrators.