Bengal: Activists, Including Those Mamata Jailed Under UAPA, Say BJP Is ‘Principal Danger’

A group of civil society persons, including artists, scholars, human rights and cultural activists, have launched a campaign called “No vote to BJP”. 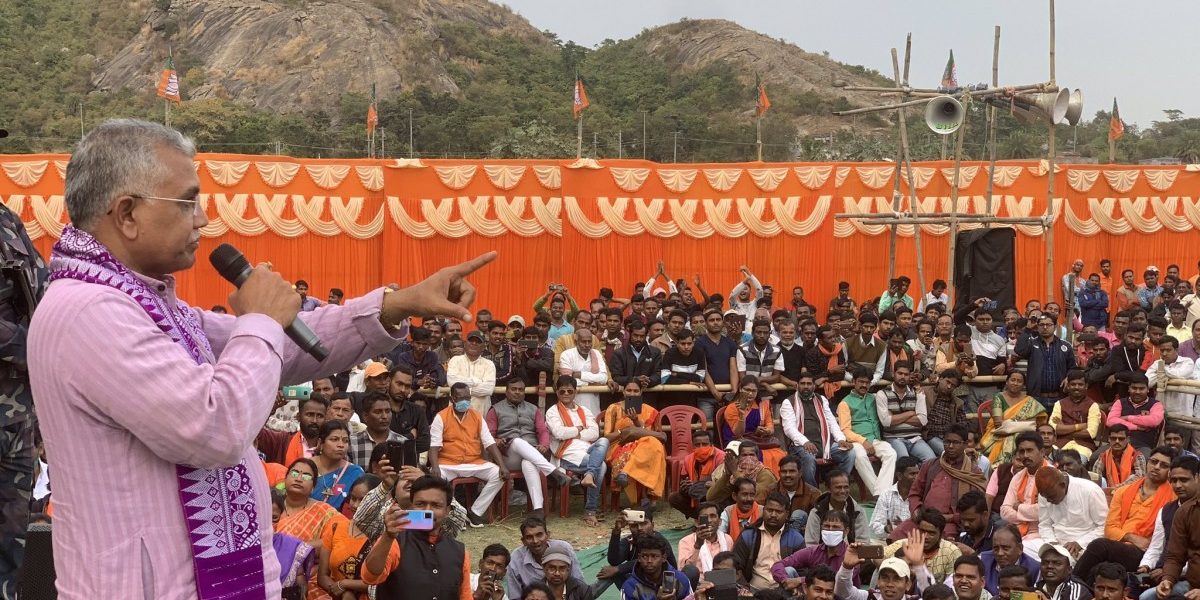 Kolkata: Sharmistha Choudhury spent more than six months in jail after the Mamata Banerjee government charged her under sections of the Unlawful Activities (Prevention) Act (UAPA) for her participation in the land agitation in Bhangar near Kolkata. Sankar Das, another senior organiser of the movement, was also charged under sections of the UAPA and spent three and a half months in jail in 2017 and another two months in connection with another case in 2018.

Leaving their bitter struggle with the TMC aside, the likes of Chowdhury and Das have joined a group of civil society persons, including artists, scholars, human rights and cultural activists, to launch a campaign called “No vote to BJP”.

“If the TMC is a bunch of thieves, the BJP is a gang of dacoits. We need to understand this reality. There is no place for personal vendetta. It’s a question of a broader political perspective,” said Choudhury, a central committee member of the Naxalite organisation CPI(ML) (Red Star). Das is a leader of the same party.

“Right now, I am in north Bengal after TMC activists vandalised one of our trade union offices in South Dinajpur district. We are fighting the TMC. Despite that, our call to the people is that vote for whoever you want to, be it the TMC, the CPI(M) or the Congress, but cast no votes in favour of the BJP,” Choudhury said.

These civil rights activists gathered at an auditorium in Kolkata on Monday at the call of 35 convenors, including noted human rights activist Sujato Bhadra and identified the BJP as a ‘fascist force’, resisting which was the topmost political priority. They addressed a press conference on Wednesday elaborating their future programmes, which include carrying out campaign in the districts.

Those who have become part of the ‘no vote to BJP’ campaign include members of the CPI(ML) (Red Star), leftist organisation Mazdoor Kranti Parishad (MKP) and Bengali ethnic organisation Bangla Sanskriti Mancha.

All these people have come to the decision that resisting the BJP is the primary aim as it is “a greater danger than the TMC, or any other party for that matter”.

The collective leadership of the campaign has a broad leftist orientation but are not associated with the Left Front, of which the CPI(M) is the principal component.

According to scholar and cultural activist Kasturi Basu, the collective includes victims of the TMC regime’s highhandedness as also those of the Left regime’s imperiousness.

“The ‘no vote to BJP’ campaign has victims of the Left’s atrocities and the TMC’s atrocities. But we felt that we needed to consider the greater danger, which is undoubtedly the BJP. The BJP cannot be compared with any other party. So, our call is simply, vote for anyone you want to, but not for the BJP,” Basu said.

The campaigners also include filmmaker Aniket Chattopadhyay and mental health activist Mohit Ranadip, among others.

A Facebook group titled No Vote to BJP was created on December 31 and it got more than 4,000 members in the first five days.

In Bengal, whether the BJP is a greater danger that the TMC has been a subject of heated debate among the leftist camp, as the CPI(M)-led Left Front equated the TMC with the BJP, while Naxalite parties like the CPI(ML)(Liberation) argued that the BJP had to be the principal enemy. The CPI(ML)(Liberation)’s Bengal leadership had even criticised the CPI(M) for targeting the TMC more than the BJP.

After the 2019 Lok Sabha elections witnessed a swing of traditional leftist votes in favour of the BJP en masse, the CPI(M)’s leadership alleged that the TMC’s atrocities on Left workers and leaders had forced people to vote for the BJP, the party which held power at the Centre and enjoyed influence over central agencies.

“The TMC is the reason why the BJP rose in Bengal and the BJP cannot be fought without defeating the TMC” has been a central argument of the CPI(M) leadership.

Here, the members of the ‘no vote to BJP’ campaign argue that the TMC’s “dictatorial approach and boundless corruption” was a cause of concern for the common people and needed to be fought against, but that fight should not be at the cost of helping the BJP come to power.

According to Bhadra, “No parliamentary party can be equated with the BJP, as it is a wing of the Rashtriya Swayamsevak Sangh that believes in and propagates the ideology of Hitler and Mussolini. The BJP practices Fabio-fascism, which is to get to power legally, using various methods, and then subvert the whole system. The BJP is a party with a difference in all negative senses and that’s why our central call is that vote for any party you want, except the BJP.”

He said that this electoral campaign was only the beginning of a long-term campaign against fascism. “All other party, the Left, the Congress and even the TMC has a history of leading mass movements. But the BJP’s only history is of organising mass murders. We can compare between other political parties but the BJP needs to be singled out as an exception,” he said.

Leaders of the CPI(M) and the TMC did not want to comment on this civil society initiative.

“What importance does Sujato Bhadra’s appeal hold? We don’t think anyone is going to care about what these civil society members are calling for. This has no political importance whatsoever,” said Rantidev Sengupta, the convenor of Bengal BJP’s intellectual cell.